Singing for Inclusivity in Turkey

MERSIN, Turkey—In 2016, in the Turkish coastal city of Mersin, a LGBTQ pride choir performed for thousands of people. It was the first time such a concert had ever been organized in the city. Yeliz Guzel, a woman who aspired to bring change to her country, was a founding member of the group, and she did everything in her capacity to make it happen

But soon facing pressure from her town, she left the group.

“Because of my beliefs, my life turned upside down,” Guzel, who is a firm advocate of gender equality, said in November 2020. She smiled while she practiced the baglama, a kind of lute, on the balcony of her one-room apartment in a rusty old building in the city center.

The 42-year-old artist who made news while creating Turkey’s first and only LGBTQ choir, Yedi Renk Koro (“Seven Colors Choir”), is now alone. But Guzel, which means beautiful in Turkish, said that “no level of suppression can ever silence me or stop me from believing in what I believe in.” 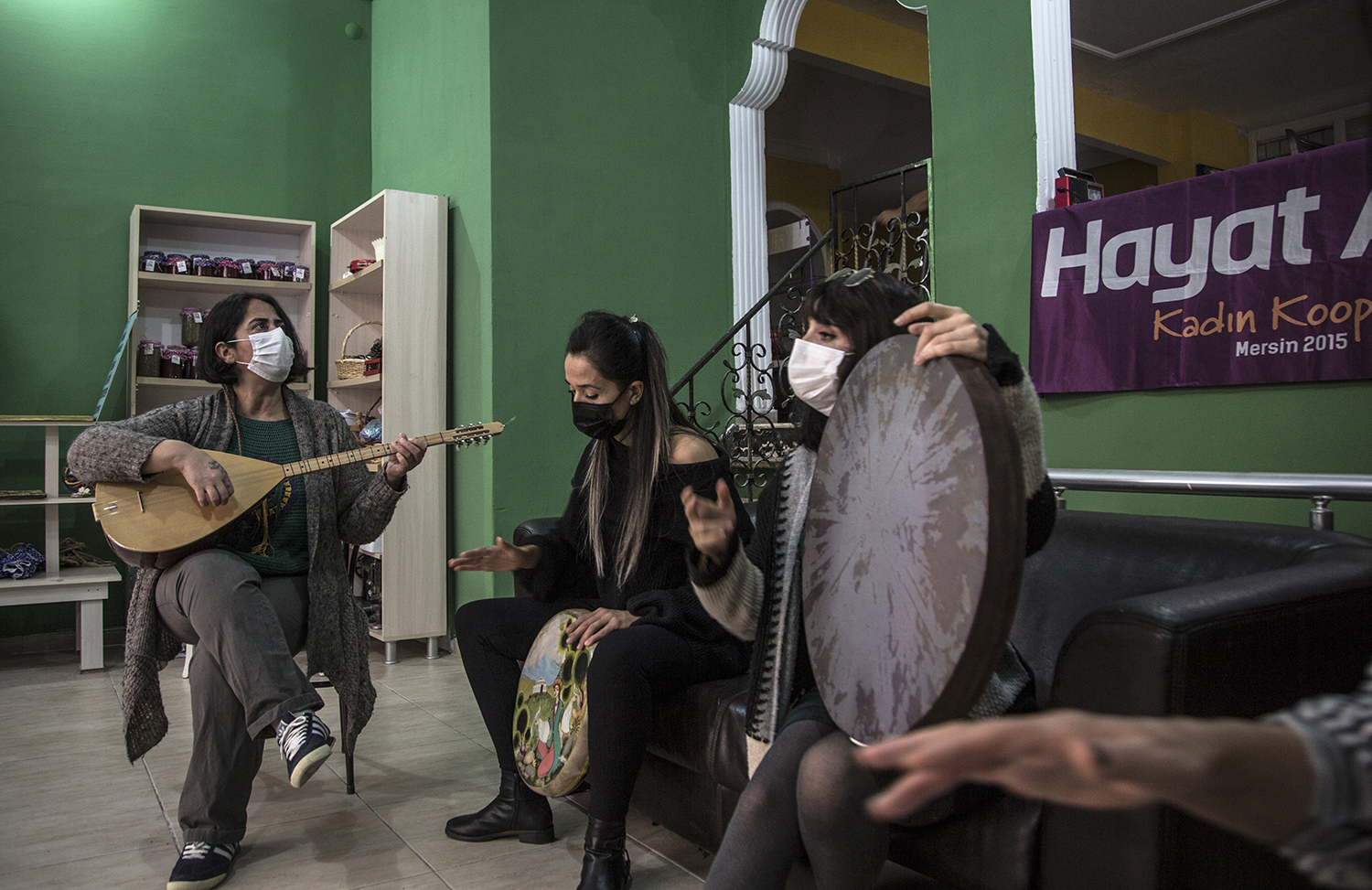 Guzel practices with the members of her group in a makeshift space in the city center of Mersin on Nov. 23, 2020. Ahmer Khan for Foreign Policy

When Guzel grew up, Mersin was even more conservative than it is now. Hatred against people with different sexual orientations ran deep. These days, although people aren’t as openly hostile to LGBTQ individuals, inclusion events have been systematically prevented.

Curious about music as a child, Guzel picked up her craft by watching her brothers play musical instruments at her home. She used to create her own compositions as a child using kitchenware. “In a patriarchal setup, you do not have the luxury to opt for your passion,” she said as she recalled her childhood. Without any formal training or education in music, Guzel eventually became a paid musician and started her own music school in Mersin.

With hundreds of students enrolled, she mainly trained students in the baglama and drums. In those days, she admitted, she was homophobic herself and largely avoided politics at her school. But later, she changed her tune.

“I just wanted to help people come over the dilemma of identities and traumas that one goes through in societies such as ours where conservative people dominate. Sexuality and geography must not confine people within certain definitions. My attempt was to erase those binaries.” And that is where the idea of the LGBTQ choir came from.

After the choir performed a few concerts, her world started to fall apart. She found no one to sponsor the choir, and people stopped sending kids to her school. She also started receiving disturbing phone calls. “I was threatened that I will be killed on the road. … I would laugh at such calls.” But it was harder to take when her own friends abandoned her. “They asked me to leave the group,” she recalled. Facing financial trouble, she left.

She even faced turmoil in her personal life. Married for almost nine years, Guzel ended her marriage, which she said was a happy one, in 2018. “When I met people of different identities, my perspective about life broadened. Through conversations with the choir members, I started to question my own sexuality and realized that maybe I was not just attracted to men,” she said.

“Thankfully, there are a few women who have been by my side since I started teaching music,” she said. “I got up again and started this new group with an even wider space for everyone.” The new group is called Renkler ve Diller Korosu (“Colors and Languages Choir”), and it is for women from diverse backgrounds—and anyone else who wants to join. “Rebuilding the confidence of those who have been victimized by one way or the other is the motto of my new space.” 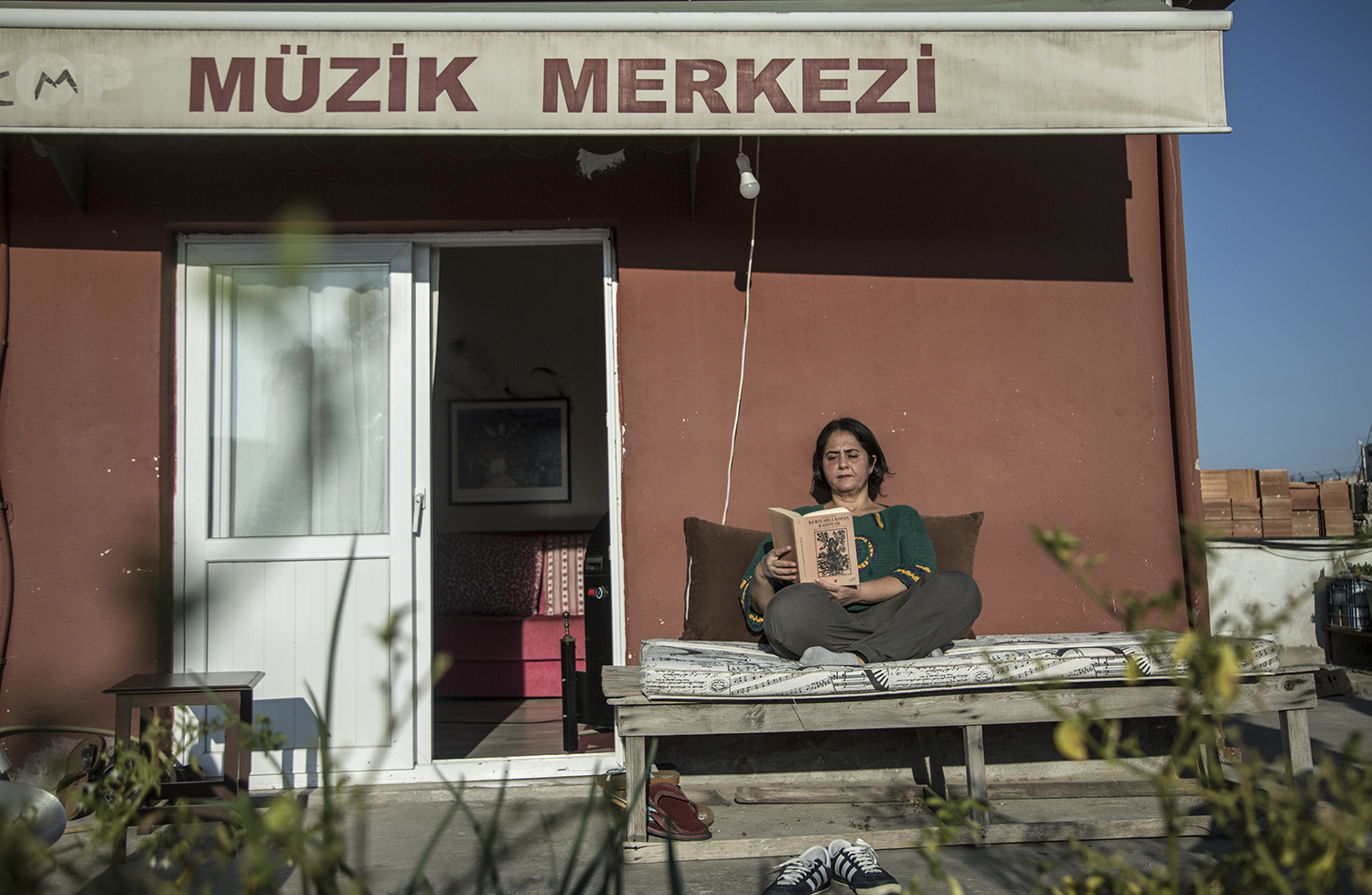 Guzel reads a book on the balcony of her apartment on the rooftop of an old rusty building in Mersin on Nov. 23, 2020. Ahmer Khan for Foreign Policy

On Nov. 25, 2020, on which Turkey marked a day for the elimination of violence against women, four women from her group did a poetry session and musical performances to raise awareness. In their art, Guzel hoped they’ll be able to express things they’ve never been able to before.

Stuck at home due to the pandemic, Guzel now teaches music to around 20 students online. Apart from that, she spends most of her time with the new choir. The group still meets two or three times a week in a borrowed space for practice. After the pandemic, she hopes to turn it into a larger platform.

A member of her group who is in her 50s said she loves to play rhythm on the drums, but she misses the longer sessions that they used to do before COVID-19 changed things. Another member, a 24-year-old English teacher, said she found out about the group on social media and was immediately attracted to the concept. “I had not seen or heard of a similar space before. When I learned how progressive this group is, I joined happily.”

Guzel dreams of creating a space where nobody is excluded. “Through music, I want to reach out to people with the same message of spreading tolerance.” Apart from a few cities, such liberal spaces are rarely found in Turkey.

The Erdogan regime has gotten used to controlling the country’s social institutions, but university students have had enough.

The Real Reason the United States Lags on LGBTQ Rights

This week’s Supreme Court decision ends one legal battle, but reveals why the country’s record is so poor.

The Erdogan regime has gotten used to controlling the country’s social institutions, but university students have had enough.

The Real Reason the United States Lags on LGBTQ Rights

This week’s Supreme Court decision ends one legal battle, but reveals why the country’s record is so poor.