After this week’s election, the country’s oil-fueled model of growth is facing a reckoning.

The highlights this week: Lessons from anti-extractivism’s strong showing in Ecuador’s polls, a historic step on Venezuelan refugees in Colombia, and Cuba’s new move toward economic opening.

The highlights this week: Lessons from anti-extractivism’s strong showing in Ecuador’s polls, a historic step on Venezuelan refugees in Colombia, and Cuba’s new move toward economic opening.

The big surprise of Ecuador’s first-round presidential vote was the better-than-expected performance of environmental lawyer Yaku Pérez. Although most polls predicted that leftist economist Andrés Arauz and conservative banker Guillermo Lasso would easily make it to the runoff, by Thursday, Lasso had only edged ahead of Pérez for second place by 0.2 percent of the popular vote with more than 98 percent of votes tallied. Pérez, alleging fraud, called for a recount of seven provinces.

Pérez’s strong performance was echoed at the congressional level: His party, Pachakutik, which represents Ecuador’s Indigenous movement, jumped from five to 27 seats in the country’s 137-seat legislature. The largest legislative bloc, with 49 seats, will be economist Arauz’s political group.

Pérez and his party identify as a new kind of left: ecological and anti-extractivist. They stand against the type of left-wing politics embraced by former President Rafael Correa (Arauz is Correa’s protege), who embraced petroleum-led growth and greenlit oil drilling on Indigenous and other environmentally protected land.

With its bigger congressional bloc, Pachakutik is posed to push for more consultation of local communities on oil and mining projects and for a wider transition to renewable energy. In this effort, Pachakutik Congress members will have allies; center-left businessman Xavier Hervas, who also pulled off an unexpectedly strong fourth-place finish in the presidential race, called for similar measures, and his party won 18 legislative seats.

The debate on the future of Ecuador’s energy sector has far-reaching relevance. Like Ecuador’s, many Latin American state budgets are partially funded by oil revenues put at risk by the coming energy transition. For Ecuador’s part, around 20 percent of its government revenues come from oil, which also accounts for around 40 percent of its export earnings.

Spotlight on energy transitions. During his presidential campaign, Pérez argued for strengthening Ecuador’s capacity in wind, solar, biogas, and biomass energy. While biomass accounted for 1.7 percent of the country’s energy capacity as of 2018, the other three sources combined accounted for less than 1 percent.

Sustainable growth in those areas will require mass workforce retraining along with policies that promote demand for renewable technologies in both the public and private sectors, London School of Economics economist Amir Lebdioui, who studies Ecuador’s energy transition, told me this week.

If Latin American governments have the political will, Lebdioui said, they could also do more to create a strong regional supply chain for renewables. As one example, Ecuador, the world’s top exporter of balsa wood for wind turbines (mostly to China), could explore more trade and investment with Brazil, where domestic firms manufacture turbines, and Chile, where considerable investments in wind energy are planned.

A reshaped political landscape. In the coming days, Ecuador’s attention will be focused on a potential audit of the election. But in the medium term, Ecuadorian voters have shown not only that they prefer left-wing politicians over right, but that they are interested in greener economic models as well.

Any politician, including Arauz or Lasso, could choose to embrace those models. One lesson of the Feb. 7 vote is that doing so could help keep them relevant.

Monday, Feb. 15: The World Trade Organization holds a special general council meeting to announce its new director-general. Brazilian diplomat Roberto Azevêdo stepped down from the position in August 2020, and former Nigerian Finance Minister Ngozi Okonjo-Iweala is the only candidate to replace him.

Cuba’s economic spring. Only 13 percent of Cuba’s labor force works in private businesses, because until now, only 127 private sector activities were permitted by the government. The country announced it will expand that list to include more than 2,000 activities. The decision marks the continuation of an economic opening that has also included the end of Cuba’s dual-currency system.

Bullish on Latin America. Japanese conglomerate Softbank plans to invest around $1 billion in Latin America in 2021, Bloomberg reports. For context, total venture capital funding in the region in 2019 was $4.6 billion. So far, Softbank has pumped $2.3 billion into Latin American companies since 2019. This year, it is especially eyeing agricultural tech firms, manager Paulo Passoni said.

Safe third country agreements scrapped. Washington announced it will end agreements with El Salvador, Guatemala, and Honduras that required some migrants seeking asylum in the United States to first apply for protection in those countries. Guatemala was the only country to have implemented the agreement. Since November 2019, the United States has sent at least 945 asylum-seekers there.

Bukele snubbed in DC. Biden administration officials told The Associated Press they turned down a last-minute meeting request with El Salvador President Nayib Bukele so as not to appear supportive of him ahead of Feb. 28 legislative elections. Bukele closely aligned himself with former U.S. President Donald Trump but has faced scrutiny over his hard-line security policies.

How Chile shot ahead. Chile gave its millionth jab against COVID-19 this week in a campaign that has administered more doses per capita—over 5 per 100—than any other country in the region. Its government secured vaccine deals with four manufacturers and has relied on the country’s primary health care system for distribution.

Haiti’s political crisis continues to deepen, with government authorities arresting 23 people accused by President Jovenel Moïse of plotting a coup. One was a Supreme Court judge who, along with two fellow justices, had been tapped by the opposition as a possible leader of a transition government. On Monday, Moïse removed the three justices from the court by decree. Meanwhile, widespread street protests continue.

The unrest comes on what anniversary of the popular uprising that contributed to dictator Jean-Claude “Baby Doc” Duvalier’s ouster? 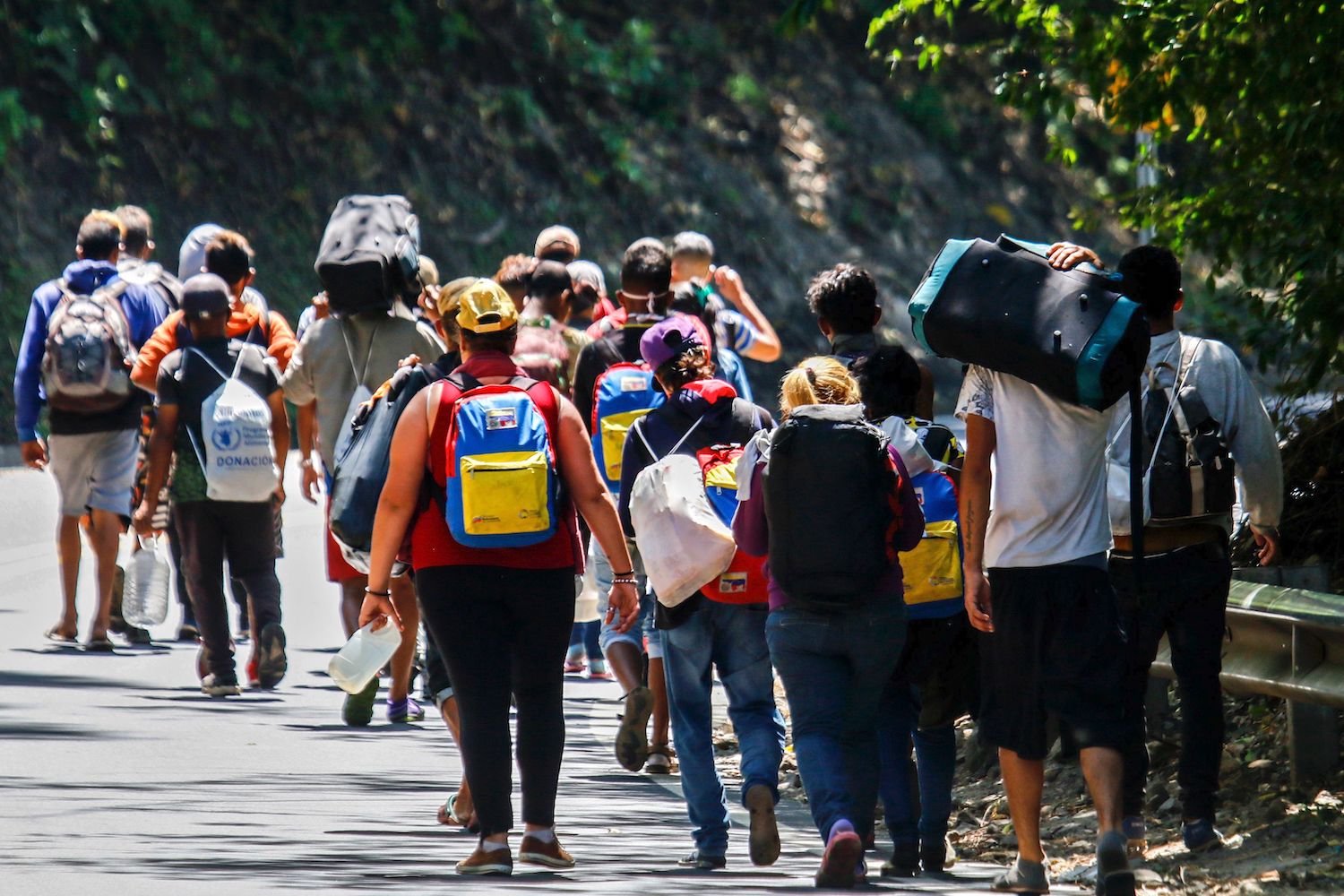 Venezuelan migrants walk along a highway in Cúcuta, Colombia, on the border with Venezuela, on Feb. 2.Schneyder Mendoza/AFP/Getty Images

Colombia will offer a 10-year protected status to all Venezuelans who were in the country before Jan. 31, 2021. The move will allow some 966,000 irregular migrants to work legally and receive COVID-19 vaccines. U.N. refugee chief Filippo Grandi said it was “a humanitarian gesture of unprecedented scale in the region—and the entire world.”

Including already-regularized migrants, Colombia is home to more than a third of the estimated 4.6 million Venezuelans who have fled their country’s political and economic crisis for other parts of Latin America and the Caribbean.

Beyond bureaucratic struggles, the migrants face discrimination from Colombians, two-thirds of whom have an unfavorable opinion of Venezuelans in the country, according to pollster Invamer.

The upside for Duque. The announcement earned Colombian President Iván Duque international praise during a period of criticism over killings of Colombian civil social leaders and a previous declaration that undocumented migrants would not be vaccinated. It also gave him political space to ask for more international aid to deal with Venezuelan migrants.

Regional ripples? Duque said that he hopes other Latin American nations follow suit. For many, doing so would be a policy U-turn. Chile is in the midst of a crackdown against illegal immigration on its northern border, and in January, Peru sent tanks and troops to prevent migrants from entering the country illegally over the border with Ecuador.

Baby Doc fled Haiti in a U.S. Air Force plane on Feb. 7, 1986. The Reagan administration pressured him to leave office in the wake of nationwide protests against his authoritarian rule. Duvalier and his father’s rule amounted to more than 28 years of dictatorship on the island.

This week, the U.S. Embassy in Haiti issued a statement on the current impasse in which it voiced concern over the removal of the Supreme Court justices and called for legislative elections “as soon as technically feasible and presidential elections soon after.”

How Argentina helped open the region for the Russian vaccine.