For a Biden Arctic Agenda, Look to Governance

Competition with China is too narrow a strategy for the far north.

The consolidation of U.S. foreign policy around “great-power competition” against China (and, to a lesser extent, Russia) may prove to be one of the Trump administration’s most durable legacies, effectively coordinating the activities of a sprawling defense community around a singular (if vague) idea. But in the Arctic, great-power competition is too narrow and too confrontational a strategy to be the overarching U.S. approach to the region. The Biden administration, which faces its share of challenges around the Arctic, should address them under a rubric not of competition but of positively reinforcing regional governance and rules.

Sustaining the status quo may not be the kind of flashy, novel policy goal that typically appeals to a new administration, but it would help set a clearer agenda for what forms of competition are necessary in the region, and where coordination may be the wiser course.

Maintaining the Arctic’s status quo does not mean inactivity. The United States will need to show sustained diplomatic leadership and tailored military weight to ensure that the region remains a relatively peaceful domain where activities are guided by Arctic nations and Arctic institutions such as the Arctic Council or the Arctic Coast Guard Forum. Moderating China’s efforts to secure greater influence in regional forums and decision-making will require active engagement with more than only the United States’ most enthusiastic allies. Moreover, where China does work through the region’s preferred structures, the United States should seek to accept those activities as legitimate.

Governance can even help negotiate the nascent but high-profile question of Arctic Chinese investment. Developing a transparent, collaborative, cross-Arctic process to monitor Chinese foreign direct investment and working to block only those investments that meet a consistent threshold for risks to regional security could help maintain the balance. That might involve a new mechanism like the Arctic Development Bank recommended in a 2017 CNA report. Such an institution could provide an effective counterweight to Chinese investment and, through competition, still deliver greater results to the Arctic communities that most need access to capital. 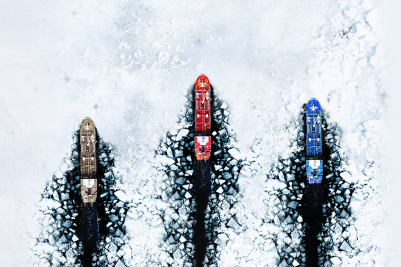 Governance is also a helpful way of charting a course through a complex relationship with Russia. The country is rightly seen as destabilizing in many parts of the world. Yet it is also the largest Arctic nation by land area and has incentives to play by the local rules in order to facilitate investment, promote use of the Northern Sea Route, and moderate the need for defense spending—something U.S. policy should encourage, not least to enable its own limited resources to be redeployed elsewhere. The Arctic’s existing institutions, such as the Arctic Council, and the region’s approach to consensus-based rule-making led by Arctic nations favors the United States, its allies and partners, and Russia. The region’s power balance is in a mild state of flux, with Russia recapitalizing derelict infrastructure and increasing its operational tempo off the coast of Alaska and under the sea. Yet it remains, in the long view of U.S.-Russian security dynamics, a familiar and manageable challenge.

A group of scholars, including myself, and naval officers representing seven Arctic nations recently proposed options to enhance regional security dialogue with Russia, including restarting the Arctic Chiefs of Defense meetings, continuing collaborations in the Arctic Coast Guard Forum, and implementing an Arctic Code for Unplanned Encounters at Sea framework. Active security cooperation between the United States and Russia seems infeasible, and Russia’s malfeasance in Ukraine should not warrant a free pass in the Arctic. Yet deconfliction and transparency can help reduce the likelihood of an accident or miscalculation, prioritizing the broader benefits to U.S. national strategy of a relatively stable Arctic.

Finally, addressing climate change is also a matter of effective governance. The rise of the Arctic in U.S. foreign policy is predicated in part on the region’s increasing accessibility, directly binding climate to Arctic security. President Joe Biden has already signaled a growing interest in tackling climate change as a security issue. John Kerry, named as the administration’s incoming climate envoy, will have a seat on Biden’s National Security Council. In late October 2020, then-rumored nominee for defense secretary Michèle Flournoy wrote an op-ed arguing that the U.S. Defense Department should be a key player on climate change.

Climate mitigation will pay explicit dividends in the Arctic, which is warming at twice the global rate. And the most effective means of implementing a climate agenda is through collaborative institutions. This includes global mechanisms, like rejoining the Paris climate accord, but also redoubling diplomatic energy directed toward the success of regional frameworks like the International Maritime Organization’s Polar Code and the Arctic Council’s working groups on conservation and the marine environment. The Biden team, facing Russia’s ascent to chairing the Arctic Council later this year, could once again benefit broader national security objectives through narrow coordination with a competitor.

Other unusual or unforeseen Arctic challenges are likely to emerge over the course of a Biden presidency. NATO’s role in the high north remains a source of dispute. The United States and Canada maintain divergent interpretations over the status of the Northwest Passage. Greenlandic or Scottish independence could upend Arctic dynamics. A governance-oriented policy agenda that focuses on preserving a peaceful and secure Arctic can help provide an outline for responding to any contingency. And while strategic competition among rival powers will not disappear, in the Arctic, the Biden administration’s most effective approach will be a United States committed to a positive rules-based regional agenda.

Joshua Tallis is a maritime and polar analyst at the Center for Naval Analyses, where he is a research scientist in the strategy and policy program. In 2018 he deployed with USS Harry S. Truman as the civilian analyst on the U.S. Navy’s first Arctic carrier deployment since the end of the Cold War. The views in this article do not necessarily reflect those of his employer.

Forget Greenland, There’s a New Strategic Gateway to the Arctic

The Faroe Islands have a history of trading with everyone who will buy their fish. With growing tensions in the Arctic region, the islands are now receiving more attention from superpowers.