John Magufuli’s coronavirus denialism and refusal of vaccines have put millions of Tanzanians at risk.

The highlights this week: Tanzania’s president remains silent on the extent of the COVID-19 pandemic devastating the country, garbage in Angola’s streets is a sign of growing discontent, and which African Oscar contenders to watch.

President John Magufuli declared Tanzania free of the COVID-19 pandemic last year and has maintained that stance since; even as hospitals fill up and funerals proliferate, Magufuli and his government have continued to behave as if the country has been untouched by the pandemic.

Dubious data. Tanzania has recorded just 509 infections since the start of the pandemic and a mere 21 deaths, a number that is remarkably low compared with its neighbors’ and also likely inaccurate. The country stopped releasing any statistics in May and then in June 2020 declared the country COVID-free.

A look at its neighbors’ statistics shows what Tanzania’s true statistics could be: Kenya to the east has recorded nearly 103,000 infections and 1,795 deaths, while Zambia to the south has registered 69,347 cases and 951 deaths. Nearby Mauritius and Madagascar have shown that not even islands have been spared, making Tanzania’s statistics even more implausible.

On the African Union’s Centres for Disease Control and Prevention coronavirus dashboard, one of the most reliable sources for pandemic statistics on the continent, Tanzania is a blank column. Magufuli’s government has refused to release any further statistics on the pandemic, leaving citizens guessing at the extent of the public health crisis.

Grave evidence. Anecdotal evidence shows that Tanzanians have much to worry about. Tanzania’s Catholic Church spoke up this month, begging its followers to wear masks and protect themselves as the country fails to outline a strategy. The Tanzania Episcopal Conference told BBC Swahili that it had noticed a rise in funeral services in cities, carrying out daily masses.

Bloomberg reported that seven major hospitals in Dar es Salaam had to turn patients away because they were inundated in recent weeks. Their intensive care units were at capacity, while beds, oxygen, and respirators were all in short supply. An exasperated lawmaker in Magufuli’s party, Zacharia Issay, urged the government to break its silence on the pandemic, telling parliament: “I am tired of going to burials.”

Dangerous misinformation. When the government has broken its silence, it has arguably been as dangerous as the virus itself. Magufuli’s cabinet members have reportedly mocked mask-wearing and criticized neighboring countries for imposing lockdown measures.

In an embarrassing televised display this month, Health Minister Dorothy Gwajima gave a demonstration on how to mix a smoothie of natural ingredients to boost the immune system and avoid diseases like COVID-19. Wrapping a scarf over her head, she demonstrated how Tanzanians could use herbal steaming as a remedy for respiratory infections. She also told the press that the government had no plans to procure vaccines.

Stoking fears. The health minister is taking her cues from Magufuli, who has also created suspicion about vaccines. Positioning himself as a champion against Western imperialism, Magufuli implied that Tanzanians were being used as guinea pigs for dangerous, untested vaccines. Even after being chastised by the World Health Organization, Magufuli would not walk back his comments.

After eight months of insisting that there were no COVID-19 infections in his country—and after Denmark reported that two of its citizens tested positive for the variant after traveling to Tanzania—Magufuli finally acknowledged the virus’s ongoing presence this month. He blamed Tanzanians who traveled abroad for bringing the virus home.

God help us. Magufuli has repeatedly turned to religion rather than science, saying God will protect his country. It’s a refrain he has used before to suppress critics and walk back reproductive rights. Indeed, Magufuli has repeatedly relied on faith and fears of a Western devil to further entrench his increasingly authoritarian regime—replacing policy with a cult of personality. This time, however, his style of governance is likely costing thousands of Tanzanian lives.

Feb. 16-Feb. 19: The International Criminal Court will hear the cases of two of the Central African Republic’s former rebel leaders, Alfred Yekatom and Patrice-Edouard Ngaïssona, accused of war crimes and crimes against humanity.

Feb. 21: Niger is expected to hold a runoff presidential election after no candidate achieved a clear majority in the January vote.

Feb. 22: The United Nations Security Council will discuss the ongoing insurgency in Somalia.

No returns on COVID-19 vaccines. The African Union says it will not be “walking away” from the Oxford-AstraZeneca vaccine despite disappointing results against the COVID-19 variant found in South Africa. (Evidence showed that the vaccine does not protect against mild to moderate cases caused by the new variant.)­

The AU has already acquired 100 million doses of the vaccine that is widely seen as a viable option for developing countries because it does not need to be stored at subzero temperatures. Meanwhile, South Africa is trying to figure out what to do with the 1 million AstraZeneca doses it already paid for. South African officials denied news reports that the country was trying to return them to the manufacturer in India and said it will share the doses with the AU. 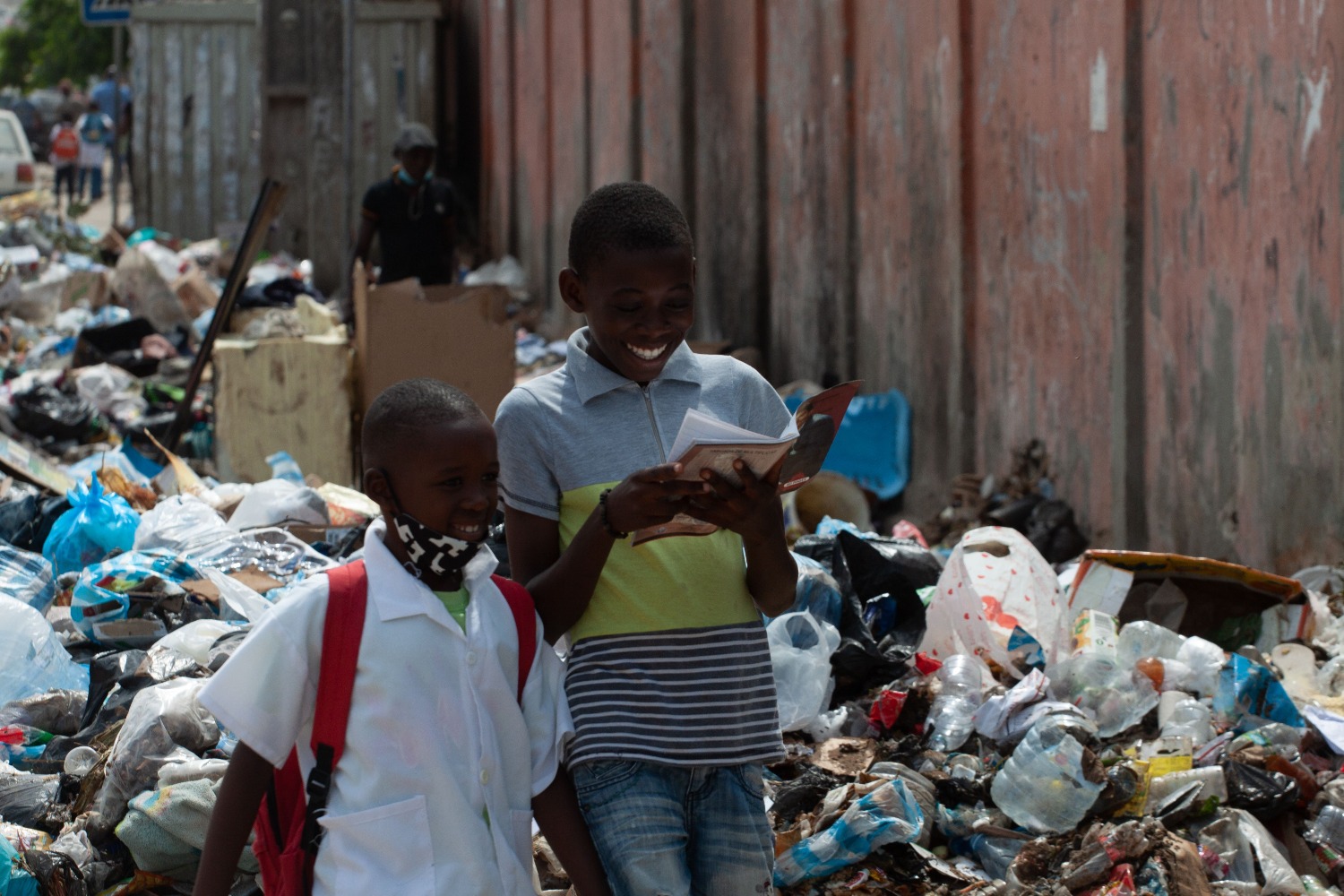 Students walk to school in Luanda on Feb. 10.OSVALDO SILVA/AFP via Getty Images

Discontent in Angola. If garbage piling up in the streets of Luanda is an indicator, there is growing frustration among the citizens of Africa’s second-largest oil producer. After replacing longtime strongman José Eduardo dos Santos, President João Lourenço’s attempts at reforming Angola from within the ruling People’s Movement for the Liberation of Angola (MPLA) party were first met with public enthusiasm.

Now, with a dictator gone and a stagnant economy, there are rumblings of discontent. As the only ruling party since the country’s independence, the MPLA will likely win the 2022 election, but the public may not accept it, the scholar Rui Santos Verde wrote. The warning of a “latent revolution” from the Oxford University researcher was reprinted by several local newspapers, and did not go unnoticed among ruling elites in Angola.

Zuma vs. Zondo. Former South African President Jacob Zuma faces possible arrest for contempt of court after he refused to show up to a corruption inquiry this week. He ignored a constitutional court order to appear before the commission—and now the court has to decide whether it will issue an arrest warrant.

Zuma set up the commission himself in 2018, but now, without the protection of the executive office, he has become a difficult witness; Zuma accuses the commission’s head, Deputy Chief Justice Raymond Zondo, of harboring a personal vendetta against him.

A united opposition in Chad. Fifteen opposition parties have banded together to back a single opposition candidate in Chad’s April presidential election. The fragmented parties are pooling their resources behind newcomer Theophile Bebzoune Bongoro after forming the ambitiously named Victory Alliance.

They hope that choosing one champion to challenge incumbent President Idriss Déby may finally end his three-decade rule. Five other opposition leaders decided to back a more recognizable candidate, Saleh Kebzabo. Both candidates will have to campaign in a country where police are already violently dispersing opposition rallies.

France’s war in the Sahel. This week, French President Emmanuel Macron met with the leaders of the Sahel G-5 countries—Burkina Faso, Chad, Mali, Mauritania, and Niger—to discuss how to stop a protracted regional conflict from turning into France’s Afghanistan.

For eight years, France has deployed 5,100 soldiers to the Sahel region as part its Operation Barkhane force to fight a cross-border terrorist insurgency, and Chad has now announced plans to add 1,200 troops to the effort. But France may be losing the public’s support in the region after an airstrike in northern Mali ostensibly targeting jihadis reportedly killed 20 people attending a wedding.

COVID-19 vaccine rollouts in Africa. How many shots have been administered per 100 people? 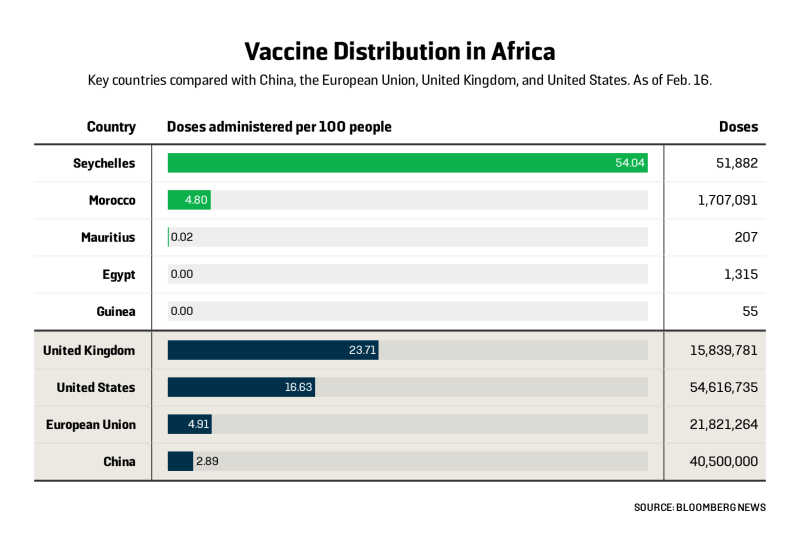 Acing home-schooling. When millions of children across Africa were sent home from school as part of COVID-19 lockdowns, many feared that students without proper access to the internet or computers would be left behind. For uLesson, a Nigerian tech start-up focused on education apps, this period of uncertainty became a growth opportunity.

Founded in 2019, the company announced last month that it had raised $7.5 million in Series A funding. That’s on top of the $3.1 million it raised soon after launching. In just over a year, uLesson has been downloaded nearly a million times by students in Nigeria, Ghana, Sierra Leone, Liberia, and Gambia. It plans to expand to southern and East Africa.

The app is tailored to the local curriculum of each country. But what is perhaps most promising is that it is also a mobile app. While 800 million Africans still don’t have regular access to the internet, at least half are expected to become mobile internet users by 2025. The innovation of education apps and other tech start-ups won’t solve the problems of high data costs or poor infrastructure, but it does show what is possible with a mobile phone and a reliable connection.

Africa’s Oscar contenders. Last week, the Academy Awards announced the shortlist of nominated films in the best international feature film category, whittling down 93 entries to 15. Two African films made the cut: Night of the Kings from Ivory Coast and The Man Who Sold His Skin from Tunisia. In the first, an Abidjan prison run by inmates must choose a new leader in a hierarchical system of Shakespearean political theater. In the dark and satirical Tunisian entry, a Syrian refugee finds a way into Europe by allowing an artist to use his body as a canvas, permitting entry into the EU via its galleries.

The films that did not make the cut are still well worth watching. The Milkmaid follows the story of two sisters caught in Boko Haram’s insurgency in northern Nigeria and has already won several continental awards, while Lesotho’s first ever Oscars entry, This Is Not a Burial, It’s a Resurrection, garnered glowing reviews at the Venice Biennale for the story of an 80-year-old widow trying to save her community from forced resettlement.

The long road to free trade in Africa. Decades in the making, the African Continental Free Trade Area finally went into effect on Jan. 1, but less than two months in, the ambitious agreement is already hitting the indelible barriers that are national borders, Doyin Olagunju writes in Foreign Policy.

The geopolitics of Africa’s digital transformation. The race is already on between China and the West to determine who will influence Africa’s burgeoning digital economy—in infrastructure but also on data and standards. But it isn’t too late for African economies to control their own online destinies, Faten Aggad writes in the Mail and Guardian.

We welcome your feedback at newsletters@foreignpolicy.com. You can find older editions of Africa Brief here. For more from Foreign Policy, subscribe here or sign up for our other newsletters.

As Modi’s BJP Stalls, Can the Congress Party Rev Up?