A World Without War

A new book argues that America’s massive military is predicated on imaginary threats—and we’d all be better off without it.

Imagine you were the president of the United States and, annoyed by the incessant nagging of your national security advisors, you decided to put their dire warnings to the test. One effective (although insanely risky) way to do so would be as follows. First, you’d spend four years publicly mocking those advisors while gutting their staffs and stuffing their offices full of loyal but incompetent hacks. Then, during the last two weeks of your term—arguably the most fragile moment in any administration—you’d foment an insurrection that distracts the country’s attention from absolutely everything else, leaving it uniquely vulnerable to attack. And then you’d plop down in front of the TV, skip all your intelligence briefings, and just watch what happened.

Although his motives may have been different, this is pretty much what Donald Trump did during his disastrous four years as president. And the results were, to put it mildly, unexpected—especially given the kinds of warnings we’ve all heard from national security experts over the last 20 years. Between January 2017 and January 2021, the United States suffered only a handful of domestic attacks by Islamist extremists. And none of the country’s main adversaries—Russia, China, or Iran—took advantage of the chaos by making any major violent military moves against it. (Hacking was another story, but it never rose to the level of a kinetic attack or provoked a similar response.) 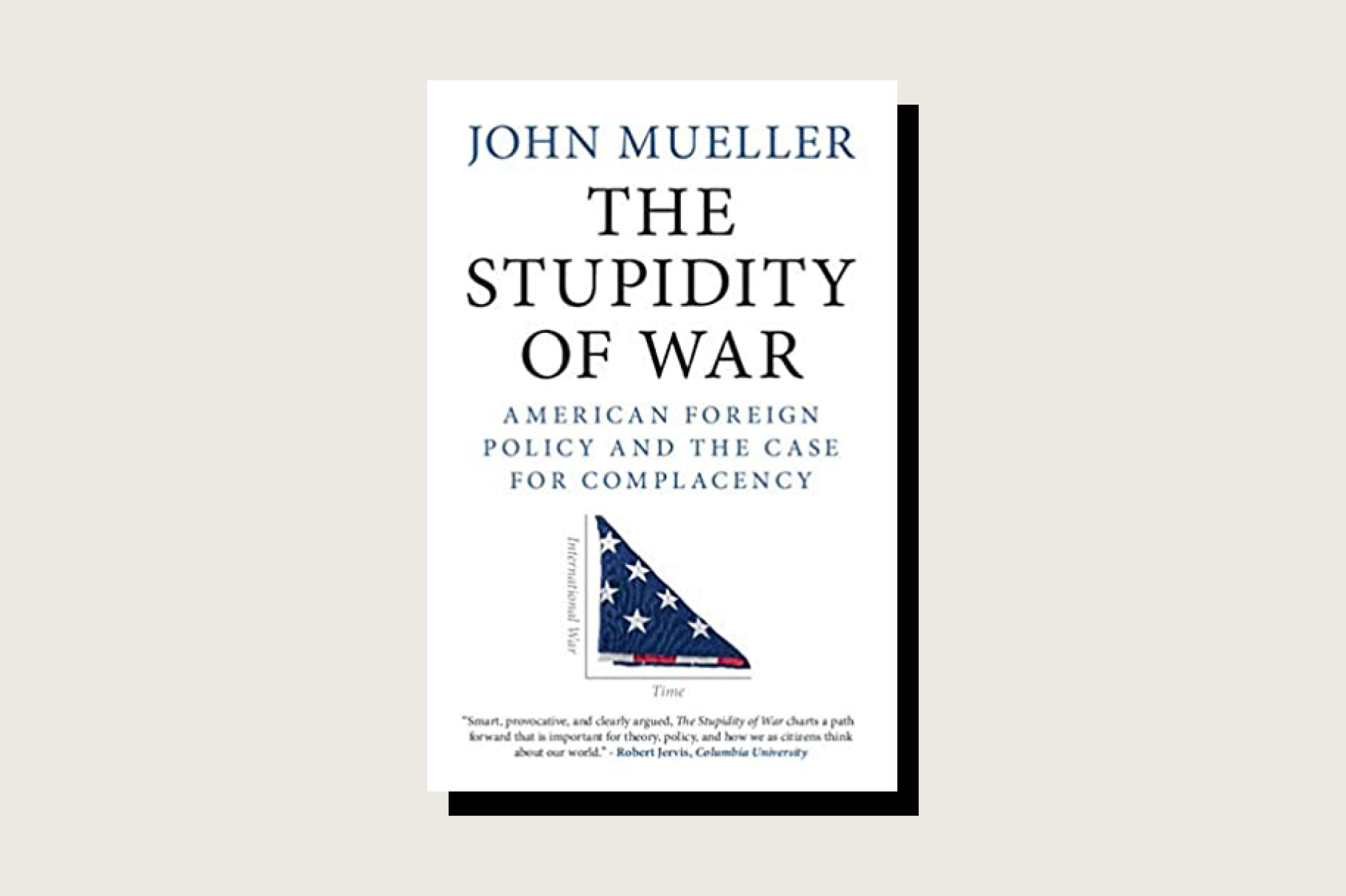 What explains this remarkable outcome? John Mueller, a respected political scientist at Ohio State University, offers an answer in his new book, The Stupidity of War: American Foreign Policy and the Case for Complacency. The attacks never materialized, Mueller argues, because despite everything you’ve heard, the United States doesn’t actually face any major security threats today. The dangers only exist in the fevered imagination of U.S. politicians and defense planners.

The full thesis of Mueller’s important, if highly idiosyncratic, book goes something like this. Point one: War is stupid and always has been. Point two: Ever since World War I, more and more citizens and their leaders have come to recognize this truth. Point three: That has led to the existence today of an almost universal “aversion to international war” and a “culture or society of international peace.” This culture has made traditional war between developed states “obsolescent, if not completely obsolete.”

The U.S. government, however, has consistently failed to recognize this reality, due to its habit of making wild extrapolations based on a few rare events—principally the Korean War and the 9/11 terrorist attacks. U.S. security experts saw these experiences as scary harbingers of things to come, instead of the extremely luck-dependent one-offs they actually were. But the reality is that today’s international environment is just not very threatening to the United States. Mueller’s takeaway? The country doesn’t need its huge standing military and should downscale it at once.

Mueller’s is the latest in a series of books by so-called restrainers who argue that the United States’ highly militarized pursuit of hegemony is a dangerous mistake that has done very little good and a huge amount of harm, both domestically and abroad. (Other recent examples include Stephen Wertheim’s Tomorrow, the World and Andrew Bacevich’s The Age of Illusions.)

Their arguments are important and deserve a wide hearing, especially at the start of the Biden administration, when it feels as if the world is entering a new era and the future direction of U.S. foreign policy seems up for grabs. Books like Mueller’s should help inform the debate. So it’s worth looking at his central observations in a little more detail.

Since 1945, Mueller points out, “the United States … has never really been confronted by a truly significant security threat, a condition that persists to the present day.” During the Cold War, the Soviet Union was never actually interested in attacking the United States; although it did dream of expanding its empire, it sought to do so by fomenting communist revolutions abroad, not through military conquest. Today, the threat from radical Islamist terrorism is similarly small. Since 9/11, there have been extremely few successful attacks within the United States. Even worldwide, the number of annual fatalities from Islamist terrorism roughly equals the number of Americans who drown in their bathtubs each year.

Washington’s other big fixations, meanwhile—a scheming Russia and a resurgent China—should also be kept in perspective. Both countries are powerful, and their leaders often talk in threatening ways. But both run trading states that depend on global stability and peace. And neither Vladimir Putin nor Xi Jinping harbors Hitler-like ambitions of acquiring large new territories by force.

Which leads to Mueller’s third key point, his argument against Washington’s insistence on maintaining its huge standing military. Not only is doing so punishingly expensive (Mueller estimates the price at a cool half-trillion dollars a year), but the spending also comes with huge opportunity costs: Mueller cites one estimate that if the cash the United States spent deterring the Soviets during the Cold War had been invested in the domestic economy instead, it “would have generated an additional 20 or 25 percent of production each year in perpetuity.” Even worse, the existence of the United States’ enormous arsenal has proved irresistibly seductive to the country’s leaders, who can’t resist reaching for it whenever problems arise. (When you’ve got a billion-dollar, precision-guided stealth hammer, as the saying goes, everything looks like a jihadi nail.)

If Mueller had stopped there, and wrapped up his book with some policy prescriptions, The Stupidity of War would merit a place on White House bookshelves for administrations to come. But he doesn’t do either of those things, which has the unfortunate consequence of making the book too easy to dismiss.

First, while Mueller’s fogyish and curmudgeonly affect can be amusing at times (threats are not merely “seen,” they’re “espied”), he’s so determined to challenge the conventional wisdom at every pass that it leads him into some wild digressions. These don’t serve the larger argument, and they’re distracting—as when he pauses at length to insist on the futility of the anti-Vietnam War movement. When Mueller indulges in inflammatory moral dudgeon on random topics, meanwhile, the results get even worse, as when he remarks—seemingly out of nowhere—that abortion amounts to a “high-tech form of infanticide” that has “resulted in the extinguishment of more lives than World War II.”

Worse, Mueller sometimes swings so hard for the fences that he whiffs completely. So, for example, while minimizing the threat Iran poses to the United States, he compares the 1979-81 hostage crisis to a mere case of “house arrest,” as though the imprisoned U.S. diplomats were allowed to sleep comfortably in their own beds during the harrowing 444-day episode. (They weren’t.) Even more problematic, while downplaying the threat from China, Mueller blithely dismisses Beijing’s handling of its Uighur minority as merely “graceless.” His intention here may be to come across as plucky or ironic, but the result is ugly and morally obtuse.

Passages like these are likely to alienate readers, which is a pity, since the core points made by the book are so important. War, after all, is stupid—a truth all leaders should work even harder to keep front-of-mind. Yet The Stupidity of War has an even bigger flaw. Like the work of so many restrainers today, Mueller’s argument is almost entirely negative; he does a great job of killing some sacred cows, but he never really delivers on his book’s subtitle by sketching out an alternative U.S. foreign policy. Although he writes favorably about the virtues of both “appeasement” (which he thinks got an undeservedly bad name at Munich) and “complacency,” he doesn’t provide much sense of what these principles would look like in action. And that’s a pity. The lacuna leaves readers to wonder what form U.S. policy toward China, Iran, and Russia would take in Mueller’s ideal world.

And the oversight allows him to skip many of the hard questions military retrenchment would force Washington to confront. If, for example, the United States withdrew its armed forces from around the globe, it would have to rely more on proxies to serve its ends (or simply allow them to serve their own). But recent years have shown what giving the Saudis and Israelis free rein in the Middle East looks like, and it isn’t pretty. Could the United States stomach more of that? Maybe, but if we’re really serious about avoiding more U.S. military enagements, the question should be openly discussed. In a similar vein, complacently appeasing China could lead to a world order shaped much more by Beijing’s preferences than Washington’s. Could the United States accommodate itself to such a world? Perhaps, but Mueller doesn’t tell us what trade-offs and sacrifices that would entail.

Perhaps the biggest unanswered question involves one of Mueller’s strongest arguments in favor of dismantling the United States’ military machine: that its existence keeps tempting the country’s leaders to use it. If this prospect worries Mueller so much, why doesn’t China’s rapid military buildup seem to concern him? After all, his overall case for complacency rests on his argument that China is a status quo player with little appetite for military adventure. But if building huge arsenals inevitably tempts their owners to use them, won’t Beijing also soon find military adventures impossible to resist?

In the end, none of this may matter. As Mueller acknowledges, no matter how strong his arguments, few current U.S. policymakers are likely to embrace them; the political risks of appearing weak, and of allowing an attack to happen on their watch, are just too great. Still, the country is in an inward-looking mood, and its new president is a cautious pragmatist with a history of treating military missions very skeptically. (Joe Biden was one of the few principals in the Obama administration to oppose the raid that killed Osama bin Laden, for example.) If a book like Mueller’s helps reinforce such caution, we all might be better off.

Jonathan Tepperman is an editor at large at Foreign Policy, a role he assumed in November 2020 after three years as the magazine’s editor in chief. He is the author of The Fix: How Countries Use Crises to Solve the World’s Worst Problems. Twitter: @j_tepperman

Some policies may be worth keeping, but Trump’s handling of allies and withdrawals from conflict zones are not among them.

Biden’s nomination of a retired general to head the Pentagon reinforces a dangerous trend. His confirmation must come with concrete safeguards.