Welcome to Foreign Policy’s Latin America Brief. The highlights this week: the Salvadoran president’s upcoming sweep of Congress, a general in command at Petrobras, and the music video that has the Cuban government on edge.

Welcome to Foreign Policy’s Latin America Brief. The highlights this week: the Salvadoran president’s upcoming sweep of Congress, a general in command at Petrobras, and the music video that has the Cuban government on edge.

Since his 2019 election, Bukele has been wildly popular but has lacked a congressional base. That’s led to major clashes, including his summoning of the military to the legislature in February 2020 to encourage the approval of a loan.

The social media-savvy Bukele styles himself as distinct from what he calls El Salvador’s corrupt, “same as always” politics. The 39-year-old former mayor has implemented hard-line security policies and touts as victories a harsh COVID-19 lockdown and a dramatic drop in homicides. (An El Faro investigation suggests the decline may have been linked to secret talks with the MS-13 gang.)

Nuevas Ideas may earn enough seats to allow it to appoint five supreme court justices and the next attorney general with no outside support. The current attorney general has probed Bukele’s government for corruption related to pandemic spending and is favorable toward U.S. anti-corruption efforts in Central America.

Human rights groups in El Salvador and abroad have warned that Bukele’s policies have marked a step backward toward the country’s authoritarian past. When two men were shot to death at an opposition party’s rally last month, one of the country’s worst episodes of political violence in decades, Bukele suggested on social media that the murders could have simply been a stunt by the opposition.

Most voters, however, view Nuevas Ideas as their best option. The country’s drop in violence represents a powerfully positive change in their lives and deserves continued close study.

No-so-new faces. Of Nuevas Ideas’ 84 candidates for Congress, 10 were previously candidates for other parties—like Bukele himself, who was expelled from one of El Salvador’s two main parties in 2017. Eight have been accused of corruption or other misconduct in judicial and media investigations, according to El Faro.

The U.S. stance. A top Biden administration official said, “we are going to have our differences with Bukele’s government” and “a leader unready to go after corruption won’t be a U.S. ally.” As the United States lays the groundwork for what may be as much as $4 billion in aid to Central America in the next four years, its efforts to strengthen anti-corruption initiatives in the region may prove to be important checks in El Salvador.

Going out on a limb. If government talks with gangs were indeed successful in reducing violence, it could be worth trying to continue them—with more transparency—wrote Ivan Briscoe and Tiziano Breda for War on the Rocks. Bukele has denied that any such talks occurred, but his political capital could be uniquely effective for open negotiations.

Saturday, Feb. 27: Deadline for the departure of the European Union ambassador from Venezuela expires, imposed in response to new EU sanctions on 19 Venezuelan officials.

Pfizer’s “high-level bullying.” In negotiations with some Latin American governments over vaccine sales, Pfizer demanded countries use sovereign assets like embassy buildings and military bases as warranties in the case of high-cost lawsuits, The Bureau of Investigative Journalism reported. Argentina and Brazil failed to close vaccine deals with Pfizer due to what they viewed as unfair demands, which led to a three-month delay in a deal with an unnamed other country.

Ecuador’s runoffs. After several days of limbo following Ecuador’s first round of the presidential election on Feb. 7—Indigenous candidate Yaku Pérez alleged fraud, when a recount began and was suspended—election officials announced this week that leftist economist Andrés Arauz and conservative banker Guillermo Lasso will advance to the April 11 runoff.

Powder keg. On Tuesday, an apparent dispute between Ecuador’s Los Choneros gang and rival groups led to riots in four prisons that killed 79 people. That’s more than died in all of the country’s prisons over the course of 2020. Jails in the country are overcrowded, and last year’s budget for an ongoing initiative to improve conditions in prisons was cut back by 70 percent.

False positives. For two years, Colombia’s transitional justice court has been exhuming mass graves, trying to get a better tally of army murders that were falsely counted as combat killings in the country’s civil war. They announced that at least 6,402 of these so-called “false positives” occurred between 2002 and 2008, nearly three times more than previously reported.

“Homeland and Life.” A new music video critical of the Cuban government has amassed 2 million YouTube views in less than 10 days and prompted a backlash in the country’s newspaper and criticism on social media from President Miguel Díaz-Canel. A repudiation of Fidel Castro’s slogan “Homeland or Death,” the video features famous singers living on and off the island, some of whom were active in recent protests calling for freedom of expression and have been particularly vocal about racial inequality in the country. 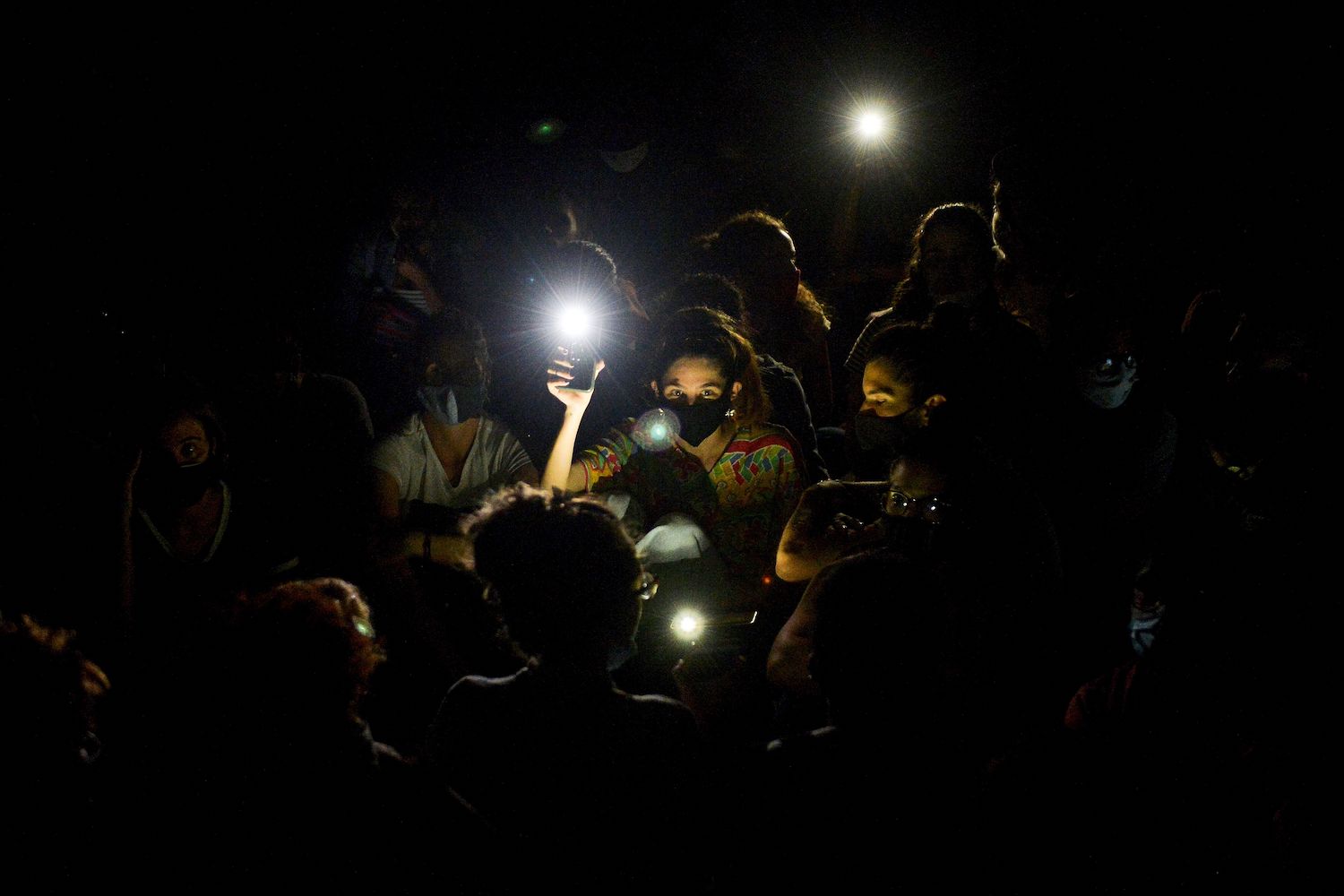 A group of young intellectuals and artists hold up lights on their mobile phones during a demonstration at the doors of the Ministry of Culture in Havana, on Nov. 28, 2020.

A group of young intellectuals and artists hold up lights on their mobile phones during a demonstration at the doors of the Ministry of Culture in Havana, on Nov. 28, 2020.Yamil Lage/AFP/Getty Images

Petrobras stock fell around 20 percent in a single day after the announcement. (It has since partially recovered.) If the change is approved, it will be the first time the company—which had been on a steady path to financial recuperation after an era of price controls during the Dilma Rousseff administration—has been run by a member of the armed forces since the country’s reopening from military dictatorship in the late 1980s.

Looking to 2022. With his 2022 reelection campaign in mind, Bolsonaro is making a bet that working-class support will matter more than the blessings of Brazil’s investment community, which has criticized his decision to replace Petrobras’ head. No pro-market figure that might run against the current president matches his own popularity.

A stranded asset? Of the world’s dozens of state oil firms, Petrobras is among those less financially prepared for lower long-term oil prices, which may come with the global shift away from fossil fuels, according to a report from the Natural Resource Governance Institute. Its deep-water drilling has especially high upfront costs. Installing a poor technical manager could portend debts at the company that will ultimately fall into the laps of Brazilian taxpayers. 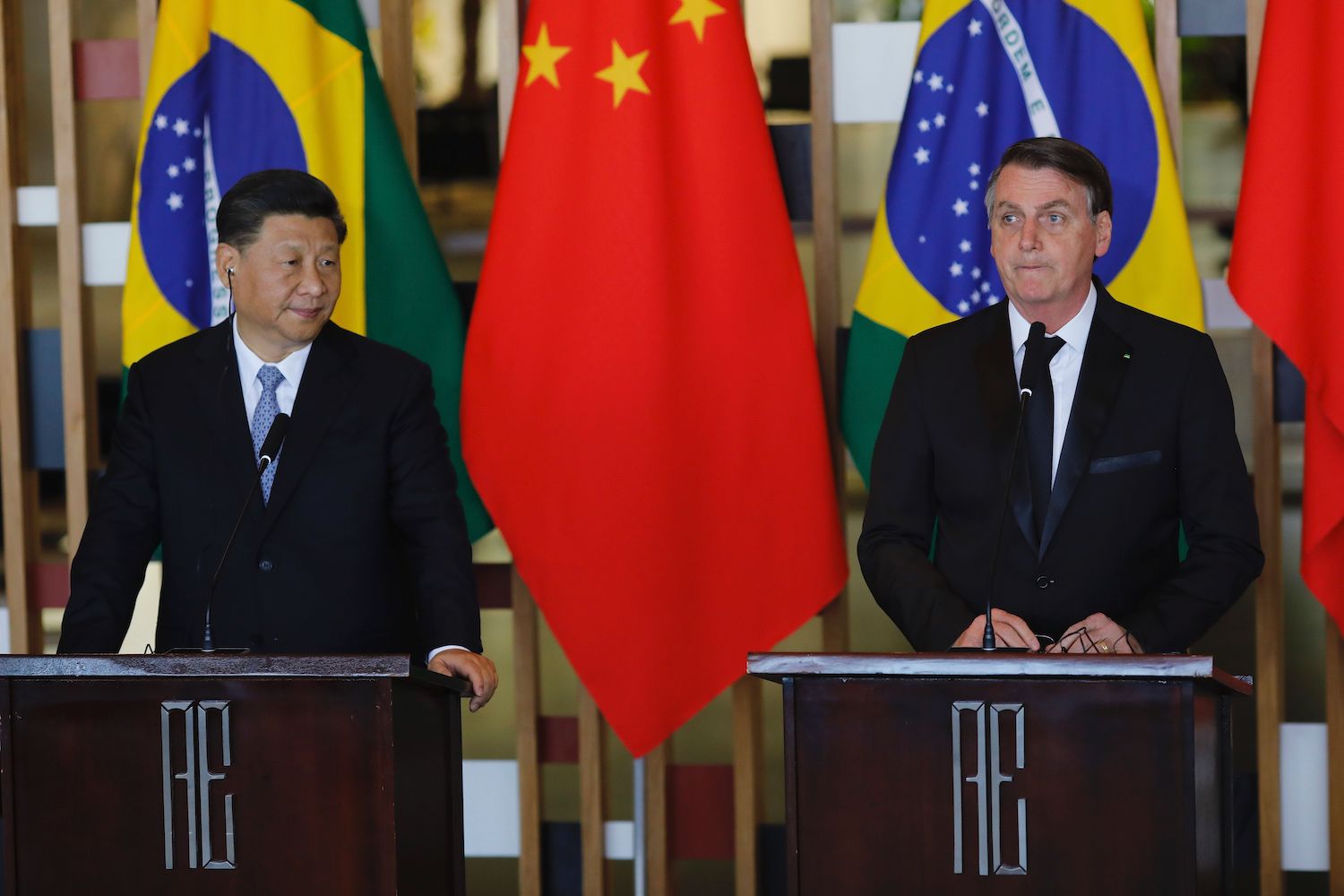 From loans to acquisitions. Last year was the first time since 2006 that China’s two main lenders to Latin American governments, the China Development Bank and the Export-Import Bank of China, committed no new financing to the region’s governments or state-run firms. Although the pandemic partly explains the closed wallet, it’s part of a longer downward trend, as discussed in a new report from the Inter-American Dialogue and Boston University.

Meanwhile, the value of Chinese firms’ merger and acquisition deals in Latin America rose to $7 billion from $4.3 billion in 2019, nearly all of the increase in the electricity sector. This and other key 2020 data are discussed in a new “China-Latin America Economic Bulletin” from Boston University.

A more cautious stance. Since 2005, Chinese credit to the region grew to exceed the values loaned by the World Bank and Inter-American Development Bank combined—until 2019. Meanwhile, trade has remained strong: It held steady during 2020 despite Latin America’s slump.

Pledges of global vaccine solidarity have been slow to produce results.

El Salvador’s Scramble for a Bailout

With top officials beset by U.S. sanctions, the country’s IMF negotiations are bound to get complicated.

Will U.S. ‘Nearshoring’ Go From Buzzword to Trend?

Washington says it wants to relocate supply chains to the Americas but has offered few concrete incentives to do so.