As deaths shoot up, the country’s data blackout and new variant put the whole world at risk.

The highlights this week: How Brazil’s COVID-19 chaos poses far-reaching risks, a coalition of film and theater artists speak up about workplace power dynamics, and Colombia plans a restart to its aerial war on coca.

The highlights this week: How Brazil’s COVID-19 chaos poses far-reaching risks, a coalition of film and theater artists speak up about workplace power dynamics, and Colombia plans a restart to its aerial war on coca.

New Variants Are Only the Beginning

In addition to its staggering human cost—COVID-19 deaths in Brazil reached an all-time high of over 1,900 in a single day this week—Brasília’s laxity toward the pandemic has come with a data blackout that is hindering efforts to understand the highly contagious new strain spreading across the country, a scientist advising the World Health Organization on COVID-19 vaccines said.

The new variant, known as P.1, was estimated to be between 1.4 and 2.2 times more transmissible than other variants in a preprint study, which also found that it can evade 25 to 61 percent of immunity caused by a previous infection by a different strain.

Scientists believe that P.1’s rapid spread is related to the sudden packing of intensive care units across Brazil—by Tuesday, 19 of the country’s 27 states had reached at least 80 percent ICU capacity. Nine were at more than 90 percent.

Brazil’s travails are a snapshot of another trend the WHO warned about this week: After six weeks of falling daily case counts around the globe, new cases have begun to rise again, thanks in part to new variants and relaxation of precautions.

Brazil’s role in this trend has particularly worried the WHO, not only because President Jair Bolsonaro and his government have spurned containment measures, but also because the country has failed to seriously track P.1’s spread and characteristics. Brazil currently performs genetic sequencing on only a tiny proportion of confirmed cases. One city health department in the greater Rio de Janeiro area only found out that P.1 arrived in the city 10 days after a patient died of it.

The strain is thought to have developed in early November 2020 in the Amazonian city of Manaus. That month alone, over 92,000 people flew out of the city to the six other Brazilian states where P.1 was identified by late February. The strain has been identified in at least 24 other countries, including Peru, where daily deaths have climbed since January, and the United States, where it has already been found in five states.

Brazil and Peru have each fully vaccinated less than 1 percent of their populations.

Chances of containment. Brazilian state health secretaries have called on Bolsonaro to implement a national lockdown, but they have largely been ignored. Bolsonaro has staunchly opposed lockdowns throughout the pandemic, and the fact that police are among his most faithful supporters may have contributed to poor enforcement of locally mandated restrictions. Some states have imposed curfews in recent days.

What we know. Another preprint study that sequenced 250 virus genomes from the state where P.1 emerged found that it accounted for 4 percent of strains in the state in early December, 45 percent in late December, and 73 percent in early January, adding to the evidence for its heightened ability to spread.

What we don’t. It appears P.1 can reinfect those with natural immunity, but what about people who have received different vaccines? A small-scale lab experiment (also a preprint) found that antibodies from the CoronaVac vaccine currently being administered in Brazil were weaker against P.1 than against other strains of the virus. Researcher Nuno Faria cautioned that more study is urgently needed.

Friday, March 12: Deadline for Peru to determine which candidates will be on the ballot for April 11 elections.

AMLO and Biden turn the page. The Mexican and U.S. presidents set a positive tone in their first virtual bilateral visit, a shift from Andrés Manuel López Obrador’s delay in recognizing Joe Biden’s presidential victory. For more hints at where the relationship is heading, watch out for the U.S. reaction to Mexico’s new restrictions on private participation in the electricity grid, which some analysts said could violate the U.S.-Mexico-Canada free trade pact.

Venezuelan civil society steps up. Foro Cívico, a newly formed group pushing for a peaceful and democratic transition in Venezuela, has put forward 15 election experts as candidates for the National Electoral Council’s next seven-year term. Venezuela’s legislature, dominated by President Nicolás Maduro’s party, will select the council in the coming weeks.

Foro Cívico’s move represents new momentum for a political transition from within existing Venezuelan political structures, unlike last December’s congressional election, which much of the opposition boycotted. 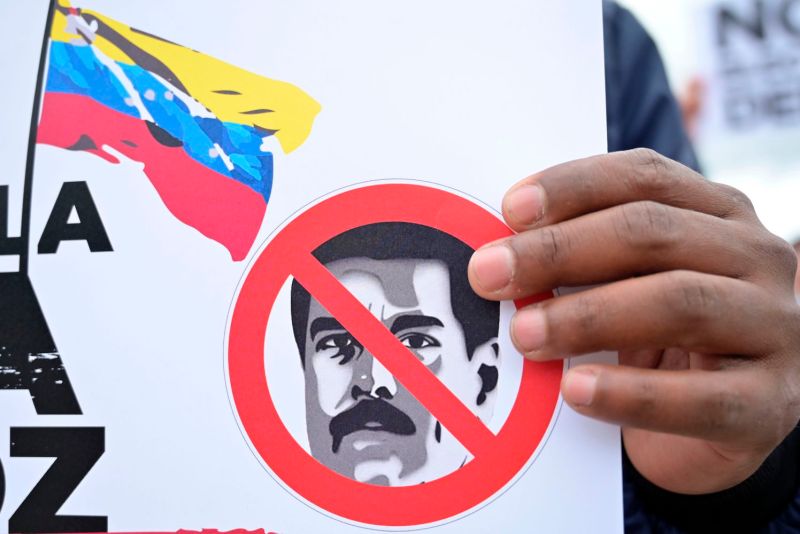 Forced sterilizations. After decades of efforts to shelve the case, a Peruvian court began to consider allegations this week that former President Alberto Fujimori and other officials were responsible for the forced sterilizations of more than 2,000 women in the 1990s, most of them poor and Indigenous.

What’s keeping women artists back. Women in the film and theater industry across 11 Latin American countries have launched a new partnership against verbal harassment and psychological harm in the workplace. The “Respect Onstage” campaign will hold a series of events during March.

An “elder statesman” of reggae. Jamaica’s prime minister was among those who paid condolences this week after the death of Neville Livingston, better known as Bunny Wailer, the last living member of the original Wailers trio, which included Bob Marley and Peter Tosh. The “spiritual mystic” of the group, Livingston spent much of his six-decade career inside Jamaica, where he accompanied reggae’s development at its grassroots.

Colombia has put in motion the approval process to restart aerial fumigation of coca crops for the first time since it paused the practice in 2015 over health concerns.

The air war on coca has a controversial history in Colombia, the only country where glyphosate has been sprayed from planes for counter-drug purposes. Before the most recent pause, what year did aerial counter-drug spraying reach its peak? 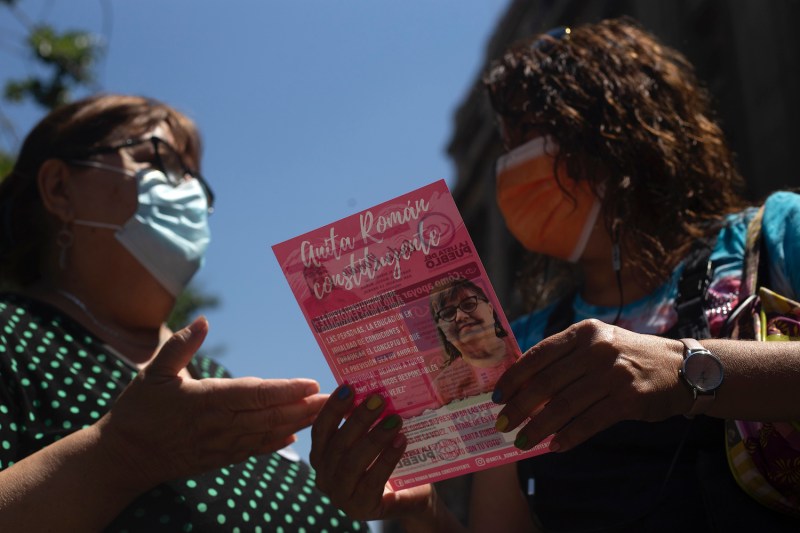 Anita Román, a constituent candidate for the People’s List, talks to a woman in downtown Santiago, Chile, on Dec. 30, 2020.Claudio Reyes/AFP/Getty Images

March 8 is International Women’s Day, usually marked by protests across Latin America. While those are likely to be smaller this year due to the pandemic, feminist mobilizations are currently playing important roles in domestic politics across the region.

In Mexico, the president’s “Achilles’ heel.” Mexican feminists previously loyal to López Obrador have vocally criticized his support for the gubernatorial candidacy of Félix Salgado Macedonio, who was accused of rape by two women. López Obrador called the accusations a “media lynching.” Hundreds of his party members, including a coalition of female party leaders, have demanded he remove Salgado’s candidacy and side “with history.”

“Mexico’s feminists have become the one true thorn in AMLO’s side: a singular political movement that he does not seem to understand, cannot control and will be unable to suppress,” Denise Dresser wrote last October for Americas Quarterly.

In Honduras, highlighting extrajudicial executions. Feminist protests erupted after the apparent homicide of a 26-year-old nursing student, Keyla Martínez, in police custody in early February. The calls for justice surrounding her death raised the attention of the United Nations, European Union, United States, and Amnesty International, which all pressed Honduras to investigate the case. Allegations of femicide come on top of a push by some U.S. lawmakers to sanction Honduras for human rights violations.

In Chile, framing the constitutional process. Thanks to feminist activism, half of the participants in a constitutional assembly to be elected in April must be women. The proposals of several feminist candidates have gained attention, such as a new constitutional right to individual autonomy over the body, which could pave the way for abortion access, Charis McGowan wrote for Foreign Policy.

While it was Former President Juan Manuel Santos who put an end to the practice in 2015, his predecessor, Álvaro Uribe, had already scaled back on it during his second term, saying “it causes complaints and provokes reactions against eradication.”

Over the years, many coca cultivators whose crops were fumigated simply reestablished them elsewhere. Research suggests that if Colombia’s government hopes to sustainably reduce coca cultivation, it should focus instead on giving growers legal economic alternatives.

NEW FOR SUBSCRIBERS: Want to read more on this topic or region? Click + to receive email alerts when new stories are published on Health, Pandemics, South America