Activists have changed their tactics in response to deadly crackdowns, frustrating the military regime.

YANGON, Myanmar—Over the last week, Myanmar’s military regime has intensified a repressive campaign against its own citizens, shuttering independent media outlets and arresting opposition members in late-night raids. Two party figures have died in custody. And after weeks of peaceful pro-democracy protests, the junta has begun cracking down on activists with lethal force. On March 3, security forces killed at least 30 people nationwide, including eight people in Yangon’s North Okkalapa township, the deadliest incident so far.

While the military likely intended to put an end to the protests with lethal violence, the movement has simply changed shape. In Yangon, Myanmar’s largest city, foot traffic has slowed to the level of the strict pandemic lockdowns last year, but in protest areas, small groups of unarmed activists face off with police and soldiers. More than one month after the Feb. 1 coup, protesters have dug in their heels and adapted their tactics, erecting roadblocks and barriers, embedding themselves in neighborhoods, and evading arrest.

Yangon’s protests resemble siege warfare, but only one side has guns. In the early weeks, protesters of all ages joined in with flashy outfits and irreverent signs criticizing Senior Gen. Min Aung Hlaing. Now, the protesters—mostly in their 20s and 30s—carry metal shields, helmets, gas masks, and the occasional bulletproof vest. They have slowed down police and troop movements through the city. They flee into houses and shops when the authorities arrive, only to reassemble the moment they leave. Frustrated security forces have reportedly begun intimidating local residents to stop them from sheltering protesters.

Feb. 28—when at least 18 people were killed nationwide—marked a major turning point.

Feb. 28—when at least 18 people were killed nationwide, including the first deaths in Yangon—marked a major turning point. Early that morning in Yangon’s Hledan neighborhood, a main protest site, police suddenly opened fire on gathered demonstrators with live rounds, killing two people. Two others were killed elsewhere in the city. Witnesses said there was little warning and no violence from the protesters. The police, who were under the military’s direct control even before the coup, are increasingly joined by soldiers in their patrols, adding to the perception that Yangon is under occupation.

Given the military’s history of human rights atrocities and the widespread resistance to the coup, some analysts predicted a brutal crackdown from the beginning. “Deadly force was probably inevitable at some point,” said Richard Horsey, the senior Myanmar advisor for the International Crisis Group. But rather than deterring protesters, the police killings of mostly young people have “enraged the nation,” he said. Slain protesters have become icons in death, even as the junta denies responsibility. After tributes flooded in for Kyal Sin, a 19-year-old woman killed in Mandalay, authorities forcibly exhumed her body for “investigation.”

Protesters have turned out every day since Feb. 28, often employing new methods of evading the police. Activists have blocked the entrances to Myaynigone, a Yangon neighborhood that crisscrosses a popular bar district, with barricades made of barbed wire, sheet metal, tires, and other materials to slow down security forces and buy protesters a few extra seconds. The neighborhood has seen no deaths and fewer arrests than other protest sites, due in part to its winding alleys and these defensive tactics. Last week, security forces deployed smoke bombs, stun grenades, and rubber bullets but managed to detain only two protesters. 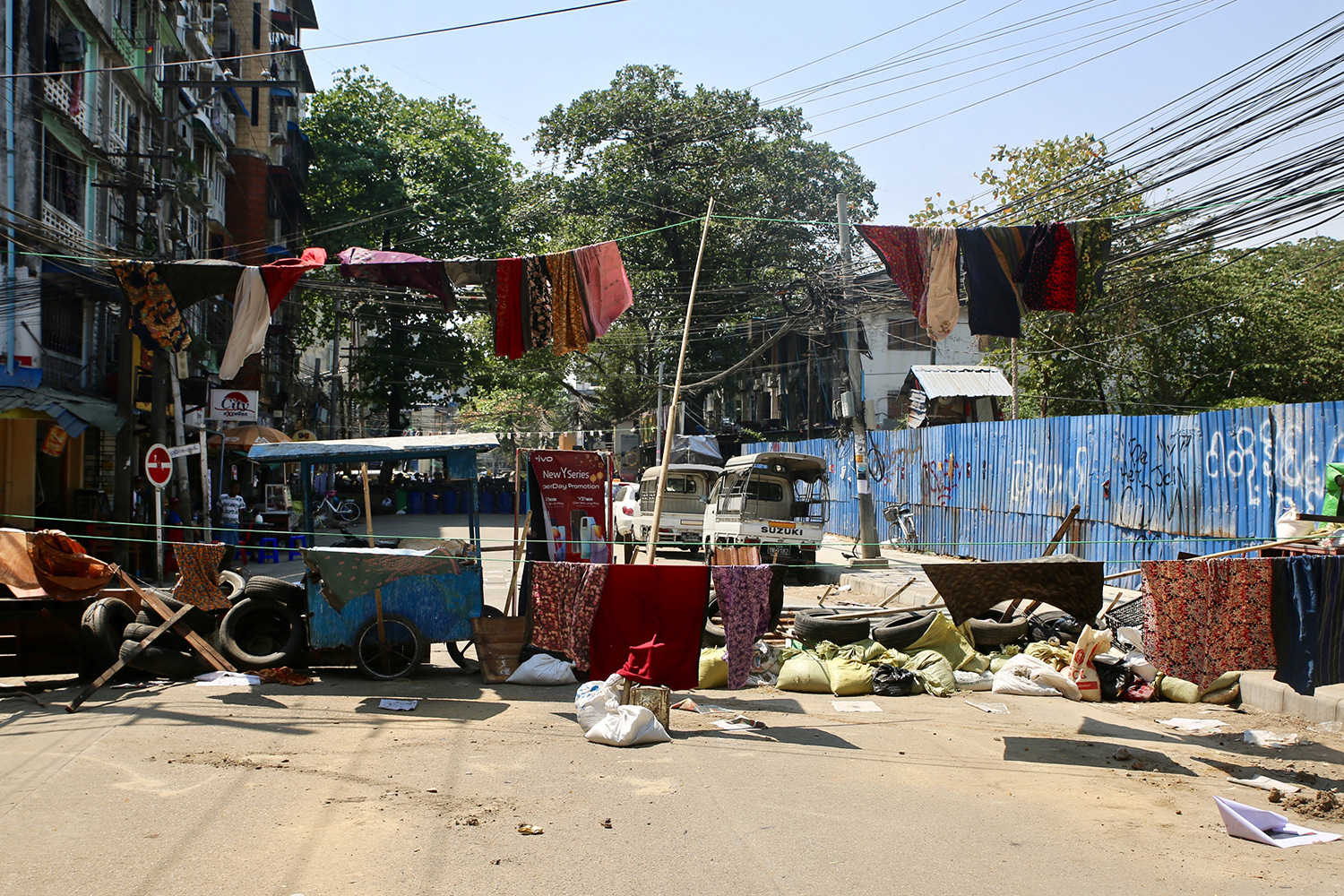 Women’s sarongs, known as htamein, hang as one of the first lines of defense when entering the Myaynigone neighborhood in Yangon, Myanmar, on March 6. Andrew Nachemson for Foreign Policy

Activists have maintained the bold creativity of the early days but in more targeted ways. Clotheslines hung with women’s sarongs and used sanitary pads have appeared near protester barricades across Yangon, taking advantage of the misogyny and superstition of the security forces: Many in the military believe that passing under the garments will sap their masculine energy. The junta has responded by outlawing the practice, and security forces have been photographed removing the clotheslines and even burning the sarongs.

The military’s use of lethal force has added extra tension to protests in recent days. Last week, protesters periodically scattered, running for cover when scouts shouted that snipers were seen in the area. But a handful of people on the front lines refused to budge, huddling behind metal shields that appeared unlikely to stop a live round. “The security forces do appear to be targeting protesters for random killing, and this seems to be an attempt to intimidate and terrorize the rest by sending the message that any protester can be killed at any time,” Horsey said.

Likewise, activists are developing innovative methods of self-defense. Some protesters have shot firecrackers toward the security forces to replicate the sound of live ammunition and send them away, Kyaw Thu Win said. But there is growing debate over whether or not to fight back in earnest. “Within the demonstrators, there are different ideologies,” he said. “Some say we shouldn’t fight back or curse at them; others say we should fight back, and we should shout at them because they killed our brothers and sisters.”

For now, the protesters remain overwhelmingly peaceful, opting to seek shelter in nearby homes, with members of the public gladly provide refuge. Opinion is hardening against the security forces. Although police who quit and join the civil disobedience movement are welcomed as heroes, those who continue to enforce the junta’s orders are increasingly disparaged. “I am fine now … playing hide and seek with the dogs,” one protester texted me on Sunday, using an increasingly common derogatory term for the police. When police and soldiers approached Myaynigone last week, civilian lookouts on their balconies shouted to the protesters below, “The terrorists are coming!”

Now in its sixth week nominally in charge, the military has failed to assert control over the mechanisms of government, facing major internal resistance from high-ranking diplomats and rank-and-file civil servants. As the protests evolve, the junta is also adapting, showing increasing willingness to use heavy-handed maneuvers. In late-night raids on Monday, security forces managed to trap hundreds of protesters near Myaynigone by sealing off a few streets, arresting dozens. As the military grows desperate, more widespread violence from security forces is possible—but it would be a risk to its legitimacy.

“The regime has the ability to unleash deadly violence and clear the streets,” Horsey said. “But the more violence it uses, the harder it will be to govern the country afterwards. It may now have set in motion an extended war of attrition with its own population.”

Led by student activists, the new civil-disobedience movement draws on the experience of older generations—but its methods and demands are a radical break with the past.

Myanmar vs. Its Generals

Thant Myint-U on the future of the protests, what Beijing wants, and what Washington can do to help.

Led by student activists, the new civil-disobedience movement draws on the experience of older generations—but its methods and demands are a radical break with the past.

Myanmar vs. Its Generals

Thant Myint-U on the future of the protests, what Beijing wants, and what Washington can do to help.