The U.S. president’s foreign-policy staff hopes to make the pivot real with an early trip to the region.

Welcome to Foreign Policy’s Security Brief. Hope everyone is mentally preparing to lose an hour of sleep with the upcoming daylight saving time. (And for those quietly cursing this, there are some U.S. senators who agree.)

The highlights this week: Biden team takes off for Asia on China tough talk tour, a U.S. warship comes home after logging 99,000 miles at sea, the National Security Council beefs up on cybertalent, and more.

Welcome to Foreign Policy’s Security Brief. Hope everyone is mentally preparing to lose an hour of sleep with the upcoming daylight saving time. (And for those quietly cursing this, there are some U.S. senators who agree.)

The highlights this week: Biden team takes off for Asia on China tough talk tour, a U.S. warship comes home after logging 99,000 miles at sea, the National Security Council beefs up on cybertalent, and more.

Travel plans for you may lie off in the future, but U.S. Secretary of State Antony Blinken and Secretary of Defense Lloyd Austin—who already have their vaccine shots—are a step ahead.

This weekend, top Biden administration officials will take off for a multiday visit with U.S. allies in Asia, headlined by high-level visits in Japan and South Korea next week, a move that’s designed to signal the new president’s pivot to the Indo-Pacific—and an opportunity to signal the new team’s resolve when it comes to dealing with an assertive China.

Jack will be traveling with Austin the whole way, so stay tuned for dispatches and a special on-the-road Security Brief next week, and shoot us your questions for top officials. In the meantime, here are some of the highlights.

Knocking heads with China. After Japan and South Korea get a rare “2+2” visit with Austin, Blinken, and their counterparts, the first major U.S.-China meeting under President Joe Biden is taking place in Alaska. Blinken and National Security Advisor Jake Sullivan are headed to Anchorage on March 18, after Blinken’s trip to Tokyo and Seoul, to meet their Chinese counterparts—Yang Jiechi, China’s top diplomat, and State Councilor Wang Yi—the State Department announced. Insiders expect the Chinese to try to test how committed the Biden administration is to competition with Beijing. “The Chinese are offering zero accommodations to the U.S.,” a former defense official told Security Brief. “They’re offering only expectations for the U.S. side to change and no change on their part.”

Tough crowd. This meeting is, to say the least, tricky. For starters, Biden is under immense political pressure in Washington to crack down on Beijing on all fronts—trade, tech, security, diplomacy, and everything in between. Biden’s team largely seems to be on board, but with some notable exceptions: Despite the tensions between the two world powers, Biden needs China’s support on some of his top foreign-policy priorities, including climate change, Iran nuclear talks, even Afghanistan. This meeting is a first test of whether Beijing and Washington can find ways to be archrivals in one arena and partners of convenience in others.

#QuadGoals. As India has become increasingly unmoored from its historically nonaligned stance after heavy clashes with China on its border last summer, Biden’s Friday call with the heads of state from the Quadrilateral Security Dialogue, also known as the “Quad,” which also includes Australia, India, and Japan, is a sign that the new U.S. administration also hopes to bring diplomatic pressure to bear on Beijing.

Mira Rapp-Hooper, a member of Biden’s team on the State Department’s policy planning staff, has been temporarily detailed to the National Security Council to help lay the groundwork for the call, officials tell Security Brief.

What’s next? “In some ways the biggest challenge for U.S.-India defense ties is that we’ve picked most of the low-hanging fruit,” said Jeff Smith, a research fellow at the Heritage Foundation’s Asian Studies Center. “We’ve got more military exercises than we know what to do with and we’ve sold India some of our biggest-ticket platforms. The pace of new things might begin to slow.”

NSC cyberteam. The National Security Council is adding more bandwidth on cybersecurity, officials tell Security Brief. Recently joining the NSC from the National Institute of Standards and Technology is Jeff Greene, who is serving as acting senior director for cyber defense, and Andrew Scott, who is the new director for international cyber policy. (Scott served in the same role during the Obama administration.)

New top human rights official. Rob Berschinski of Human Rights First is joining the Biden White House as special assistant to the president and NSC senior director for democracy and human rights. Berschinski previously served in the State Department during the Obama administration.

Secretary of Defense Lloyd Austin has appointed his commission to rename 10 Army installations that carry the names of Confederate generals. Today, Security Brief is asking you to be our informal commission: Who should the United States name those bases after? We’re looking for your most clever, most historically relevant ideas.

Send us some thoughts at securitybrief@foreignpolicy.com. We’ll report back with the results next week.

Long-haulers. After 10 months, the U.S. aircraft carrier USS Nimitz finally returned to its home port at Naval Base Kitsap in Washington state on Sunday. Logging 99,000 miles, it was a record-breaking journey—the longest aircraft carrier mission overseas since World War II—that included missions targeting the Islamic State in Syria and Iraq, training exercises with the Indian Navy, cruising the Strait of Hormuz in the Persian Gulf to deter Iran, sailing past the Horn of Africa to shore up counterterrorism operations in Somalia, and navigating the disputed waters of the South China Sea.

The massive, globe-spanning journey is a perfect glimpse inside the challenges of U.S. foreign policy—torn between trying to extricate itself from costly entanglements in the Middle East and efforts to redirect the United States to confront China for a new era of “great-power competition.” 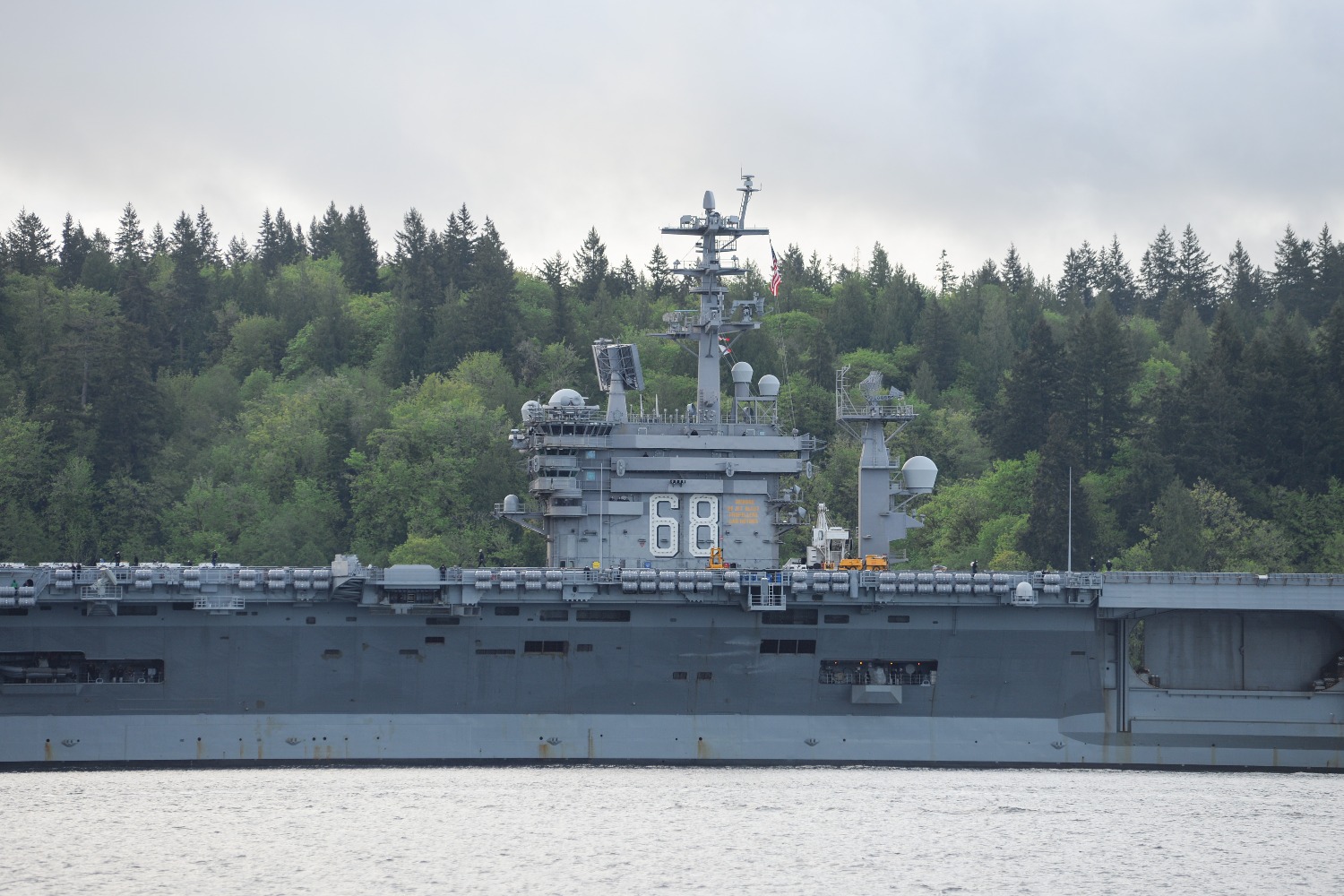 The USS Nimitz gets underway through Sinclair Inlet from Naval Base Kitsap in Bremerton, WA, on Apr. 27, 2020.Jeff Halstead/Icon Sportswire via Getty Images

“Bunker” busters. U.S. diplomats in conflict zones and other global hot spots have long complained about onerous security restrictions that prevent them from going “outside the wire”—beyond the confines of the embassy compound—to do their jobs. Now Sen. Chris Murphy, a Democrat on the Senate Foreign Relations Committee, wants to change that, as Robbie scooped this week. Murphy introduced legislation aimed at shocking the State Department out of its rut of risk aversion and getting more diplomatic boots on the ground in crisis zones. Senior diplomats say the status quo is unsustainable: “It’s ended up in a place where there’s just total risk aversion, total atmosphere of CYA [cover your ass], and it just makes it very hard to get the job done,” one senior diplomat told Robbie.

Inside Russia’s sleek propaganda machines. Disinformation is all the rage these days, and now the Kremlin appears to be trying to package it into fancy high-tech start-ups. Jessikka Aro of Finnish broadcaster YLE has an in-depth report on this phenomenon, following one American woman’s journey into a start-up video production company, Ruptly, that just so happened to be a subsidiary of Russia’s state-funded media giant RT. Just as the West wakes up to the threat from foreign disinformation machines and tries to adapt to them, the disinformation machines are themselves finding ways to adapt.

Trump ambassador eyes job closer to home. Lynda Blanchard, who was Trump’s ambassador to Slovenia, is angling to run for Senate on the Republican ticket in Alabama to replace retiring Sen. Richard Shelby. A big unanswered question, as Politico’s Playbook highlights, is whether Trump will endorse his former envoy.

Drone bases in Africa. New satellite imagery shows how a remote CIA drone base in northern Niger has steadily expanded in recent years as the West grapples with growing terrorism threats in the Sahel region of Africa. The New York Times’s Eric Schmitt and Christoph Koettl report.

Instead of “no comment”. Instead of answering questions from reporters, Thai Prime Minister Prayut Chan-o-cha simply decided to spray them with hand sanitizer.

Not as foreign as you’d think. A GOP lawmaker—you probably know who—referred to Guam, a longtime U.S. territory with a strategic naval base, as a foreign country undeserving of U.S. aid.