The country is on the brink of creating the world’s largest legal cannabis market.

Chipping Away at the Forever War on Drugs

On Wednesday night, a Mexican lawmaker rolled a joint on the floor of the lower house of Congress. Legislators were in the midst of a marathon discussion on the finer details of a bill they ended up passing 316 to 129: the legalization of marijuana for growth, sale, and recreational use.

The measure now goes back to the Senate, where it was already approved and may be slightly modified before landing on the desk of President Andrés Manuel López Obrador, who is expected to sign it.

The possession of very small amounts of drugs has been legal in Mexico since 2009, but this step puts Mexico on the verge of establishing the world’s largest legal cannabis market, a milestone in a country and region ravaged by the war on drugs.

In the Americas, only Uruguay and Canada have legalized recreational marijuana use nationwide. Support for legalization in Mexico, where the death toll from drug-related conflict is far higher than in either country, represents a very slow shift in opinion. Former Mexican President Vicente Fox, one of cannabis legalization’s big proponents, called it “the first step toward the legalization of all prohibited products.”

For now, per the bill approved Wednesday, Mexican adults will be able to possess 28 grams of marijuana and grow six to eight plants in their homes, as well as apply for licenses for larger-scale cultivation.

Mexico’s legalization advocates range from people eager to take a big business approach to the drug to human rights activists more concerned with the fate of incarcerated Mexicans and farmers in areas controlled by cartels.

A previous version of the bill included a requirement that 40 percent of growing licenses be reserved for Indigenous Mexicans, communal land farmers, and other vulnerable groups. The set-aside was intended as a reparation for harm inflicted in the drug war, but it was struck down on Wednesday.

Only after the bill makes it through the Senate will its full details be finalized, including what the change will spell for Mexicans currently imprisoned for marijuana possession and how difficult it will be for small-scale growers to get licenses as compared to corporations.

What is clear, though, is that Mexico’s legal weed market could be worth $5 billion in the coming years, according to the National Association of the Cannabis Industry.

Mexico’s unique path to legalization. Unlike in Canada and Uruguay, Mexico’s legislature was required to legalize marijuana by the country’s Supreme Court after a series of lawsuits there. In the Nation, Maya Averbuch writes that carefully selected plaintiffs—“the kind of people who might sit down to eat with a judge from the Supreme Court,” in their lawyer’s words—were crucial to winning a court argument against state intervention in smokers’ freedoms.

The likely effect on crime. Advocates say legalization will make Mexico safer by bringing cannabis out of the illegal economy. Still, Mexican cartels have diversified away from the drug in recent years to a wide range of activities including cocaine and fentanyl trafficking, extortion, and more.

Between fiscal years 2015 and 2020, as more U.S. states legalized marijuana, seizures of the drug at the U.S.-Mexican border dropped about 83 percent. The International Crisis Group’s Falko Ernst told the New York Times that while legalization is an important step, significantly reducing the activities of organized crime will require additional state policies and resources.

Which country could be next? Medical marijuana use is legal in much of South America, including Argentina, Brazil, Chile, Colombia, Paraguay, and Peru. Former presidents of Colombia and Brazil are among those that support even broader legalization. Mexico may soon follow in Uruguay’s path, where cannabis legalization went from shocking to simply part of “the political background.”

Friday, March 12: Deadline for Peru to determine which candidates are on the ballot for April 11 elections.

A shield for Venezuelans. Some 320,000 Venezuelan migrants currently in the United States will be able to legally remain and work in the country for 18 months thanks to their new federal Temporary Protected Status granted in light of Venezuela’s humanitarian crisis. The measure was a bipartisan demand and comes on the heels of a similar move by Colombia last month. 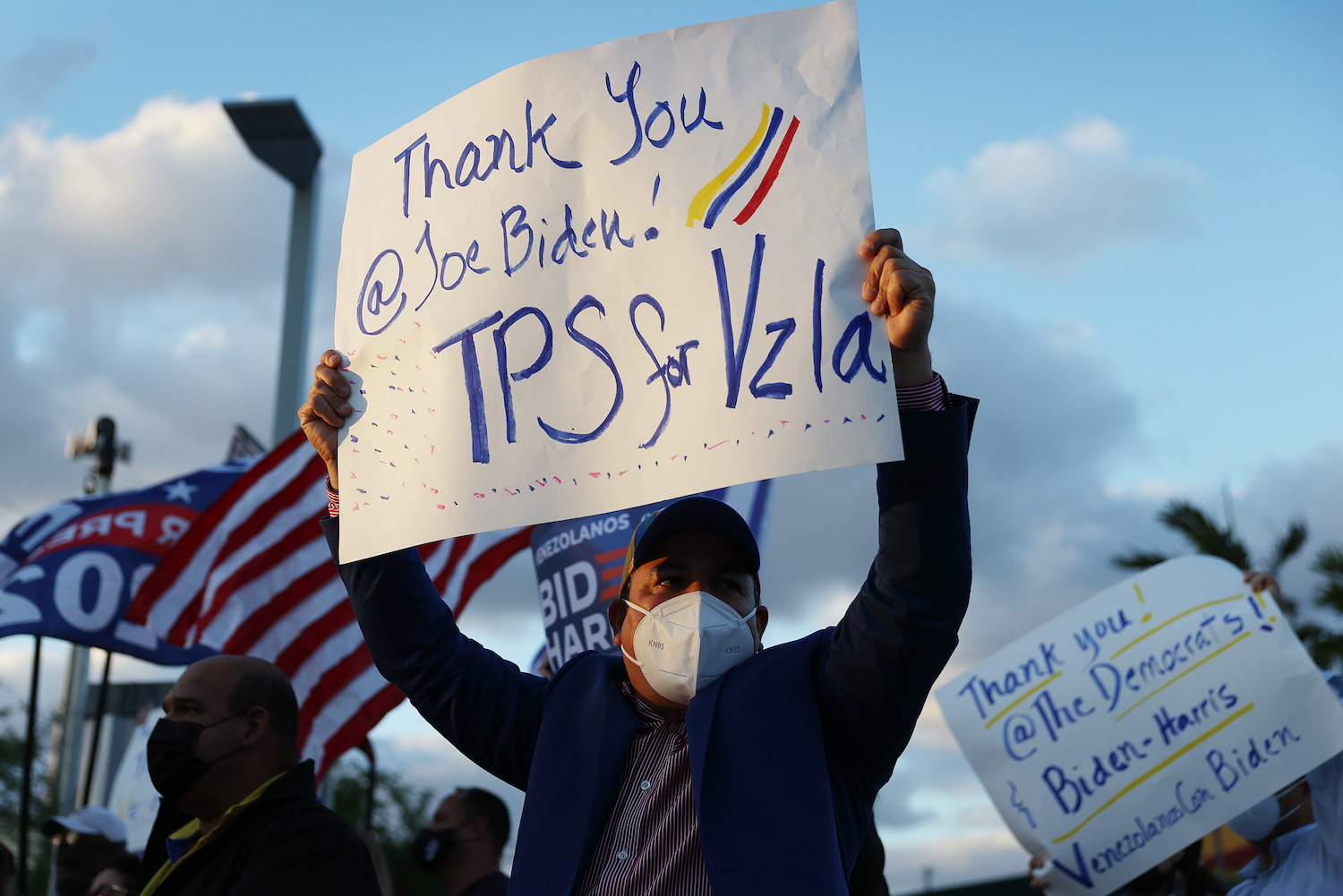 Bolivia post-Morales. Bolivia has had its first local elections since leftist former President Evo Morales’s more moderate protege, Luis Arce, became head of state last November. Although Morales’s party remains the strongest single political force in the country, it lost important contests such as the mayorship of El Alto, where young Indigenous politician Eva Copa prevailed, and the governorship of Santa Cruz, which was won by far-right Luis Fernando Camacho.

Lula livre. In a surprise ruling, on Monday a Brazilian judge overturned former President Luiz Inácio Lula da Silva’s graft convictions, ruling they were tried in the wrong court. The convictions had blocked Lula from running for president against Jair Bolsonaro in 2018; he may now compete in next year’s election.

On Wednesday, Lula addressed the nation, saying Brazil needs a return to health, economic growth, and good governance. He told Brazilians to disregard President Bolsonaro’s COVID-19 advice and take their vaccines (and with his typical zeal, he also assured them that although he is 75, he has “the energy of a 30-year-old and the passion of a 20-year-old”). Lula is currently more popular than Bolsonaro, who delivered a strong pro-vaccine message for the first time after Lula’s speech.

Losing the forest for the trees. The flagship environmental project of Mexico’s López Obrador, which pays small-scale farmers to plant trees, appears to be backfiring, according to nonprofit World Resources Institute. It reports that farmers are cutting down existing forest in order to be able to plant new trees, which may have caused a loss of forest in 2019 that is nearly equivalent in size to New York City.

Meghan sounds familiar. The account from Meghan, the Duchess of Sussex, of questions from the British royal family about the skin tone of her unborn son sparked recognition and discussions about the persistence of racism on Latin American social media this week. “Inter-racial Brazilian families not only have the same worry but also treat their children according to their skin color,” tweeted sociologist Bruna Pereira. “We don’t have to go all the way to the crown, here in Colombia it happens,” journalist Laura Palomino tweeted, adding, “It’s a topic that is and should be an object of rejection and discussion.”

Latin American countries pumped out significant emergency payments to their citizens last year to soften the pandemic’s economic impact. Spending on emergency cash and in-kind transfers—mostly food aid—totaled an estimated 1.55 percent of 2019 GDP for those countries (excluding the Caribbean), according to the U.N. Economic Commission for Latin America and the Caribbean, or ECLAC.

Even so, the region’s Gini index, which measures inequality, rose 2.9 percent. How many millions of Latin Americans moved into poverty in 2020? 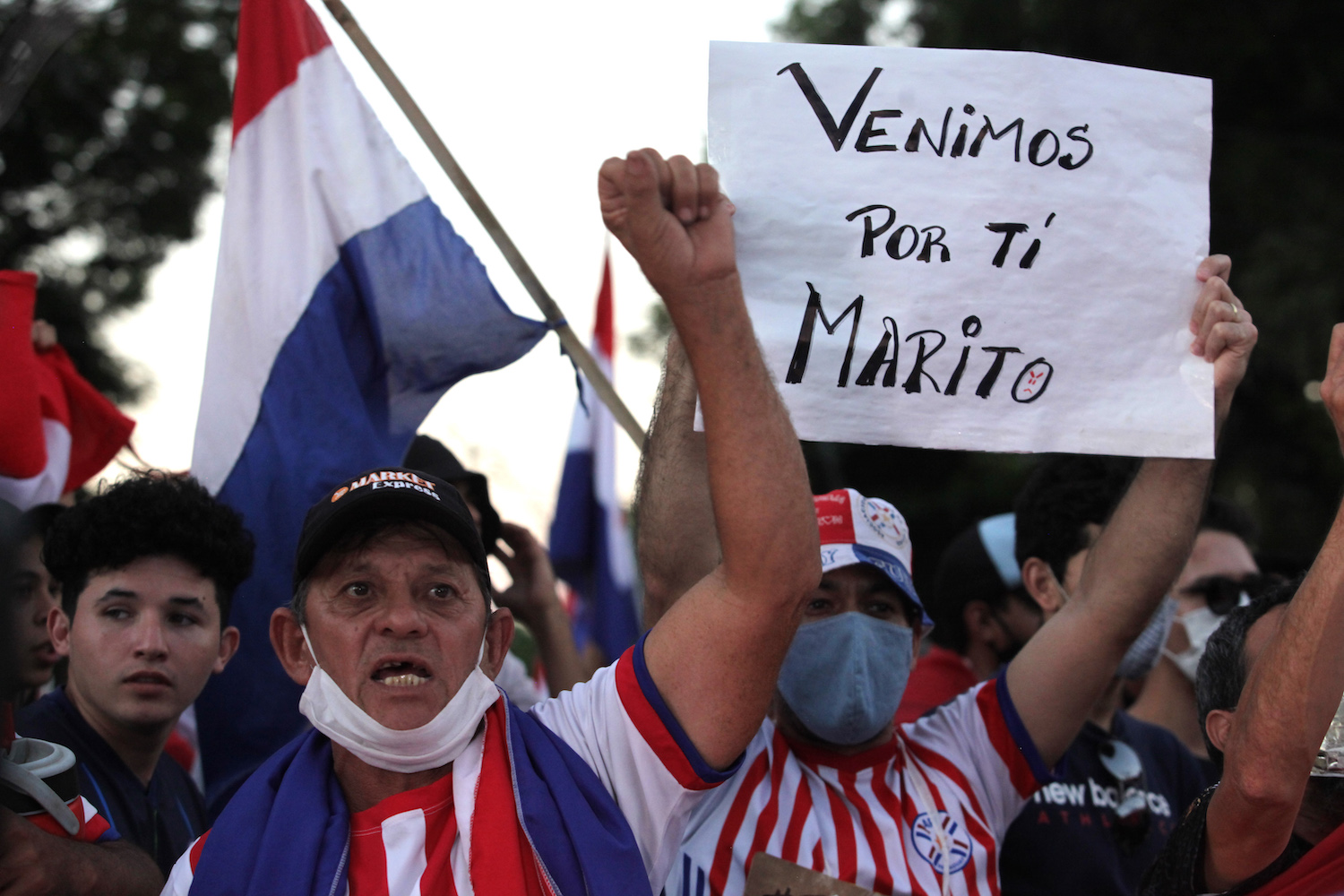 A demonstrator holds a sign that reads “We come for you, Marito” during a protest against Paraguayan President Mario Abdo Benítez’s handling of the pandemic in Asunción, Paraguay, on March 7.Luis Vera/Getty Images

Paraguay’s capital has been awash this week in nightly protests of the government’s poor pandemic management, leading to the replacement of four cabinet members. Demonstrators called for President Mario Abdo Benítez’s ouster, too, and early in the week lawmakers made a first step toward introducing an impeachment vote. Whether such a move is successful will depend in part on buy-in from lawmakers loyal to former President Horacio Cartes, Abdo Benítez’s sometimes-rival.

Paraguay prided itself on low infection numbers for the first few months of the pandemic, but cases have swiftly climbed since early February. The increase is thought to be related to the entrance of the P.1 virus variant from Brazil. Hospitals are short on supplies, and less than 0.1 percent of the population has been vaccinated so far.

Paraguay is just one example of how vaccine rollouts are making international contrasts in pandemic management even starker, causing new degrees of political consequences.

Some, for worse. In Argentina, after a scandal surrounding politicians’ early access to vaccines, a poll found that 19.5 percent of those who voted for President Alberto Fernández’s political group would consider changing their vote in the future due to the episode.

And some, for better. Remarkably, on Monday, Chile surpassed Israel as the nation that had vaccinated the most people per 100 residents in the week prior, according to the Our World in Data portal. It is on track to inoculate 80 percent of its population by June. President Sebastián Piñera has seen his popularity recover from 6 percent on the eve of the pandemic to 20 percent.

Without the emergency aid measures, 43 million people would have fallen into poverty. In turn, the Gini index would have risen by 5.6 percent, ECLAC estimates.

With the launch of its new annual report, the U.N. group advises countries to continue emergency transfers in the short term and work toward reforming their welfare states in the long term. This is a herculean task—not least budgetarily—but one that countries might seriously discuss over the coming year, especially in the context of elections across the region and Chile’s constitutional convention.

Threats, violence, and clampdowns have failed. Can decriminalization work?