Biden Attempts to Stretch the Quad

Long a talking shop, is the four-nation grouping about to grow up?

Here is today’s Foreign Policy brief: The leaders of Australia, India, Japan, and the United States meet for a Quad summit, violence against protesters in Myanmar continues, and Biden sets a July 4 goal for a relative return to normalcy.

Here is today’s Foreign Policy brief: The leaders of Australia, India, Japan, and the United States meet for a Quad summit, violence against protesters in Myanmar continues, and Biden sets a July 4 goal for a relative return to normalcy.

The leaders of Australia, India, Japan, and the United States meet virtually this morning for a summit, as the Biden administration seeks to make good on its commitment to multilateralism, as well as sending China a signal of unity among the regional powers.

The grouping, known as the Quadrilateral Security Dialogue or Quad, has existed on and off since 2004 when it came together on an ad hoc basis to deal with the aftermath of the Indian Ocean tsunami. Today’s meeting marks an evolution, as it’s the first time that the Quad will meet at the leader level.

In describing today’s summit, a senior White House official told Reuters that “the goal here is basically to introduce the Quad as a new feature of regular diplomacy in the Indo-Pacific.”

There are concrete outcomes expected, too. The group is set to announce a partnership whereby Japan and the United States will finance manufacturing in India of the Novavax and Johnson & Johnson vaccines, with Australia handling the distribution among Southeast Asian and Pacific nations.

In a nod to China, the Quad leaders are expected to declare an alliance on rare-earth procurement, attempting to undercut Chinese dominance in a market crucial to the production of smartphones and electric vehicles.

What next? What the Quad does after today’s summit is an open question. Foreign Policy columnist Salvatore Babones argues that, since the four countries share few trade interests and are not aligned on climate policy, one clear issue unites them: maritime security. “The Quad is never going to go to war with China,” Babones writes. “What the Quad can do is provide a backbone for broad Indo-Pacific maritime security cooperation that tamps down China’s brinkmanship across the region.”

Writing in Foreign Policy on Wednesday, former U.S. Secretary of Defense James Mattis, Michael Auslin, and Joseph Felter laid out a vision that goes further than just securing the Indian and Pacific Oceans. They add supply chain and technology cooperation, as well as regional diplomacy as key tasks for the Quad if it wishes to make a difference.

Forget China. Evan Feigenbaum and James Schwemlein of the Carnegie Endowment for International Peace outline a less militarized approach. The Quad, they write, “needs to evolve from a China-focused club of four to a group of first movers on an array of specific functional challenges.” Among those challenges: Leading on green technology and raising infrastructure development and finance standards in the region. 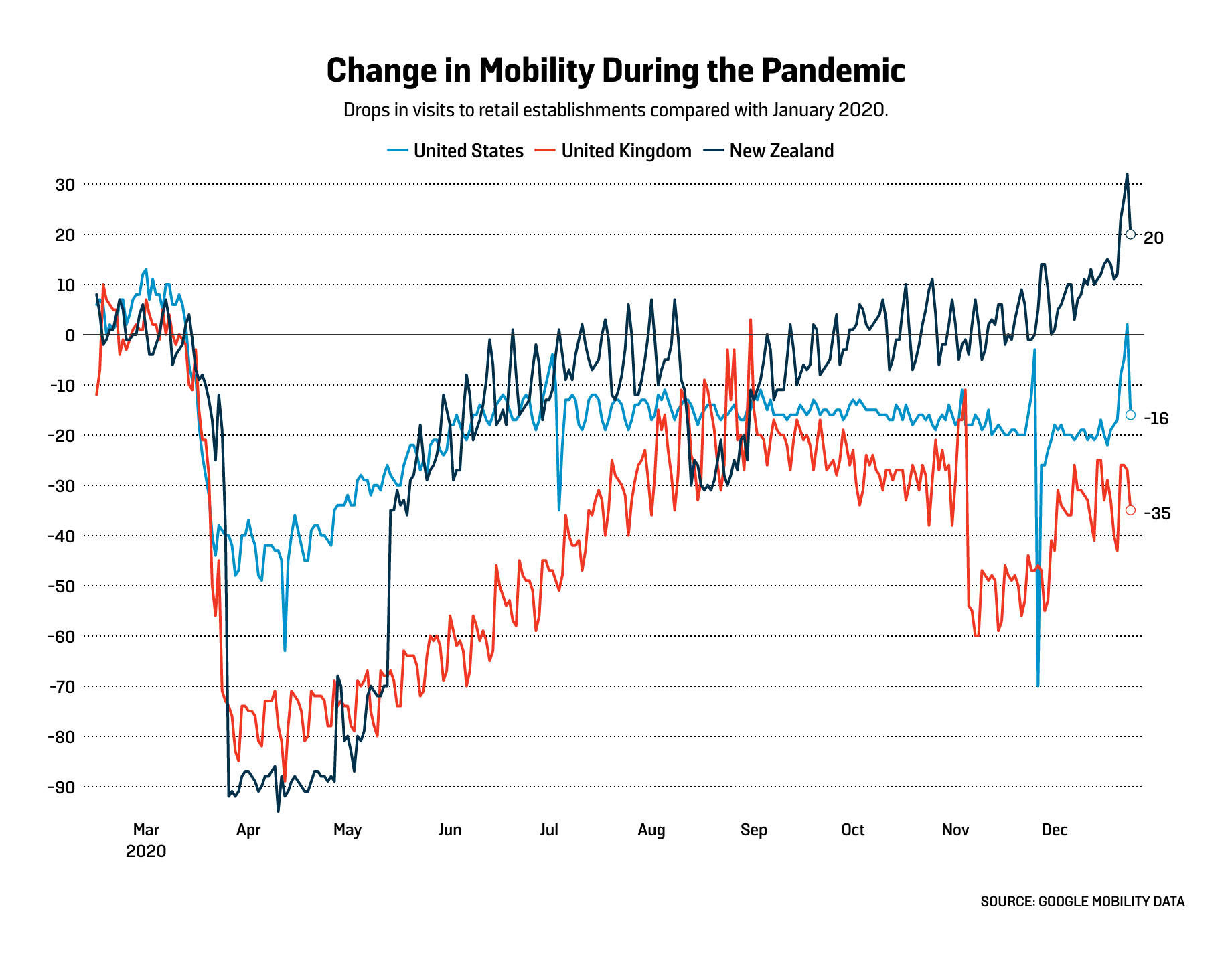 Using Google Mobility data, Ahmed Mushfiq Mobarak, an economics professor at Yale University, illustrated the economic cost imposed on the United States and U.K. after a year of “muddled, indecisive” pandemic response policies. New Zealand, which experienced a much sharper drop in mobility for a month during its initial harsh lockdown in April 2020 compared to the United States, has rebounded while the United States and the U.K. continue to experience a prolonged slump. “The best way to protect livelihoods in the longer term is to crush the virus first and only then reopen the economy,” he writes.

Biden gives U.S. vaccine boost. U.S. President Joe Biden said he was directing U.S. states to make all adults eligible to receive a COVID-19 vaccine by May 1, an acceleration of previous timelines as both the rate of vaccinations and the amount of U.S. vaccine supplies increase. Biden also set a date for Americans to return to something close to pre-pandemic normalcy: July 4.

An increased U.S. rollout may spell good news for the rest of the world, as the Biden administration has stated it would not share its vaccine stockpile until the U.S. population is vaccinated. The United States has purchased roughly 1.2 billion vaccine doses so far with a further 1.2 billion doses under negotiation, according to a count by the Duke Global Health Innovation Center.

Myanmar violence. A U.N. Security Council resolution calling for restraint from Myanmar’s military has gone unheeded, as 12 more demonstrators were killed in anti-coup protests on Thursday, bringing the death toll to 70 since protests began after the Feb. 1 coup.

Meanwhile, Myanmar’s military authorities added a bribery allegation to the ever increasing number of criminal charges against democratically-elected leader Aung Sun Suu Kyi on Thursday. The junta leaders allege that she accepted illegal payments totaling $600,000 as well as gold while serving in government. The allegations add to others made since the coup, including a charge of importing walkie-talkies illegally and breaking lockdown rules.

Andrew Nachemson, reporting for Foreign Policy from Yangon describes how the protests have come to resemble “siege warfare, but only one side has guns.”

Hong Kong’s legislature. A Chinese official has responded to U.S. criticisms of recent changes to Hong Kong’s election laws by citing the Jan. 6 riots at the U.S. Capitol. U.S. Secretary of State Antony Blinken criticized Beijing’s move to largely eliminate pro-democracy voices from the Hong Kong legislature as a “continuing assault on democratic institutions in Hong Kong” earlier this week. “I don’t know that after the storming of the U.S. Capitol on January 6, how the U.S. has such moral capital to point fingers at the election institutions of Hong Kong,” said Zhang Xiaoming, deputy director of the Hong Kong and Macau Affairs Office of the State Council.

Germany’s state elections. In what is seen as a bellwether ahead for September’s federal election, the two German states Rhineland-Palatinate and Baden-Württemberg hold state elections this Sunday. The vote in Baden-Württemberg, home to much of Germany’s car industry, will test popular support for the Christian Democratic Union (CDU), now led by Armin Laschet, as it seeks to hold on to its junior partner status in the state’s Green-led coalition. German politics has been rocked by a corruption scandal in recent days over allegations of profiteering in mask procurement deals, leading to the resignation of two CDU Bundestag members.

Algeria sets election date. Algeria will hold early parliamentary elections on June 12, President Abdelmadjid Tebboune announced on Thursday roughly a month after dissolving parliament. Tebboune has been under pressure to implement political reforms after taking over from President Abdelaziz Bouteflika in 2019. His government finalized an electoral bill on Sunday designed to cut down on corruption and expand voter options. June’s election will be seen as a barometer of voters’ faith in the political system, after opposition boycotts led to a 40 percent turnout in the 2019 presidential election.

Twinning streak. The number of twins in the world’s population may have reached its highest point on record according to new research published in the journal Human Reproduction. The peak has been driven by a 32 percent rise in twinning in Asia, and a dramatic 71 percent rise in North America. Researchers pointed to increased use of medically-assisted reproduction as well as women delaying childbearing until later in life, both of which increase the chances of having twins.

Despite the bump in twins being born in North America, Africa and Asia account for roughly 80 percent of global twin deliveries at present. Christiaan Monden, the study’s author, attributed Africa’s numbers to a relatively high number of dizygotic (fraternal) twins—born from two separate eggs.

NEW FOR SUBSCRIBERS: Want to read more on this topic or region? Click + to receive email alerts when new stories are published on Foreign & Public Diplomacy, United States, India