U.S. and Chinese Diplomats Set to Meet on Thin Ice

Bilateral talks in Alaska are likely to be an airing of grievances, not an exchange of views.

The highlights this week: U.S. and Chinese officials meet for the Biden administration’s first bilateral talks, China faces a choice in Myanmar after attacks on factories there amid protests, and Beijing begins offering COVID-19 vaccine visas—for those who have received a Chinese-made shot.

If you would like to receive China Brief in your inbox every weekday, please sign up here.

The two countries haven’t reached the stage of China and the Soviet Union’s relationship after border clashes in 1969, when Soviet Premier Alexei Kosygin had to meet his Chinese counterpart, Zhou Enlai, at the Beijing airport. But the choice of venue, a meeting room in Anchorage in below-freezing temperatures, indicates that U.S.-China relations are at a nadir. And the format of the talks is as frozen as the weather outside: three three-hour sessions, with none of the social mixing that eases discussions—not even a dinner together.

While issues such as climate change are nominally on the table, the odds of significant progress at the Alaska meetings are small. The talks are more likely to be an airing of grievances than an exchange of views. The United States could raise concerns about the crackdown in Hong Kong, abuses in Xinjiang, tensions in the South China Sea, or Chinese involvement in recent cyberattacks.

One major obstacle for any future U.S.-China deal is that there is little U.S. appetite left for believing Beijing’s promises, especially on national security. That is especially the case for Obama administration veterans who felt burned by China’s failure to stick to the 2015 hacking agreement. Throw in that the United States has said that it will raise issues on behalf of Canada and Australia, and the prospects for any meaningful cooperation look even poorer.

The Biden team is eager to show it’s tough on China, despite Republican allegations otherwise, and Blinken is fresh off a trip to shore up Asian alliances. The Chinese officials are operating in a political environment where any perceived concession to foreigners can be seized on by domestic enemies to undercut their careers.

And while China’s public tone has been relatively mild in the run-up to the Alaska meetings, including attempts—denied by the United States—to frame the meeting as an official strategic dialogue, the U.S. officials haven’t forgotten months of aggressive rhetoric and anti-American conspiracy theories.

Lines such as “the two sides should respect and treat each other as equals, enhance mutual understanding through dialogue, manage and dissolve differences and bring China-U.S. relations back to the right track” ring hollow when they come from spokespeople such as so-called wolf warrior—and prolific and offensive tweeter—Zhao Lijian. Zhao went on to describe the United States and Japan as “villains colluding together.”

Chinese interests in Myanmar. Security forces killed dozens of pro-democracy protesters during a bloody weekend in Myanmar, where the junta declared martial law in six districts after Chinese-owned factories were set on fire. Many protesters accuse China of supporting the military regime. China responded to the violence by demanding that the government in power—meaning the junta—do more to protect Chinese interests, furthering protesters’ anger with Beijing.

But China doesn’t have much of a choice. Either it puts pressure on the junta to act or it risks being seen as weak when it comes to protecting overseas Chinese interests and the diaspora, especially if violence escalates against people of Chinese heritage in Myanmar. Chinese communities in Southeast Asia often face discrimination and sometimes pogroms. Nationalists have accused the state of failing fellow Chinese in the past, notably during anti-Chinese riots in Indonesia in 1998.

Atlanta attacks. Meanwhile, the killing of seven women and one man, six of them of Asian descent, in Atlanta has again raised concerns about a sharp rise in anti-Asian hate crimes in the United States and the recent use of racist language, such as “China virus.” The killer’s motivation is still unknown, but Asian American women are particularly vulnerable to violence and racism. A Facebook post alleging that the killer made anti-China comments online is fake, seemingly originating from an account linked to Chinese propaganda.

Vaccine visas, with strings attached. China has partially eased its tight border controls, but only for people who have received Chinese-made COVID-19 vaccines. Epidemiologically, the decision makes little sense; China’s vaccines have consistently underperformed all others. But Beijing has distributed vast quantities of the vaccine for a diplomatic boost, especially to hard-hit Brazil, which seems to have changed its stance on Huawei.

Promoting the idea that Chinese vaccines are safer, while concealing lab results, is thus strategically important. State media has also promoted conspiracy theories about foreign vaccines, and I wouldn’t be surprised if Chinese state actors turned out to be behind some online disinformation.

China sat out the U.S. election. A comprehensive report by the U.S. National Intelligence Council declassified this week concludes that while Russia and Iran attempted to interfere in the 2020 U.S. elections, China played no major role. The findings contrast with claims made at the time by then-President Donald Trump’s intelligence officials. The report confirms what I wrote last year: that China didn’t particularly care who won on Nov. 3.

The apathy is in part because Chinese leaders genuinely view U.S. democracy as a sham, with parties and personalities a facade over the real class interests involved. But Beijing is also aware that the mood in Washington has shifted permanently against China, regardless of which party is in power. Chinese influence remains mainly directed at the business sector and the Chinese diaspora, not at electoral interference efforts.

Online platform crackdown. The state attack on Jack Ma’s Alibaba continues, with the firm now ordered to sell off its media holdings, though it’s not clear whether regulators are demanding a complete or partial divestment. Alibaba’s popular browser has also been removed from app stores. These moves, along with a statement by President Xi Jinping on Monday calling for regulatory action, presages a wider attack against companies seen as having too much online power, especially those with major platforms, such as Tencent’s WeChat.

The offensive also raises some puzzling questions. Platform dominance by big companies seems generally useful to the Chinese Communist Party, letting it push the burden of censorship onto a few actors who control internet access. As Ma’s silencing has proved, all of these companies are subordinate to the party’s power, forced to offer public apologies for straying.

It’s possible that there is genuine belief that monopoly power has gone too far, and that new businesses need to be given space to develop. But it’s also possible that Beijing simply fears too much power in any hands but its own, even those of companies that it can coerce and threaten.

Beijing’s desert storm. After years of improvement, Beijing’s air quality index reached horrifying new levels this week, with official readings topping out at 999 and private monitors recording heights in the 9000s—on a scale where 301 is hazardous. While air pollution has been bad in Beijing this winter, this latest event wasn’t caused by overproducing factories, but by a sandstorm that blew in from Inner Mongolia, swathing the city in a yellow haze that choked anybody foolish enough to venture outside.

Deforestation and soil loss have caused severe desertification in China, which the government has tried to counter through the establishment of a “great green wall” of new forests.

GDP anomaly. For the first time in decades, U.S. GDP growth may exceed China’s this year, with the U.S. economy predicted to grow at an auspicious 8 percent and China’s official target set at just 6 percent. Although there are clear excusing factors—the United States suffered more economically last year than China did—the projection is still likely to be a psychological shock in Beijing, as the country adjusts to slowing economic growth and analysts worry about falling into the middle-income trap.

Beijing and Shanghai’s 47 million people make up 3.6 percent of China’s population, but they dominate coverage of the country. There are more than 100 other cities in China with more than 1 million people. China Brief will profile some of them here. 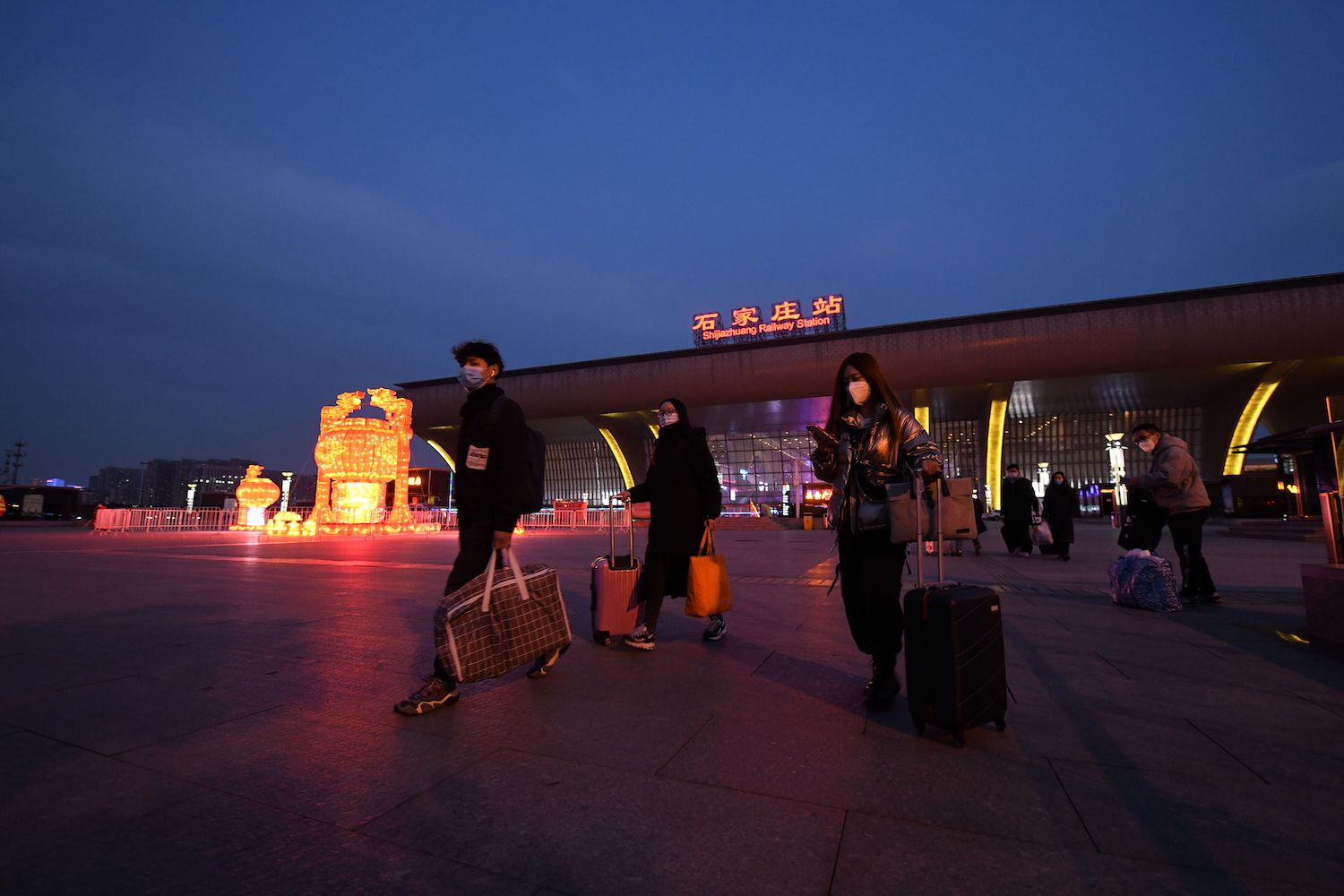 Some cities in China have a rich history, dating back millennia. Others are products of the 20th century, such as the country’s 12th-largest city, Shijiazhuang. Before 1905, Shijiazhuang was a local village of little import, but it happened to sit on a Belgian- and French-backed railway line from Beijing to Wuhan, making it an important junction for farmers and sparking an economic boom. Soon, another line connected the growing town to the northern city of Taiyuan, marking its transition into an industrial center.

Today, Shijiazhuang is the perfect example of a Chinese city that has millions of people, tons of manufacturing, a good provincial-rank university—and not much else going on, not least thanks to the presence of major cities nearby, such as Beijing and Tianjin. Shijiazhuang is the capital of Hebei province, but only by accident. During the Cultural Revolution, fighting in then-capital Baoding, an older city famous for its cuisine, was so intense it made governance there impossible. The administration moved to Shijiazhuang in 1968.

Since then, the most famous thing to happen in Shijiazhuang was a series of bomb attacks in 2001 that killed 108 people. Police blamed a laid-off worker supposedly angry with his family, but Shijiazhuang residents have a variety of theories as to who was really to blame, from Islamic terrorism to local real estate quarrels.

India Is Seeing a Terrifying Second Wave of COVID-19

‘The Taliban Have Tracked Me’