A country seen as a bulwark of stability faces mass unrest.

This week’s highlights: Simmering frustrations turn to anger in Senegal, why categorizing Mozambique’s insurgents as Islamic State terrorists could be misguided, Tanzania’s president is AWOL, and yet another African fintech unicorn takes off during the pandemic.

This week’s highlights: Simmering frustrations turn to anger in Senegal, why categorizing Mozambique’s insurgents as Islamic State terrorists could be misguided, Tanzania’s president is AWOL, and yet another African fintech unicorn takes off during the pandemic.

Senegal is experiencing its largest protests in decades. Thousands of mostly young people have taken to the streets, businesses have been looted, university students have pelted police with rocks, and the internet was shut down. At least eight people have died, and one senior official described the country as being “on the verge of an apocalypse.”

The protests began on March 3 as opposition leader Ousmane Sonko made his way to court to face rape charges. When the 46-year-old stopped to greet his supporters lining the streets, police arrested him for disturbing public order. By the time Sonko appeared in court on March 8, his supporters had unleashed chaos on the streets of Dakar and in other cities across the country.

Anti-France. As angry protesters moved through the capital and smaller cities, they tellingly targeted French-owned businesses and retail brands. Total gas stations were burned down, and more than a dozen supermarkets of the Auchan chain were looted. Protesters accused the group of undercutting local producers and merchants who have been hit hard by COVID-19 lockdown regulations.

Toll gates managed by a French firm were also destroyed, seen as a symbol of the economic divide between those who can afford the fee and those who can’t. Senegal is home to France’s largest embassy in Africa, and the country—like many of its neighbors—still uses the colonial-era CFA franc, a currency linked to the French economy. With French troops stationed in the country, Paris also considers Senegal’s President Macky Sall as a key ally in Africa, which may no longer count in his favor among young voters.

Anti-Sall. With a stagnant economy and high youth unemployment, Sonko was able to galvanize his supporters due to mounting frustration with Sall. There has been growing uncertainty in Senegal over whether Sall will indeed step down when his second term ends in 2024.

Sall, who came to power in 2012, has earned a reputation for elbowing his political opponents out of the way. In 2007, Sall—then prime minister—summoned rival Karim Wade to testify in parliament over corruption allegations. In 2018, a new rival, Dakar Mayor Khalifa Sall (no relation) was tried and jailed for corruption, only to have the president pardon him a year later. Now, Sonko is accusing Sall of using rape charges to remove him as a competitor.

A popular new leader. Released on bail, Sonko is pushing for more protests. Sonko first came to prominence in 2014, after President Sall dismissed him as tax inspector for openly criticizing the government. Sonko formed a new party and came third with 16 percent of the vote in 2019, not far behind the veteran politician Idrissa Seck. Ahead of the 2024 election, Sonko has accused Sall of using the criminal charges to prevent him from running, after parliament stripped Sonko of his immunity. His supporters believe him and have heeded calls to continue protests.

Gendered politics. Sonko is accused of raping and threatening a 20-year-old massage therapist. The survivor has been publicly named and “dragged through the mud by the press and her life put on display for public consumption, while Ousmane Sonko has been painted as innocent before any legal inquiry,” said Senegalese academic Rama Salla Dieng.

Senegal’s feminist thinkers and women protesters have begun to question the politicization of violence against women in a country that already fails to seriously prosecute rape and gender-based violence cases. While the protests have grown to encompass much more than defending Sonko, activists fear that it will erase the rape case at the center of the outcry.

“There are rape apologists in that [crowd] of people the Senegalese government is shooting at. How do we reconcile the pain of seeing the military attack unarmed civilians, while hearing the names of our own abusers in the chants of the protestors?” asked Haddy Jatou, a feminist in neighboring Gambia.

In foreign capitals, the unrest has raised many questions about the stability of a country that has long been seen as a bulwark of democracy in West Africa, but it has also revealed uncomfortable questions that Senegal’s citizens and leaders must confront themselves.

Friday, March 19: Ministers in the Sahel region meet with the European Commission.

Sunday, March 21: The Republic of Congo holds its presidential election.

Terrorism status in Mozambique. The U.S. State Department designated the insurgent fighters in Mozambique as a Foreign Terrorist Organization, according to the Immigration and Nationality Act. Along with the Allied Democratic Forces in the Democratic Republic of the Congo, the group was designated a terrorist organization over its affiliation with the Islamic State Central Africa Province.

Among other consequences, this means that any financial facility handling the group’s finances could face U.S. sanctions. The move bolsters the idea that the Islamic State is behind the violence in Mozambique, even though there is little evidence confirming this. 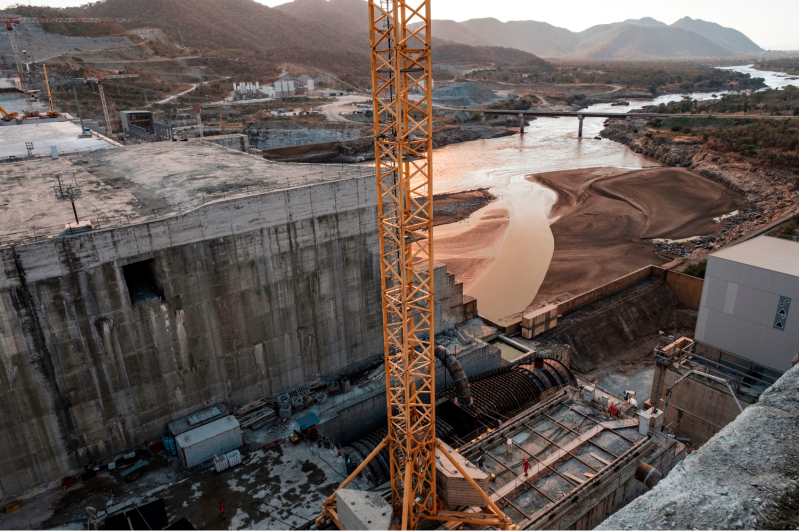 A view of the Blue Nile river as it passes through the Grand Ethiopian Renaissance Dam near Guba, Ethiopia, on Dec. 26, 2019.EDUARDO SOTERAS/AFP via Getty Images

Egypt and Sudan pressure Ethiopia. In his first visit to Sudan since 2019, Egyptian President Abdel Fattah al-Sisi ramped up pressure on Ethiopia over the controversial Grand Ethiopian Renaissance Dam. Cairo and Khartoum are calling for renewed negotiations, sponsored by the African Union and supported by the United States, European Union, and United Nations—at a time when Ethiopia is consumed with internal conflict.

Sudan fears that Ethiopia’s hydroelectric dam could have an adverse impact on its own dams further downstream or flood communities along the river. Cairo has increasingly sought Khartoum’s support. During Sisi’s visit, the two countries also signed a military cooperation agreement.

Has COVID-19 caught up with Magufuli? Last spotted in Dar es Salaam, Tanzania, on Feb. 27, Tanzanian President John Magufuli’s disappearance from public view has fueled rumors of ill health. Magufuli, who has been Tanzania’s chief COVID-19 denialist, was rumored to be in a hospital in Nairobi with coronavirus symptoms. Then, the country’s opposition leader Tundu Lissu told journalists the president was in an Indian hospital in a coma.

Prime Minister Kassim Majaliwa dismissed the rumors as “hateful,” saying instead that the president was working indoors. Tanzanian police also arrested a man for posting on social media that the president is ill, and authorities threatened to detain anyone else who did so.

Mauritius locks down. On March 10, the island nation imposed new lockdown measures in a bid to restrict the spread of the coronavirus pandemic. Mauritius has recorded an uptick in infections. That number, 14, brings the total number of cases recorded there since the start of the pandemic to 742.

It’s a fraction of what countries on continental Africa have experienced, but it underscores the importance of thorough vaccine rollouts. The island of 1.26 million people has vaccinated only 0.3 percent of its population, making it vulnerable to any outbreak.

South African students protest. In a near-annual event, South Africa’s youth continue to demand the country make good on a constitutional promise of free education. The South African Union of Students wants 13 billion rand ($867 million) in student debt canceled and free education for the poor. Last week, the protests turned violent, with police shooting a bystander. It galvanized students across the country, and on March 15 several universities joined in a nationwide shutdown, blocking streets around campuses.

Blue helmets across the continent. As the U.N. Security Council votes to extend the nearly 20,000-member mission in South Sudan for an extra three years, the number of peacekeepers across the continent remains in the tens of thousands, more than anywhere else in the world.

Another African unicorn. This week, fintech company Flutterwave announced $170 million in series C funding from international investors. The company is now valued at over $1 billion, earning it the “unicorn” start-up label.

Founded in Nigeria by a group of former bankers in 2016, Flutterwave creates payment solutions for businesses, allowing easy and reliable payments across borders. In this way, it is able to connect a retailer in Ghana to a customer in Rwanda, for instance. It has done so for 290,000 merchants so far—a testament to the need for financial solutions on the continent.

“Flutterwave’s job is to be what we call ‘the center point’—the plumbing of African payments infrastructure,” CEO and founder Olugbenga Agboola told Quartz.

On racism, Americans should learn from abroad. South Africa, Brazil, and Colombia all offer examples to the United States as it comes to grips with a legacy of racial injustice, Eduardo González and Kelebogile Zvobgo write in Foreign Policy.

Biafran War injustices. Remembrance ceremonies, apologies, or outward symbols will not heal Nigeria’s wounds from the Biafran War that tore the country apart from 1967-1970. “It is merely a symbolic exercise that fails to confront a violent system,” Benjamin Maiangwa and Chigbo Arthur Anyaduba argue in the Conversation.

Symbolic change. In its 75 years, the United Nations has never had a woman secretary-general, but as Rasna Warah explains in Africa Is a Country, changing the gender of its leader won’t change the culture of the U.N.

For more from Foreign Policy, subscribe here or sign up for our other newsletters. You can find older editions of Africa Brief here. We welcome your feedback at africabrief@foreignpolicy.com.

NEW FOR SUBSCRIBERS: Want to read more on this topic or region? Click + to receive email alerts when new stories are published on Politics, Africa

From Pushkin to Putin: A Trail of Russian Imperialism

From Pushkin to Putin: A Trail of Russian Imperialism