Austin and Blinken are trying to get U.S. allies in the region on the same page. It’s easier said than done.

Welcome to Foreign Policy’s Security Brief. This week, we have a special dispatch from 13 time zones away, as Jack accompanies U.S. President Joe Biden’s defense secretary on a tour across Asia.

Welcome to Foreign Policy’s Security Brief. This week, we have a special dispatch from 13 time zones away, as Jack accompanies U.S. President Joe Biden’s defense secretary on a tour across Asia.

A Dispatch From the Asia Pivot 2.0

When you travel with top U.S. officials to visit American treaty allies in Asia, you hear more happy talk than at a get-rich-quick seminar. For the last week, I’ve been traveling through Asia on Lloyd Austin’s “doomsday plane,” covering his maiden voyage abroad as President Joe Biden’s defense secretary.

The last five days have been a swirl of high-flying selfies over Tokyo and Seoul in Blackhawk and Chinook helicopters, watching Austin zoom in a convertible around South Korean troops in 15th-century dress on a soccer field, and hearing top officials say over and again that Japan and South Korea are “cornerstones” and “linchpins” of the U.S. strategy in Asia as the Biden administration ramps up the tough talk against global superpower rival China.

But behind the swagger, there’s something else that officials aren’t saying out loud—or on the record, anyway: Alliances, like any relationship, are hard.

An Indo-Pacific strategy, if we can keep it. Some on the U.S. side have long been pushing Japan to spend more on defense, modernize military facilities, and allow for the dispersal of American forces within China’s missile range. No dice. The United States has been pushing South Korea to start thinking more regionally, beyond military scenarios with its nuclear-armed northern neighbor, North Korea. It hasn’t.

And Seoul and Tokyo don’t get along, due to deep-seated and unresolved historical tensions, which adds yet another layer of complexity. “There’s an ancient wound between those two countries, several wounds, that has not fully healed, and can be quite frankly politically expedient for both countries to use,” a senior defense official said.

Outstanding questions. Even standing under the U.S. nuclear umbrella, officials here will tell you there’s only so far these allies can be pushed. There’s no equivalent of NATO’s 30-nation Article 5 mutual-defense pact in Europe. As both Austin and Blinken return home (with the latter set to go toe-to-toe with Chinese diplomats in Alaska) and review U.S. policy toward China and North Korea, as well as the U.S. troop presence around the world, they will also have to figure out what the Biden administration wants its Asia policy to look like in the future.

Will it include pressing South Korea to join the so-called Quad countries—the United States, Japan, India, and Australia? What does a realistic multilateral strategy to pressure Beijing look like?

What’s clear for now, despite some minor hiccups on the trip, is that Biden is trying to turn the page from former President Donald Trump’s “America First” era, even if he adopts Trump’s overall posture on China. “I think that the Biden administration is going to characterize their relationship with foreign allies as being different in tone and tenor,” said Heino Klinck, who was deputy assistant secretary of defense for East Asia until January. “If that’s their differentiation strategy, I’m okay with that.”

New top trade official. Biden’s pick to be U.S. trade representative, Katherine Tai, was confirmed by the Senate by a vote of 98-0 on Wednesday. Tai, a critic of China’s trade practices, is the first Asian American and first woman of color to be the top U.S. trade official.

DARPA gets new director. The Pentagon’s cutting-edge research arm, the Defense Advanced Research Projects Agency, has a new leader: Stefanie Tompkins was sworn in on Monday as new DARPA director.

New State Department nominee. Biden on Wednesday nominated Jose Fernandez to be undersecretary of state for economic growth, energy, and the environment. Fernandez, a partner at law firm Gibson, Dunn & Crutcher, previously served as a senior State Department official in the Obama administration.

USAID moves. Gideon Maltz is joining the U.S. Agency for International Development as chief of staff, the new gatekeeper for Samantha Power, nominee to be Biden’s USAID chief if she clears Senate confirmation. Her confirmation hearing is scheduled for March 23. USAID also announced a raft of other senior staff joining the Biden administration, including Travis Adkins as deputy assistant administrator in the Bureau for Africa.

Weekend warrior. Biden is dispatching one of his top allies on Capitol Hill, Sen. Chris Coons, to Ethiopia this weekend to urge an end to the conflict in northern Ethiopia, as Robbie scooped today. Coons, once a top contender for Biden’s secretary of state slot, is delivering some tough messages from Biden to Ethiopian Prime Minister Abiy Ahmed to find a way to end the conflict and open humanitarian access to the country’s Tigray region as reports spread of civilian massacres and other civilian atrocities there. The big fear in Washington is that things could get a lot worse if left unchecked, and instability could spill over beyond Ethiopia’s borders—which is the last thing that the chronically unstable Horn of Africa region needs. 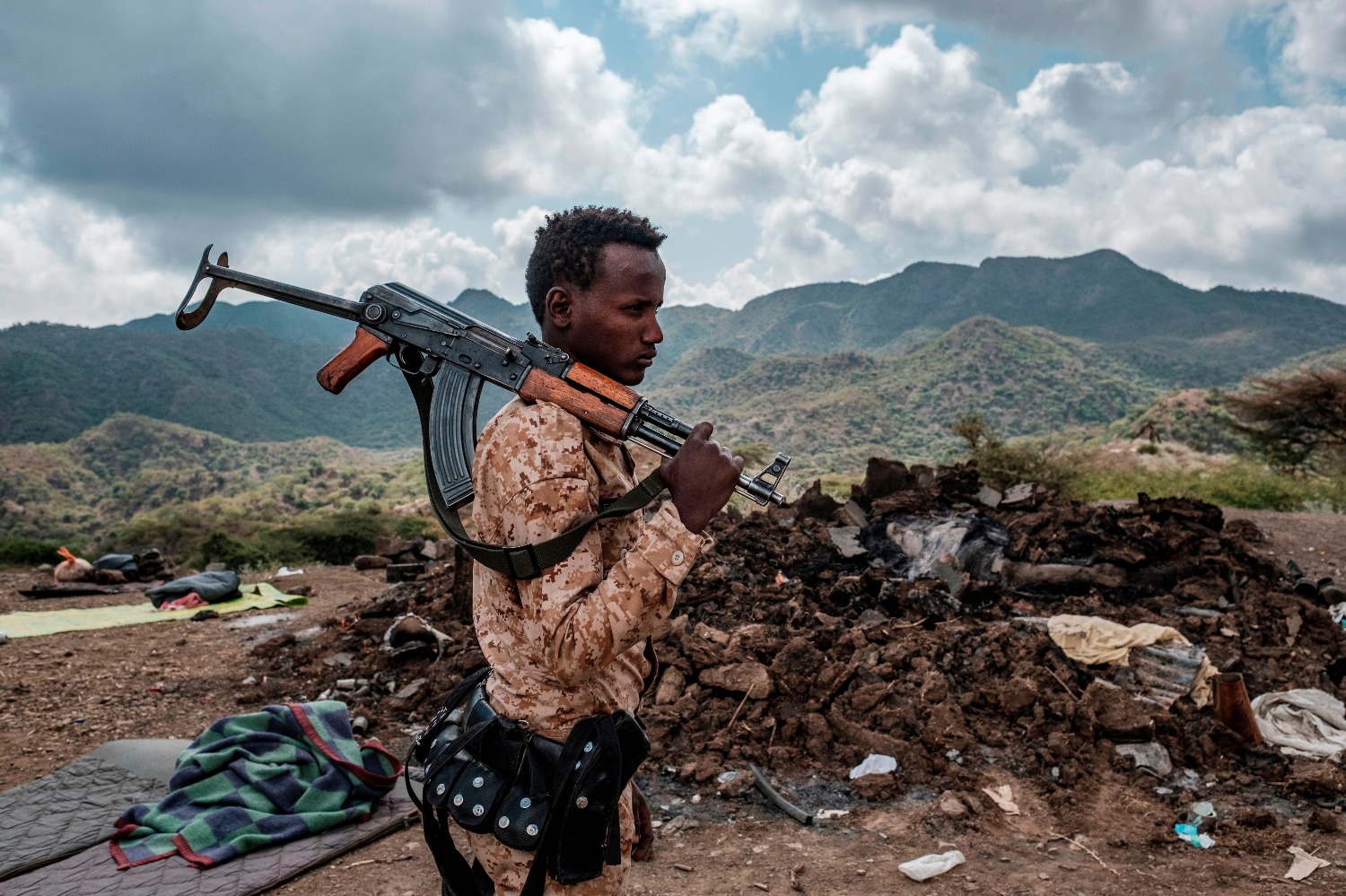 A member of the Afar Special Forces stands in front of the debris of a house in the outskirts of the village of Bisober, Tigray region, Ethiopia, on Dec. 9, 2020.Eduardo Soteras/AFP via Getty Images

NatSec world speaks out against hate. The murder of eight people in Atlanta on Tuesday—including six Asian American women—is sparking renewed attention on hate crimes in the United States and adding urgency to ongoing debates about diversity in the national security community. A statement signed by dozens of national security professionals released on Thursday called out discrimination against Asian Americans, worsened by the rhetoric around U.S. competition with China.

“[T]he xenophobia that is spreading as U.S. policy concentrates on great power competition has exacerbated suspicions, microaggressions, discrimination, and blatant accusations of disloyalty simply because of the way we look,” the signers wrote. “Many of us have been targeted because we are either ethnically Chinese or simply look Asian.”

Sad Vlad. Russian President Vladimir Putin is firing back after Biden referred to him as a “killer” in a recent television interview. Russia went as far as to recall its ambassador in Washington, Anatoly Antonov, for consultations, underscoring how precarious U.S.-Russia relations are for the new U.S. president.

Putin, of all people, insisted that Biden was the real one at fault for bloodletting. “I remember in my childhood, when we argued in the courtyard with each other we used to say: It takes one to know one,” Putin said. “And that’s not a coincidence, not just a children’s saying or joke. The psychological meaning here is very deep.”

We Asked, You Answered

The Pentagon is changing the names of U.S. military bases currently named after Confederate generals. Last week, Security Brief asked you for proposals for new names, and we got a flood of great responses. Here are just some of our favorite ideas from our readers:

Richard K. suggested Julius Becton, a highly decorated veteran of the Korean and Vietnam wars who rose through the ranks to become the sixth African American to obtain the rank of brigadier general.

Other suggestions we’ve heard: William H. Carney, a U.S. Army sergeant in the Civil War who was born a slave and became the first-ever African American service member to earn a Medal of Honor; Grace Hopper, former U.S. Navy rear admiral and a pioneering computer programmer; Richard Winters, commander of the famous “Band of Brothers” Easy Company in the 101st Airborne division that fought in World War II; and Lucian Truscott, who commanded a division, corps, and army in the Second World War. Several suggested naming bases after decorated veterans of the Tuskegee Airmen or the famed 442nd Infantry Regiment—a segregated Japanese American unit that became the most decorated unit of its size in World War II.

Thanks to all who submitted their ideas! We’ll be back next week with another survey for our readers.

Thomas Melia, Washington director of PEN America, is moving to Capitol Hill to serve as senior foreign-policy advisor to Maryland Sen. Ben Cardin. Melia previously served in senior positions at the State Department and USAID during the Obama administration.

Carol Giacomo joins the Arms Control Association as chief editor for Arms Control Today. Giacomo was former diplomatic correspondent for Reuters and member of the New York Times editorial board.

“We take this opportunity to warn the new U.S. administration trying hard to give off [gun] powder smell in our land. … If it wants to sleep in peace for the coming four years, it had better refrain from causing a stink at its first step.”

Finer dining. The Army is looking to rebrand its base cafeterias as “warrior restaurants,” as Chad Garland reports in Stars & Stripes. And because this is the military, it needs to come with an onerous and aggressive acronym: the ACTION—Army Commitment To Improving Overall Nutrition—plan. This rebrand appears to be the brainchild of the Army’s Joint Culinary Center of Excellence, because of course that’s a thing.