What to Expect From Lloyd Austin’s Trip to India

Pentagon messaging suggests the visit could kick-start a new phase in security ties.

In India, Austin Looks to Consolidate the Gains of the U.S.-India Security Partnership

In India, Austin Looks to Consolidate the Gains of the U.S.-India Security Partnership

U.S. Secretary of Defense Lloyd Austin begins a three-day visit to India on Friday, part of his first overseas trip as Defense Department chief—and the first appearance in India by a top Biden administration official. Austin’s visit underscores the importance that U.S. President Joe Biden accords to India, especially to its defense relationship with the United States.

The U.S.-India security partnership enjoys strong bipartisan support in Washington, and it has grown significantly since the early 2000s, mainly because of shared concerns about China’s rising power. Even during the turbulent Trump era, Washington’s relations with New Delhi continued to flourish—one of the few key U.S. bilateral partnerships that didn’t experience major stress.

Austin’s visit will include discussions on China, Afghanistan, and the Indo-Pacific region. But Pentagon messaging suggests it is also intended to kick-start a new phase of the U.S.-India security partnership—one that aims to operationalize the gains made through years of arms sales, technology transfers, defense agreements, and Washington’s 2016 designation of India as a “major defense partner.”

This transition is already afoot. Recent years have seen expanded bilateral military exercises, joint training of international peacekeeping troops, and new arrangements enabling the two navies to refuel each other’s warships. Likely because of growing concerns about China’s muscular moves in the region, the Biden administration appears keen to accelerate it.

In a March 13 call with reporters, David Helvey, the acting U.S. assistant secretary of defense for the Indo Pacific, said Austin will meet with his Indian counterpart, Rajnath Singh, to discuss “enhanced information sharing, regional security cooperation, defense trade, and cooperation in new domains.” India’s defense ministry issued a similar message on March 17, adding that officials will discuss how to “consolidate military-to-military cooperation.”

This emphasis on operationalization could address one of the U.S.-India security relationship’s fundamental challenges: how to move a fast-growing security partnership forward, outside of the alliance system that Washington favors for its top defense partners but that New Delhi rejects. India’s own foreign policy is guided by the principle of strategic autonomy, emphasizing independence and flexibility in world affairs—not getting entangled in alliances.

The Biden administration also seeks to help strengthen India’s defense industrial base so it’s better equipped to partner with the U.S. military. This would help address a concern that platforms-focused conversations often eclipse missions-focused ones, particularly between the two navies.

Finally, Austin’s visit may address another key obstacle for the security partnership: a long-standing disconnect over geographic priorities. Washington views East Asia, and especially the South China Sea, as its area of biggest strategic concern. But New Delhi, wary of the threats posed by China and Pakistan along its borders and coastlines, prioritizes the western areas of the Indian Ocean region.

U.S. officials have long recognized the Indian Ocean’s strategic significance along the Horn of Africa, where China uses its waters for sea-based commerce and has built a military base in Djibouti. But the region isn’t often mentioned in high-level messaging about U.S.-India cooperation. This time though, a Pentagon press statement about Austin’s trip says he will discuss increasing bilateral cooperation in both the Indo-Pacific and Indian Ocean regions.

While sound, the U.S.-India relationship does face challenges, from trade disagreements to partnerships that each side has with the other’s rivals. (India has a long-standing defense relationship with Russia, and the United States works closely with Pakistan’s military.) Defense ties have long been the sweet spot for the two countries, underscoring the importance of tackling any security obstacles. Austin’s India visit can help move that needle forward.

March 23: The United Nations Security Council holds a debate on the U.N. mission in Afghanistan.

March 24: Foreign Policy hosts a virtual dialogue on how the Afghan peace process will shape the U.S. role in the world. Speakers include Michael Kugelman, Lisa Curtis of the Center for a New American Security, Laurel Miller of the International Crisis Group, and Will Ruger of the Charles Koch Institute.

Uphill peace diplomacy. Zalmay Khalilzad, the U.S. special envoy for Afghan reconciliation, has launched a diplomatic offensive in Afghanistan and beyond to encourage the Biden administration’s new plan for an accelerated peace process. He has met leaders in Kabul and Islamabad and Taliban representatives in Doha. He also attended a conference in Moscow with Afghan, Chinese, Pakistani, and Russian officials and Taliban leaders.

Khalilzad has a tough job ahead. The new peace plan calls for the establishment of an interim government in a matter of weeks, charged with negotiating peace and a new constitution. Some Afghans are skeptical of the plan’s tight timeline. Others worry about the risks of including the Taliban in an interim government. And a group of Afghan women’s organizations released a letter decrying their lack of consultation with Afghanistan’s public.

Laurel Miller and Andrew Watkins warned in Foreign Policy this week that even if the plan is successful, the “result will be worse than this gambit failing.”

Indian vaccine executives speak out. Officials from two Indian vaccine manufacturers are concerned that Washington’s invocation of its Defense Production Act, which limits the exports of critical materials to focus on domestic demand, will hamper efforts to meet global COVID-19 vaccine demand. “We are talking about having free global access to vaccines, but if we can’t get the raw materials out of the U.S., that’s going to be a serious limiting factor,” Adar Poonawalla, chief executive of India’s Serum Institute, told the Financial Times this week.

Ironically, these concerns surfaced soon after the Quadrilateral Security Dialogue, or the Quad, countries announced a new joint initiative to develop, manufacture, finance, and deliver 2 billion vaccines to the Indo-Pacific region. For all the recent talk of pandemic cooperation and vaccine diplomacy, pandemic competition and vaccine nationalism remain stubborn realities. 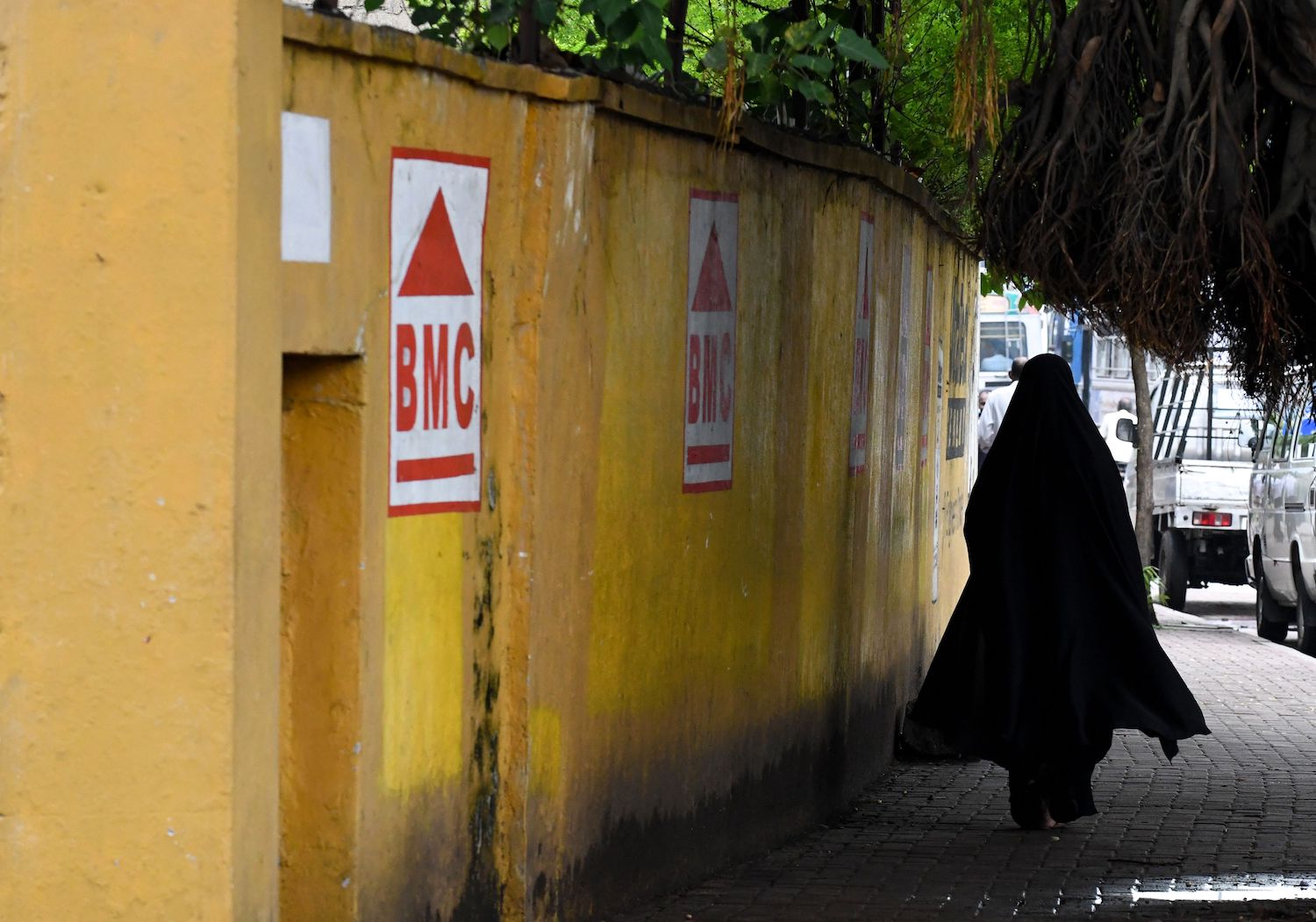 A woman walks along a road in Colombo, Sri Lanka, on April 30, 2019.LAKRUWAN WANNIARACHCHI/AFP via Getty Images

Sri Lanka’s proposed burqa ban. On March 13, Sri Lanka’s public security minister announced a proposal to ban burqas on national security grounds. The measure requires approval from the cabinet and Parliament, where the ruling party has a two-thirds majority. The proposed ban comes on the heels of other policies that appear to discriminate against Sri Lanka’s Muslim community, which makes up around 10 percent of the population.

A burqa ban would spark global criticism as well. Perhaps reading the writing on the wall, the foreign ministry issued a statement on March 16 clarifying that Colombo will seek dialogue, consultations, and consensus “with all parties concerned” before moving forward.

India’s drone acquisitions. Next month, India will approve a $3 billion purchase of 30 armed drones from U.S. defense company General Atomics. The acquisition reflects India’s robust presence in the global arms markets. New research shows it was the world’s second-largest importer between 2016 and 2020. Indian acquisitions from the United States have increased dramatically: The value of India’s U.S. arms imports rose from $6 million in 2019’s fiscal year to more than $3 billion in 2020.

The drone purchase will worry Pakistan, as its more powerful rival gains more military capacity. Each drone can travel for about 48 hours and carry a payload of nearly 4,000 pounds. The crafts will enhance the capacities of India’s navy to monitor Chinese warships and of the army to target threats along the India-Pakistan border.

News of the purchase surfaced just months after India inked an accord with Washington that enables the U.S. military to share sensitive geospatial data with New Delhi—a development that, according to Pakistani security analysts, widens the disparity between Indian and Pakistani conventional force strength and undermines “strategic stability” in South Asia.

“Only we can face and force our leaders, elected and non-elected, to deliver a much-needed peace, but we continue to be locked out of the room.”

—A March 14 statement from Afghan women’s groups arguing that the new U.S. peace plan excludes the views of women and common Afghans

A new Carnegie Endowment paper by Vijay Gokhale, a former Indian foreign secretary and noted China analyst, argues that the deadly India-China border clash beginning May 2020 was not wholly unexpected. Gokhale asserts that misperceptions stretching back for a decade had teed up a serious crisis. “The most fundamental misperception between the two countries is the inability to comprehend each other’s international ambitions, yielding the fear that their foreign policies are targeted against the other,” Gokhale wrote.

Gokhale argues that bilateral relations can rebound if each country endeavors to better understand the other’s policies. It’s a welcome optimistic view that speaks to an ongoing debate in India about the need for more China expertise. However, the tense dynamics of the relationship—two bitter rivals sharing a disputed border and still reeling from the 2020 clash—suggest that a thaw in relations will require more than simply understanding each other better.

NEW FOR SUBSCRIBERS: Want to read more on this topic or region? Click + to receive email alerts when new stories are published on Security, India, South Asia

What a ‘Minor’ Russian Incursion Into Ukraine May Look Like

What a ‘Minor’ Russian Incursion Into Ukraine May Look Like