A new book on Trump’s failures underscores just how tough it is to get Beijing right.

How should the Biden administration handle its inaugural meeting with Chinese officials in Alaska today? Based on his new book, Chaos Under Heaven: Trump, Xi, and the Battle for the Twenty-First Century, it’s easy to guess how Josh Rogin, a Washington Post columnist, would answer the question: U.S. Secretary of State Antony Blinken and National Security Advisor Jake Sullivan should confront their Chinese counterparts as aggressively as possible.

Chaos Under Heaven is really two books knit into one. The first, as the subtitle suggests, is a narrative account of the Trump administration’s bizarrely inconsistent and often-baffling approach to China over the past four years. In telling that story, however, Rogin has a larger mission: to describe how he and other Americans first awoke to the China threat—“the most important foreign policy issue in the world”—and to shake the rest of us out of our slumber.

How should the Biden administration handle its inaugural meeting with Chinese officials in Alaska today? Based on his new book, Chaos Under Heaven: Trump, Xi, and the Battle for the Twenty-First Century, it’s easy to guess how Josh Rogin, a Washington Post columnist, would answer the question: U.S. Secretary of State Antony Blinken and National Security Advisor Jake Sullivan should confront their Chinese counterparts as aggressively as possible.

Chaos Under Heaven is really two books knit into one. The first, as the subtitle suggests, is a narrative account of the Trump administration’s bizarrely inconsistent and often-baffling approach to China over the past four years. In telling that story, however, Rogin has a larger mission: to describe how he and other Americans first awoke to the China threat—“the most important foreign policy issue in the world”—and to shake the rest of us out of our slumber.

Rogin deftly weaves the two threads together, and his book, which is well-observed and thoughtful, does a good job making sense of former U.S. President Donald Trump’s confusing and contradictory interactions with Beijing. As Rogin explains, if the administration often seemed to be running multiple China policies at once, that’s because journalists and analysts were paying attention to the wrong signals and listening to the wrong people.

Not that you can blame them: On China policy, the Trump team was split into at least five camps. There were the superhawks (led by former National Security Advisor John Bolton), the hard-liners (the most vocal of whom were then-Director of Trade and Manufacturing Policy Peter Navarro, White House Chief Strategist Steve Bannon, and Deputy National Security Advisor Matthew Pottinger), the Wall Street clique (then-Director of the National Economic Council Gary Cohn and Treasury Secretary Steven Mnuchin), the axis of adults (former National Security Advisor H.R. McMaster and Secretary of Defense James Mattis), and Trump’s billionaire buddies (especially the casino moguls Sheldon Adelson and Steve Wynn). Each camp favored a different approach to Beijing, and each regularly spoke to the press as though theirs was the prevailing policy. 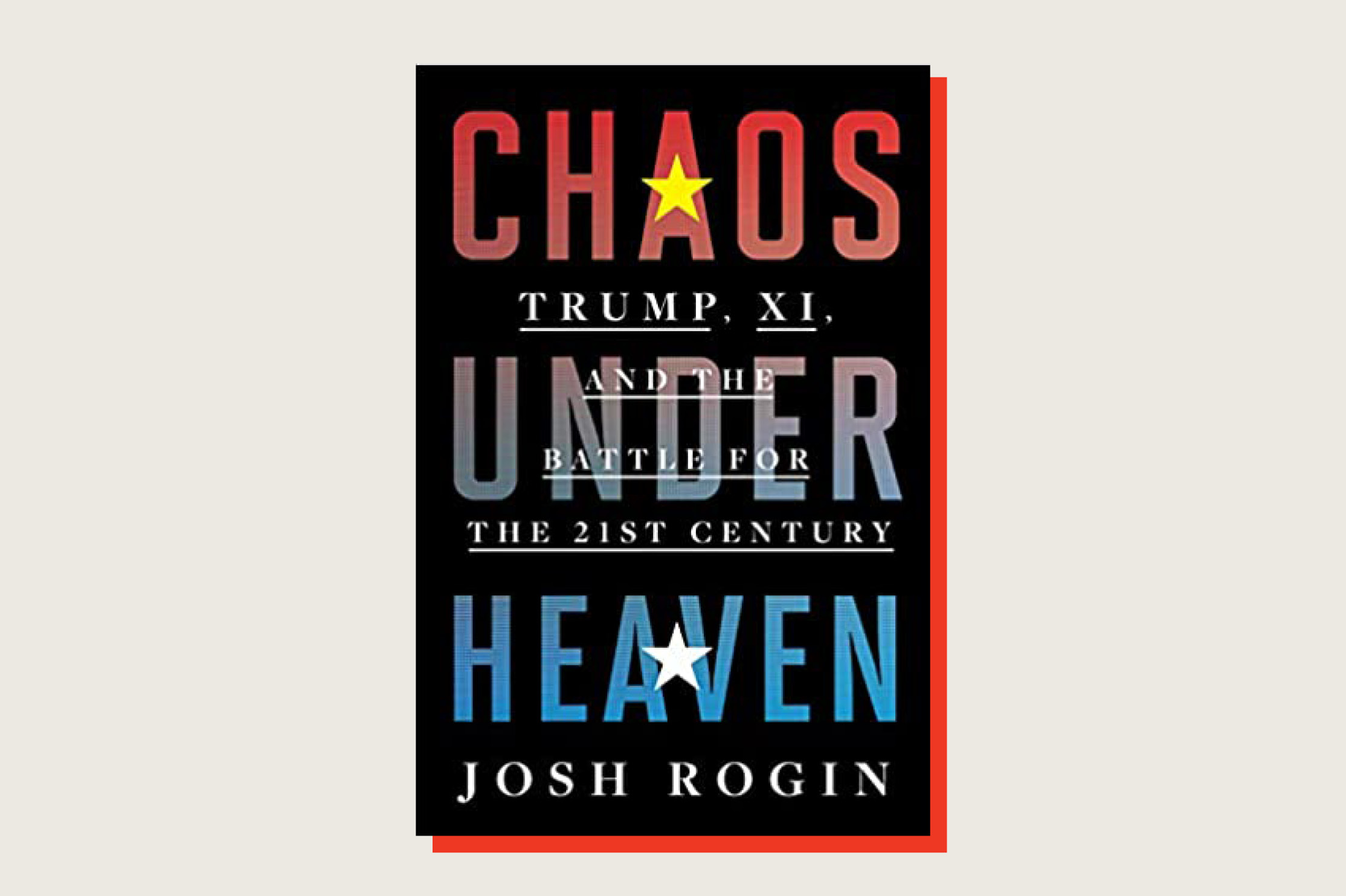 Adding to the confusion, Trump himself never really chose sides. His only conviction about China was that the country had long been screwing the United States through unfair trade practices, and his only priority was negotiating a deal to set new, more favorable terms for the relationship. It really was that simple. Although the president’s apparent mood swings, sometimes within the same day, “ensured that nobody ever really knew what his China policy was,” Rogin suggests that Trump actually had “a firm view on China, an outlook that he brought into his presidency.” That view stayed consistent even as Trump pitted his advisors against one another “because he wanted them to compete to serve him ideas that fit his vision, not because he didn’t know what he wanted.” So when “trade talks were going poorly, Trump would lift the valve a bit and let some initiatives to confront Chinese bad behavior spill out into the open. When the trade talks were going well …Trump would shut down the anti-China measures” and undermine their proponents.

Although Trump may not have favored any one camp, Rogin clearly did: The hard-liners, who were led by Pottinger, the book’s real hero and the source of much of Rogin’s reporting. In his account, these were the only honest brokers in the whole China debate. The book goes to great lengths to imply that anyone who dissented from the hard-liners’ approach—from Obama administration officials like U.S. Secretary of State John Kerry and National Security Advisor Susan Rice to Trump officials such as Cohn and Mnuchin to outsiders like Neil Bush, Henry Kissinger, World Bank President Jim Kim—was somehow compromised or corrupt. Not even Anthony Fauci, the director of the U.S. National Institute of Allergy and Infectious Diseases, escapes without an accusation of conflict of interest. The one strange exception is Trump himself, who, despite all the missteps Rogin recounts—from being snookered into believing Chinese President Xi Jinping was a real friend to shamefully endorsing China’s Uyghur detention camps to his inexcusable racializing of U.S.-Chinese tensions, which bore horrible fruit in Atlanta this week—escapes the scorn, opprobrium, and high moral dudgeon Rogin reserves for moderates who favored engagement.

So what did Pottinger and the hard-liners get so right? In Rogin’s view, only they saw China’s leadership for what it has become—mendacious, immoral, and bent on domination—and only they, as realists, understood that there was no point in trying to get Beijing to change. What the United States should do instead, they argued, was “deal with the reality of China, to focus on stopping the worst of its behaviors and building resilience against the rest.”

Thanks to Trump’s lack of focus, the hard-liners made only limited progress in changing U.S. policy during the course of his administration—although the president did adopt some of their recommendations toward the end of his term, when it finally became clear that his hoped-for trade deal was dead and the coronavirus had poisoned relations between the two countries.

Of course, Trump is now gone, but China isn’t. So what should the United States do next? Chaos Under Heaven does a good job framing the problem, and Rogin gets many things right. He’s correct, though hardly alone, in pointing to the many ways in which China’s turn toward inward oppression and outward aggression demand a very different approach from the United States. And the moral clarity and depth of conviction with which he makes this case are impressive. (Full disclosure: Rogin is a former Foreign Policy employee, and though we never overlapped, we have a friendly acquaintance. I also admire his doggedness as a reporter and his ability to generate scoop after scoop.)

But his single-mindedness doesn’t always serve the book or its reader very well. For starters, it’s not clear who still needs awakening to the China threat. Certainly not the Biden administration, which has set a strikingly combative tone ahead of this week’s meetings. Nor does the U.S. public seem to need much convincing; according to a new Gallup poll, nearly half of U.S. citizens now rank China as the top threat facing the United States, more than double the total from just last year.

Rogin’s own intrepid reporting may help explain that shift and deserves some credit for it. The bigger challenge with Chaos Under Heaven is that, beyond a few sensible suggestions in the epilogue (such as shoring up Western democracies, retaining existing trade sanctions for leverage, countering Chinese espionage, and requiring more transparency regarding the foreign funding of U.S. institutions), it never quite makes the case that confronting China must be “the top priority in our foreign policy, not to be subjugated for the benefit of any other issue.” Ranking China that high would put it above existential threats, both literal—climate change—and political—the U.S. economy. The only reason to do so would be if China was also an existential threat. But Chaos Under Heaven isn’t convincing on this point. That’s understandable; as Doug Bandow argued in Foreign Policy recently, while Washington should find Beijing’s behavior concerning on all sorts of levels, China is still far from threatening the United States’ fundamental safety and security the way the Soviet Union did during the Cold War.

Of course, journalists can avoid the trade-offs government officials must make every day. But the Biden administration will never manage to tackle some of its top priorities like reining in emissions and preventing future pandemics without China’s willing participation. Getting that, while simultaneously pushing back against Beijing’s bad acts, will take nuance and flexibility. Rogin seems to have little patience for such complexities. While we should be grateful to him for sounding the alarm, we should also be glad the Biden administration—which has said its relationship with China “will be competitive when it should be, collaborative when it can be, and adversarial when it must be”—seems to have the stomach for striking the very compromises Rogin so dislikes.

Jonathan Tepperman is a former editor in chief of Foreign Policy and the author of The Fix: How Countries Use Crises to Solve the World’s Worst Problems. Twitter: @j_tepperman

China’s Neighbors Are Stronger Than We Think

All across the Indo-Pacific arc, countries are beefing up their defenses.

America Will Only Win When China’s Regime Fails

There are two possible outcomes of U.S.-China competition—but Washington should prepare for the more turbulent one.

The U.S. Shouldn’t Be Afraid of China

Overreaction may be more dangerous than Beijing itself.