China Hits Back at Western Sanctions

With officials held to account for atrocities in Xinjiang, Beijing has enacted scattershot retaliatory measures against U.S. allies.

The highlights this week: Beijing issues sanctions against Western politicians and diplomats, authorities censor coverage of a mysterious explosion in a village near Guangzhou, and China grapples with vaccine diplomacy woes.

The highlights this week: Beijing issues sanctions against Western politicians and diplomats, authorities censor coverage of a mysterious explosion in a village near Guangzhou, and China grapples with vaccine diplomacy woes.

China responded to coordinated sanctions by the United States, the European Union, Canada, and the United Kingdom against Chinese officials involved in atrocities in Xinjiang with its own targeted figures, ranging from German politicians to Swedish researchers. Beijing’s move is a significant escalation, especially in its scattershot approach.

Here’s why: The Chinese sanctions go after U.S. allies, especially in the EU, more so than U.S. figures themselves. One target is the Germany-based Mercator Institute for China Studies, the largest China-focused think tank in Europe. China is presumably attempting to pull countries away from what it sees as a U.S.-led bloc against Beijing and to dissuade the EU from further sanctions, which it hasn’t deployed against China since 1989.

Already, Beijing’s move has derailed the controversial Comprehensive Agreement on Investment between the EU and China, and caused 281 German lawmakers to sign a fiery statement.

Explicitly using sanctions against researchers is a new step for Beijing. China has previously targeted academics, such as the so-called Xinjiang 13, with visa bans, and concerns over research being limited or visas being cancelled have affected Western scholarship. Universities have often failed to offer support to targeted scholars, in part because administrators expect China’s specialists to help attract Chinese students or operate joint campuses. Washington’s increasing attention on Beijing may now put more domestic political pressure on universities.

China’s aggressive pushback over criticism of its abuses in Xinjiang has also produced a sudden focus on historical U.S. and European atrocities, in a revival of Soviet-style whataboutism. On Tuesday, government spokesperson Hua Chunying brought up a medley of accusations to deflect from the Chinese state’s atrocities. One graphic from state outlet the Global Times blamed the EU, in a single page, for the Holocaust, Finnish parliamentary racism, and the gender pay gap in Luxembourg.

Finally, China is attempting to coerce businesses into abandoning boycotts of Xinjiang cotton. A coordinated online campaign is being directed against H&M, which stopped sourcing from Xinjiang last year. It’s not clear why the Swedish firm is the initial target as many retailers have made similar statements, but it could be linked to Beijing’s general animus toward Sweden. The campaign is likely to broaden. Foreign firms in China are already getting calls from local officials to clarify their positions on Xinjiang, seeking reassurance they won’t take action.

Alaska aftermath. As predicted, the meetings between U.S. and Chinese officials in Alaska yielded an ugly and public exchange of grievances. On the Chinese side, the vitriol was likely driven by concerns about political positions back home; officials sought the good press of standing up for Beijing. Top diplomat Yang Jiechi, who issued a particularly fervent denunciation of the United States, is an experienced, foreign-educated diplomat who has cozied up to U.S. officials as often as he’s finger-wagged at them.

Behind closed doors, the mood was reportedly at least businesslike, with attempts to establish clear lines of communication between the Biden team and the Chinese government and a relatively positive final readout from Xinhua News Agency.

Other Chinese Communist Party officials, meanwhile, were stuck with the less glamorous task of meetings with the Communist Party of the United States (CPUSA). CPUSA, which has fewer than 10,000 members, puts a reasonable amount of effort into maintaining ties with communist parties worldwide, although they are unsurprisingly more interested in those that hold actual political power. Given the lack of deep knowledge of the West among senior CCP officials, I wouldn’t be surprised if the CPUSA and other groups have successfully exaggerated their own influence in Beijing.

Mysterious explosion. Coverage of an explosion that killed at least five people in the village of Minjiang, now effectively a suburb of Guangzhou, has disappeared from the Chinese internet. Local authorities initially reported a “criminal incident.” Such censorship is normal in China, where disasters or attacks that would be front-page news in other countries are dropped into the memory hole by authorities.

Bombings are particularly sensitive in China because the official line is the crackdown in Xinjiang has ended terrorism. It’s worth noting that Chinese officials now say Xinjiang was a hotbed of terror and militancy from 2009 until 2017; although at the time, news reports often censored attacks in the region.

Post-Atlanta debate. The killing of eight people, including six Asian women, in Atlanta, Georgia, has sparked distress and reflection in the United States. For Asian American government and security professionals, the attack has stirred existing concerns about discrimination. The U.S. security clearance process regularly excludes Chinese Americans and State Department assignment restrictions that prevent some Asian Americans from working on countries where they have family ties. 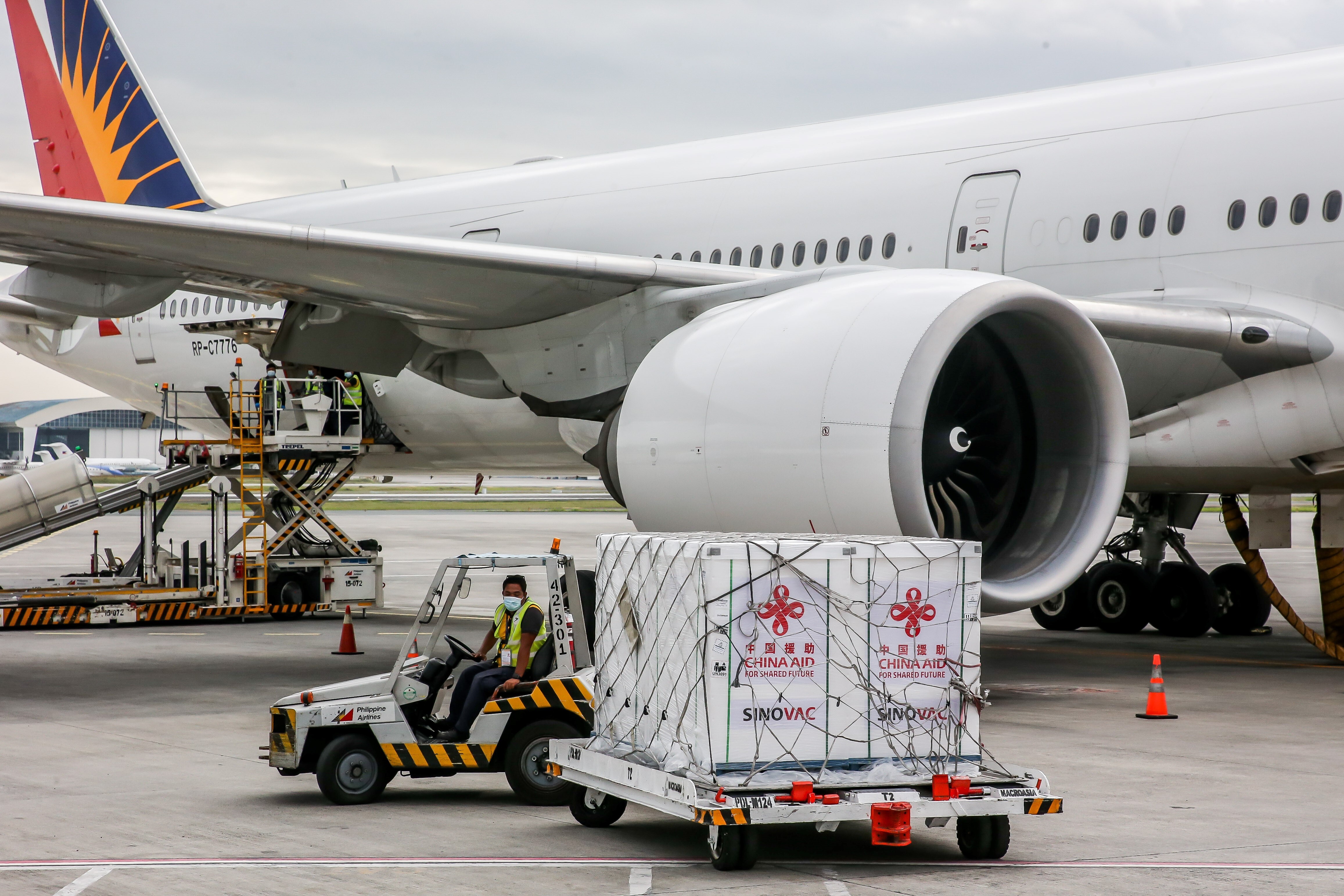 Staff members transport the second batch of the Sinovac vaccine donated by China at the Ninoy Aquino International Airport in Manila on March 24.Xinhua/ROUELLE UMALI via Getty Images

Vaccine woes. China has failed to release the data for its primary COVID-19 vaccine, raising serious concerns about its efficacy, especially since early tests showed poor results. Because of China’s early success against the coronavirus, testing was largely undertaken in other countries, mostly with younger volunteers. The vaccine isn’t being given out to those over 59 years old, reportedly due to their lack of inclusion in testing groups.

The lack of data presents an obstacle for China’s vaccine diplomacy. Countries with few alternatives, such as Pakistan, or those with a raging crisis, such as Brazil, have little choice but to get shots as quickly as possible. (The Brazilian elite are seeking out better alternatives.) But richer countries with more choices, such as Singapore, are electing not to use Chinese doses for now, waiting until Western vaccines arrive.

Data restrictions. Chinese regulators have issued tough new policies on the personal data that private firms can demand from users, a long-term public concern. But for now, while the authorities are demanding private firms comply with new limits, there is no enforcement mechanism. The move is likely one of the authorities’ attempts this year to break up bigger platforms and create a more competitive environment online.

Almost all Chinese applications currently demand real-name identification through a national identification number, part of the government’s own campaign to deanonymize and control the online sphere—making data leaks all the more damaging for users. The government wants the data it needs, such as who is making political posts or taking taxis to meet dissidents, but not the data on consumer habits that companies love to sell to one another.

Shopping champion. In another blow to beleaguered Alibaba, the relatively new e-commerce site Pinduoduo has overtaken long-term giant JD.com to become the top online shopping platform in China. It’s a sign of just how separate the Chinese internet is from the rest of the world that neither JD.com nor Pinduoduo have significant recognition outside the country. But Pinduoduo’s successful gamification of online shopping, along with its short-streaming content, is a model that Western firms are likely to try to borrow from.

As with many unicorn start-ups, Pinduoduo is fundamentally underpinned by venture capital right now. The firm lost $1.1 billion last year and has burnt through $13 billion paying vendors to offer cheaper goods. Unless it can switch gears, it may burn out as so many other major Chinese online ventures, from coupon discounts to bike sharing, have.

This beautifully done interview series from the streets of Beijing highlights working-class stories and shows a side of Chinese life often forgotten amid glitzy skyscrapers and technology apps. Kuang interviews homeless people, street vendors, booksellers, and retirees, painting a picture of a lively but tough city. “The cause of most of the suffering I’ve had in my life was that I’m a woman,” one storekeeper reflected, discussing miscarriages and domestic violence.

A recurring theme is mutual aid among the poor. “That woman selling boxed lunches is seriously disabled. … Every day, I help her carry stuff. As a way to thank me, she often cooks tofu with rice noodles for me. Knowing I have bad teeth, she cooks the food longer than usual to make it easier to chew,” a railway vendor said. “See? This world still has more good people than it does bad.”

NEW FOR SUBSCRIBERS: Want to read more on this topic or region? Click + to receive email alerts when new stories are published on Foreign & Public Diplomacy, China

As the U.S. and Russia Talk Ukraine, Where’s Europe?

As the U.S. and Russia Talk Ukraine, Where’s Europe?