Why Is U.S. National Security Run by a Bunch of Benchwarmers?

Biden has named nominees for only 16 of over 300 top posts.

Welcome to Foreign Policy’s Security Brief, and happy International Procrastination Day. Feel free to laze around today, but when you get back to the grind tomorrow, remember the wise words of the great Leslie Knope from Parks and Recreation: “There’s nothing we can’t do if we work hard, never sleep, and shirk all other responsibilities in our lives.”

The highlights this week: The perennial problem of vacant posts across the U.S. government’s national security agencies, lawmakers weigh in on Afghanistan withdrawal plans, and North Korea reminds Washington it’s still in the game.

Welcome to Foreign Policy’s Security Brief, and happy International Procrastination Day. Feel free to laze around today, but when you get back to the grind tomorrow, remember the wise words of the great Leslie Knope from Parks and Recreation: “There’s nothing we can’t do if we work hard, never sleep, and shirk all other responsibilities in our lives.”

The highlights this week: The perennial problem of vacant posts across the U.S. government’s national security agencies, lawmakers weigh in on Afghanistan withdrawal plans, and North Korea reminds Washington it’s still in the game.

After two months in office, U.S. President Joe Biden has yet to name nominees for hundreds of senior national security positions across the federal government. Some American officials have begun ringing alarm bells about how all those empty posts—filled in acting capacities by lower-level, career government officials—will affect national security decision-making, according to new reporting in the Wall Street Journal.

Biden has nominated just 16 people for over 300 vacant spots across the State Department, Defense Department, intelligence community, and other federal agencies dealing with national security, according to the Journal and data from the nonprofit Partnership for Public Service.

Not just a Biden problem. The big news here is that it’s not really news: Every four or eight years, hundreds of senior government leaders leave with the outgoing president. Then Washington hits the reset button, and federal agencies wait months, or even years, for a new cadre of political appointees to finally get into their jobs after stringent security background checks and the increasingly gridlocked Senate confirmation process.

Slow and steady loses the race. Everyone in Washington is used to it, but it’s a system no other major developed country has, and one that hampers effective decision-making on top national security issues behind the scenes, sometimes in diffuse ways. The seat-warmer officials filling those posts in an acting capacity may be skilled and experienced public servants, but they don’t have the clout or backing from the new White House to take charge.

“It’s not that there isn’t anyone in place, it’s that the people who are in place aren’t empowered to make decisions. Less a vacancy, and more an absence of clear guidance and leadership,” said one veteran U.S. diplomat.

There are U.S. ambassador posts that have been empty for years, and others that diplomats fully expect to sit empty for the first six months of the Biden administration or longer. It’s a system the United States could afford during the post-Cold War era, when it was the world’s lone superpower. But now that Washington is scrambling to compete with Beijing on the world stage, the U.S. government is effectively “shooting itself in the foot” with backlogs in Washington, another senior U.S. diplomat said.

Blame Trump? In this sense, the vacancy problems facing the Biden administration are ones all past administrations have faced. Biden officials told Foreign Policy there are some other new hurdles they’re trying to work through: new and more stringent security clearance requirements for potential nominees, and former President Donald Trump’s refusal to accept the 2020 election results, which caused delays in when Biden could name and vet nominees to send to Congress from the outset.

But that excuse can only hold out for so long, and U.S. lawmakers are starting to get impatient.

Close Kahl. Biden’s pick for the third-ranking position in the Pentagon is still in the running for the job after a nail-biter of a vote in the Senate. By a 13-to-13 vote in the Senate Armed Services Committee on Wednesday, Colin Kahl’s nomination to be the undersecretary of defense for policy was advanced to the full Senate, with Sen. Joe Manchin of West Virginia—a key Democratic swing vote—backing Biden’s pick, and Republicans united against Kahl.

A onetime national security advisor to Biden during the Obama administration, Kahl is likely to face a similarly tight vote in the full Senate, with Maine Republican Sen. Susan Collins—sometimes a bellwether for moderates on the right—already saying she will oppose the pick on the floor.

Around the horn. The Biden administration is expected to tap Jeffrey Feltman, a onetime top advisor to the United Nations secretary-general, to a new position as special envoy for the Horn of Africa, Robbie and Colum Lynch reported earlier this week. The expected move comes after Biden dispatched Chris Coons, a Delaware senator and close ally, to Ethiopia over the weekend to relay the administration’s concerns about the crisis in Tigray, as Robbie first reported.

Border pains. Immigration has become a major flash point for the Biden administration, with the president tapping Vice President Kamala Harris to oversee the influx of migrants at the U.S.-Mexico border and address root causes in the so-called Northern Triangle countries of Guatemala, El Salvador, and Honduras. The State Department also announced a new special envoy for the Northern Triangle this week: senior career diplomat Ricardo Zúñiga, who was most recently U.S. consul general in São Paulo, Brazil.

Power play. Samantha Power, Biden’s nominee to lead the U.S. Agency for International Development, faced her confirmation hearing before the Senate Foreign Relations Committee on Tuesday. The committee hasn’t yet scheduled a vote on her nomination.

Friday, March 26: The sixth anniversary of Saudi Arabia’s first airstrikes in the destructive war in Yemen, which has spawned the world’s worst humanitarian crisis.

Too soon. The May deadline for the United States to leave Afghanistan is approaching too quickly for the Biden team, House Armed Services Committee Chairman Adam Smith said at a Foreign Policy event on Wednesday, a view that the top lawmaker said is widely shared. But Smith said his argument was mainly logistical, due to the thousands of pieces of equipment and more than 2,500 troops (a number the New York Times reports could be even higher) that would still need to quickly exit the war-torn country. 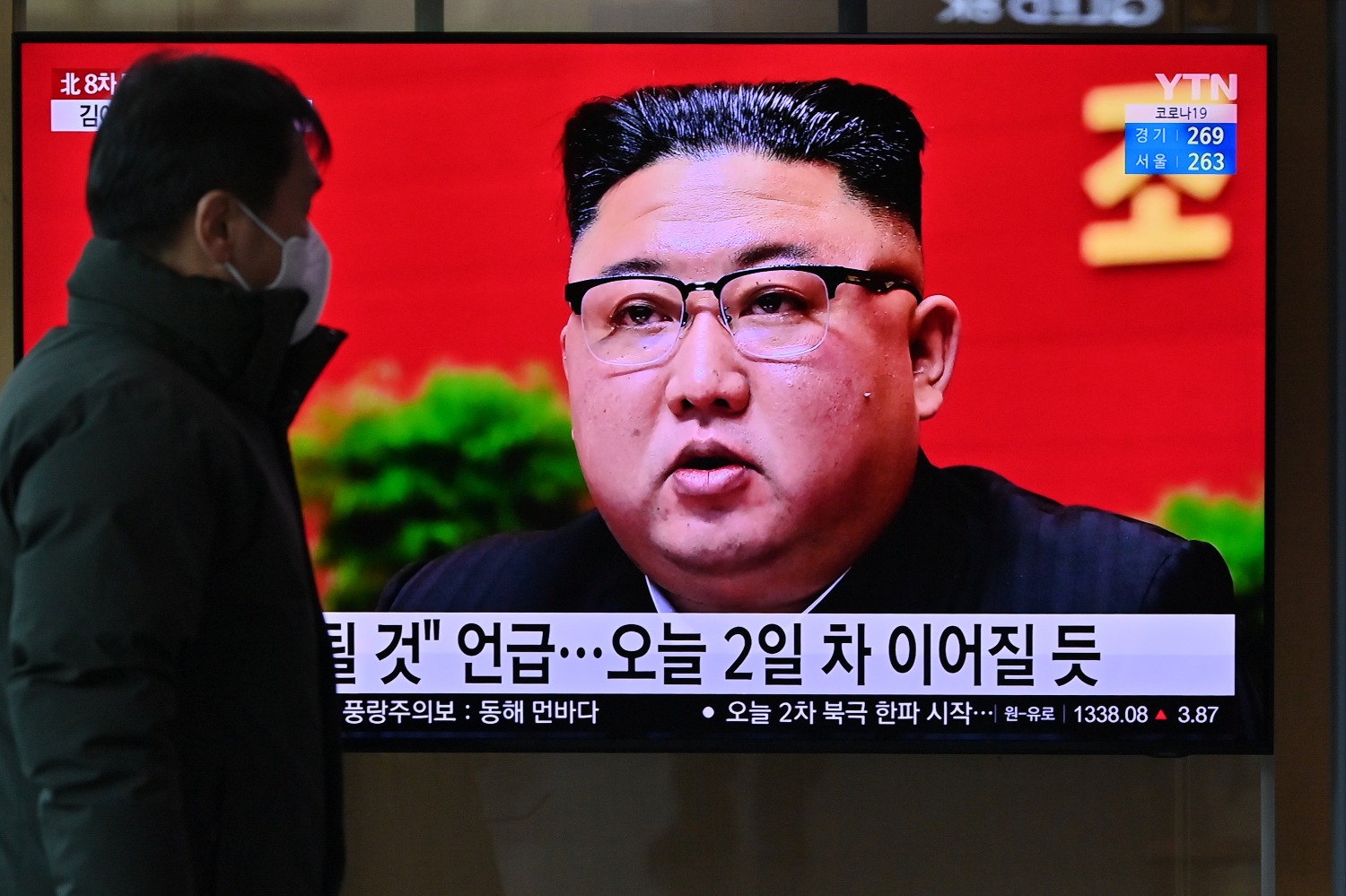 Making a stink. Top North Korean officials warned Secretary of State Antony Blinken and Defense Secretary Lloyd Austin against “making a stink” on their first visit to Seoul last week, sparking reports of renewed missile tests for the first time in nearly a year. Now, North Korea has made good on those threats twice in the past week, secretly testing two short-range missiles over the weekend and then firing another salvo of two cruise missiles this morning toward the Sea of Japan, South Korea’s Joint Chiefs of Staff reported.

“This activity highlights the threat that North Korea’s illicit weapons program poses to its neighbors and the international community,” Capt. Mike Kafka, U.S. Indo-Pacific Command’s spokesman, said in a statement.

Get out. U.S. Cyber Command was active in trying to stop intruders from causing havoc during the 2020 elections, Gen. Paul Nakasone told the Senate Armed Services Committee on Thursday. While it’s not immediately clear what Cyber Command did (Nakasone will probably leave that for the classified briefing with lawmakers), he went as far as to say that the efforts were aimed at getting ahead of “foreign threats before they interfered with or influenced our elections in 2020.”

Nakasone, who is the dual-hatted head of Cyber Command and the National Security Agency, said he’s also helping to plot the Biden administration’s course of action on the SolarWinds hack.

Speaking of March Madness. If you’ve tracked North Korea over the years, you might know that basketball is Kim Jong Un’s favorite sport, and the country’s leader has a friendship with eccentric former Chicago Bulls star Dennis Rodman. Kim likes basketball so much, in fact, that in 2014, he convinced Rodman to bring a team of former NBA stars to play the North Korean team in an exhibition in Pyongyang to mark his 30th birthday.

Can you name at least three of the Americans who went along? We’ll give you a shout-out in next week’s Security Brief.

Heritage. Kay Coles James, the president of the influential conservative Heritage Foundation think tank, announced this week she is resigning. James will remain on the board of the organization, which recently added former Vice President Mike Pence. No word yet on a successor.

“We both have a little more gray hair.”

—Maj. Ernie Carlson, operations officer for 2-104th General Support Aviation Battalion, on what’s changed in the 15 years since he and his former co-pilot first deployed to the Middle East

The Defense Department highlighted their reunion in a recent press release. As Task & Purpose points out, these type of feel-good stories are “low-key depressing” reminders of how long U.S. wars in the Middle East have dragged on.

Shedding old habits. India might finally be making moves to reinvent its long-standing policy of “nonalignment.” The latest “Quad” summit between India, the United States, Japan, and Australia shows that India is no longer reluctant to work with the West, as C. Raja Mohan writes for Foreign Policy.

Meme wars. It probably takes the average teenager 30 seconds to come up with a meme that could go viral. So what about the Pentagon, with its $700 billion budget? From Vice News: “Read the Pentagon’s 20-Page Report on Its Own Meme.”

U.S. Cyber Command posted a Halloween meme to Twitter depicting a Russian bear dropping candies labeled with malware strains out of a jack-o’-lantern bucket. At the time of this writing, it has 300 retweets. And how long did Defense Department officials spend creating it and running it through the department’s arduous approvals process? Twenty-two days.