A new law all but guarantees that the city’s legislature will be stacked with supporters of Beijing.

The highlights this week: A new law reduces the number of directly elected representatives in Hong Kong’s legislature, Beijing’s propaganda network doubles down on its efforts to silence criticism of atrocities in Xinjiang, and Chinese provocations near Taiwan keep growing.

The highlights this week: A new law reduces the number of directly elected representatives in Hong Kong’s legislature, Beijing’s propaganda network doubles down on its efforts to silence criticism of atrocities in Xinjiang, and Chinese provocations near Taiwan keep growing.

On Tuesday, China’s government endorsed changes to Hong Kong’s legislature that will reduce the proportion of directly elected representatives from 35 of 70 seats to just 20 of 90 seats. The decision isn’t surprising, but it is another blow to the last remaining democratic elements in Hong Kong’s government and to a city that once dreamed of political freedom.

Under the new law, pro-Beijing businesses and professional groups will still choose 30 seats—the so-called functional constituencies—while a government-appointed election committee will choose 40 seats. On top of that, the same election committee will screen all candidates, making even the 20 directly elected seats likely to be packed with “patriotic” officials, as the government calls backers of Beijing’s harsh policies in Hong Kong.

Hong Kong’s current Legislative Council has rubber-stamped the changes. The body lost its effective opposition last November when pro-democracy members resigned en masse in protest of the expulsion of some of their colleagues under the new national security law. Even holding primaries for pro-democracy parties is now considered a violation of the law.

Hastily established before the last British administration left Hong Kong in 1997, the city’s democracy was always imperfect, but Hong Kongers valued it nevertheless. Fierce election campaigns often produced striking rebukes to Beijing, such as the 2019 local elections that the opposition swept. The shock caused by that loss and by the city’s youth-led protest movement was so strong that Beijing appears determined never to suffer such embarrassment again.

Hong Kongers’ despondency and mistrust of their government now appear high, although crackdowns on independent polling make it hard to determine just how the public feels.

One consequence of the loss of confidence in government: Hong Kongers express among the highest levels of vaccine skepticism in the world, with just 39 percent saying they would be willing to take a shot from the government. That reflects a perception that China is forcing the Sinovac and Sinopharm vaccines on Hong Kongers, a feeling that increased after distribution of the Pfizer-BioNTech vaccine in Hong Kong was halted over supposed safety issues.

Xinjiang denialism. China’s propaganda network has spent this week on an aggressive full-court press against criticism of state atrocities in Xinjiang after the sanctions issued against European politicians, think tanks, and academics last week. So-called “wolf warrior” rhetoric has reached a new high, with Chinese diplomats throwing around insults in a bid for attention at home, such as the consul in Brazil who called Canadian Prime Minister Justin Trudeau a “spendthrift.”

Harassment of foreign media has also increased, leading to the departure of two more journalists from China: the BBC’s John Sudworth and the Irish RTE’s Yvonne Murray, a married couple, who moved to Taiwan after threats from the authorities. The tone of state media articles targeting journalists is now vicious—even by Chinese government standards. Vicky Xu, a Chinese Australian analyst who has produced work on Xinjiang for the Australian Strategic Policy Institute, a think tank, has been a particular focus of misogynistic vitriol.

One problem facing China is that it lacks any credible global intellectual support for its atrocity denialism, unlike the Soviet Union’s Western apologists. That has led to Beijing’s promotion of fringe figures: For example, Ministry of Foreign Affairs spokesperson Hua Chunying this week declared the Schiller Institute—the German branch of the LaRouchite conspiracy movement— “true scholars.”

Taiwan under threat. Twenty Chinese planes intruded into Taiwan’s air defense identification zone last Friday, the largest incursion yet. The maneuver signals growing provocation around Taiwan ahead of the 100th anniversary of the founding of the Chinese Communist Party on July 23. The intrusions have become so common that Taiwanese airplanes have stopped scrambling in response. The United States has responded by loosening restrictions to make it easier for U.S. officials to meet with their Taiwanese counterparts.

While there are serious concerns about who would prevail in a hypothetical invasion, it’s important to remember that any Chinese attack on Taiwan would likely be telegraphed well in advance. The size of forces needed, and the Taiwanese-Chinese intelligence penetration of each other’s militaries, means strategic surprise is probably out of the question.

WHO pushes back. After a year of criticism for the World Health Organization’s acquiescence to China throughout the coronavirus pandemic, WHO Director-General Tedros Adhanom Ghebreyesus rebuked Beijing on Tuesday for failing to allow proper access or data as part of WHO’s investigation into the origins of the virus. This week, WHO issued a report restating the likelihood of zoonotic transfer rather than a laboratory leak.

Tedros’s comments effectively undermine the report, following statements from investigation team leader Peter Ben Embarek that they had been under political pressure while in China. Robert Redfield, the former head of the U.S. Centers for Disease Control and Prevention under the Trump administration, has voiced support for the lab leak theory, but the supposed intelligence confirming it has yet to materialize.

Ethnic surveillance. Video firms such as Dahua and Hikvision are playing a direct role in creating the standards for police cameras that track individuals by ethnicity, with information on skin and hair color programmed into the systems as well as a special category that singles out Uyghurs and Tibetans, reporting by IPVM and Reuters has found. China’s military has also put special emphasis on artificial intelligence facial recognition, with more funding dedicated to it than any other projects.

Although there is clearly intense pressure to monitor China’s own ethnic minorities, as well as foreigners, there’s also the possibility of selling this technology to governments worldwide that see minorities as security threats or already use Chinese-made surveillance systems.

Paper mills threaten science. Nature magazine has tracked more than 370 papers retracted from academic publications since January 2020—all of them from authors at Chinese hospitals. This is a recurring problem. The demand to publish or perish is acute in China, and academic standards are low. A raft of Chinese companies specialize in placing papers, often using fake data or poor experimental methods, in Western journals.

The Chinese government and university authorities have tried repeated crackdowns against the paper mills, but they also defended government-favored pseudosciences such as traditional Chinese medicine.

Tech stocks plunge. After regulators signaled tightening and with fallout from Archegos Capital Management’s $20 billion moves hitting global markets, Chinese technology stocks had one of their worst-ever months. The price drops still only knocked them back to where they were at the start of 2021, but with the government potentially planning a cull of powerful tech firms and U.S. authorities revving up to impose more limits, it might be best not to heed suggestions to buy at the bottom. 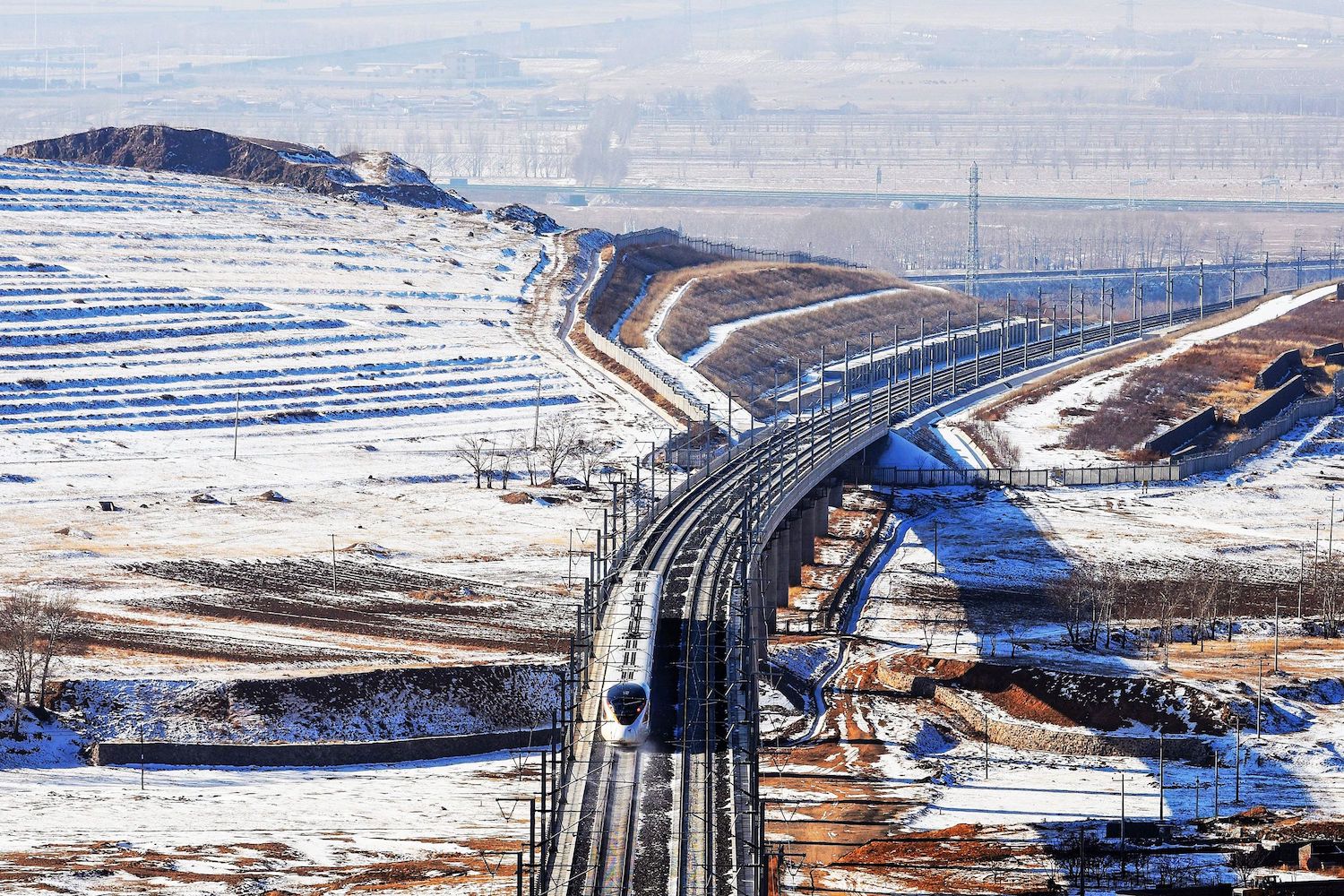 A bullet train undergoes a test run between Beijing and Hohhot in China’s northern Inner Mongolia region on Dec. 9, 2019.STR/AFP via Getty Images

The history of the city of Hohhot is evident in its name: It’s short and crunchy in Mongolian and clumsy and long in Chinese, in which it’s rendered Huhehaote. From its founding in 1557, beyond Chinese borders, it was a trading town between Mongolians and Chinese. Han merchants were encouraged to settle there by both the local Mongolian khan and the Ming Empire.

The Mongolian name means “blue town,” reflecting a sacred color in a sky-dominated steppe. Like the rest of Inner Mongolia, Hohhot saw deepened conflicts between Han settlers and Mongolian natives from the mid-19th century onward, as attempts by the Qing government to restrict settlement collapsed. The original Mongolian population is outnumbered 6 to 1 by Han Chinese, making the city less susceptible to the wave of ethnic repression sweeping Inner Mongolia—but not immune.

Today, Hohhot is the capital of the Inner Mongolia autonomous region and an industrial city, its population swollen by post-World War II settlement. It’s also an ecological disaster. The city has grown far beyond what local water sources can support, and the taps constantly run dry since rainfall can be as little as 2 inches per year. Urban managers have long struggled to keep the city alive, using wastewater recycling and household water limits.

NEW FOR SUBSCRIBERS: Want to read more on this topic or region? Click + to receive email alerts when new stories are published on Politics, China, Hong Kong