India Faces Tests From Its Neighbors

Despite a border cease-fire with Pakistan, India faces a growing set of challenges in its backyard.

Welcome to Foreign Policy’s South Asia Brief. The highlights this week: India’s neighborhood challenges could undermine its influence, COVID-19 cases continue to rise in India and Pakistan, and Washington excludes Islamabad from a global climate summit.

Welcome to Foreign Policy’s South Asia Brief. The highlights this week: India’s neighborhood challenges could undermine its influence, COVID-19 cases continue to rise in India and Pakistan, and Washington excludes Islamabad from a global climate summit.

For India, Pakistan has long posed the greatest challenge among its neighbors and with good reason: The two are bitter rivals and have fought multiple wars. But India now grapples with headaches across its neighborhood, from Myanmar to Nepal. Ironically, the recent border cease-fire with Pakistan means that New Delhi’s relations with Islamabad may not be its chief regional concern, at least for now.

India faces an immediate diplomatic dilemma in Myanmar, where the military junta has cracked down with deadly force against civilians protesting against the Feb. 1 coup. New Delhi has cooperated closely with Myanmar’s military in recent years on economic integration and on counterinsurgency along the border. In the long term, India’s engagement with the armed forces aims to build influence in Myanmar and crowd out China, its geopolitical rival.

If India condemns the Myanmar military’s actions, it could jeopardize these key interests. But by remaining quiet, it risks a major reputational blow. So far, New Delhi has largely chosen silence. The government declined to sign on to a March statement with other democracies against the violence, and its defense attaché in Naypyidaw attended an Armed Forces Day parade the same day. Officials in the border state of Manipur enforced an order to turn away refugees fleeing the violence in Myanmar before it was revoked a few days later.

New Delhi’s best bet is to leverage its ties with the Myanmar military and use quiet diplomacy to press it to reduce its violence—an outcome that public condemnations from the United States and others have so far failed to achieve.

In Afghanistan, events are moving in a troubling direction for India as the United States tries to reinvigorate the floundering peace process. If successful, it would result in a political settlement that gives a share of power to the Taliban—and by extension its patron, Pakistan. And if it fails, the war in Afghanistan would intensify, also strengthening the Taliban. New Delhi is currently a close partner of Kabul. The impending U.S. withdrawal will further destabilize Afghanistan, hampering India’s ability to project influence there through diplomacy and development assistance.

Elsewhere, a border crisis with Nepal last year has injected tension into a relationship once flush with goodwill. Pro-China political leadership in Sri Lanka is working to scale up its relations with Beijing: The countries’ presidents had a phone conversation this week, underscoring their desire to strengthen cooperation. And India’s relations with China are on ice following a deadly border clash last summer. (New Delhi’s decision to sign the border truce with Pakistan was likely motivated, in part, by a desire to free up more bandwidth to focus on the threat from China.)

None of this suggests that India’s relationships with its neighbors are a dumpster fire. There is no serious crisis with any major regional player except for China. Despite tensions, commercial ties with many neighbors remain sound. India is still Nepal’s top trade partner, and it is negotiating a new trade deal with Bangladesh. New Delhi’s vaccine diplomacy campaign has garnered effusive praise from recipient governments.

But the neighborhood troubles are nothing to sneeze at. They threaten to undermine the “neighborhood first” policy, one of Modi’s signature foreign-policy initiatives. The tensions have given Chinese and Pakistani rivals opportunities to increase their influence and diplomacy in India’s backyard. And by bogging it down, the nearby challenges distract New Delhi from its long-standing quest to play a greater role on the world stage.

COVID-19 surges in India and Pakistan. The large spikes in new coronavirus cases highlighted in last week’s edition continue. And these surges are bigger than those seen in most other parts of South Asia.

On March 29, India reported nearly 70,000 new cases, the highest figure since October and a major jump from the previous week. New cases are rising at a higher rate than they were during India’s pandemic peak last summer, though the numbers declined on Tuesday and Wednesday.

In Pakistan, the prime minister’s special advisor on health has warned that the current wave could be worse than Pakistan’s darkest period last summer. This week, the country reported its highest number of new cases since June. Prime Minister Imran Khan, who tested positive on March 20, has recovered, but the president and defense minister now have the virus.

Officials in Pakistan and India continue to blame the surge on poor compliance with health protocols and the presence of the particularly contagious U.K. variant. A Pakistani contact shared another possible explanation: It’s the height of flu season, and many people with COVID-19 may believe they have the flu and aren’t taking proper precautions.

Nearly two years into his second term, Modi remains popular, and recent signs of economic recovery should further strengthen his Bharatiya Janata Party (BJP). The farmers protesting against new agricultural laws have presented one of Modi’s biggest political challenges, but most of them hail from Haryana and Punjab states, neither of which hold elections this year. (In his latest column, FP’s Salvatore Babones argues that those new laws haven’t angered as many farmers as some commentators might suggest, though many other analysts think otherwise.)

The BJP’s toughest test could be in West Bengal, home to Chief Minister Mamata Banerjee—a powerful rival to Modi. On March 31, Banerjee published an extraordinary letter directed at 15 other opposition figures that called for a “united and effective struggle against the BJP’s attacks on democracy and the Constitution.” She warned that the BJP intends to establish “one-party authoritarian rule.”

The growing gender gap. The World Economic Forum has released its 2021 Global Gender Gap Report, which measures women’s status in politics, economics, health, and education. The rankings present a dismal picture of South Asia. The report classifies it as the second-worst performing region in the world, estimating that it will take 195 years to close its gender gap.

Afghanistan, which wasn’t featured in the 2020 rankings, is dead last at 156, and Pakistan is not far away at 153. As bad as the situation is for Afghan women today, it could get even worse if the Taliban gain power through force or through a political settlement following the departure of foreign troops. As Lynne O’Donnell reports, the peace process doesn’t bode well for the progress of women’s rights in the country. 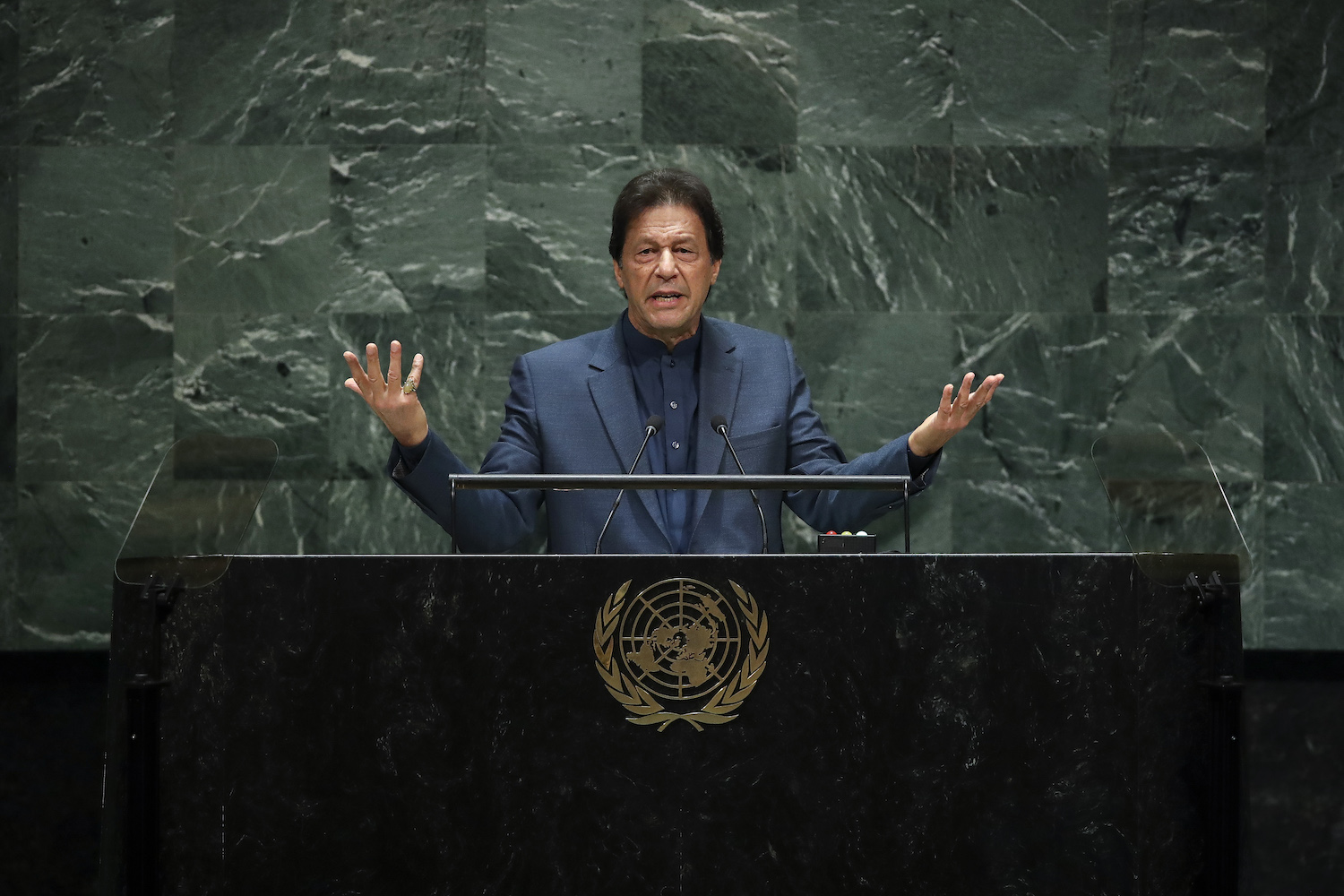 On March 26, the White House released the names of 40 world leaders invited to participate in a virtual global climate summit later this month. The announcement generated little fanfare, but it sparked a firestorm of commentary in Pakistan because Prime Minister Khan didn’t receive an invite. Such anger is warranted: Pakistan is ranked as one of the 10 most climate-vulnerable countries in the world.

Many Pakistani commentators perceive Khan’s omission as a deliberate snub—whether to signal Pakistan’s lack of global importance, to compel it to cooperate more with the United States, or to punish it for its deepening partnership with China. In reality, Khan’s exclusion is likely the result of the narrow prism that Washington applies to Pakistan, emphasizing security and Afghanistan, not climate change.

The incident highlights a disconnect that dogs U.S.-Pakistan relations: Islamabad wants Washington to apply a broader lens to the relationship, but U.S. goals are too narrow to do so.

“Media freedom is absolute. But with responsible, reasonable restrictions.”

Mifzal Ahmed, an economist in the Maldives, writes in the Edition about recent legislation that establishes a new government body to regulate waste. Poor waste management poses serious environmental risks to the Maldives, and Ahmed argues that the bill must succeed for the country to achieve its goal of becoming carbon neutral by 2030.

An editorial for Sri Lanka’s Daily FT assesses Colombo’s pandemic dilemma. The country this week received a shipment of China’s Sinopharm vaccine, even as a Sri Lankan medical expert board recommended against using the Chinese vaccines until there is more data on their efficacy.

Shuprova Tasneem, an editor with the Daily Star, discusses domestic abuse in Bangladesh, where more than 70 percent of married women have experienced intimate partner violence. “As long as the women in this country are being tortured and even killed by their partners, we cannot achieve the gender quality that every democratic nation should aspire to,” she writes.

NEW FOR SUBSCRIBERS: Want to read more on this topic or region? Click + to receive email alerts when new stories are published on Foreign & Public Diplomacy, India, South Asia