Is Moscow’s muscle-flexing a show of force or a renewal of the war?

Welcome to Foreign Policy’s Security Brief, and we hope everyone remembers it’s April Fools’ Day before reading alarming headlines like this one.

The highlights this week: Russia builds up military forces on its border with Ukraine, a dearth of Pentagon nominees from Biden rankles Congress, and what the U.S. military can learn from drone warfare in the Azerbaijan-Armenia conflict.

Welcome to Foreign Policy’s Security Brief, and we hope everyone remembers it’s April Fools’ Day before reading alarming headlines like this one.

The highlights this week: Russia builds up military forces on its border with Ukraine, a dearth of Pentagon nominees from Biden rankles Congress, and what the U.S. military can learn from drone warfare in the Azerbaijan-Armenia conflict.

A Not-So-Frozen Conflict Heats Up

After years of uneasy stalemate, Ukrainian and Western officials are raising alarm bells about a build-up of Russian forces near the border.

On Wednesday, U.S. Secretary of State Antony Blinken spoke with his Ukrainian counterpart about the situation, while Gen. Mark Milley, the chairman of the Joint Chiefs of Staff, called top military leaders in both Ukraine and Russia. An estimated 4,000 Russian troops have been dispatched to the border with the Ukraine, according to the New York Times, prompting the U.S. military’s Europe command to raise its watch level of the crisis to the highest possible level.

Does this spell (renewed) all-out war? It’s hard to say, and likely too soon to tell. Russia recently conducted a military exercise in the region and announced last week that it would permanently base an airborne regiment in Crimea, which experts say could account for some, but not all, of the recent troop movements.

“They are conducting a sizable deployment, and in a manner intended to be visible, but this so far does not appear to be the sort of force size one would expect for an invasion of Kherson Oblast [the Ukrainian region opposite Crimea] or a large-scale operation along those lines,” said Michael Kofman, a senior research scientist with CNA. “There is a host of other activity along Ukraine’s borders, which consequently raises questions about intentions,” he added.

That, combined with a flare-up in fighting in eastern Ukraine between the military and Russian-backed separatists, is stoking a lot of unease in Washington and European capitals. But Kofman cautioned against alarmism. “To me, it does not appear that Russia is positioning itself for an imminent invasion,” he said, adding that the build-up was more likely an effort to coerce Ukraine. Ukrainian President Volodymyr Zelensky called the actions “muscle-flexing” in a Russian attempt to raise pressure amid stalled peace talks.

Peace talks going nowhere fast. Efforts to resolve the conflict, which has killed 14,000 people since it broke out in 2014, have struggled to get off the ground. The Minsk agreement, negotiated in the Belarusian capital in 2015, brought the worst of the fighting to an end, but disagreements over its implementation have allowed the conflict to simmer. Over the past year, Moscow and its regional proxies have stepped up efforts to issue passports to residents in Russian-occupied eastern Ukraine, in a bid to increase their leverage over Kyiv.

Biden’s in a bind. Former U.S. President Donald Trump’s efforts to use Ukraine to gin up dirt on his political opponent Joe Biden made Kyiv, through no fault of its own, a political hot potato in Washington. Since he took office as president, Biden has kept his distance and has yet to have a phone call with his Ukrainian counterpart.

Some are calling on the Biden administration to push back harder on Russia. “The key point is that this isn’t out of nowhere. Over the last month, you’ve seen a real escalation in violence in the Donbass, and you haven’t seen a lot from the administration out of that,” a former senior Trump administration official told Security Brief. “[Putin] pushes until he hits something hard, and he hasn’t hit anything hard yet.”

Still, NATO should brace for the worst. NATO doesn’t have a direct role to play in Ukraine’s conflict beyond providing political support to Kyiv (while allied countries provide training, equipment, and weapons). But it should be ready for crisis response, says Christopher Skaluba, a former Defense Department official now at the Atlantic Council.

How about that pivot to Asia? The specter of renewed fighting in Ukraine is an unwelcome, poorly timed reminder that Moscow might have something to say about Washington’s long-planned pivot to Asia, which has enough challenges. Washington is pulling forces from the Middle East to reinforce Asia, even as Europe is on edge. While most analysts agree that an all-out conflict between Russia and NATO members is very unlikely, the conflict in Ukraine is a reminder that “a quarrel in a faraway country” often ends poorly.

Nobody… at the Pentagon, at least. Over two months into his administration, Biden has named exactly three nominees for senior-level Defense Department posts: Defense Secretary Lloyd Austin; Kathleen Hicks as deputy; and Colin Kahl, the nominee for the Pentagon’s third-ranking post, who is awaiting confirmation after a bruising Senate battle.

Biden’s lack of nominees at the Pentagon—and elsewhere—is frustrating lawmakers as the weeks drag on. Even Democratic allies are raising alarm about the lack of picks. “We’ve got to start seeing them,” Sen. Tim Kaine told Politico.

Wednesday, April 7: The United States and Iraq will resume their strategic dialogue, which could determine the future of the U.S. troop presence there.

Drone lessons. The Army’s Asymmetric Warfare Group, which shuts its doors in May, has spent the last several months going to school on Azerbaijan’s victory over Armenia in the disputed Nagorno-Karabakh region. Here’s what it’s learned: Smaller nations are better equipped than ever to rule the skies with cheap airpower—like off-the-shelf drones and kamikaze munitions—and the United States had better learn to cover up.

“What’s clear in that conflict is that a less-funded nation can do combined arms warfare,” said Col. Scott Shaw, the outgoing head of the Asymmetric Warfare Group. “You don’t have to be the United States or Russia. The price point to entry into combined arms warfare is lower than initially thought.” 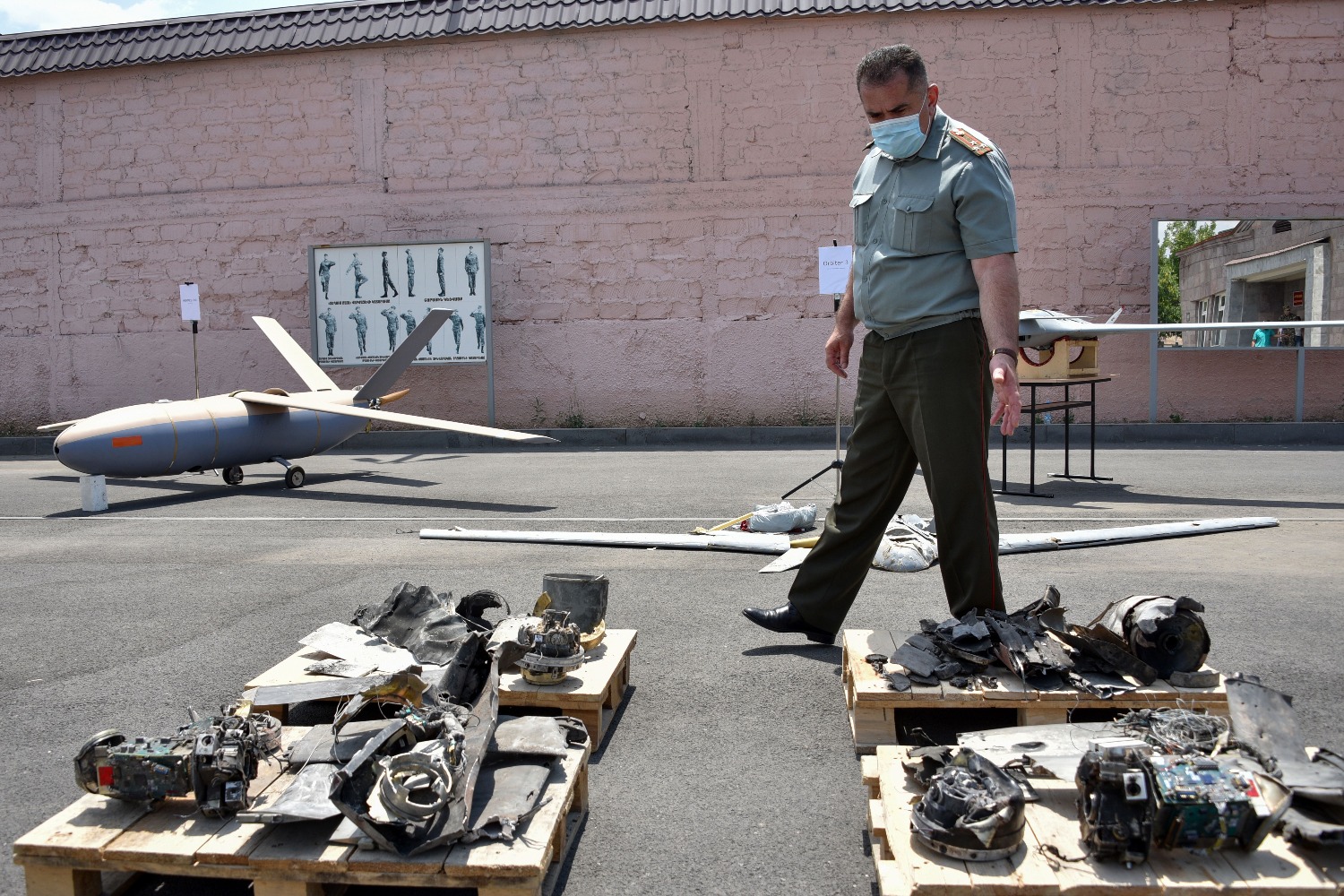 An official walks among objects that Armenia presented as captured and downed Azerbaijani drones during recent armed clashes on the Armenian-Azerbaijani border in Yerevan, Armenia, on July 21, 2020.Karen Minasyan/AFP via Getty Images

Unsanctioned. The Biden administration plans to revoke Trump-era sanctions on International Criminal Court officials as soon as this week or next, as Colum Lynch and Robbie exclusively reported, another sign of Biden returning to a traditional footing on human rights after four years under Trump. Some human rights experts say the move is long overdue, but they aren’t lavishing praise on Biden; they say it’s low-hanging fruit that the new administration took too long to act upon.

New Pentagon transgender policies. Speaking of reversing Trump policies, the Pentagon this week scrapped Trump-era directives that effectively banned transgender people from serving in the military, and it opened greater medical care for transgender troops. Four service chiefs testified before Congress in 2018 that allowing transgender troops to serve does not hurt units’ morale or readiness.

Brazilian shuffle. The chiefs of all three branches of Brazil’s military abruptly resigned amid a dramatic cabinet shake-up, as the crisis-stricken administration of right-wing President Jair Bolsonaro parries concerns he is looking to gain greater political control over the military.

Autocracy takes a road trip. Russia never lets a good crisis go to waste, and Myanmar is no exception. Russia’s deputy defense minister, Alexander Fomin, visited Myanmar to shore up support for the military junta amid its sweeping and deadly crackdowns on protesters who opposed the country’s military coup.

Think tank moves. Stacie Pettyjohn, who spent the last decade at the Rand Corp., including in roles leading Air Force research and war-gaming, will run the defense program at the Center for a New American Security. She replaces Susanna Blume, who joined the Biden administration to handle the job of Cost Assessment and Program Evaluation director at the Pentagon.

The German Marshall Fund is bringing on Bonnie Glaser to lead its Asia Program and Laura Thornton to lead its Alliance for Securing Democracy Initiative.

Justin Muzinich, a former deputy secretary of the Treasury under Trump, is joining the Council on Foreign Relations as a distinguished fellow.

“While Democrats and Republicans play checkers, China is building supercomputers that can play a fusion of mah-jongg and Monopoly called Mah-japoly.”

Back to the future. Since chatter about a “new cold war” with China is all the rage in D.C. these days, here’s David Adesnik writing in Foreign Policy on how Biden appears to be adopting a Harry S. Truman-like approach to foreign policy and reviving a Truman Doctrine for the 21st century.

China is Europe’s problem, too. A meaty new report by the Atlantic Council outlines a strategy for U.S.-European cooperation on confronting China globally. The upshot is that in any potential conflict between the United States and China, Europe will inevitably be dragged in—or at least caught in the political crossfire—so Europeans better start thinking about how they will work with Washington to adapt to this new era of “great-power competition.”

The last Suez crisis. If you’re anything like us, you were probably glued to your computer screen watching workers trying to get the container ship Ever Given unstuck from the Suez Canal. But the last time the waterway was blocked, after the 1967 Six-Day War, cargo ships were trapped there for eight whole years. To pass the time, they formed the so-called Great Bitter Lake Association between the stranded ships, pooling food and beer, and developing stamps, dinnerware, and even their own Olympic Games. Sounds like a nice break.

NEW FOR SUBSCRIBERS: Want to read more on this topic or region? Click + to receive email alerts when new stories are published on Security, United States, Russia