A spat at Mercosur’s 30th birthday marked a low point for regional cooperation.

The highlights this week: What Latin America’s COVID-19 fiasco says about the future of regional cooperation, deciphering the Brazilian military’s abrupt change in command, and narco-politics in Honduras.

The highlights this week: What Latin America’s COVID-19 fiasco says about the future of regional cooperation, deciphering the Brazilian military’s abrupt change in command, and narco-politics in Honduras.

When the presidents of Argentina, Brazil, Paraguay, and Uruguay virtually convened last Friday to celebrate the 30th birthday of South American customs union Mercosur, what should have been a moment of affirmation ended in a verbal spat between Argentina’s Alberto Fernández and Uruguay’s Luis Lacalle Pou over a long-running debate on easing some of the bloc’s rules. Unwillingness to evolve, in Lacalle Pou’s view, has held Mercosur back.

The open bickering was symptomatic of wider diplomatic paralysis in the region. From the mid-2000s to mid-2010s, South American countries often came together on topics from health to defense. But in the years since, the continent has politically fractured—culminating in dismally low coordination during the COVID-19 health emergency.

This is likely a factor behind the region’s staggering death toll. Latin America accounts for around a quarter of global COVID-19 deaths, despite being home to only 8 percent of the world’s population.

While blocs like the African Union, the European Union, and the Association of Southeast Asian Nations have coordinated on response protocols and negotiated vaccines for their member countries, Latin America is experiencing a “hollowing out” of regional political capacity, five scholars from the region recently wrote in Nueva Sociedad.

One loss that is particularly consequential is that of the health cooperation branch of the Union of South American Nations (UNASUR), created in 2008. The body had conducted disease surveillance and negotiated lower prices for mass purchases of HIV drugs. “Today, it would make all the difference if we could do that with vaccines,” public health expert Paulo Buss told O Globo.

UNASUR, which was founded when many Latin American countries had left-wing presidents, was extinct by 2019 thanks to divisions over how to deal with Venezuela’s political crisis and the election of several right-wing leaders. In March 2019, Chile and Colombia founded a replacement body, the Forum for the Progress and Development of South America (Prosur); eight countries are now members—but Prosur has done little in terms of COVID-19 response.

“Not having more effective mechanisms today was a collective failure,” a Brazilian diplomat said of Prosur during the pandemic.

Farther north, the Caribbean Community (CARICOM) has worked together much better in response to the crisis, including through joint advocacy for vaccine access.

But elsewhere in Latin America, there has been no large-scale, coordinated regional response other than countries’ individual cooperation with the World Health Organization and its mechanism for vaccine access, COVAX.

Ad hoc cooperation. Amid regionwide disarray, Latin America’s history of past partnerships has translated into some sporadic cooperation measures. In the scramble for vaccines, Argentina facilitated some countries’ access to documents needed to approve the Russian Sputnik V shot. Chile, among the world’s vaccination champions, has sent doses to Ecuador and Paraguay. And local elected officials and health researchers across the region have participated in information exchanges throughout the pandemic.

Another potential example of ad hoc Latin American cooperation on the pandemic could come if trials of Cuba’s vaccines go well. That country has discussed providing shots to Mexico, Venezuela, and other low- and middle-income countries.

New horizons for regionalism. The authors of the Nueva Sociedad piece called for improving regional coordination to “overcome isolation and irrelevance.” Latin American nations, they urged, should work together not only on pandemic response but also on facilitating political dialogue for a transition in Venezuela, supporting Colombia’s peace accord, and giving humanitarian attention to migrants in the region. A recent state visit between the ideologically opposed presidents of Argentina and Chile shows potential in this direction.

Chile’s former president Ricardo Lagos is among those in Latin America who have stressed that regrouping is also important so the region can exercise “multi-membership and independence” in global geopolitics rather than taking sides with either the United States or China.

The fate of regional trade. As for Mercosur’s malaise, although a trade deal with the European Union—which would be the bloc’s biggest leap forward in decades—is currently stagnant due to concerns over deforestation in the Amazon Rainforest, the bloc is not going to disintegrate any time soon.

And for its part, the Pacific Alliance, the trade bloc comprising of Chile, Colombia, Mexico, and Peru, continues to hum along. Many of Latin America’s political elites share an appreciation for the benefits of regional cooperation. What is more difficult is acting on it.

Sunday, April 11: Peru holds congressional elections and the first round of its presidential election. 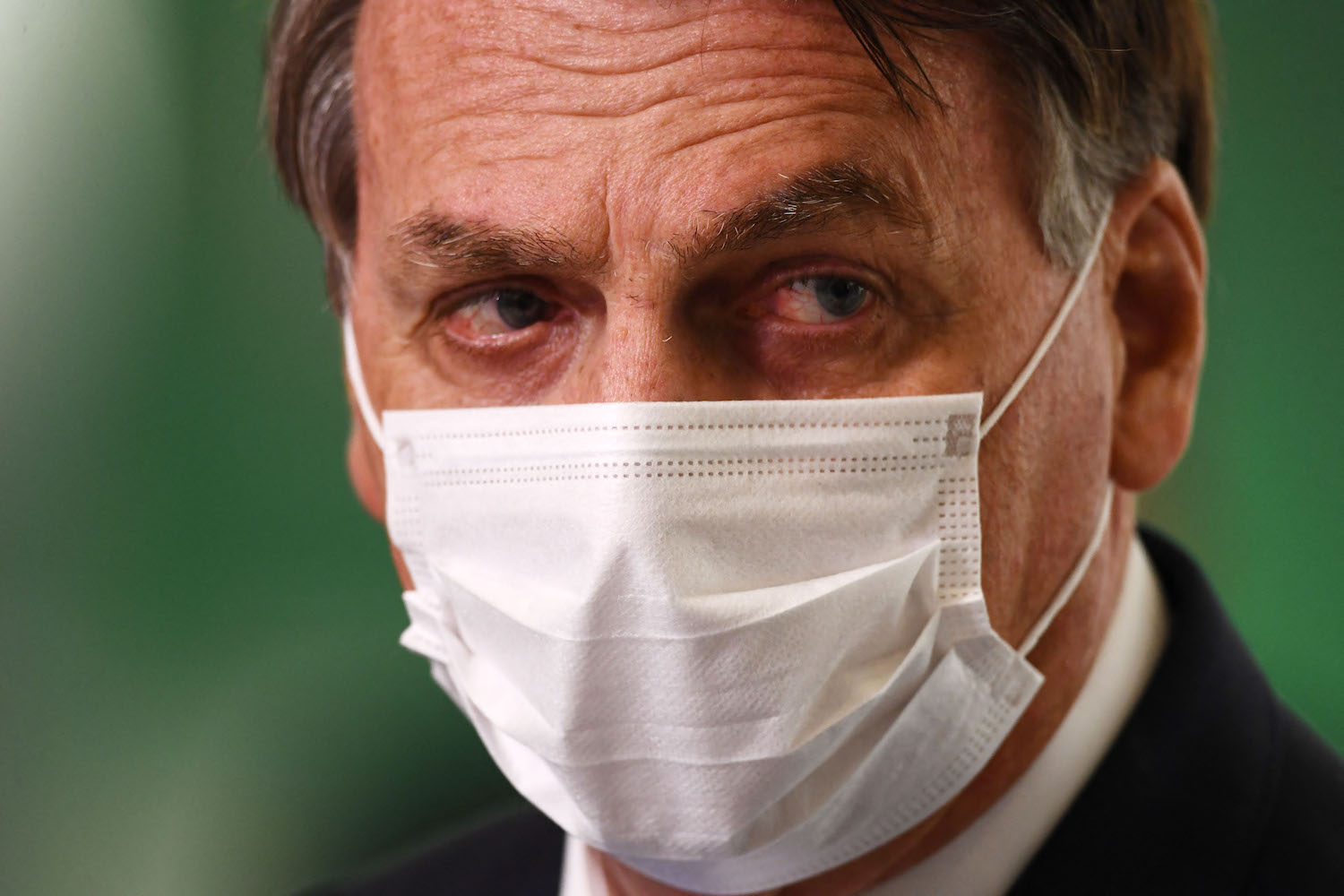 Brazilian President Jair Bolsonaro delivers a statement to members of the media at Planalto Palace in Brasília, on March 31.Evaristo Sa/AFP/Getty Images

Bolsonaro’s leadership shake-up. This week, the Brazilian leader swapped out six cabinet members. In part, the firings were aimed to appease a powerful bloc of lawmakers whose support President Jair Bolsonaro increasingly depends on as his own popularity falls. The lawmakers, for example, disapproved of Brazil’s anti-globalist foreign minister, whose hostility to China they say hampered vaccine access.

The country’s defense minister and the three top military commanders, however, exited their posts over a different conflict. They had disapproved of Bolsonaro’s statements and demands, including his recent order to fire a commander who disagreed with him on pandemic management and his endorsements last year of protests calling for a military intervention in Brazil’s National Congress and Supreme Court. The military’s upper ranks—who nominated the three commanders’ replacements—reportedly agreed not to support any possible request by Bolsonaro to carry out a coup.

Bolsonaro’s new handpicked defense minister, on the other hand, said the March 31 anniversary of Brazil’s 1964 military coup should be “celebrated.”

Colombian-Venezuelan border clashes. Long-simmering tensions between Venezuela’s military and Colombian armed groups on the two countries’ border have escalated in recent days, prompting an estimated 5,000 people to flee the area around the town of La Victoria. Caracas has deployed new police forces, and human rights groups in both countries have requested a United Nations envoy to respond to the humanitarian crisis. Colombia and Venezuela’s presidents, who have a poor relationship, have done little to de-escalate the situation.

Green central banking. In a more positive development about Brazil, the country’s central bank policies were ranked the second greenest in the G-20 by watchdog Positive Money. The bank has a history of requiring rural credit seekers in the Amazon to show their compliance with environmental regulations and restricting financing for crop expansion in environmentally sensitive regions, the only such ban in the G-20. Although such policies have been proven to reduce deforestation in the past, the report noted skepticism about whether current policies were actually being enforced.

The Pacific Alliance, on the other hand, is younger and is currently in the process of adding its first associate members. Which of the following countries recently reached an agreement to become an associate member?

In Focus: Narco-Politics in Honduras 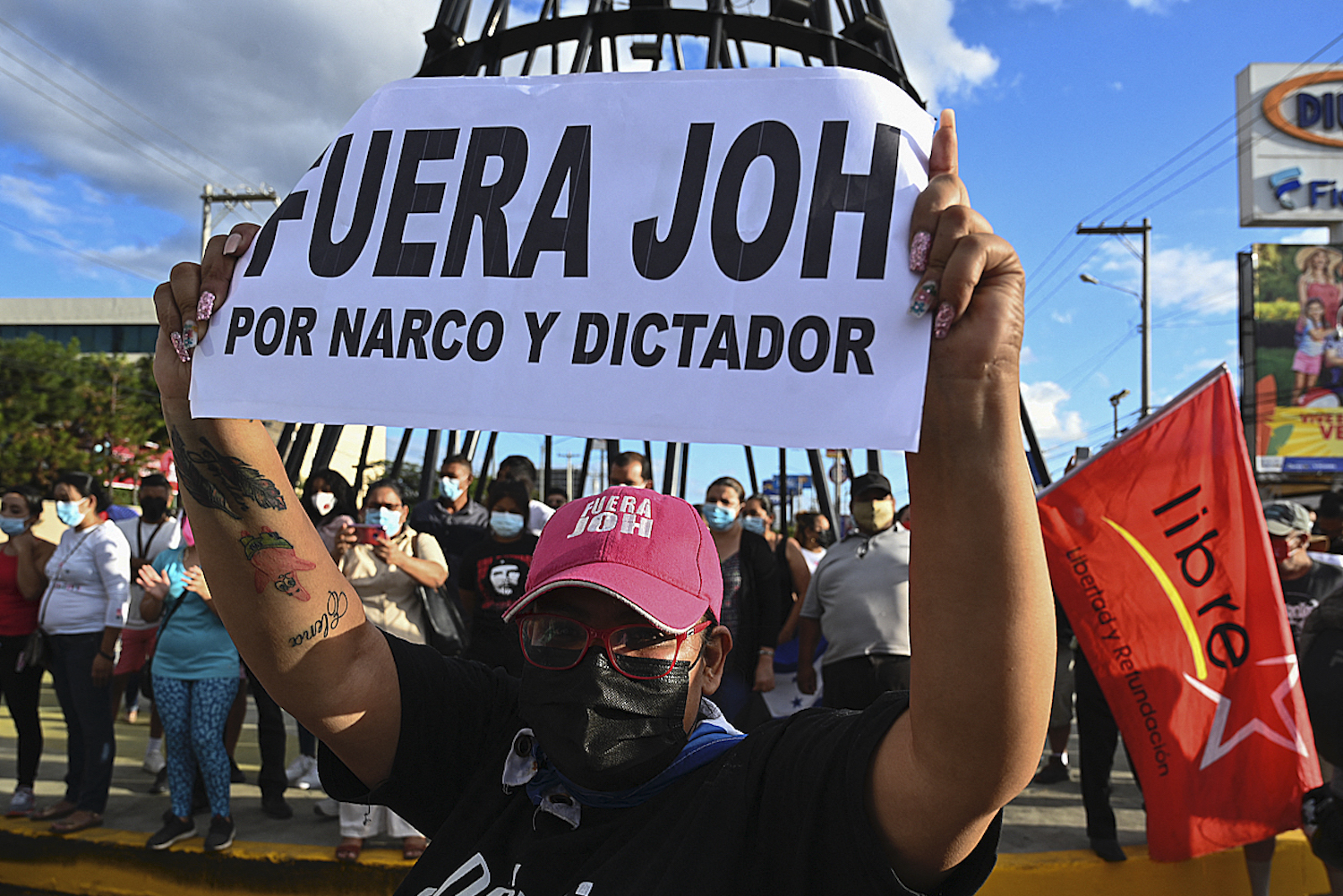 A woman holds a placard reading “JOH (Honduran President Juan Orlando Hernández) Out” as supporters of the opposition celebrate the sentencing of Tony Hernández in Tegucigalpa, on March 30.Orlando Sierra/AFP/Getty Images

Tuesday’s U.S. Justice Department sentencing of Honduran politician Tony Hernández noted he was a leader in “a violent, state-sponsored drug trafficking conspiracy”—and that one of his key accomplices was his brother, Honduras’s President Juan Orlando Hernández.

Other law enforcement investigations, summarized in a new InSight Crime report, paint a picture of Honduras’s ruling National Party as “a federation that welcomes politicians and officials involved in criminal businesses ranging from timber to drug trafficking to the misappropriation of public funds.” The National Party has ruled Honduras since the country’s 2009 coup, during which time the Honduran government has taken more than $200 million in U.S. policing and military aid, increased security budgets to the detriment of social spending, and seen the country’s murder and impunity rates for homicides become among the highest in the world.

A heavy U.S. hand. Former U.S. President Donald Trump’s support for the Hernández government helped the regime survive disputed elections in 2017, which the Organization of American States demanded a redo. The mounting evidence against Hernández comes at the same time as renewed calls for better oversight of U.S. policy toward Central America, including both a push to sanction Hernández and a relaunch this week of the Congressional Central America Caucus.

Elections looming. In November, Honduras will hold a presidential election between likely candidates that include a Hernández protegé, the runner-up in the disputed 2017 elections, and the wife of the president deposed in the 2009 coup. If Washington is reluctant to sanction Hernández before then, it may set a target on working to ensure those elections are free and fair.

Both Ecuador and Singapore reached accession agreements to become associate states of the Pacific Alliance in December. Australia, Canada, and New Zealand are on track to follow soon.

NEW FOR SUBSCRIBERS: Want to read more on this topic or region? Click + to receive email alerts when new stories are published on Foreign & Public Diplomacy, South America