“None of the above” is a popular vote in Ecuador and Peru, spelling legitimacy troubles.

The highlights this week: Bolivia, Ecuador, and Peru prepare for elections, 25 young Spanish-language novelists to watch, and the politics of vaccination in Venezuela.

The highlights this week: Bolivia, Ecuador, and Peru prepare for elections, 25 young Spanish-language novelists to watch, and the politics of vaccination in Venezuela.

The three countries that will hold votes are each living with the aftermath of political crisis and mass protest in the last two years. In the cases of Ecuador and Peru, very tight polling makes it difficult to predict presidential winners. As many as 20 percent of voters in Ecuador and 28 percent in Peru said in the final stretch of the campaign that they were still undecided or planned to cast blank votes, signaling low confidence in their options. One factor setting the two elections apart is that Peru’s presidential victor will face much more difficult congressional math in terms of real ability to carry out plans.

Consolidated forces in Ecuador. In congressional and first-round presidential elections held on Feb. 7, momentum from 2019’s protests was channeled into support for left-wing parties that defined themselves in opposition to leftist stalwart and former President Rafael Correa, whom they call authoritarian. The new more democratic and environmentally friendly left grew its representation in Congress, backing the second- and third-largest parties, the Indigenous Pachakutik party and the Democratic Left. Correa’s party is the largest; conservative right-wing parties are the fourth and fifth.

All told, after February’s elections, the three major forces in Ecuadorian politics—Correísmo, its competition on the left, and those to the right—are now healthily represented in the legislature. The two presidential candidates who will face off in this weekend’s runoff hail from Correísmo and the right. To pull votes from the new left, the candidates are appealing to Indigenous voters in the final stretch of the campaign, a signal of this bloc’s increased power in Ecuador’s new political landscape.

While the high levels of voters intending to leave their ballots blank indicates some automatic disapproval of the new president, Ecuador is a case where public grievances have translated into a new political map that appears better equipped to address them.

Extreme fragmentation in Peru. In Peru, the opposite is true. The country’s November 2020 political crisis centered around the legislature’s perceived push to shield itself from anti-corruption measures by removing the president. Mass protest led his successor to resign. But in the current presidential election, candidates have struggled to win widespread backing. In fact, none of the top five candidates has more than around 12 percent of voter support, according to the last two polls released.

In Congress, the scenario is similar, with polls pointing to extreme fragmentation among 12 parties, up from the current nine.

Peru has been troubled by weak political parties since at least the 1990-2000 Alberto Fujimori regime, and this election is no different. Even an extremely careful new president will face immense governability challenges.

In terms of economic outlook, while both Ecuador and Peru have been hard-hit by the pandemic—with Peru’s per-capita death count among the highest in Latin America—there are much more severe fiscal constraints on Ecuador’s economy than Peru’s, affecting which social policies will be possible in the recovery period.

A struggle to evolve in Bolivia. The runoff gubernatorial elections in four of Bolivia’s nine departments reflect a broader picture: former President Evo Morales’s Movement for Socialism remains the country’s largest political force, but it has lost vote count since the last such local elections, held before Bolivia’s 2019 political crisis.

As in Ecuador, in recent months Bolivia has mostly been able to channel public grievances through its electoral system; the party’s opposition on the left and right made significant gains in March 7 regional votes. This represents progress from the dramatic events of its 2019 crisis. But all three countries—Bolivia, Ecuador, and Peru—still face polarization, unemployment, and raging pandemics, which could ignite unrest once again, especially once quarantines begin to lift.

COVID-19 ravages the region. Half of the world’s COVID-19 deaths last week were in the Americas, with South America the world’s most worrisome region, the Americas director for the World Health Organization said Wednesday. New lockdowns and curfews are in place from Colombia to Argentina. The organization said delays from India’s Serum Institute—which has redirected planned vaccine exports for use to counter India’s domestic virus surge—could delay scheduled deliveries to Bolivia, Haiti, and Nicaragua.

Meanwhile, a shipment of vaccine materials from China to Brazil was delayed this week because of China’s new focus on speeding vaccination of its own population, CNN Brasil reported.

Mexico’s asylum infrastructure. Mexico has registered a record number of asylum petitions so far this year, over 22,000, and it is due for 80,000 by year end if current trends continue, according to the country’s top refugee official. He told El País that the government’s austere economic policy is inhibiting much-needed investment in an overwhelmed system. 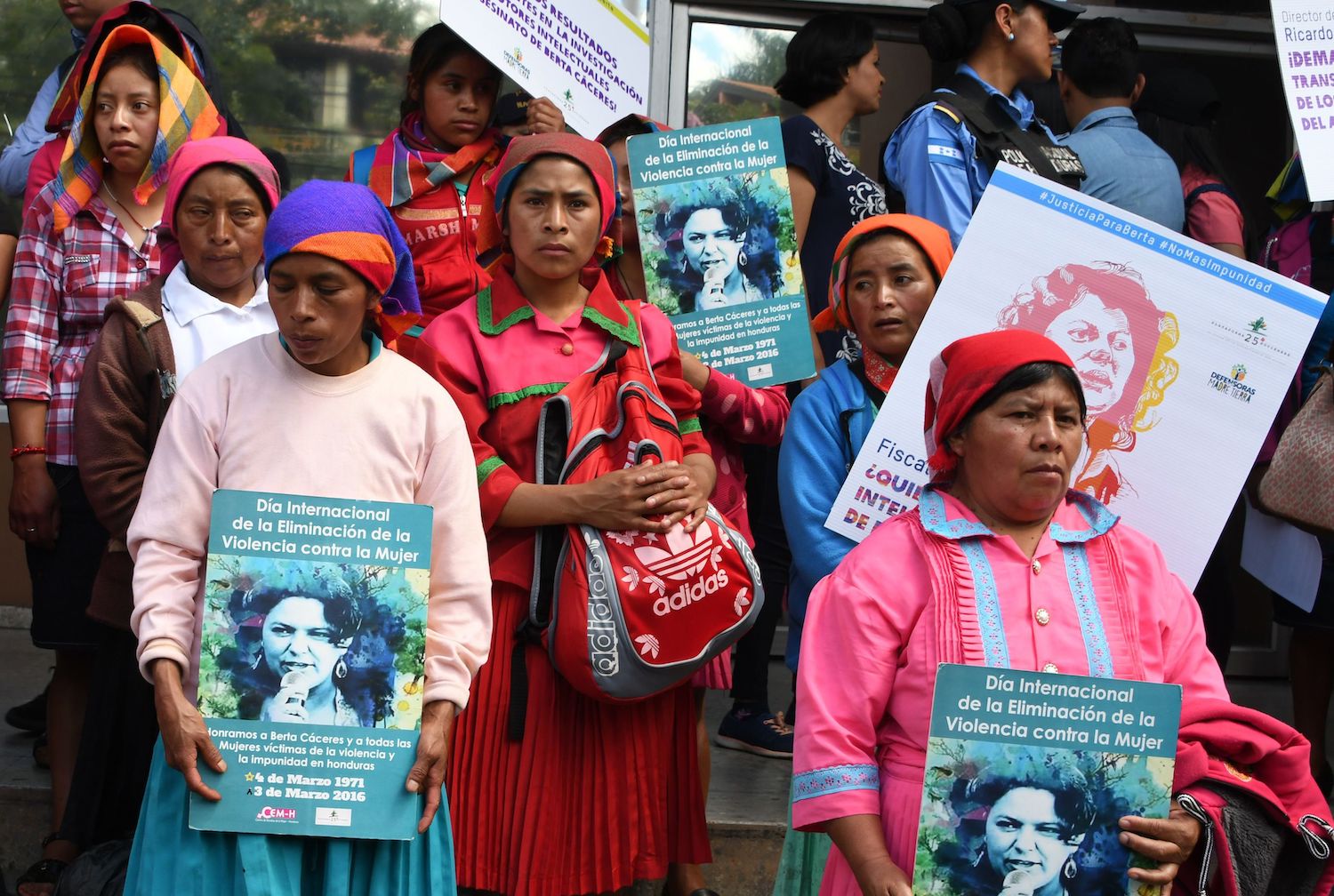 Women take part in a protest to demand justice in the murder of Honduran activist Berta Cáceres at the Public Ministry headquarters in Tegucigalpa on March 2, 2018. Orlando Sierra/AFP/Getty Images

Berta Cáceres trial. In a trial of David Castillo, the former manager of dam builder Desarrollos Energéticos (DESA) and alleged mastermind of the 2016 murder of Honduran environmentalist Berta Cáceres, lawyers representing Cáceres’s family presented documentation of a transfer authorized by a DESA executive of $1.2 million to a company directed by Castillo two days before the assassination. The trial was then suspended after Castillo’s lawyers asked the court to recuse itself.

Bukele snubs back. Salvadoran President Nayib Bukele, with whom Biden administration officials refused to meet in Washington in February, reportedly skipped a scheduled meeting in San Salvador with top U.S. envoy Ricardo Zúñiga that was scheduled for Wednesday. Zúñiga sought to dialogue with Bukele on measures to reduce the causes of migration from El Salvador to the United States, an effort Bukele has questioned.

Young writers to watch. In 2010, the last time Granta magazine published an issue featuring the work of Spanish-language novelists under 35, the list was overwhelmingly male and Argentine, with several of the Latin American writers having spent time in Europe. It has now published a new collection of 25 writers, 11 of them women, from Spain and across Latin America. Their stories are rich in detail of place and local vernacular, invoking Indigenous symbols and experimenting with language. Three writers are from Cuba; writers from Costa Rica, Ecuador, Equatorial Guinea, and Nicaragua also appear for the first time.

Mónica Ojeda, an Ecuadorian writer whose story in the collection is based on an Inca ceremony, told El País that literature is “the word that, like a spell, transforms matter by passing across it. Not betting on that dimension of writing would be wasting its potential.”

The International Monetary Fund’s biannual global economic forecast predicts unemployment generally falling across Latin America for 2021. In which country is unemployment expected to rise in 2021 compared to 2020, rather than fall? 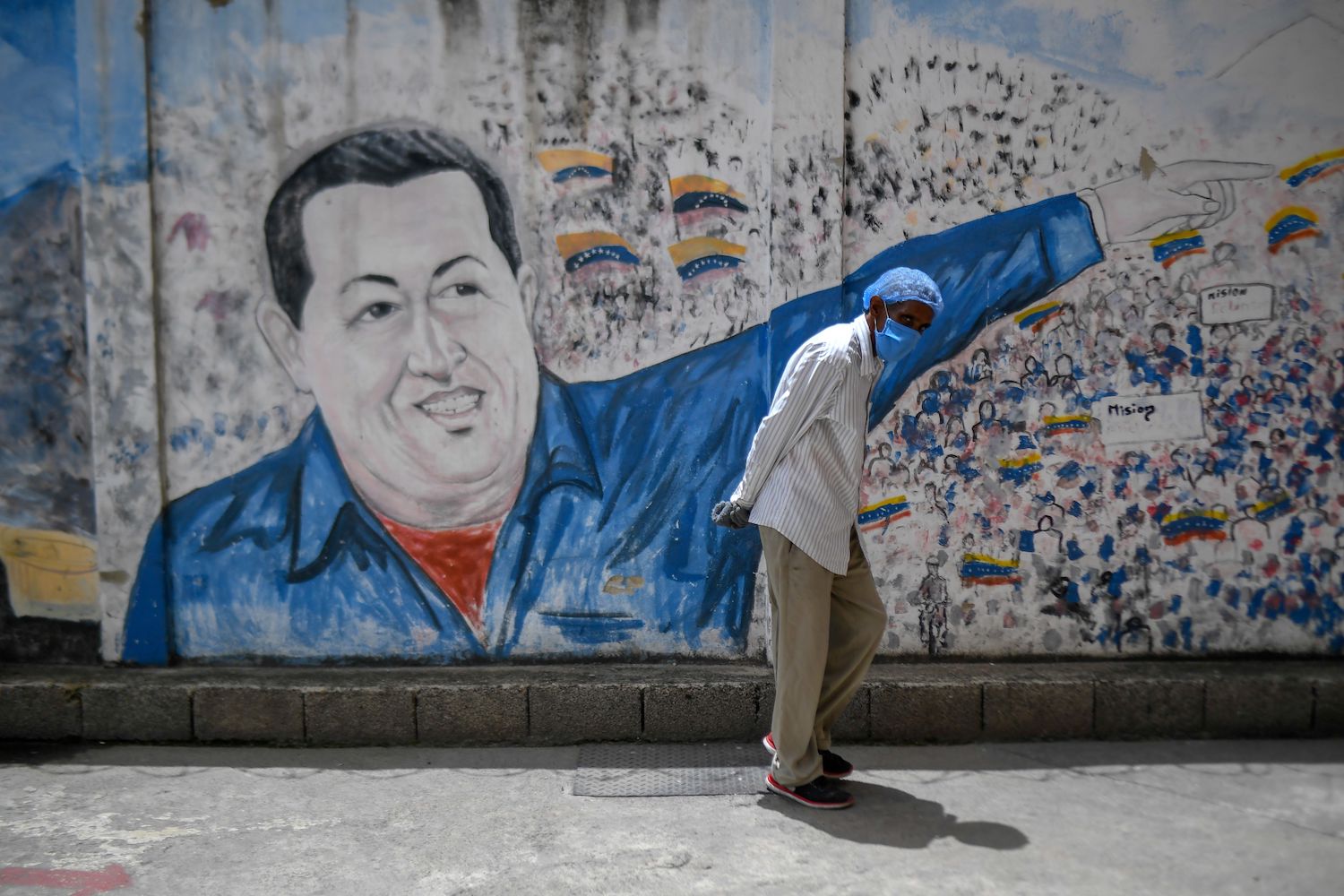 Venezuela is under its third week of stay-at-home orders amid a spike of COVID-19 infections. As of Monday the country had vaccinated less than 1 percent of its population—“the worst epidemiological scenario,” the country’s National Academy of Medicine and National Academy of Physical, Mathematical and Natural Sciences wrote this week.

Although President Nicolás Maduro promised 10 million Russian vaccines would reach the country in the first quarter of this year, only 2.5 percent of that amount arrived. Together with shots from China’s Sinovac, the country had received around 750,000 vaccine doses as of March 31. Maduro reached a rare agreement with the opposition in order to pay the World Health Organization for shots through its COVAX initiative, but then denied approval for the AstraZeneca shot, which COVAX planned to send.

A pandemic peak. The aforementioned national academies said the pandemic’s resurgence in Venezuela was due to the relaxation of social distancing measures since December and the entrance of new variants, among other things. COVID-19’s spread in 2020 was partly limited by the scarcity of gasoline in the country, which reduced mobility, they said, but now, “the weak and limited health infrastructure has collapsed from growing demand.”

Ongoing political pushes. Negotiations continue between the government and the opposition about the possibility of procuring the Johnson & Johnson shot via COVAX, which could be delivered sometime in July. In the meantime, the call for a robust vaccination plan is a key demand of a new civil society coalition that aims to push toward a political transition in the country.

While Maduro’s grip on power in Venezuela is stronger than ever after many in the opposition boycotted the last legislative elections, on Tuesday several opposition groups announced a new commitment to unity and broadening their coalition, with a focus on securing pandemic relief.

The IMF calculates that Brazilian unemployment was 13.2 percent in 2020 and will rise to 14.5 percent in 2021, with the caveat that uncertainty about the pandemic’s course means this is subject to change. Brazil provided significant financial support to individuals and businesses during 2020, and unemployment did not rise as much as it did in Argentina, Colombia, and Ecuador. Even so, Brazil abruptly removed much of the support in January, and its increase in unemployment from 2019—before the pandemic—to 2021 is still higher than in those three countries.

One of the few major Latin American countries where employment is expected to return to 2019 levels this year is Mexico, buoyed by the recovery in the United States.

Peru’s Election Is About to Make Its Problems Worse

This weekend’s vote will deepen the pandemic-ravaged country’s impasse.