Western democracies look the other way as a dictatorial ally in the war on terror holds another election marred by violence and intimidation.

This week’s highlights: Buoyed by international alliances, Chad’s long-serving autocratic president will cruise to electoral victory. Mozambique accepts some help from its friends, and there’s a clear link between distrust of government and vaccine hesitancy in Africa.

This week’s highlights: Buoyed by international alliances, Chad’s long-serving autocratic president will cruise to electoral victory. Mozambique accepts some help from its friends, and there’s a clear link between distrust of government and vaccine hesitancy in Africa.

Idriss Déby Is Protected by the Fight Against Terrorism

President Idriss Déby was a clear front-runner in Chad’s presidential election this past week and is on course to win his sixth term.

Déby, 68, came to power as the head of the Sudanese-supported Patriotic Salvation Movement that removed the brutal dictator Hissène Habré in 1990. Instead of ushering in democracy, Déby sought to consolidate a military regime that is rubber-stamped by regular elections.

Needing an ally in the troubled Sahel, Western powers have consistently turned a blind eye to Déby’s autocratic rule. He was a key French ally in curbing Libyan dictator Muammar al-Qaddafi’s expansion further south, and when a Chadian rebel force tried to overthrow Déby by advancing from Libya in 2019, France deployed warplanes to come to his aid.

The wealth from Chad’s oil fields has never trickled down to the broader public, making it one of the poorest countries in the world. Since 2014, various civil society movements—from students to labor unions—have protested the worsening economic and political environment, but Déby has crushed dissent.

Removing the competition. As the first person in the country to cast his ballot on April 11, a confident Déby faced little competition. Days before, his interior ministry announced the arrest of several people, including opposition political leaders, in an alleged assassination plot.

The government alleged they planned to disrupt the election by bombing polling stations and the electoral commission headquarters. To reinforce security, soldiers patrolled the capital, N’Djamena, and polling stations around the country. It seems they would have faced little trouble with many voters heeding a call from opposition leaders to boycott the election.

A successful boycott? Local media reported that polling stations saw little traffic, particularly in opposition strongholds. Still, the ruling party celebrated a large voter turnout while the opposition claimed the opposite. Remadji Hoinathy, a senior researcher at the Institute for Security Studies, told Foreign Policy he witnessed a lower turnout at polling stations south of the capital.

“This means that the call for a boycott was heeded but, more importantly, that the voters understood that the election had very little at stake,” Hoinathy said. “This is a fact on which the opposition can build in the future.”

A fragmented and frightened opposition. Before the election, the opposition tried to mount a united front, with 15 opposition parties rallying behind relative newcomer Théophile Bebzoune Bongoro under the banner of the ambitiously named Victory Alliance in February.

A month later, Bongoro withdrew from the race. So did the main opposition leader, Saleh Kebzabo, who had the backing of five other opposition figures, stepping aside after a raid at another opposition leader’s home. That leader, Yaya Dillo, accused presidential guards of attacking his home in the early hours of the morning and killing his mother, son, and three other relatives.

The race shrank from 16 contenders to six by election day as more opposition leaders bowed out or were barred from running or arrested. Security forces also cleared the playing field by cracking down on demonstrations organized by civil society groups and labor unions calling for change, according to Human Rights Watch. Protesters said their calls for political and economic reforms were met with excessive force.

A once lonely dictator gains confidence. Déby was once a relatively lonely dictator. In the aftermath of the Darfur conflict in 2006, Déby found himself pitted against old ally Sudan while Qaddafi’s influence in West Africa left him isolated. As the old guard fell away, a new conflict spread across the Sahel.

Déby, a consummate army officer, was poised to respond. His army quickly became a reliable ally in helping to neutralize Boko Haram in the Chad Basin and Ansar Dine in northern Mali. Today, Chad is a key player in the G5 Sahel Joint Force, an alliance with Burkina Faso, Mali, Mauritania, and Niger that enjoys international support, not only from France but from the United States and European Union too.

“Chad’s geostrategic position but, above all, President Déby’s leadership and voluntarism in the fight against terrorism both in the Sahel and in the Lake Chad Basin, is a central element of his diplomacy but, above all, of his legitimacy with his Western partners, including France,” Hoinathy said. “It has become one of the main factors by which Chad is seen, relegating sociopolitical tensions, the backwardness of the democratic process, [and] poverty to second place.”

Déby is now such a bulwark in the global fight against fundamentalist terrorism, the world’s democratic countries appear more willing than ever to overlook the iron fist he wields in his own country.

Talon tightens his grip on Benin. President Patrice Talon is headed for a landslide victory in an election marked by protest and dissent. In the days before Beninese went to the polls, demonstrations erupted as opposition leaders and their supporters decried the narrowing of a once thriving democracy.

Along with the detention of some opposition figures, Talon has been criticized for reneging on a 2019 agreement to only serve one term as the country sought to reform its electoral laws. Instead, as Tim Hirschel-Burns wrote in Foreign Policy, “Talon’s procedural reforms are a master class in entrenching autocracy while preserving the sheen of democracy.”

Djibouti’s long-time leader wins another election. Winning a reported 97.44 percent of the vote, Djibouti’s President Ismail Omar Guelleh was reelected for his fifth term on April 10. Guelleh’s opponent, businessman-turned-politician Zakaria Ismail Farah, described his vote and that of other voters as being “of no use.” Observers from the African Union did not raise any issues, however.

Situated in a war-torn region that includes Yemen, Ethiopia, Eritrea, and Somalia, Djibouti has positioned itself to punch far above its geopolitical weight. The country is home to U.S., French, Italian, Chinese, and Japanese military bases, and a Saudi one has been approved. Its allies have routinely overlooked the Guelleh regime’s human rights abuses, including brutally crushing protests in 2020.

While leaders of South Africa, Botswana, Zimbabwe, Malawi, and Tanzania agreed to set up a technical committee to plot the way forward, Mozambique reasserted its sovereignty, saying it would lead any intervention against the insurgent group. “In the end, Mozambique will have to take the lead. It cannot outsource its sovereignty and its security responsibilities,” Mozambique’s President Filipe Nyusi said at the end of the summit. 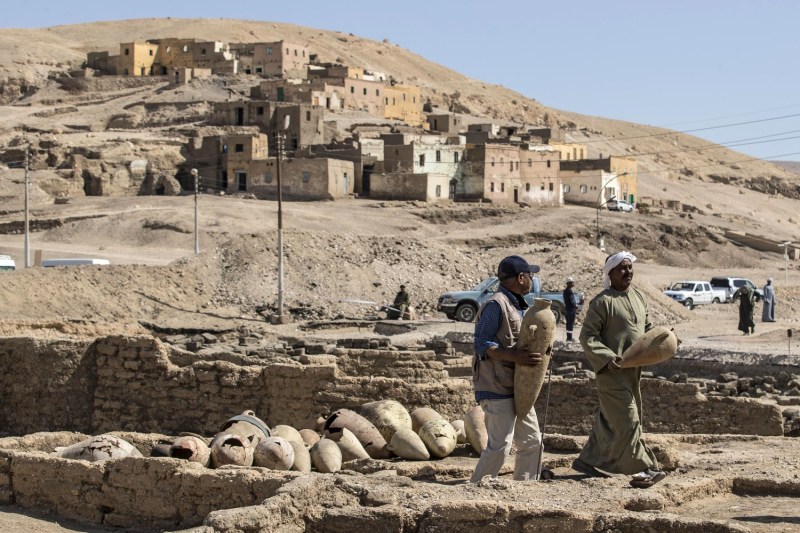 Workers carry pots at the archaeological site of a 3,000-year-old city dating to the reign of Amenhotep III—dubbed the “Rise of Aten”—which was uncovered by an Egyptian mission near Luxor, Egypt, on April 10.KHALED DESOUKI/AFP via Getty Images

A new lost city is found in Egypt. Archaeologists have discovered a 3,000-year-old lost city described as the most important discovery since the tomb of Tutankhamun. The “Rise of Aten” city was unearthed in an excavation that began in September 2020 in the Valley of the Kings near Luxor, Egypt, and has been dated to 1,390 B.C. based on the royal seals found on the site.

The well-preserved city showed evidence of industry, including a bakery as well as pottery, metal, and glass manufacturing. It could also solve the mystery of why Queen Nefertiti and King Akhenaten moved the dynasty’s capital about 250 miles north from Luxor to Amarna, changing the course of ancient history. The find is also a boon to Egypt’s tourism industry, which has been hard-hit by the coronavirus pandemic.

Across five West African countries, the pan-African research network Afrobarometer surveyed citizens who said they were unlikely to get vaccinated. The researchers found that this hesitancy directly correlated to a lack of trust in the ability of governments to procure and safely roll out the vaccine.

Didi drives growth in South Africa. Chinese ride-hailing app Didi Chuxing has entered the South African market. After a pilot in Gqeberha, South Africa (formerly Port Elizabeth), the app formally launched in Cape Town on March 29, registering more than 2,000 drivers. South Africa is the latest market for the Beijing company as it increases its global reach; it already operates in New Zealand, Russia, and Peru.

In South Africa, Didi is emphasizing its safety features, including SOS buttons for passengers, a 24-hour safety hotline, and linking drivers to police, which is likely to resonate with customers in a country with a consistently high crime rate.

But it also enters a country where drivers for competitors Uber and Bolt are currently gearing up for a class-action suit to formalize the gig economy, forcing companies to recognize drivers as employees. Lawyers for the drivers are working with the British law firm that helped change the same legislation in the United Kingdom.

Does Tanzania have a feminist president now? It’s too soon to tell how Tanzanian President Samia Suluhu Hassan will tackle gender inequality, but she could start by rolling back some of late President John Magufuli’s sexist policies and the toxic environment created by his statements, Khalifa Said writes in African Arguments.

The faithful find humanity in Kenya’s queer folk. “I used to look down on them, but Alhamdulillah [“praise be to God”] I am here now. I now am looking at them as people.” In the New Frame, Carl Collison documents how a religious community in Mombasa, Kenya, changed its views on LGBTQ+ rights, becoming advocates in a country that still outlaws same-sex relationships.

Ones and Tooze Podcast: Boris Johnson and the Sordid Arithmetic of Partygate

What the Death of Two Cultural Giants Says About Brazil Today

Is France Making Its Own Russia Play?

Ones and Tooze Podcast: Boris Johnson and the Sordid Arithmetic of Partygate

What the Death of Two Cultural Giants Says About Brazil Today

Is France Making Its Own Russia Play?