The risk of invasion remains small, but Beijing’s rhetoric and posturing raises some red flags.

The highlights this week: Beijing launches the biggest incursion near Taiwan in a year, a Chinese health official backs down from criticizing its vaccines, and the government escalates its campaign against Alibaba.

The highlights this week: Beijing launches the biggest incursion near Taiwan in a year, a Chinese health official backs down from criticizing its vaccines, and the government escalates its campaign against Alibaba.

Twenty-five Chinese jets breached Taiwan’s air defense identification zone on Monday, China’s largest incursion into Taiwanese airspace in a year. The maneuver is part of a long-standing Chinese harassment campaign that intensified last year, when Taiwan saw a record 380 incursions. Intended to wear down Taiwanese morale, the constant intrusions force risky and costly scrambling by its fighters in response. Taiwan has said it will no longer respond by dispatching jets and, instead, by tracking the flights with missile defense systems.

The intensified campaign in part results from increasing nationalism within the Chinese system. Chinese jets have reportedly broadcasted threats and claims to Taiwan over the radio. It is also a response to signals that the United States is growing closer to Taiwan. Last week, the Biden administration loosened restraints on U.S. officials meeting with their Taiwanese counterparts and dispatched a team of retired politicians to Taipei in what a White House official called a “personal signal” of his commitment.

These gestures are all symbolic, but it’s hard to overstate how much they matter in generating anger inside the Chinese political system.

Hatred of the idea of an independent Taiwan is drummed into Chinese kids from kindergarten. Chinese officials have walked out of meetings where a small gesture of recognition is given to Taipei, torn up conference materials that mention Taiwanese sponsorship, and pressured others to exclude Taiwan—including the Canadian government, which reportedly threatened not to host the prestigious Halifax International Security Forum if Taiwanese President Tsai Ing-wen received an award.

The chance of actual Chinese invasion still remains small, despite recent warnings from U.S. admirals. To assemble the forces required for even a chance of success would take China weeks at best and be visible well in advance. Discounting the high likelihood of U.S. intervention, amphibious invasions against a defender that has spent decades digging in is incredibly risky, even if the Taiwanese military faces logistical and morale issues. Rationally, an invasion would be a very high-risk move from a largely risk-averse leadership.

The question is: Is the Chinese leadership acting rationally? In the last year, the tone of its rhetoric has intensified in a way that alarms even seasoned readers of Beijing’s language. Chinese diplomats’ aggressive posturing and state media’s violent rhetoric seem off—it could mean Beijing is capable of making dumb mistakes. In a system where backing down from conflict could leave military leaders or provincial officials politically exposed, a small clash in the ocean or in the air could very easily spin out of control.

Vaccine failures. As discussed in last week’s edition, Chinese COVID-19 vaccines increasingly appear ineffective compared to their Western counterparts. A study in Chile has found the Sinovac shot has just 50.4 percent efficacy two weeks after the second dose. Gao Fu, the head of the Chinese Center for Disease Control and Prevention, publicly noted that “current vaccines don’t have very high protection rates” on Sunday—comments that he quickly walked back.

In Brazilian studies, the Chinese-made vaccines do seem to have a strong effect in preventing hospitalization or death. But data from Chile and other countries with mass vaccination campaigns with Sinovac or Sinopharm still show a steep rise in transmission alongside declining hospitalization and death rates.

My guess is Gao wanted to create impetus for vaccine change policy inside China, either by increasing flexibility about importing foreign vaccines or bolstering research for China to develop its own effective mRNA vaccine. Gao likely came under immediate backlash internally, either because of general defensiveness or from specific high-level sponsors of the vaccines. This response doesn’t bode well for an honest approach going forward.

Historical revisionism. China has launched a national hotline to report on people for sharing “historical nihilist” comments online. The term, coined by former General Secretary of the Chinese Communist Party Jiang Zemin in 1989, fell largely out of use until Chinese President Xi Jinping came to power in 2013. Since then, the government has mounted an intense campaign against any critical revision of official history, stretching back beyond the party’s own rule to interpretations of the past that don’t match Beijing’s ethnonationalist line.

Attacks on Maoist-era heroes seem to be singled out for punishment, despite the rank implausibility of many of the era’s propaganda tales. A key high school history textbook, meanwhile, has seen recent revisions that emphasize anti-U.S. sentiment and reduce the coverage of the Cultural Revolution, portraying it as an “anti-corruption” campaign that went astray.

Tainted water. China has raised strong objections to Japan’s decision to release radioactive water, stored after the Fukushima nuclear accident in 2011, into the Pacific Ocean. South Korea and Japanese environmental groups have also lodged complaints, but Tokyo and the International Atomic Energy Agency both say the move follows standard international practice. Ten years ago, Fukushima caused a wave of understandable but unnecessary public panic about radiation in China, leading to mass purchases of salt.

Alibaba smackdown. The government campaign against Alibaba and its co-founder Jack Ma continues, with a record $2.8 billion fine leveled on the company for “anti-trust violations.” It’s worth remembering that Chinese firms have little recourse when the government imposes fines or forcibly breaks up companies. Instead, as Alibaba has, they must abnegate themselves in public in the hope of getting back into the Chinese Communist Party’s good graces. (The central authorities putting Alibaba in the firing line also gave local authorities free rein to go after it, resulting in more fines for various violations.)

The move is part of a wider crackdown by Beijing against technology firms, which it perceives as holding a dangerous amount of power. Whether the government can pull off greater control over the industry while maintaining the high innovation levels that made Chinese firms a world leader in some fields, such as financial technology, remains unclear.

Semiconductors and the U.S.-China Innovation Race, a special report by FP Analytics examines the interconnectivity and fragility of global supply chains and the central role of Taiwan in global tech competition. Read it now.

Chip battles. Recent U.S. additions to the entities list, a trade blacklist, have resulted in Taiwanese firms suspending semiconductor sales to the Chinese supercomputing firm Phytium. Semiconductors have become a subject of contention since a Chinese plan to boost domestic development by 2021 flopped—leaving firms largely dependent on imports, especially from Taiwan. China is importing record numbers of semiconductors in anticipation of further U.S. limits.

The Taiwanese-Chinese economic relationship, as Bonnie Glaser and Jeremy Mark write in Foreign Policy, has remained strangely untouched despite their growing rift.

Warfare at sea. China has registered the names of hundreds of disputed islands and sea features as trademarks, a program started in 2014 and initiated under the auspices of Sansha City. Sansha isn’t a real city; it’s an administrative creation and military base with a population of around 1,400 people that is used to drive China’s claims in the South China Sea. The trademarks seem intended for use in possible legal cases against other claimants, such as the Philippines and Vietnam. It’s unlikely they would make a real difference, but they could be used to shape disputed maps—a perennial Chinese obsession. 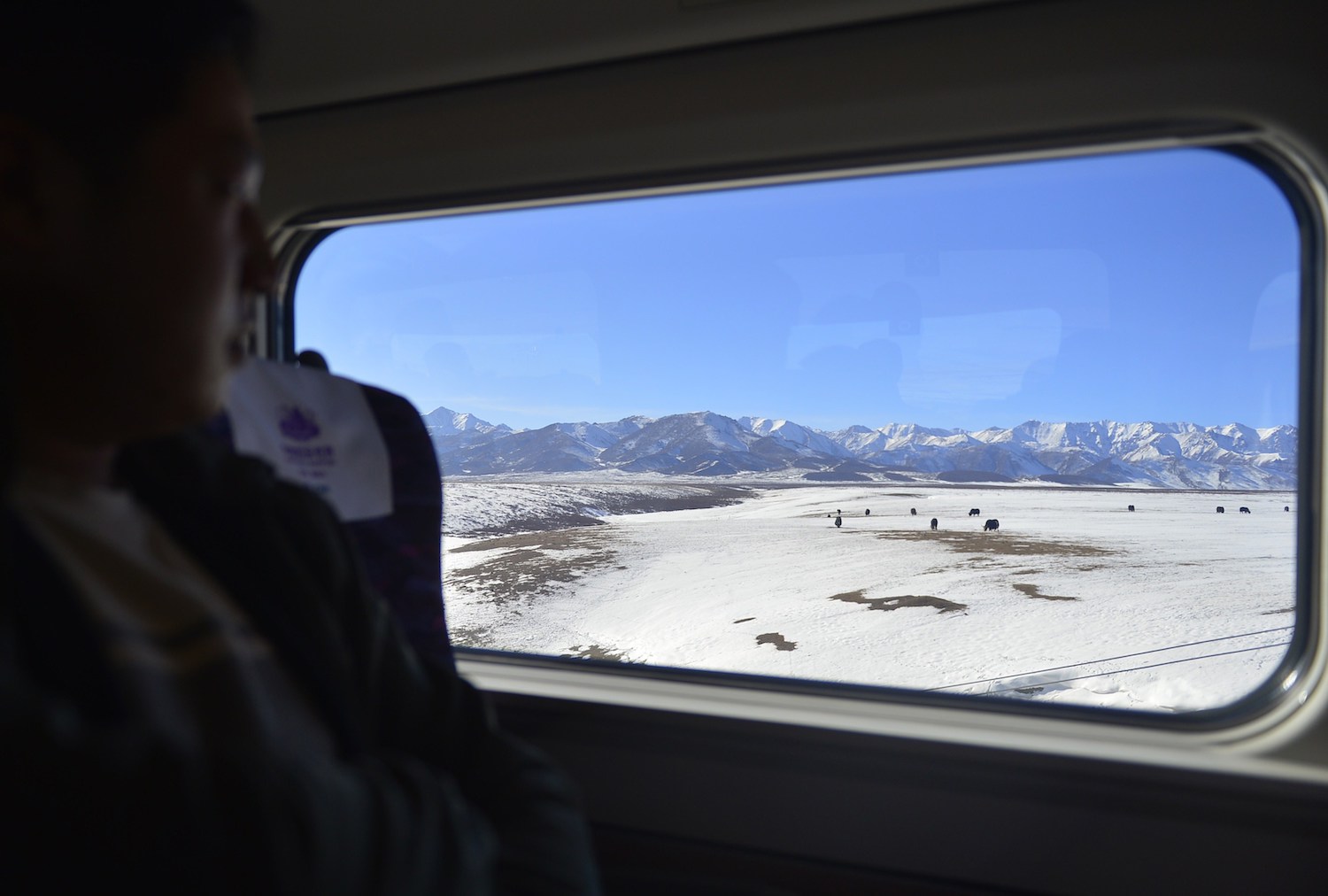 A passenger looks through the window of a train from Lanzhou to Xinjiang as it leaves the west railway station in Lanzhou, China, on Dec. 26, 2014.STR/AFP via Getty Images

Before Qing dynasty conquests put Xinjiang inside the empire’s orbit, the province of Gansu marked China’s western borderlands—a cultural crossroads that saw frequent revolts, incursions, and expeditions. Lanzhou, the capital, became the center of Qing government resistance against the Dungan Revolt (1862-1877), in which a dispute between Sufi sects erupted into a Muslim rebellion. (Dungan is an old name for the Hui, China’s second-largest Muslim group after the Uyghurs.) The revolt saw the mass depopulation of the region through migration and retaliatory killings by both rebels and government forces.

Caught in an airless valley with frequent desert storms, Lanzhou is still dotted with mosques, although its Muslim population is now a minority and many sites have been destroyed as part of China’s campaign against Islam. Today the city is mostly famous for Lanzhou lamian, hand-pulled noodles usually served in beef broth and derived from Hui cuisine.

Lanzhou has benefitted economically from the Chinese government’s determination to transform the historically poor and underpopulated west. Industry and oil revenue has made the city an economic success story, the rich capital of a poor province.

NEW FOR SUBSCRIBERS: Want to read more on this topic or region? Click + to receive email alerts when new stories are published on Military, Security, China, Taiwan