Biden administration officials have said U.S. troops are leaving the battlefield in Afghanistan, but the U.S. aid spigot won’t end.

Welcome to Foreign Policy’s Security Brief. Whew, what a week: U.S. troop withdrawals, NATO visits, and sanctions on Russia. Who’s ready for a quiet weekend with some maple taffy on a stick?

The highlights this week: The Biden administration pledges to keep up U.S. aid to Afghanistan, the White House unveils a bevy of top diplomats, and top U.S. spooks pay a visit to Congress.

Welcome to Foreign Policy’s Security Brief. Whew, what a week: U.S. troop withdrawals, NATO visits, and sanctions on Russia. Who’s ready for a quiet weekend with some maple taffy on a stick?

The highlights this week: The Biden administration pledges to keep up U.S. aid to Afghanistan, the White House unveils a bevy of top diplomats, and top U.S. spooks pay a visit to Congress.

As quick as the Biden administration was this week to announce the withdrawal of all U.S. troops from Afghanistan by Sept. 11, it was just as quick to insist the power of the U.S. taxpayer dollar wasn’t going anywhere.

“While we will not stay involved in Afghanistan militarily, our diplomatic and humanitarian work will continue,” U.S. President Joe Biden said in a speech on Wednesday announcing his decision.

Lawmakers, who hold the proverbial power of the purse, agreed. “We need to be able to continue to up some of our assistance to the Afghan government,” Rep. Andy Kim, a New Jersey Democrat who sits on both the House Foreign Affairs Committee and House Armed Services Committee, told Security Brief. “The Afghan government is very much dependent and reliant on our support, on the support of other coalition partners, and that does need to continue.”

Kim, who was formerly a U.S. diplomat posted to Afghanistan and a National Security Council staffer before running for Congress, said providing development and security assistance to the Afghan government will help prevent terrorist groups from gaining enough strength to pose a threat to the United States.

But what good does that money do? The United States has spent an estimated $143 billion in overall development and aid projects in Afghanistan over the course of two decades, including security assistance, governance, and humanitarian aid projects. By many standards, Afghanistan has made considerable strides since then, such as in education, women’s rights, cutting infant mortality, and other crucial metrics of development and welfare. But all that progress was made in a protective sphere of (relative) stability backstopped by U.S. and NATO troops.

Even then, a lot of that money hasn’t been exactly well spent, as many multimillion-dollar programs are full of mismanagement, fraud, or corruption. (In 2016, for example, a government watchdog found the United States squandered nearly half a billion dollars on Afghan mining projects alone.)

Dollars on the ground replace boots on the ground. This raises the question: After U.S. troops leave, can all those aid and development programs safely continue—and with adequate oversight? In other words, can money make up for the absence of troops? Some experts believe it’s a risky gamble for the United States to make.

Richard Fontaine, head of the Center for a New American Security, brought up another good point on Twitter: If the United States is tired of having boots on the ground in Afghanistan, how long before Congress tires of pouring billions of dollars worth of foreign aid into Afghanistan?

“Continued financial support to the Afghan security forces will be critical after a U.S. withdrawal. History suggests, however, that Congress may well tire of writing billions of dollars in checks to a foreign military without U.S. troops in the field,” Fontaine tweeted.

The White House sent a slew of nominees for senior national security and diplomatic posts to the Senate this week. We’ve tracked them all here:

State gets a new deputy. On Tuesday, the Senate confirmed Wendy Sherman to be deputy secretary of state by a vote of 56-42. Politico’s Nahal Toosi reported Biden is also moving quickly on leaders at the State Department’s regional and functional bureaus, tapping Marcia Bernicat as director-general of the U.S. foreign service, Molly Phee to be assistant secretary of state for African affairs, Karen Donfried to be assistant secretary of state for European and Eurasian affairs, and Barbara Leaf to the agency’s top Middle East job (previously reported by Foreign Policy).

The picks could come as soon as today, along with new leaders for diplomatic security, international organizations, and conflict and stabilization.

Cracks in the Pentagon’s glass ceiling. Biden tapped Christine Wormuth, the former top Defense Department policy official in the Obama administration, to serve as secretary of the Army this week. Wormuth, who led Biden’s Pentagon transition team after Kathleen Hicks was tapped as deputy secretary of defense, would be the first woman to hold the role, which requires a Senate confirmation. Biden has also nominated Susanna Blume to lead the Defense Department’s Office of Cost Assessment and Program Evaluation, a title she was holding on an acting basis.

Elsewhere in NatSec land. Meanwhile, Jill Hruby, an experienced engineer, is Biden’s pick to lead the National Nuclear Security Administration within the Energy Department, which oversees the U.S. nuclear weapons stockpile. Christine Abizaid, who was a top Pentagon official for Afghanistan and Pakistan during the Obama administration, is Biden’s choice to lead the National Counterterrorism Center. She’s also the daughter of John Abizaid, a retired Army general who served as U.S. ambassador to Saudi Arabia under Trump.

Kahl me maybe. More trouble ahead for Colin Kahl, Biden’s pick to become the Pentagon’s policy chief. Some 18 Republican senators, including the GOP leader on the Senate Armed Services Committee, Jim Inhofe, sent a letter to FBI leadership this week asking if the former Biden aide revealed classified info in past tweets. Kahl made it through committee on a tied vote last month and is awaiting a floor vote on confirmation.

DHS moves. This week, Biden nominated John Tien to be deputy secretary of the Department of Homeland Security; Jen Easterly to be director of DHS’s Cybersecurity and Infrastructure Security Agency; Ur Jaddou to head Citizenship and Immigration Services; Chris Magnus to be commissioner of Customs and Border Protection; Jonathan Meyer to be DHS general counsel; and Robert Silvers to be undersecretary for strategy, policy, and plans.

U.S. Central Command chief Gen. Frank McKenzie Jr. is set to testify in the House of Representatives on April 20.

Global threats. Dust off your bingo cards, national security wonks. For the first time in two years, Congress is holding global threats briefings this week, an unclassified assessment of the top U.S. national security threats from all of the intelligence chiefs, and there’s no surprise what’s top of mind for the United States’ leading spooks: China.

Speaking before the Senate Select Committee on Intelligence yesterday, Director of National Intelligence Avril Haines called China an “unparalleled priority” and highlighted Beijing’s cyberthreats as having the potential to disrupt U.S. critical infrastructure. 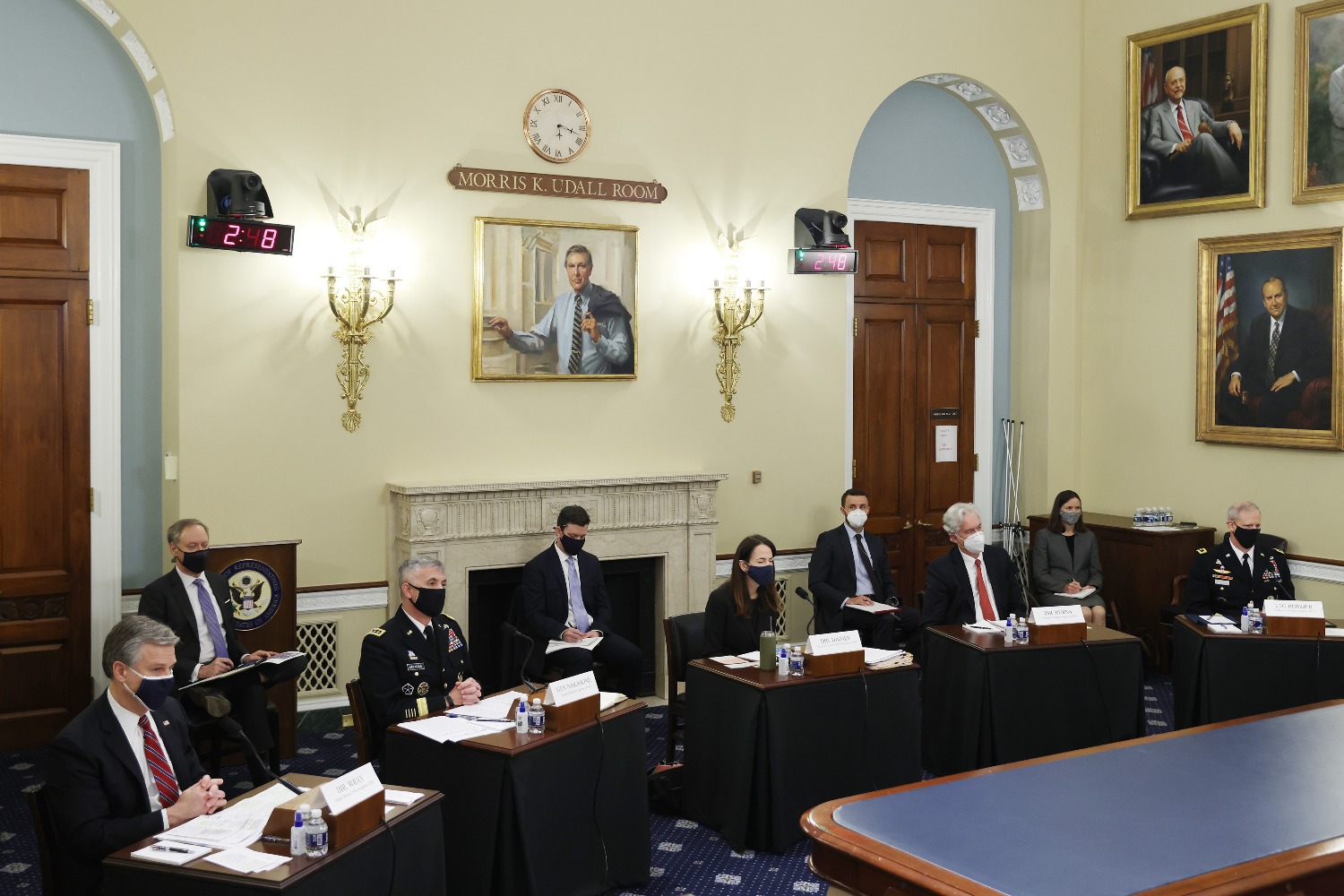 Director of National Intelligence Avril Haines and other leaders of the U.S. intelligence community testify before the House Permanent Select Committee on Intelligence at the Capitol in Washington on April 15.Tasos Katopodis-Pool/Getty Images

Bounties busted. Speaking of intelligence assessments, remember last summer’s big story that the Russian government paid bounties to the Taliban to kill U.S. troops in Afghanistan? The U.S. intelligence community isn’t so sure about it, and the Biden administration expressed little confidence in the narrative in a statement today.

“The United States intelligence community assesses with low to moderate confidence that Russian intelligence officers sought to encourage Taliban attacks [on] U.S. and coalition personnel in Afghanistan in 2019 and perhaps earlier,” a senior administration official said.

Taiwant more. The Biden administration is calling on Japanese Prime Minister Yoshihide Suga to sign onto a joint statement of support for Taiwan during a visit to the White House on Friday, the Financial Times reported, after Chinese aerial incursions over the island increased in recent days.

It would send another high-level message to Beijing after U.S. Secretary of Defense Lloyd Austin and U.S. Secretary of State Antony Blinken called for “peace and stability in the Taiwan Strait” in a joint statement with their Japanese counterparts during a visit to Tokyo last month.

Infrastructure Week. While the Biden administration has been busy with foreign policy, the White House has also come under fire from congressional Republicans for broadly defining the term “infrastructure” in a $2.3 trillion plan being debated on Capitol Hill.

What counts as infrastructure in foreign policy and national security? We want to publish your thoughts in next week’s Security Brief! Be as creative as possible, please.

“If we instead pursue the approach where … U.S. exit is tied to conditions on the ground, we have to have clear answers to the following questions: Just what conditions be required to allow us to depart? By what means, and how long would it take to achieve them—if they could be achieved at all? And at what additional cost in lives and treasure?

I’m not hearing any good answers to these questions. And if you can’t answer them, in my view, we should not stay.”

War games. The U.S. Air Force could stop a Chinese invasion of Taiwan, the service learned in a classified war game late last year—but not with today’s gadgets. Commanders in the game, reported by Defense News, needed a sixth-generation fighter jet, cargo planes able to drop guided bombs, and drones as a sensing grid to stop China—a possible preview of what the service might be asking for in future budget requests from Congress.

NEW FOR SUBSCRIBERS: Want to read more on this topic or region? Click + to receive email alerts when new stories are published on Military, Afghanistan