After the U.S. withdraws from Afghanistan, its rivalry with China is likely to define the new administration’s approach to the region.

The highlights this week: The Biden administration’s South Asia policy could shift after its withdrawal from Afghanistan, extremists stage violent protests in Pakistan, and Washington and New Delhi spar over a U.S. naval ship maneuver.

The highlights this week: The Biden administration’s South Asia policy could shift after its withdrawal from Afghanistan, extremists stage violent protests in Pakistan, and Washington and New Delhi spar over a U.S. naval ship maneuver.

The Biden administration’s announcement this week that it will withdraw all U.S. troops from Afghanistan by Sept. 11 has significant implications for the sputtering Afghan peace process. The Taliban’s own perceived victory could embolden them in future talks, as FP’s Elise Labott writes. And the next five months before the completion of the withdrawal will be critical, as I argue in Foreign Policy.

The Afghanistan withdrawal also holds implications for U.S. policy in South Asia more broadly. Washington has long viewed the region through the lens of the conflict in Afghanistan. With U.S. forces on their way out, soon a new frame of reference will likely dominate U.S. thinking on South Asia: China, and specifically the U.S.-China rivalry.

For several decades, the United States has not developed a truly regional policy for South Asia. Instead, it approaches the region through a few silos: the war in Afghanistan, the relationship with Pakistan (in turn shaped by Afghanistan), and the U.S.-India partnership. Other South Asian states have not figured prominently in U.S. strategic thinking. When then-President Donald Trump unveiled a “Strategy in Afghanistan and South Asia” in 2017, Afghanistan, India, and Pakistan were the only countries mentioned.

This geographically limited approach to South Asia is misguided, given the region’s strategic significance. It holds one-quarter of the world’s population and sits astride the Indian Ocean region—an area whose map Robert D. Kaplan predicts may be as “iconic” to the 21st century as Europe’s was to the 20th. South Asia is also particularly vulnerable to threats such as natural resource stress and climate change that will define the coming decades.

During its first months in office, the Biden administration has continued the silo approach. It has closely focused on Afghanistan, enlisted Pakistan’s support in the Afghan peace process, and moved to deepen its partnership with India. The United States has largely ignored the rest of the region, although climate czar John Kerry did make a visit to Bangladesh.

However, the coming U.S. exit from Afghanistan means that China, arguably the Biden administration’s biggest foreign-policy priority, will soon take center stage in U.S. strategic calculations about South Asia. Early signs, from the public spat with Chinese officials in Alaska to major overtures to Taiwan, suggest that Biden will take a hard line on Beijing. Expect him to approach South Asia through the lens of U.S.-China rivalry.

India, which Washington sees as its best bet in South Asia to counterbalance Beijing, will remain a top priority for U.S. policy. But Pakistan, a major Chinese ally, will likely be left on the outside looking in—despite recent pitches from Islamabad for a more multifaceted relationship with Washington that goes beyond security.

On the other hand, the U.S.-China rivalry could finally prompt the United States to apply a broader geographic frame to its policy in South Asia. China’s deepening footprint in the region, fueled by the expansion of its Belt and Road Initiative, means that smaller South Asian states will increasingly appear on the U.S. strategic radar.

Additionally, the U.S. Indo-Pacific strategy, a Trump administration initiative focused on countering China that the Biden administration appears likely to retain, calls for scaling up both security and non-security cooperation with Bangladesh, Bhutan, the Maldives, Nepal, and Sri Lanka. Infrastructure development tools associated with the Indo-Pacific region, including the new Development Finance Corporation and the Blue Dot Network, could also be deployed to compete with the Belt and Road.

A truly regional U.S. strategy in South Asia wouldn’t necessarily be problem-free. Countries across South Asia are experiencing democratic backsliding. The Biden administration, which has made democracy promotion a pillar of its foreign policy, could spark tensions by criticizing problem states—especially Bangladesh and Sri Lanka—for their democracy and human rights troubles.

Overall, the U.S. withdrawal from Afghanistan gives Washington the opportunity to engage more broadly across a region that as a whole is significant for U.S. interests. Motivated by its intensifying rivalry with China, the Biden administration is especially likely to pursue deeper ties with some of the smaller states of South Asia—countries often given short shrift in U.S. policy calculations.

April 22-23: The Biden administration hosts a virtual climate summit with 40 world leaders, including the prime ministers of Bangladesh, Bhutan, and India.

April 24-May 4: Turkey hosts a 10-day Afghanistan peace conference in Istanbul, with an aim to jump-start a possible political settlement. 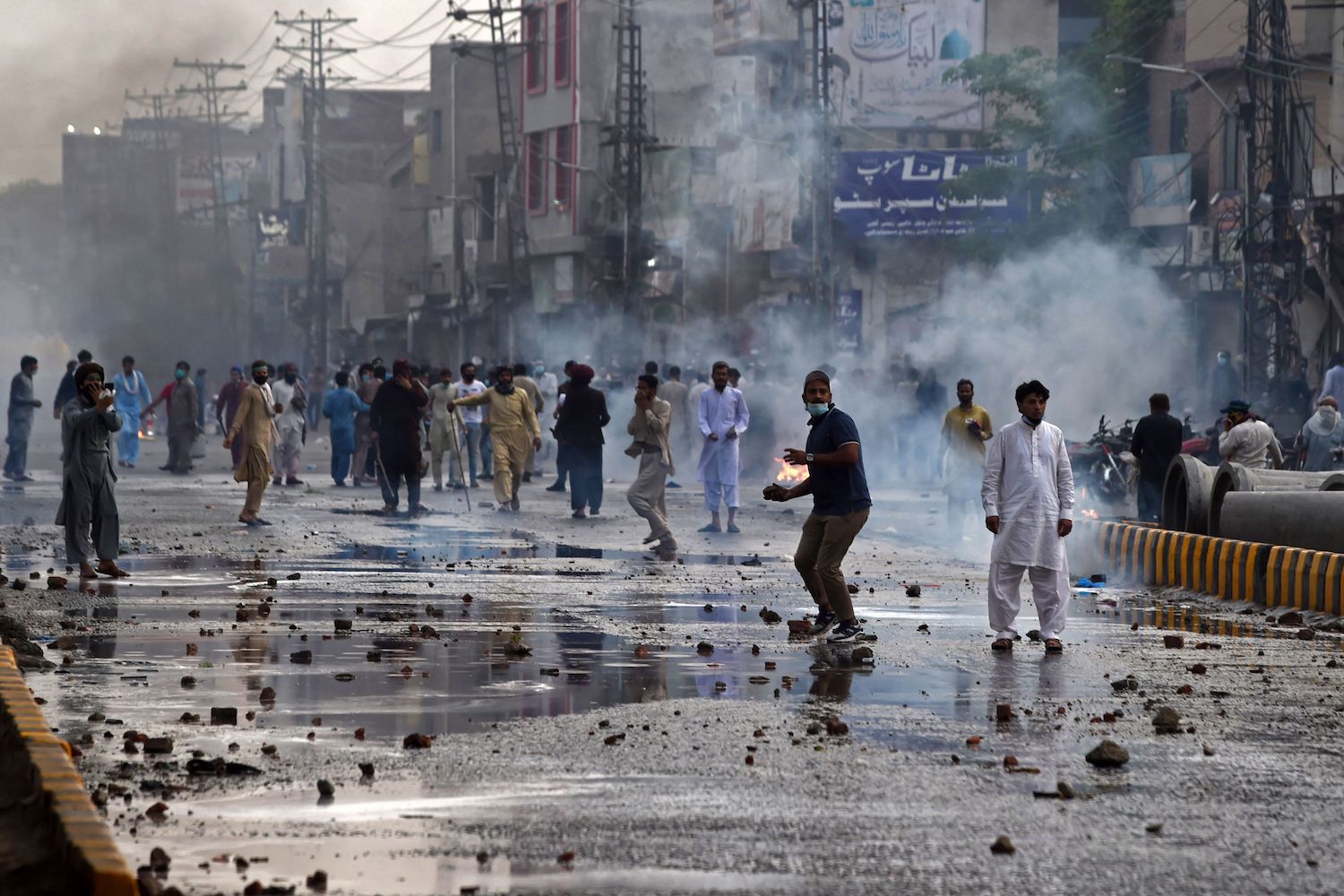 A Tehreek-e-Labbaik Pakistan supporter prepares to throw a stone towards police during a protest in Lahore, Pakistan, on April 12.ARIF ALI/AFP via Getty Images

In February, Pakistani officials agreed to put before parliament a TLP demand to expel the French ambassador after remarks by French President Emmanuel Macron that the TLP deemed Islamophobic. The deadline for the demand to be implemented is April 20, and the TLP has vowed major demonstrations if it isn’t met. On Thursday, the French Embassy in Pakistan urged its citizens there to leave the country temporarily, citing “serious threats to French interests.”

Pakistan has long treated the TLP, which aggressively defends Pakistan’s blasphemy laws and rails against religious minorities, with kid gloves. That changed on Wednesday, when the government announced it will ban the group. But Pakistan has often banned extremist groups only to have them reemerge under new names. The TLP, which has substantial support among religious conservatives, is unlikely to go away.

Naval controversy. On April 7, the U.S. Navy 7th Fleet issued a press release stating that one of its vessels had transited India’s exclusive economic zone, asserting that the maneuver—without India’s advance consent—was within international law. The statement provoked anger in India, which insists that such maneuvers do require prior permission.

The press release was more significant than the incident itself. The U.S. Navy often stages such maneuvers, and numerous countries—rivals and allies alike—have objected to them in the past. But the incidents are typically tabulated quietly in U.S. government reports long after they have passed, without much notice.

Why the change? It could be a bureaucratic tweak that calls for new reporting processes. Or the Biden administration could want to telegraph an indirect conciliatory message to China and other rivals that these operations don’t just target them. Either way, the incident won’t soil U.S-India relations, but it underscores how a superpower’s behavior can rankle even its closest partners.

Rising second wave. The number of new coronavirus cases continues to climb in South Asia, and especially in India, which marked a grim milestone on Monday as it surpassed Brazil to become the second-hardest-hit country, after the United States. India’s vaccine campaign did receive a shot in the arm on Monday, when it approved the use of Russia’s Sputnik V, which will supplement India’s two domestically produced vaccines. A perfect storm of rapidly rising new cases, vaccine struggles, and crowded events suggests more hardships ahead.

Wednesday was the deadliest day for Pakistan of its current surge. Last month, in an effort to ease vaccine shortages, Islamabad decided to allow the private sector to buy and sell shots. More vaccines have become available, but the move has amplified Pakistan’s inequalities. Most shots obtained from private markets are in cities, and poor rural residents can’t access them.

Meera Srinivasan, the Hindu’s Colombo correspondent, published a sobering dispatch this week about the tens of thousands of Sri Lankan women experiencing severe debt due to their reliance on high-interest microfinance loans. Many women have fallen into a crushing cycle: paying sky-high rates—up to 200 percent—after being harassed by collections agents, only to obtain more loans to cover their losses. These stories are jarring, given that microcredit has so often been depicted as a ticket out of poverty for South Asian women.

“The Americans are responsible for the troubles, hardships that we are going through. Now they are going to leave with their troops, with no peace, no progress. They just want to leave their war behind.”

A Pakistan Today editorial argues that the U.S. exit from Afghanistan is reminiscent of the Soviet withdrawal: “It is difficult to avoid a sense of seeing yet another abandonment of Afghanistan by a superpower.” It raises concerns that its neighbor could go the way of Iraq, which saw the emergence of the Islamic State after the withdrawal of U.S. forces. The editorial contends that regional powers should help salvage the Afghan peace process.

Meanwhile, a Times of India editorial describes the withdrawal as a “tricky situation,” calling on India “to get its ducks in a row.” It argues that New Delhi, which has engaged little with the Taliban, should reach out to moderate factions of the group—a move that could help counter Pakistan’s influence over the Taliban and in Afghanistan on the whole.