Biden’s Back Channel on the Amazon

The highlights this week: Why Brazilian environmentalists are criticizing U.S. engagement with Brazil on the Amazon, a new Spanish-language streaming giant is created to battle Netflix, and Haiti’s prime minister resigns.

The highlights this week: Why Brazilian environmentalists are criticizing U.S. engagement with Brazil on the Amazon, a new Spanish-language streaming giant is created to battle Netflix, and Haiti’s prime minister resigns.

At U.S. President Joe Biden’s upcoming virtual climate summit on April 22 and 23, the United States had hoped to be able to announce progress from over a month of private talks with the Brazilian government on protecting the Amazon rainforest. After President Jair Bolsonaro took office in January 2019, satellites detected that destruction of the Amazon rose 34 percent that year compared with the previous one. Over 9 percent more of the forest was chopped or burned down in 2020.

When Biden suggested in a presidential debate last year that Brazil could face economic consequences for failing to control deforestation, Bolsonaro lashed out. Now that Biden is in office, his envoys have thus tried a more cordial, low-profile approach consisting of weeks of meetings with Brazilian Environment Minister Ricardo Salles.

The talks yielded an impasse and fierce criticism from Brazilian environmental and Indigenous groups, which were not included.

In response to the deadlock, on Sunday U.S. Ambassador to Brazil Todd Chapman reportedly took a firmer line and told a group of Brazilian politicians, businesspeople, and diplomats that Brasília had until next week’s summit to demonstrate a commitment to addressing the issue or it would face consequences in bilateral trade agreements and U.S. support for Brazil’s entrance into the Organization for Economic Cooperation and Development.

In a dramatic change in tone on Wednesday, Bolsonaro sent a seven-page letter to Biden promising that Brazil would end all illegal deforestation by 2030 and would not demand U.S. funding as a precondition for doing so. On paper, this was nearer to the kind of pledge that Washington sought, but Brasília’s recent obstinance still casts doubt on its credibility. The same day, Bolsonaro’s government published its goal for reducing deforestation by the end of 2022—which would bring it to a level 16 percent higher than the year before Bolsonaro took office.

The hang-up. For weeks, Salles, Bolsonaro’s environment minister, had dug in his heels over a Brazilian demand for $1 billion from the United States in order to commit to reducing deforestation. He told Estadão that with the funds, Brazil could cut deforestation by 30 to 40 percent over the course of a year.

Washington insisted it needed proof of progress this year before contributing money, given the Bolsonaro administration’s record of defunding Brazil’s environmental protection agency, dismantling safeguards for Indigenous groups, and encouraging commercial development of the Amazon.

The impasse over commitments is understood to be a factor in top White House advisor Juan Gonzalez’s skipping of Brazil in a three-country tour of South America this week.

Front-line defenders speak out. Meanwhile, in an open letter to Biden last week, more than 200 Indigenous, environmental, and civil society groups warned the U.S. president not to trust Bolsonaro’s environmental commitments without seeing proof of action and called to be included in any negotiations. Many Indigenous Brazilians are residents of protected areas of the rainforest and know firsthand which enforcement measures are effective.

On Monday, Chapman, the U.S. ambassador, met with a small group of Indigenous Brazilians about the issue, and Bolsonaro’s Wednesday letter included a promise to dialogue with Indigenous groups. And on Tuesday, a group of young environmentalists backed by eight former environment ministers sued the federal government in the São Paulo state court for reducing its carbon-cutting ambitions in its updated Paris Agreement commitments.

Attempts at paradiplomacy. Just as they did during the race to procure vaccines, Brazilian governors are organizing to conduct their own diplomacy on environmental issues. At least 22 of Brazil’s 26 governors are preparing their own letter to Biden, which in its current form suggests cooperating on Amazon reforestation, recuperating other Brazilian biomes for carbon capture, and developing other pathways to a greener economy.

Brazil’s private sector, too, has scrambled to act: Members of Brazil’s agribusiness and financial sectors wrote the federal government last week, saying that its signaling “makes the country less attractive for international investments.”

April 22: Escazú Agreement on environmental consultation and access to information in Latin America comes into effect.

In Bolivia, the ruling Movement for Socialism lost all four of its gubernatorial runoff races to challengers who included leaders from rural communities and an economist, consistent with a national trend of its opposition on the right and moderate left gaining ground.

Guatemala blocks a judge. Guatemala’s Congress blocked judge Gloria Porras, known for her work against corruption, from assuming her role as chief justice of the country’s Constitutional Court on Wednesday, earning rebukes from a top U.S. State Department official among others.

Fake engagement in Honduras. Facebook failed to remove artificial likes on posts by Honduran President Juan Orlando Hernández for almost a year after the platform was alerted to them by an internal content monitor, the Guardian reported. The monitor was encouraged by a supervisor to prioritize fake information campaigns in the United States and Western Europe or those carried out by Russia and Iran.

A new Spanish-language media giant. Mexico’s Televisa and the U.S.-based Univision announced plans for a $4.8 billion merger in hopes of dominating global Spanish-language television and streaming. At their heels is Netflix; the streaming giant recently moved its Latin America headquarters to Mexico City and has produced highly popular shows such as The House of Flowers, which earned the nickname “the millennial telenovela.”

Televisa, too, has ventured into modernizing its soap opera fare with shows such as Together, The Heart Is Never Wrong, the first Mexican telenovela with two gay characters as protagonists (best known by the combination of their names, Aristemo). Televisa and Univision say that of the around 600 million Spanish speakers in the world, only 10 percent currently use online video services, compared with 70 percent of English speakers.

Peru’s Pedro Castillo, the leftist candidate who will advance to the presidential runoff, amassed word-of-mouth support across the nation’s countryside in part through networks linked to teachers’ unions and rondas campesinas, or the rural self-defense groups whose members are called ronderos.

Which of the following is not true about Peru’s ronderos or rondas campesinas?

A) They have a history of fighting the Shining Path terrorist group.
B) They helped enforce quarantine during the COVID-19 pandemic.
C) Some of their actions have been questioned by human rights advocates.
D) Their authority comes from informal agreements rather than Peruvian law.

In Focus: Haiti’s ‘Descent Into Hell’

Haitian Prime Minister Joseph Jouthe resigned Wednesday amid a political crisis that the Catholic archdiocese of Port-au-Prince described as a “descent into hell.” A string of kidnappings in the country now includes, as of Sunday, the abduction of seven clergy members and three other people on their way to church.

“The public authorities who are doing nothing to resolve this crisis are not immune from suspicion,” the church wrote. It and several private sector employers’ federations closed their offices Thursday in protest.

President Jovenel Moise tweeted that Jouthe’s resignation would make it possible to address insecurity, suggesting Jouthe had been ineffective in stopping the recent violence. His replacement is Claude Joseph, who had been serving as foreign minister. Moise himself has been under widespread social pressure to resign for months.

International arbiters. On Tuesday, for the first time, the U.N. office in Haiti voiced concerns over Moise’s preparations to hold a constitutional referendum in June, saying that the process was “not sufficiently inclusive, participatory, or transparent.” It had previously supported the measure.

The same day, the Organization of American States issued a statement calling on the government to protect Haitians from violence. International arbiters have long been heavily influential in Haiti’s political fate. That includes Washington’s current decision to support Moise in a dispute over when his presidential term ends.

COVID unchecked. COVID-19 vaccination is yet to begin in Haiti, which awaits its first vaccines from the World Health Organization’s COVAX alliance. Vaccine hesitancy in the country is high, and a U.N. official said the violence in the country was contributing to lack of trust in the health system. 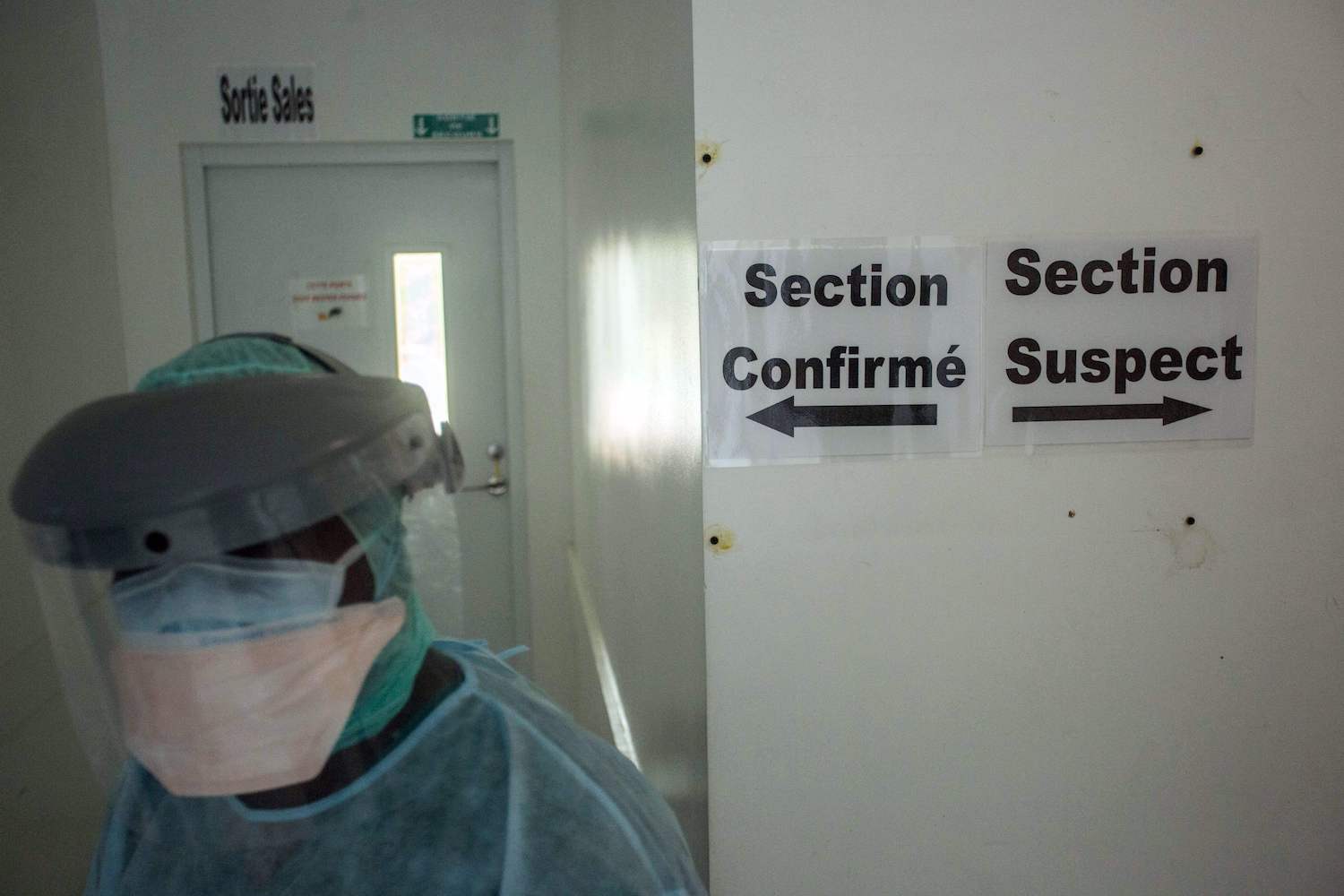 A doctor walks in the corridors of the Doctors Without Borders Drouillard Hospital in Cité Soleil, Haiti, on June 3, 2020.Pierre Michel Jean/AFP/Getty Images

D) Their authority comes from informal agreements rather than Peruvian law.

Former Peruvian President Alberto Fujimori granted legal recognition to the ronderos in the 1990s as part of enlisting them in his campaigns against leftist guerrillas in the countryside. Today, they retain that recognition, although some of their actions have been criticized as arbitrary. Some COVID-19 quarantine flouters in the regions of Puno and Cajamarca, for example, could earn whippings from ronderos, local leaders of the groups told Reuters.

NEW FOR SUBSCRIBERS: Want to read more on this topic or region? Click + to receive email alerts when new stories are published on Foreign & Public Diplomacy, Climate Change

In Brazil, Vaccine Diplomacy Can Help Save the Climate

Washington should bypass Bolsonaro and open a direct dialogue on Amazon deforestation with local leaders in regions hit hard by COVID-19.