Underfunding and India’s export restrictions mean some African citizens may have to wait until 2023 to get their shot.

Africa Is Losing the Vaccine Race

Africa has lagged behind in the race to acquire coronavirus vaccines since it began. It was clear individual governments would not be able to compete against wealthier nations purchasing limited stocks, so a collective effort quickly got underway. When the first doses arrived in Ghana, the Ivory Coast, Kenya, and Rwanda in late February and early March, it seemed like the continent’s rollout had finally gotten off the ground. However, efforts are stumbling in the face of systemic obstacles to distribution. Now, India’s surging third wave could also directly affect the continent’s access to vaccines.

Africa has gotten most of its vaccine doses through the COVID-19 Vaccines Global Access (COVAX) initiative, backed by the World Health Organization, the European Commission, and Gavi, the Vaccine Alliance, which pools donor funding to allow developing countries to acquire shots—primarily AstraZeneca, which doesn’t require below-freezing storage. COVAX now needs an additional $2 billion to continue its work.

But even that might not be enough if there are no shots to be found. The initiative has depended on the private Serum Institute of India, the world’s largest vaccine producer, for its supply. But grappling with soaring cases, India has halted vaccine exports and disrupted COVAX’s efforts in 36 African countries.

Last week, John Nkengasong, the director of the Africa Centres for Disease Control and Prevention, called on India to lift its export restrictions. “If you finish vaccinating your people before Africa or other parts of the world, you have not done yourself any justice because variants will emerge and undermine your own vaccination efforts,” he said.

Stalled rollouts. With COVAX’s efforts undermined, it’s now unclear when the next batch of vaccines will arrive on the continent. The COVID-19 African Vaccine Acquisition Task Team, created by African Union heads of state, has raised money to acquire purchases of doses separately, but its efforts are also stalled by global shortages.

In the meantime, Rwanda and Ghana have nearly exhausted their vaccine supplies, their otherwise efficient rollout strategies hampered by shortages. Many people who received their first shot through COVAX have no idea when the second will arrive, and there are fears the wait could weaken the vaccine’s efficacy. In Malawi and South Sudan, where rollouts were already challenged by weak public health infrastructure, AstraZeneca doses have expired and will have to be destroyed.

Scaling up local vaccine production could help solve distribution issues, but U.S. and European pharmaceutical companies are still closely guarding patent rights to the COVID-19 vaccines. Even as Nkengasong made the case for urgently setting up local manufacturing at a conference on April 12, he conceded that some African states may have to wait until 2023 until they are able to access the vaccine.

Going it alone. South Africa—which has seen the highest number of infections in Africa, at more than 1.5 million cases—has also had its vaccine rollout disrupted by forces beyond its control. As a middle-income country, it can’t make full use of COVAX’s tiered distribution system and is now trying to punch above its weight in the fight for shots. South Africa paid for more than 1 million AstraZeneca doses, but they proved less effective against the variant first identified in the country. In February, it pivoted to Johnson & Johnson’s single-shot vaccine instead, planning to rely on a local production facility contracted to make it.

After vaccinating nearly 290,000 health care workers, South Africa halted the rollout after six people in the United States developed rare blood clots after receiving Johnson & Johnson shots. South African Health Minister Zwelini Mkhize revealed big pharmaceutical companies were subjecting the country to unreasonable demands. “We have found ourselves in the precarious position of having to choose between saving our citizens’ lives and risking putting the country’s assets into private hands,” he told parliament last week.

Compared to other regions, Africa seems to have been spared the worst of the coronavirus pandemic, but the emergence of new variants shows no one is protected until everyone is. Scientists warn the longer it takes to inoculate a population, the more resistant COVID-19 could be to vaccines when they eventually arrive.

April 26: The U.N. Security Council discusses its mission in Sudan and South Sudan.

Chad under siege. Chad President Idriss Déby has been killed in fighting between rebels and government soldiers, according to a military statement that came just a day after the country’s election commission declared his inevitable victory in a disputed election. On Tuesday, the military announced the 68-year-old had succumbed to injuries “on the battlefield.” His son, Gen. Mahamat Kaka, will become interim leader of a country now facing the twin crises of an illegitimate election and a rebel uprising.

After the polls closed last Sunday, rebels began to advance on Chad’s capital, N’Djamena, with the aim of liberating the country from its long-time leader. The Front for Change and Concord in Chad (FACT) launched the attack from neighboring Libya, while the Chadian government and international observers were focused on dissent surrounding the April 11 election, which was prefaced by an opposition boycott and a crackdown against civilian demonstrators.

A FACT spokesperson said its fighters have captured Kanem province, northwest of the capital—a claim the government denied even as Chad troops met rebels on the front lines. Officials said Déby himself skipped his presidential victory speech to take charge in battle. Even after his death, the fighting is set to continue. The military has imposed a curfew amid fears that rebels could reach N’Djamena.

Déby, in power since 1990, faced growing discontent from civil society and opposition parties, turmoil that perhaps gave the rebels an opportunity. The circumstances of his death and his decision to go to the front lines remain unclear. But Déby was a consummate military man and an iron-fisted leader who centralized power and hollowed out his country’s political institutions. His sudden absence is likely to plunge Chad into further crisis. 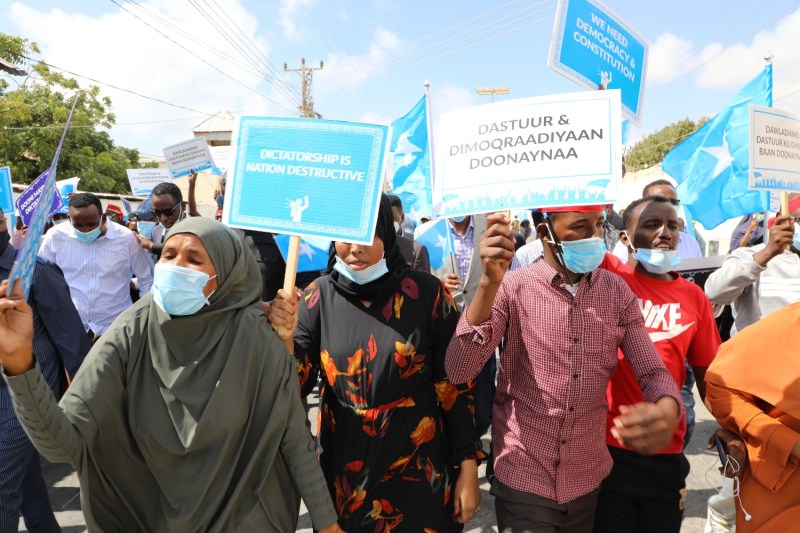 Somalia’s president extends power. Embattled Somali President Mohamed Abdullahi Mohamed—widely known by the nickname Farmajo—has passed a law that would extend his term by two years, cloaked as a measure that would finally give Somalis a direct vote. Farmajo’s term should have ended in February, but a disagreement over voting regulations led to a delayed election and political crisis. Farmajo pushed the law through the lower house, bypassing the senate.

The law paves the way for direct elections in two years, leaving power in Farmajo’s hands during that time. Somali and foreign observers have warned the move could threaten the country’s fragile stability. U.S. Secretary of State Antony Blinken said the United States was “deeply disappointed” by Somalia’s new law.

Cameroon’s LGBTQ crackdown. A Human Rights Watch report warns of a “new upsurge in anti-LGBT persecution” by Cameroon’s security forces. The crackdown has intensified in recent months with the government arresting 24 people since February, including a high-profile transgender social media star, Loic Njeukam. Njeukam, known as Shakiro, goes on trial next week for “attempted homosexuality.”

Acts deemed homosexual are illegal in Cameroon, carrying a potential jail term of five years in prison and giving security forces the leeway to abuse the law. In the last two years, Cameroon’s police have carried out mass arrests of LGBTQ people and subjected detainees to humiliating mistreatment, according to Human Rights Watch.

More than 14.7 million doses of the COVID-19 vaccine have been administered across the continent, but rollout campaigns have stalled in many countries.

A futuristic city in a crumbling democracy. Senegalese American musician Akon arrived in Uganda last week carrying plans for the development of a futurist city there. After landing in Kampala, he traveled to Ugandan President Yoweri Museveni’s rural home, where he presented his blueprints for hospitals, shopping malls, and recreational facilities. (Akon is planning a similar development in Senegal.) The Ugandan government has given one square mile of empty land to the project.

But where Akon sees a business opportunity, human rights groups see a celebrity “whitewashing” the wave of repression Uganda has experienced since Museveni was reelected in January. Museveni’s regime has cracked down with brutal force against supporters of the main opposition candidate, musician-turned-politician Bobi Wine.

When asked about Museveni’s leadership record, Akon has dismissed criticism, telling the Ugandan press, “Honestly, that just don’t bother me. Clearly democracy just works differently in different places, and not every place in the world is made for democracy.”

Michel Foucault’s crimes in Tunisia. In Al Jazeera, Tunisian academic Haythem Guesmi examines recent reports that French philosopher Michel Foucault sexually abused boys while living in Tunisia in the late 1960s, after a friend came forward to the Sunday Times. Guesmi wrestles with what it means to accuse one of the world’s foremost thinkers on power and sexuality in a country where victims may be seen as disposable.

NEW FOR SUBSCRIBERS: Want to read more on this topic or region? Click + to receive email alerts when new stories are published on Health, Pandemics, Africa