The Pentagon is going to need more firepower to pull out U.S. troops.

Welcome to Foreign Policy’s Security Brief, and we hope everyone is having a better week than the minds behind the Super League.

The highlights this week: The Pentagon wants more firepower to get U.S. troops out of Afghanistan, Biden continues to break the glass ceiling with national security picks, and why Russia and China are becoming the best of frenemies.

Welcome to Foreign Policy’s Security Brief, and we hope everyone is having a better week than the minds behind the Super League.

The highlights this week: The Pentagon wants more firepower to get U.S. troops out of Afghanistan, Biden continues to break the glass ceiling with national security picks, and why Russia and China are becoming the best of frenemies.

OK, we’re not breaking any news here: The United States is leaving Afghanistan. But as the Biden administration looks to begin the drawdown at the start of May—in just over a week—U.S. and NATO allies still have plenty of decisions to make about how to get their troops out safely, especially as the Taliban have promised renewed attacks on the roughly 3,500 American service members leaving the country.

Here’s one sign of how complex the drawdown could be: Heading to Secretary of Defense Lloyd Austin’s desk is a memo from U.S. Central Command chief Gen. Kenneth McKenzie, the top military leader in the region, requesting an aircraft carrier deployment to the region as American forces exit, the New York Times reported on Wednesday. The request, which includes 24-hour support from the carrier air wing, is a sign that the United States is bracing for the Taliban to harass U.S. forces as they exit—with no cease-fire agreed to ahead of the drawdown. The United States could also send additional personnel to help with logistical and security support to aid in the withdrawal, as Politico reported.

But the decision to leave doesn’t mean that the fight is over about what the U.S. counterterrorism role will be going forward. McKenzie, who is in Washington briefing lawmakers this week, said the United States is still looking at “offshore, over-the-horizon options” to influence the battlefield in Afghanistan, including intelligence assets based nearby. U.S. officials and diplomats are also in talks with nearby nations about potential basing agreements for U.S. airpower, McKenzie said.

One thing that’s becoming increasingly clear, as we wrote here last week, is that the U.S. aid spigot to Afghanistan isn’t closing any time soon. Secretary of State Antony Blinken said yesterday that the Biden administration is coordinating with Congress to add around $300 million in civilian aid to Afghanistan as soon as possible. Under the Trump administration, that money had previously been held on condition of progress in peace talks.

Human Rights Watch. A leading progressive foreign-policy expert, Sarah Margon, is likely to be named as President Joe Biden’s pick for a top human rights post at the State Department, as we scooped on Wednesday.

An empty seat. The Biden White House dropped plans to name Matthew Rojansky, a prominent Russia expert and director of the Wilson Center’s Kennan Institute, as the new director for Russia at the National Security Council, several people familiar with the matter confirmed to Security Brief. Russia hawks criticized Rojansky’s views as too conciliatory toward Russia and not supportive enough of Ukraine. One administration insider rebuked these criticisms as misguided and said Rojansky faced a mini-campaign of “character assassination” from people who disagreed with him on policy grounds.

China hawk. In a long-expected move, Biden has tapped Ely Ratner, a former aide during the Obama administration, to be the assistant secretary of defense for Indo-Pacific security affairs—the Pentagon’s top Asia official.

Monday, April 26: The 35th anniversary of the Chernobyl nuclear disaster.

Wednesday, April 28: President Joe Biden addresses a joint session of Congress on the eve of his 100th day in office.

Saturday, May 1: U.S. troops are set to start leaving Afghanistan, just one day before the 10-year anniversary of the U.S. raid that killed Osama bin Laden.

Declaring a genocide. Biden is expected to declare that the Ottoman Empire’s killing of 1.5 million Armenians in the early 20th century constituted a genocide, as the New York Times reports. The move is diplomatically significant, as Biden would be the first U.S. president since Ronald Reagan to acknowledge the killing campaign as genocide, and the Turkish government has steadfastly rejected that the atrocities committed during World War I amount to genocide. The expected declaration will likely prompt sharp backlash from Ankara and further erode already tense relations between the United States and Turkey. 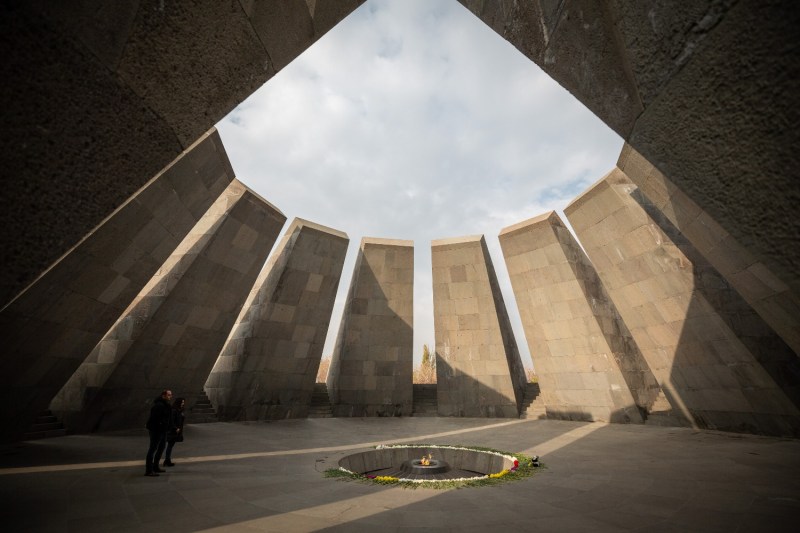 Tourists take a selfie next to Tsitsernakaberd, the Armenian genocide memorial complex, in Yerevan, Armenia, on Nov. 16, 2018.

Best frenemies. Russia and China have been drawing closer in an alignment that has worried defense planners, as the United States has shifted in recent years to focus on fighting one conflict at a time. Jack and FP’s Amy Mackinnon do the deep dive on the relationship between the two countries that share defense technology and many foreign-policy goals.

High-tech pals. Biden’s national security advisor, Jake Sullivan, has taken to Twitter to praise the European Union’s plans to more strictly regulate artificial intelligence. The tweet seems to signal the Biden administration is also eyeing plans to regulate cutting-edge tech that will impact surveillance, privacy, and human rights (even if adversaries like China show no interest in following suit).

Another kind of arms race. As U.S. officials and their Asian allies fret over what to do about North Korea’s nuclear ambitions, there’s a growing but quiet conventional arms race brewing between South Korea and North Korea. The conventional military build-up is meant to strengthen deterrence against Pyongyang, but it could also raise the stakes on any potential confrontation with the West.

Scott McMillion was named as the first ever chief diversity officer for the FBI.

Jacob Stokes has joined the Center for a New American Security, a Washington-based think tank, as a fellow in the Indo-Pacific program. Stokes previously worked at the Obama White House on then-Vice President Biden’s national security staff.

“The first time Putin gave a state-of-the-nation speech, the No. 1 song was ‘Angel’ by Shaggy.”

—Some perspective on how long the Russian president has been in power as he gave his famous annual speech to the country this week, courtesy Mark MacKinnon, senior international correspondent for the Globe and Mail.

Don’t call them “warriors.” Instead, call U.S. troops “citizen-soldiers,” historian Bret Devereaux writes in a Foreign Policy argument this week. The Pentagon’s fixation on the term “warrior” has helped shape U.S. troops serving in forever wars as a class apart, an increasing problem as the civil-military relationship has become increasingly strained.

Correction, April 22, 2021: This article was corrected to note that Biden administration is looking to release $300 million in U.S. aid for Afghanistan as soon as possible.

NEW FOR SUBSCRIBERS: Want to read more on this topic or region? Click + to receive email alerts when new stories are published on United States, Afghanistan