The highlights this week: India buckles under the weight of the world’s worst coronavirus surge, Pakistan makes another deal with religious hard-liners, and a new report highlights worsening press freedoms across the region.

The highlights this week: India buckles under the weight of the world’s worst coronavirus surge, Pakistan makes another deal with religious hard-liners, and a new report highlights worsening press freedoms across the region.

India is now the epicenter of the coronavirus pandemic. Just weeks ago, it was registering around 50,000 new daily cases. On Thursday, the country registered nearly 315,000 new cases in a 24-hour period—a new pandemic world record. India’s COVID-19 curve has nearly become a vertical line. Thursday was also India’s deadliest day yet, and concerns about underreporting mean the toll may be higher. A new Lancet study warns that if the situation in India fails to improve, it could suffer 2,300 daily deaths by June.

Critics have in part faulted New Delhi for its imperious handling of the current crisis, which appears driven by the spread of a new variant. The government was slow to respond, even though it knew a ferocious second wave was possible by late last year. As Kunal Purohit writes in Foreign Policy, “India is hurtling toward a public health emergency.”

The public health situation is already dire: India is collapsing under the weight of disease and death. Hospitals are dangerously low on oxygen, and patients are sharing beds. In Gujarat, Prime Minister Narendra Modi’s home state, crematorium furnaces are melting from overuse. And although India launched a mass vaccination campaign in January, it now faces major shortages, in part because it exported millions of vaccines abroad earlier this year.

When the pandemic first hit India last year, New Delhi acted quickly and declared a nationwide lockdown, and its initial wave was relatively modest. During its initial peak in September, new daily cases never exceeded 100,000. India appeared close to defeating the virus as recently as February, making its current spike all the more surprising. That month, India recorded an average of 11,000 new cases daily. In March, India’s health minister declared that that it was in the “endgame” of the pandemic.

So what went wrong? Experts cite the spread of the U.K. variant and frequent large events with unmasked crowds. State election rallies have gone ahead, and a Hindu festival drew millions of people to the Ganges River this month—leading to more than 1,000 new cases. But the emergence of a more contagious Indian strain seems to be the biggest factor. In March, a government statement warned of new variants that “confer immune escape and increased infectivity.” In fact, the Indian strain may have been circulating as early as October.

Shamika Ravi, a nonresident senior fellow at the Brookings Institution, told Foreign Policy that both the new strain and the increasing number of people leaving their homes explain the current surge. She said the high mobility rate may also indicate why more young people are getting infected in the current wave: They are the ones exposing themselves by leaving their homes for work and leisure. Mobility rates for older people have been lower during the pandemic.

The recent spike doesn’t necessarily suggest the government’s earlier pandemic response was ineffective, according to Ravi. In previous months, new cases and deaths had declined, and hospitals and crematoriums weren’t overflowing as they are now. The second wave is a “new beast, given the speed, magnitude, and virus strain,” she said.

Nearly 20 million Indians have been fully vaccinated, but in a country of more than 1 billion, that barely includes 1 percent of the population. Although New Delhi has announced that on May 1 anyone over the age of 18 will be eligible, shortages could limit the benefits of this expansion. On Tuesday, Modi addressed the nation, vowing to increase oxygen and other critical supplies, but his speech offered few specifics about a broader plan. Meanwhile, ruling party leaders have mocked the opposition’s offers of cooperation, boasted about the crowds at state election rallies, and berated journalists raising concerns about the crisis.

Without critically needed supplies, Indian vaccine production lines could grind to a halt in weeks. The government hopes that the United States will ease export controls on raw materials for vaccines so that India can ramp up production, as articulated in an appeal by the head of India’s top vaccine manufacturer. The Biden administration suggests it’s sympathetic but not yet ready.

India’s coronavirus crisis has international implications, too. Indian travelers have brought the virus to places with low infection rates, such as Hong Kong, and the government’s vaccine export reductions have left intended recipients in the lurch, including many developing countries relying on the COVID-19 Vaccines Global Access initiative.

The rate of new cases shows no sign of slowing down. Ominously, scientists fear that another variant detected this week in West Bengal could eventually become India’s most infectious strain yet. Although some states have announced brief curfews, Modi has declared that lockdowns should only be a last resort. With India still struggling to tame the beast, its pandemic nightmare isn’t likely to end anytime soon.

Thursday, April 29: The Wilson Center hosts a virtual launch of Pakistani journalist Zahid Hussain’s new book on how the war in Afghanistan has shaped U.S.-Pakistan relations.

Protests called off in Pakistan. The hard-line Islamist political party Tehreek-e-Labbaik Pakistan (TLP) has announced that it will end protests that have killed four police officers and wounded more than 800 people since last week. The move came after the government agreed to one of the TLP’s core demands: bringing a resolution to parliament to expel the French ambassador, after October 2020 remarks by French President Emmanuel Macron that were seen as Islamophobic.

The government also agreed to remove all criminal cases registered against the TLP during the protests, though the group remains banned. Islamabad’s concessions are unsurprising, as the state often appeases religious hard-liners. More striking is the Pakistani military’s absence. Heavily involved in Pakistani politics, the armed forces have previously participated in negotiations with the TLP. Its silence may signify its unhappiness with the government and an unwillingness to assist it at a difficult moment.

White House climate summit. After a last-minute invitation to Islamabad, four South Asian countries—Bangladesh, Bhutan, India, and Pakistan—are participating in this week’s White House climate summit. The region certainly deserves a seat at the table, as it’s one of the most climate-vulnerable areas. South Asia’s large, densely populated urban spaces—many located in coastal regions—particularly underscore the risks: Over the last decade, nearly half of South Asia’s population has been affected by at least one climate-related disaster.

As I wrote last week, the United States will soon reorient its policy in South Asia. While its rivalry with China will drive future thinking, climate change is likely to be another area of focus. It poses a threat to Washington’s top interest in the region: stability.

Declining press freedoms. Reporters Without Borders has released its 2021 World Press Freedom Index, and the rankings paint a dismal picture for South Asia. Every country in the region except Bhutan (65) and the Maldives (72) falls in the lower half of the index. Bangladesh has the region’s worst ranking (152), and India (142) and Pakistan (145) aren’t far ahead. Only Bhutan, the Maldives, and Nepal have improved their rankings from 2020.

Press freedoms in the region face assaults on all fronts. In Afghanistan, journalists are in the crosshairs of targeted killing campaigns. They have been abducted and shot in Pakistan, including one who survived a shooting on Tuesday. In India, reporters have been accused of sedition simply for covering anti-government protests. And in Bangladesh, they’re victimized by the draconian application of a digital security law.

This week, the first few coaches of a Japanese-made metro train arrived by boat in Dhaka, Bangladesh, the latest step in an effort to launch the country’s first metro rail system. The government plans to open it to passengers next year. Dhaka is the world’s most densely populated city. The new rail system should ease traffic congestion, reduce vehicle emissions, and make the roads safer for pedestrians—an issue that has sparked mass protests in the past.

Moreover, better infrastructure in Bangladesh is a prerequisite for stronger economic growth. The question is whether the metro will function smoothly—and if people are willing to pay for it. Officials plan to charge passengers about 3 cents per kilometer.

“We try to control our emotions, but it is unbearable.”

—Kamlesh Sailor, the president of a crematorium trust in Surat, India, speaking to the Washington Post about receiving 100 bodies a day during the coronavirus surge

An editorial in the Dhaka Tribune argues that because garments are likely to remain Bangladesh’s top export for a while, the country should ensure it remains globally competitive: “The last thing that Bangladesh needs is for its primary export industry to fall into complacency.”

Obaidullah Baheer, a university lecturer in Kabul, writes in Tolo News that Afghan political elites are “much more conflicted and divided” than the Taliban. Their inability to reach a consensus on peace could undercut negotiations and prompt the United States to “give up on the project and withdraw” from the peace process, he writes. 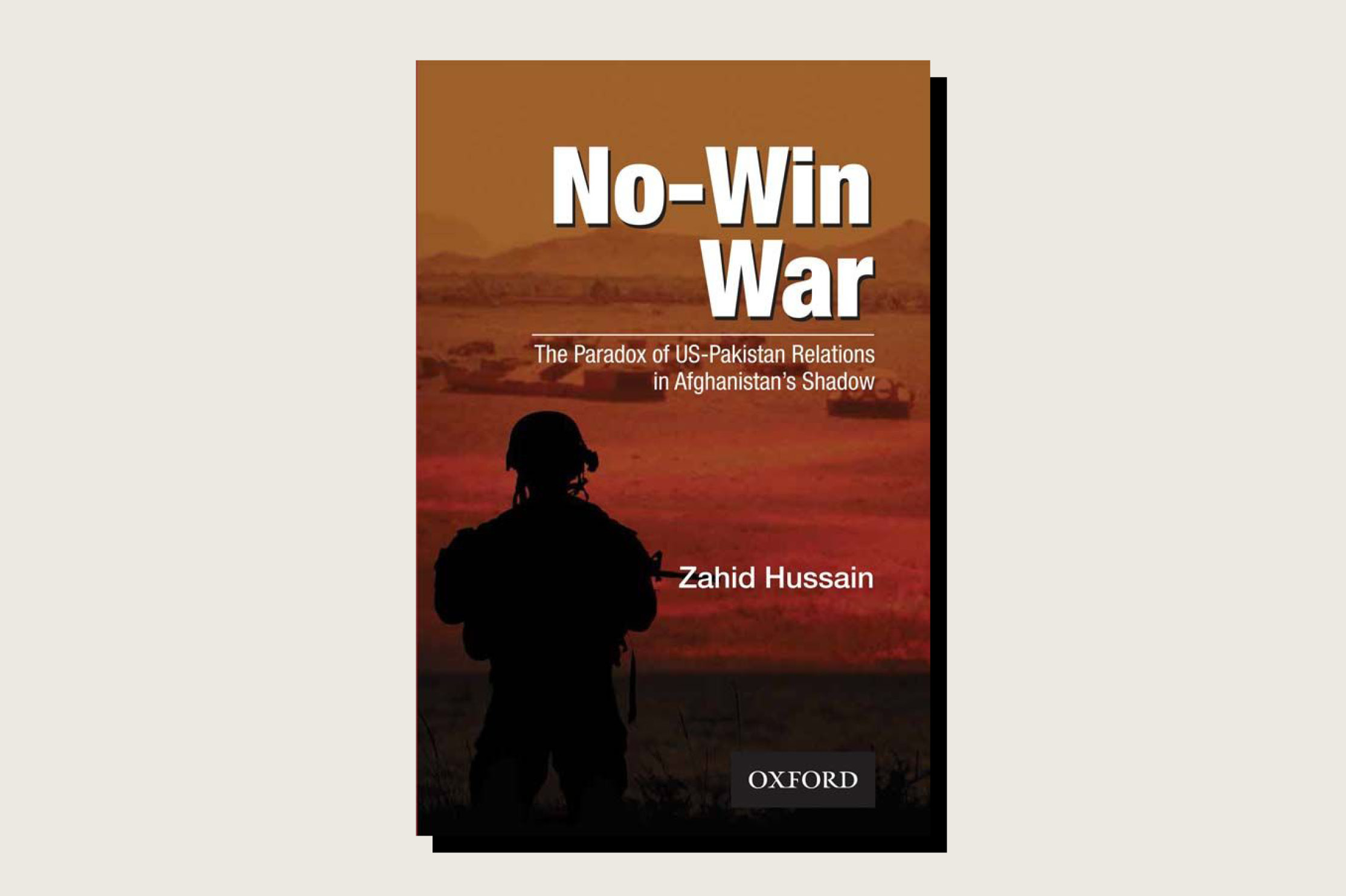 This new book by Pakistani journalist Zahid Hussain provides a gripping account of the war in Afghanistan’s impact on the volatile U.S.-Pakistan relationship. The broad outlines will be familiar for keen observers, but the author draws on new interviews with key players in Washington, Islamabad, and Kabul to reveal some fascinating and little-known details.

For example, soon after 9/11, when the Taliban were under pressure to give up Osama bin Laden, Taliban leader Mullah Omar wanted to release him to a group of Chechen leaders—only to be informed that Russia forces had “deposed” them.

With U.S. troops preparing to leave Afghanistan, No-Win War takes a retrospective look at an era that shaped one of Washington’s most complex bilateral relationships.

NEW FOR SUBSCRIBERS: Want to read more on this topic or region? Click + to receive email alerts when new stories are published on Health, Pandemics, India, South Asia