The highlights this week: Questions defining the start of Miguel Díaz-Canel’s helmsmanship of the Cuban Communist Party, how to trace a migrant kidnapper’s paper trail, and a look at the region’s groundbreaking Escazú environmental treaty.

Although Raúl Castro left Cuba’s presidency in 2018, he remained head of the nation’s Communist Party until this past weekend, when its congress handed the position to current President Miguel Díaz-Canel. Díaz-Canel is expected to consult Castro on major decisions and continue gradual steps toward the economic opening that began in 2011 and accelerated early this year amid Cuba’s worst economic slump since the early 1990s.

In 2020, Cuba’s economy shrank 11 percent, with a pandemic-related hit to the island’s tourism industry coming against a backdrop of reduced oil supplies from Venezuela and a U.S. embargo that has remained untouched since former U.S. President Donald Trump left office.

Díaz-Canel has signaled an economic opening will not be equivalent to a political opening. Under his presidency, Cuba’s largest protest movement in years has been met with arrests, including fresh detentions last week of high-profile activist Luis Manuel Otero Alcántara.

Although Díaz-Canel promises continuity, two open questions about his tenure continue: How soon will Cuba’s economy recover, and how successful will Cuba’s COVID-19 vaccines prove as domestic and foreign-policy tools?

Scoring economic reforms. In January and February, Díaz-Canel took the long-anticipated measures of phasing out one of Cuba’s two currencies and expanding permission for private workers to legally operate in the country.

The government raised public sector wages in anticipation of inflation spurred by the currency reform, but real prices in the first quarter appear to have grown more than the wage increase, according to University of Delaware economist Tamarys Lien Bahamonde, who called for more government support for small- and medium-sized businesses. The new permissions for private work still exclude many higher-educated professions, hampering the chance to grow productivity and reduce the brain drain.

Washington’s role. Despite U.S. President Joe Biden’s campaign pledge to “reverse the failed Trump policies that inflicted harm on Cubans and their families,” he has thus far not altered those economic restrictions, which include limits on what had previously been around $3.5 billion per year in remittances. Although 80 Democratic lawmakers called on Biden to resume Obama-era normalization policies with Cuba, a Biden administration spokesperson said it is not a top priority.

A new Cuban migrant wave? In late February, 16 percent of U.S. asylum-seekers waiting in Mexico to be processed were Cubans. On Tuesday, the U.S. Coast Guard said since January, it had observed an 80 percent increase in Cuban migrant activity compared to recent years. The island’s economic woes and a Trump-era suspension of a program that provided more than 20,000 immigrant visas each year to Cubans with close family members in the United States may be brewing a new Cuban migration crisis, wrote American University political scientist William LeoGrande.

Vaccine hopes. A resounding win for the Díaz-Canel administration, domestically and internationally, would come from positive trial results from any of the country’s five vaccines currently under development. Cuba chose not to participate in the United Nations COVID-19 Vaccines Global Access (COVAX) program, betting instead on its own biotech sector.

Two of the vaccines are currently in phase three trials. If those go well, the country plans to begin a national vaccination campaign in June and hopes to vaccinate its entire population by the end of the year. It also plans to export vaccines and potentially offer them to tourists. A biomedical triumph amid economic suffering would be another example of continuity in Cuba, which opened a cancer research center during its 1990s slump.

Tuesday, April 27: A Brazilian Senate probe of the federal government’s handling of the COVID-19 pandemic begins.

Saturday, May 15 to Sunday, May 16: Chile holds local elections and elects members of its constitutional drafting assembly.

Nicaraguan raids. On the three-year anniversary of Nicaragua’s “April Rebellion” protests against the Ortega government—which yielded a crackdown where more than 300 people died and more than 100,000 people fled the country—police carried out arrests and domestic raids against several opposition figures, including presumed presidential candidate María Eugenia Alonso, Confidencial reported. 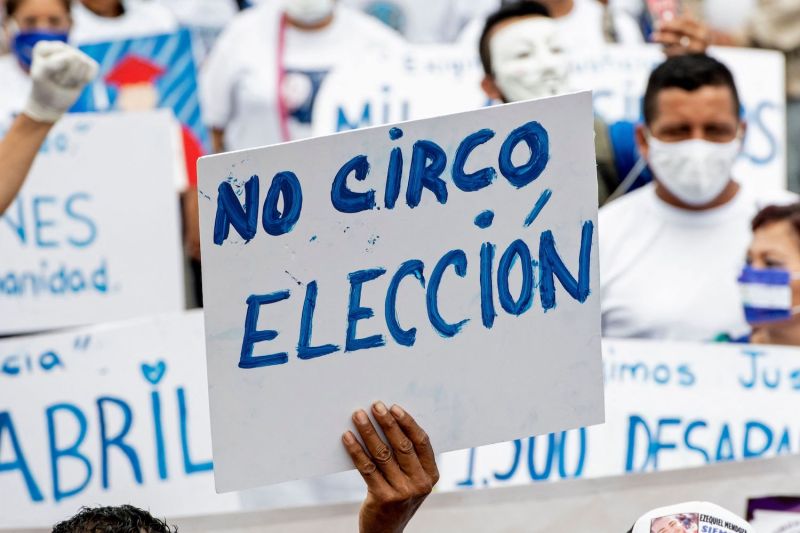 A Nicaraguan living in Costa Rica displays a placard reading “No Circus Election” during a demonstration to commemorate the third anniversary of the protests against Nicaraguan President Daniel Ortega in San José, on April 18. Ezequiel Becerra/AFP/Getty Images

Mexican mobile data law. On Tuesday, a judge blocked part of a new Mexican law that requires cellphone users to submit biometric data, such as fingerprints and eye scans. The measure had drawn pushback from privacy and consumer safety advocates. The judge wrote there was no causal relationship between such data gathering and better investigations of crimes—one official justification for the new law. It will now face further examination in the courts.

Kidnapping’s paper trail. Much of Mexican criminal organizations’ earnings on migrant kidnappings is easily traceable in money transfers sent by U.S. companies, but law enforcement often fails to investigate them, according to a VICE report. A joint U.S.-Mexican effort against human smuggling has fizzled in recent years: Although U.S. border authorities referred more than 3,000 cases to the Mexican justice system between 2005 and 2016, they referred only nine cases since 2017.

The U.N. in Venezuela. After months of negotiations, the U.N. World Food Program reached an agreement with Venezuela’s government to distribute food aid to 1.5 million schoolchildren by 2023. Venezuelan President Nicolás Maduro had reportedly held up the agreement over a demand that food be distributed through networks he controls rather than impartially.

Maduro also sought U.N. assistance this month to clear landmines on Venezuela’s border with Colombia. In Foreign Policy, Paul J. Angelo wrote the U.N. should build on Maduro’s recent overtures and play a more active role in mediating a pathway out of Venezuela’s political crisis.

A portrait of marijuana use. South America is home to the highest quantities of marijuana seized in the world, according to the United Nations. Although North America moves toward legalization, in South America, criminalization is the norm and comes hand in hand with narratives about the drug as a gateway to crime and danger.

To offer a less stereotyped portrait of the broad swathe of South Americans that are recreational marijuana users, El País and illustrator Lorena Barrios profiled 10 of them, including a dentist, a businessperson, and a therapist.

Which Cuban COVID-19 vaccine under development is named after a poem by revolutionary writer José Martí?

In Focus: The Escazú Environmental Treaty

On Thursday, Latin America’s Escazú agreement came into force after a 10-year journey from its conception at the United Nations Conference on Sustainable Development in Rio de Janeiro. The treaty is unique in its drafting process, which occurred with broad participation from civil society, and in its landmark commitment to protecting front-line human defenders of environmental rights, who are killed in Latin America more than in any other region of the world, according to Global Witness.

Treaty participants guarantee access to environmental information within 30 business days; promote public participation in decisions affecting the environment; and ensure freedom from threats, restrictions, and insecurity for those who defend human rights in environmental matters. The agreement now comes into effect after a threshold of 11 countries finally ratified it, with Argentina and Mexico the latest to do so in January of this year.

Who’s still out. Both Costa Rica, the country where the accord was finalized, and Chile, which co-directed negotiations on the agreement between 2014 and 2018, have yet to ratify the agreement. Chile’s current government under President Sebastián Piñera, who took office in 2018, said the treaty was too broad and ambiguous to sign.

Testing grounds. Writing in Animal Político in January, transparency experts from Mexico’s state of Yucatán and the nongovernmental organization Article 19 pointed out that if Mexico is to make good on its Escazú obligations, the government will have to rethink its massive Mayan Train project. The project was flagged by U.N. inspectors as lacking adequate environmental impact studies and local consultations, and activists seeking information have faced hostilities. Part of the project was suspended by a judge in February, but the Mexican government may appeal.

To make the Escazú guarantees a reality, Global Witness’ Marina Comandulli said companies as well as governments must shift their priorities and resources. Members of the treaty committed to follow-up meetings beginning in April 2022, at the latest, to evaluate its effectiveness.

Cuba’s vaccines are named Mambisa, after anti-colonialist guerrillas who fought against Spain; Soberana 1, Soberana 2, and Soberana Plus; and Abdala, the name of an eight-act poem Martí wrote as a teenager that depicted an African fighter defending his homeland against invaders. Baracoa is a city on Cuba’s east coast.