China Set to Record Its First Population Decline in Decades

Census data is expected to reflect a simple reality: Having children in China is expensive and burdensome for many families.

The highlights this week: Beijing’s 2020 census data is expected to show a population decline, director Chloé Zhao’s Oscar win hasn’t been mentioned in Chinese press, and Jack Ma finds himself under fire again.

The highlights this week: Beijing’s 2020 census data is expected to show a population decline, director Chloé Zhao’s Oscar win hasn’t been mentioned in Chinese press, and Jack Ma finds himself under fire again.

China is expected to report its first population decline since Mao Zedong’s Great Leap Forward in its latest census, which could spark a crisis moment in a country deeply worried about its aging demographics. After the one-child policy was formally lifted in 2015, the government hoped that a baby boom would follow, but the figures show it hasn’t materialized—because having kids in China is just too expensive.

Censuses in communist countries have always been politically sensitive, since they often speak to failed policies or hidden disasters. Chinese officials have already delayed the release of the 2020 data—and it may later be buried, either not released or not covered by the media. China recorded more than 1.4 billion people in 2019, and a fall below that number will bring a significant moment closer: when India, with a population of 1.38 billion, officially becomes the world’s largest country.

The declining figures have nothing to do with COVID-19 deaths. For the coronavirus to make a scratch on the Chinese population, the official death toll—4,636—would need to be hundreds of times higher. Although researchers say the actual figure could be five to 10 times more, deaths on an exponentially higher scale would have shown up on social media or in mortality data. (Chinese censorship is strong, but it is not all-powerful, as the documentation of state abuses in Xinjiang has shown.)

However, it is possible that the pandemic’s impact made people in China even more risk-averse about having children last year.

The population decline fundamentally reflects a simple reality, pandemic aside: Having children in China is expensive and burdensome, as it is in most developed economies. By the end of the one-child policy period, the financial and social costs of raising children were holding urban, middle-class families back from having multiples—not family planning rules. (A recent video game captured just how much is involved in modern Chinese parenting.)

On top of that, many Chinese face the responsibility of caring for aging parents, especially tough for a generation of only children, as well as the stigma of single parenthood. For the poor, the stress of separation from children due to labor migration, the difficulty of finding education or health care in big cities, and the impossibility of buying apartments—often a social requirement before marriage—present other obstacles.

China isn’t a developed economy, making its low fertility rate even more of a burden than it is for countries such as Japan or Italy. Despite China’s vast economy, it still has a per capita income below the global average, making the problem of supporting a graying population with a shrinking labor force more acute. China’s growth model is still labor-driven, and unlike European countries or the United States, it has no immigration flow to counteract fertility loss. The ethnonationalist turn under President Xi Jinping makes it unlikely there ever will be.

Chinese authorities are also focused on so-called human quality: They want college-educated women, not farmers, to have babies. Pressure on women to abandon careers in favor of raising children has increased, along with plenty of feminist resistance. The shock of the new population figures will likely cause a jump toward more natalist policies. On the positive side, that could mean more public resources for health care, child welfare, and education.

But the machinery of the Chinese state turns more toward repression than reform right now, and negative policies such as abortion limitations and forcing women out of the workplace could be more likely. Beijing has spent decades claiming authority over women’s reproduction already, after all, and there’s a vast family planning bureaucracy that needs something to do.

Oscar winner censored. Chloé Zhao, the Beijing-born director of Nomadland, won an Oscar on Sunday in a breakthrough moment for Asian women in Hollywood. But there is no mention of it in the Chinese press. Zhao has been a persona non grata since she gave a 2013 interview criticizing China’s politics, calling it “a country where there are lies everywhere.”

It’s not the first time Beijing has thrown away a potential soft-power moment in favor of repression. Gao Xingjian’s 2000 Nobel Prize in literature has been removed from official memory, with state media often describing the 2012 win by Mo Yan as China’s first. Zhao’s outspoken politics come despite her family being among China’s ultra-rich: Her father was the head of a steel group and a major real estate developer, and her stepmother is Song Dandan, a famous comic actor.

Xi on tour. Xi is conducting a tour of the southern province of Guangxi, with an emphasis on borderlands security and development in minority areas. The state views China’s southern minorities as more assimilated and thus less threatening than Uighurs or Tibetans, not least because they generally lack national ambitions of their own.

Xi’s speech during the tour about the Xiangjiang River, the site of a critical fight during the Long March, was heavy on political language, per Bill Bishop’s translation. Expect more of this rhetoric ahead of the 100th anniversary celebrations of the founding of the Chinese Communist Party (CCP) in July.

Another Australia debacle. The ongoing war of words between Canberra and Beijing took an ugly turn this week, as the Chinese Ministry of Foreign Affairs called Australia “sick” for tearing up Belt and Road Initiative agreements. Australian officials have warned of a potential war over Taiwan, a theme echoed by some U.S. commentators. This seems very premature: China’s saber rattling over Taiwan is aggressive, but it is long way off from an actual invasion—which would be signaled well in advance.

Meanwhile, Jane Golley, a prominent Australian academic, is embroiled in controversy after endorsing an anonymous, unpublished, and unreviewed paper that attempts to defend China’s atrocities in Xinjiang and attacks Western scholars. I’ve seen the paper: It’s sloppy work that appears to have been produced as part of China’s concerted propaganda campaign.

The discipline of Chinese studies in Australia has become politically heated because of the country’s rethink of its relationship with Beijing; a similar phenomenon is already happening in the United States.

Jack Ma still in the spotlight. Chinese authorities are investigating how Ant Group’s planned initial public offering got speedy approval last year, a sign that the state’s humiliation of the technology billionaire and Alibaba co-founder Jack Ma isn’t over. Ma has faced a concerted campaign since the IPO was blocked at the last minute, part of a wider crackdown on tech firms.

It’s possible that this latest move intends to destroy Ma completely, perhaps by bringing bribery charges against him. If so, the politicized fall of a man once hailed as a national champion would serve as a sharp reminder of how little space the CCP is willing to give to anyone in today’s China. The destruction of the Alibaba empire could see it being portioned out to members of the political elite behind the scenes.

Oracle plays defense. The Intercept reports that the U.S. software giant Oracle has been deeply involved in surveillance work in China, marketing heavily to police and security departments there even as the state’s racist policing of Uighurs and other minorities comes under scrutiny. Oracle Executive Vice President Ken Glueck responded to the report with a rambling blog post asking for “information on Mara [Hvistendahl, the Intercept reporter].” Going after individual reporters is a common tactic for Chinese firms but an unusual choice for a U.S. one. 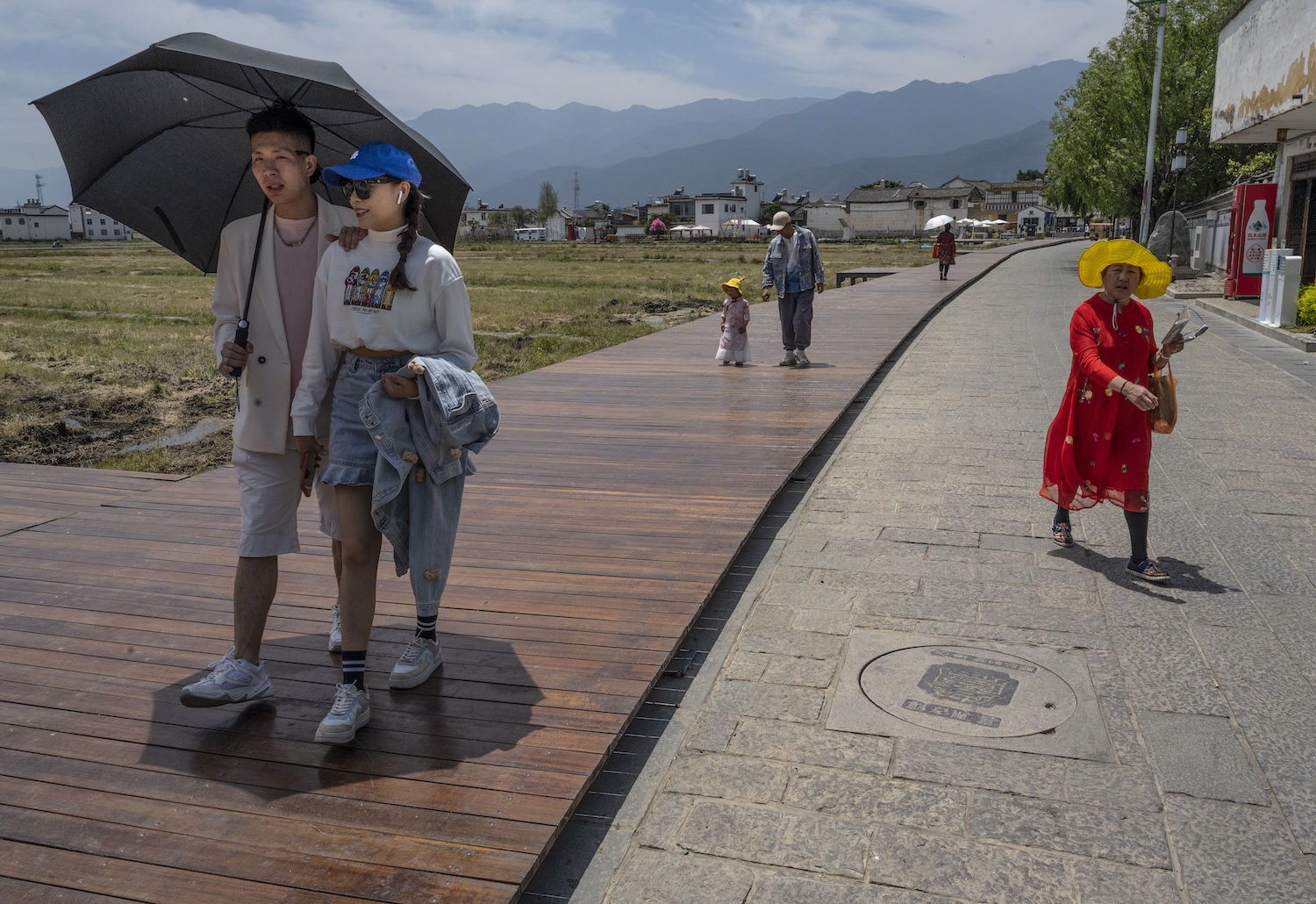 By Chinese standards, the city of Dali is basically a village. Sitting in the highlands of Yunnan, a southern province famous for its food and various ethnic groups, Dali is a quaintly beautiful, slow-moving town that has been a favorite of both Western and Chinese hipsters and hippies since the 1980s.

Yunnan wasn’t conquered by Chinese empires until the 1380s, although the Han Empire established military outposts there, and Dali was the capital of one of the region’s many powers, the eponymous Kingdom of Dali, a mountainous Buddhist state.

Today, Dali is a famous tourist destination with a thriving art scene. Most of the locals are Bai, a heavily Sinicized minority group, but the sense of Bai identity is largely a show for visitors. The city offers a rare combination of natural beauty, especially the stunning Erhai Lake, and preserved historical buildings. Disappearing to Dali to live is a little bit like moving to Portland, Oregon: It’s what someone would do when they’re burned out on the world and want to hang out with pleasant eccentrics.