Welcome to Foreign Policy’s Security Brief. In case you hadn’t noticed, Paddington 2 and not Citizen Kane is now the greatest movie of all time, according to the internet.

The highlights this week: Biden lays out his next 100 days in office, updates on a slew of Biden administration nominees, and anger on Capitol Hill over Afghanistan withdrawal plans.

If U.S. President Joe Biden wants you to take anything away from his first 100 days in office, it’s this: Domestic policy is foreign policy.

That was the message he laid out Wednesday night in a State of the Union-like address to Congress, where he directly connected bolstering the U.S. economy to the competition to “win the 21st century” against China. And Biden veered from his prepared remarks to deliver a stern warning to lawmakers: China thinks the United States is moving too slowly.

“I spent a lot of time with President Xi—traveled over 17,000 miles with him, spent over 24 hours in private discussions with him,” Biden said. “He’s deadly earnest on becoming the most significant, consequential nation in the world. He and others, autocrats, think that democracy can’t compete in the 21st century with autocracies, because it takes too long to get consensus.”

But even in a consensus-driven system, Biden has made one thing clear: He’s running the show.

Bringing them back home. Nowhere was that clearer than in Afghanistan, where Biden overruled the advice of his generals to pull U.S. troops from America’s longest war. “The war in Afghanistan, as we remember the debates here, [was] never meant to be multigenerational undertakings of nation-building,” Biden said last night.

But Washington is still figuring out what the game plan will be for over-the-horizon efforts to keep an eye on the country, and it’s prompting some serious questions on Capitol Hill (more on that below).

A shot in the arm. Biden pledged that the United States will become an “arsenal of vaccines” for other countries as the COVID-19 vaccination drive concludes domestically. That could go some way toward nudging coronavirus-ravaged India to more fully embrace Biden’s counter-China strategy, as well as mercurial U.S. allies in the region such as the Philippines.

Biden’s here to drop noms. The president has tapped Frank Kendall, the Pentagon’s former acquisition chief during the Obama administration, to be the Air Force’s top civilian, pending Senate confirmation. Defense News first reported on the decision, which would bring a noted skeptic of the troubled F-35 fighter jet program back to the Pentagon.

Gearheads. Joining Kendall as his deputy would be Gina Ortiz Jones, who launched a failed bid to land a vacant House seat in Texas last year. Jones is an Iraq War veteran and former Air Force intelligence officer. (Flashback: Jones spokes to Foreign Policy on the campaign trail last year why she was making a play for political office.) If confirmed, she would be the second openly gay undersecretary of the Air Force after Eric Fanning, who served under President Barack Obama.

Biden has also selected Heidi Shyu, the Army’s former top weapons buyer, to be his nominee for undersecretary of defense for research and engineering, and Meredith Berger to be the Navy’s assistant secretary for energy, installations, and environment.

The Fulton and Skelly picks would bring two outspoken LBGTQ officials into the administration, another sign of Biden’s efforts to turn the page on former President Donald Trump’s ban against transgender service members.

And more on the Navy side… Biden’s likely pick to be secretary of the Navy is Carlos Del Toro, Politico reports, which would make him the second Latino official to hold the role. Del Toro is the chief executive of SBG Technology Solutions and a Virginia resident who has already privately won backing from his home state Sen. Tim Kaine.

Man with a plan. Sam Brannen, a former senior fellow at the Center for Strategic and International Studies, has joined Biden’s Pentagon as a deputy assistant secretary for plans and posture.

Meet the new boss. Adm. John Aquilino will take over as the commander of U.S. Indo-Pacific Command on Friday, with Secretary of Defense Lloyd Austin on hand in Hawaii to watch the changing of the guard. He takes over from Adm. Phil Davidson, who recently warned of a possible Chinese takeover of Taiwan within the next six years.

We’ve seen enough to Kahl it. In a squeaker, the Senate confirmed Colin Kahl to be the Pentagon’s top policy official in a 49-45 vote, with several Republicans absent. Kahl earned the ire of the Senate Armed Services panel’s top Republican, Sen. Jim Inhofe, and several other Republican lawmakers over his support for the Iran nuclear deal and past tweets critical of Trump.

Foggy Bottom news. Biden has tapped career foreign service officer Donald Lu to serve as assistant secretary of state for South and Central Asian affairs. (If you want to start catching up with him on Duolingo, he speaks English, Chinese, Albanian, Russian, Azerbaijani, Georgian, West African Krio, Hindi, and Urdu.)

Power’s hour. Three months after her nomination was first announced, Samantha Power was confirmed to lead the U.S. Agency for International Development Wednesday in a 68-26 vote.

I’ll refer you to the Taliban on that. U.S. lawmakers on both sides of the aisle aren’t happy with America’s plan to prevent a Taliban takeover in Afghanistan, something on display this week during a testy Senate hearing with Biden’s envoy for Afghan peace talks, Zalmay Khalilzad.

The U.S. departure could lead to a Taliban offensive that “topples the government,” Sen. James Risch, the top Republican lawmaker on the foreign affairs committee, said, while Menendez, the committee chairman, complained that the administration’s messaging on the path forward on counterterrorism had been “limited” and rebuked the administration for blowing through a deadline on reporting to Congress on peace talks progress.

“We don’t write laws and expect that they will be ignored,” Menendez said.

But despite all the anger, no senator posed a clear alternative for the Biden administration’s plans beyond the status quo: Muddling through with the gains the United States and its coalition partners have made with a several thousand troops to backstop the Afghan security forces. 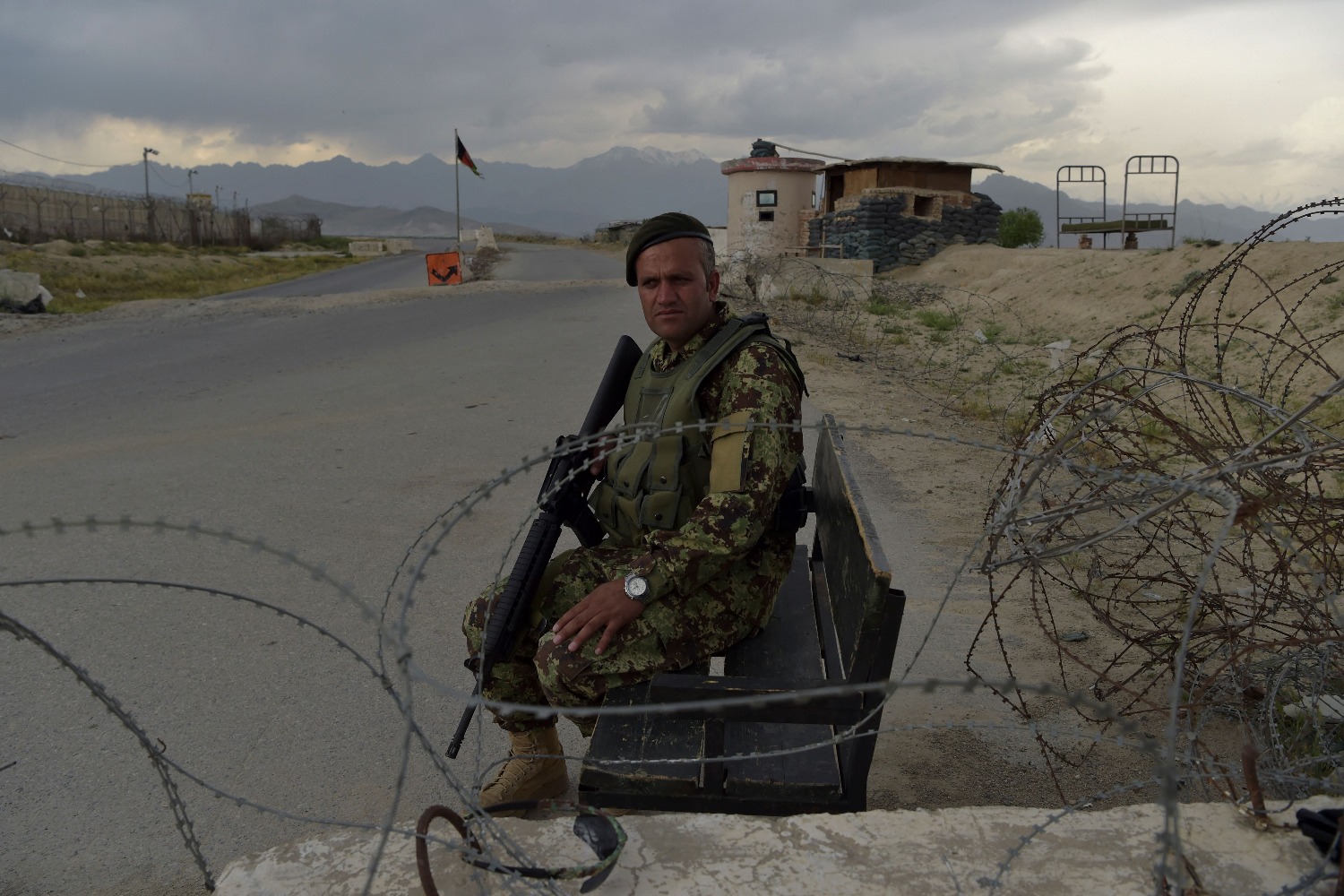 An Afghan National Army soldier sits at a road checkpoint near a U.S. military base in Bagram, north of Kabul, on April 29.Wakil Kohsar/AFP via Getty Images

While Morrison didn’t name China in his remarks, the moves, which will lengthen an airstrip in Australia’s Northern Territory and improve facilities where U.S. troops train, sends a signal that other U.S. allies in the region are bulking up their military as regional competition with China ramps up.

Trouble in the Horn. The conflict in the Tigray region of Ethiopia could foreshadow instability across the country and region if it isn’t resolved fast, Biden’s new Horn of Africa special envoy, Jeffrey Feltman, warned in an interview with Foreign Policy.

Here’s how he put it: Syria, pre-civil war, had a population of some 22 million and caused a full-fledged regional catastrophe, led to the rise of the Islamic State, and fueled a refugee crisis for Europe. Ethiopia, by comparison, has 110 million people and may be teetering on the edge of instability. If things go downhill fast there, it could make Syria look like “child’s play,” Feltman said.

“If you’ve been to the upper Kunar Valley, you’ve seen the gates of hell.”

—U.S. President Joe Biden, on Afghanistan’s hard-fought Kunar Valley region, which he visited in 2008 before becoming vice president. The comments provoked criticism from other Kunar visitors, who showed off some beautiful pictures of the area on Twitter.

Leaving money on the table. Biden’s plan to leave Afghanistan is going to be pricey, Mackenzie Eaglen, a defense budget guru at the American Enterprise Institute, writes for Foreign Policy. Among the continuing costs are salaries for the 300,000 Afghan National Security Forces, fees for breaking contracts, and money for providing logistical and air support from outside the country.

Vladislav Ivanov, a Mandarin speaker from Vladivostok, a major Russian city on the Pacific, was finally booted from the Chinese show Produce Camp 2021 after pleading with fans to vote against him so he could leave without breaching his contract. Fans finally took pity and voted him off, but not before he made it to the final round.

Blair’s hair. Yes, even former world leaders are having bad hair days during quarantine: Former British Prime Minister Tony Blair got razzed online for his Lord of the Rings-esque hairdo. (He got it cut quickly after the Twitter rumpus.)

India Gives Up Its Anti-Colonial Obsessions and Embraces Europe