News and analysis from India and its neighboring countries in South Asia—a region that is home to one-fourth of the world’s population—written by the Wilson Center's Michael Kugelman. Delivered Thursday.

The countries have built up goodwill over the decades, but the delay in U.S. COVID-19 assistance exposes lingering concerns about the partnership.

The highlights this week: The United States announces a belated pandemic aid package for India, officials prepare for the possibility of Taliban attacks on U.S. troops after May 1, and Sri Lanka’s cabinet approves a burqa ban.

This week, India accounted for one of every three reported coronavirus cases in the world. Wednesday marked seven consecutive days of new daily cases exceeding 300,000, with nearly 120 people dying from COVID-19 per hour. And the real figures are likely higher: Many experts say the official tallies underreport the death toll, and the positivity rate of COVID-19 tests has reached as high as 40 percent in Delhi.

The world has now mobilized to assist India, with more than a dozen countries pledging assistance. After a delayed response, the United States has announced plans to provide raw materials for vaccine production, oxygen and other supplies, and investments to strengthen vaccine manufacturing capacity.

There are a few reasons for Washington’s slow response: The already-overextended Biden administration has few senior India-focused officials in place, and it is cautious about planning overseas assistance when it’s still fighting the pandemic itself. But there were several days of radio silence, even as top U.S. rivals such as China, Iran, and Russia expressed solidarity with India and offered assistance. Indian officials and the public were taken aback.

The White House eventually reversed course with the announcement of assistance, expressions of support from nearly a dozen senior officials, and a call between U.S. President Joe Biden and Indian Prime Minister Narendra Modi—putting to rest concerns about a potential rift. The U.S.-India relationship has grown exponentially over the last two decades, building trust, and the countries share convergent interests about China’s rise. U.S.-India relations may have suffered a setback, but last week’s events probably won’t leave a lasting scar.

Nonetheless, the U.S. response lag did expose some lingering Indian concerns about the United States. For some Indian commentators, the delay hardened perceptions that Washington is not a truly dependable partner. Some prominent politicians agreed. Baijayant “Jay” Panda, the national vice president of the ruling Bharatiya Janata Party, tweeted that a major challenge for U.S.-India relations has been “our institutional memory of being let down in earlier decades. Now, despite developing much bilateral synergy, this memory will linger.”

This grievance could also animate some commentators on India’s left, who view Russia as a more reliable partner and are uncomfortable with New Delhi’s increasing closeness with Washington. More than a decade ago, obstructionist communist political parties nearly torpedoed a U.S.-India civil nuclear deal now seen as a milestone. During a 2014 visit to the state of Bihar, where leftist parties are influential, I heard students and academics rail against U.S. policy in the region and lament the U.S.-India partnership.

Within the Indian government and the political elite, support for the United States remains robust. But Washington sees its relationship with New Delhi as broad-based and focused on engagement with the wider public. It shouldn’t take any concerns about its slow response to India’s coronavirus crisis lightly, especially not those from influential pro-U.S. voices.

The slow U.S. response could harden New Delhi’s long-standing opposition to a formal alliance with Washington or any other foreign government. Indian foreign-policy expert Aparna Pande recently noted that the delay “reinforce[s] the argument … that strategic autonomy is the path to continue with, not further alignment.”

Additionally, the delay in U.S. assistance highlights a challenge for the Quadrilateral Security Dialogue, or Quad, between Australia, India, Japan, and the United States that has recently gained momentum. The Quad identifies pandemic cooperation as a priority, and leaders reached an agreement on vaccine production and distribution in March. But several weeks later, Washington was slow to respond when a fellow Quad member faced a pandemic catastrophe.

This disconnect suggests the Quad needs a nondefense, non-alliance equivalent of NATO’s Article 5 clause, which treats an armed attack on any member as an attack on all members and requires joint responses. The group could benefit from a mechanism that assures collective responses when one member is hit by an emergency.

U.S. help is now on the way to India. But with new cases and deaths rising, central and state governments still struggling to address oxygen shortages, and only a fraction of its population vaccinated, India is nowhere near out of the woods. It’s worth considering how to ensure help in a crisis comes faster in the future, to India or any other Quad member.

Saturday, May 1: India’s COVID-19 vaccine eligibility expands to include anyone over the age of 18, although access to vaccines remains limited due to cost and supply issues.

Saturday, May 1: The United States faces a previously agreed deadline for its complete military withdrawal from Afghanistan, according to its 2020 deal with the Taliban.

Sunday, May 2: Ten-year anniversary of the U.S. raid on Osama bin Laden’s compound in Abbottabad, Pakistan.

Preparing for May 1 in Afghanistan. The agreement struck between the United States and the Taliban in 2020 stipulates that all remaining U.S. troops withdraw from Afghanistan by this Saturday, May 1. Although Biden has committed to ending the U.S. military presence, his plan calls for the pullout to conclude by Sept. 11—four months past the original deadline. (Recent reports indicate it may be complete by July 4.)

The Taliban insist that the May 1 deadline can’t be violated and have warned that they won’t ruling out attacks on U.S. troops after that date. The group’s messaging indicates the United States has failed to get the insurgents’ buy-in for an extension—one of the Biden administration’s initial key policy objectives in Afghanistan.

Washington is taking the threat of attacks seriously. The Pentagon is deploying 650 troops to Afghanistan and beefing up air power capacity to protect the remaining 3,500 U.S. soldiers after May 1. On Tuesday, the State Department ordered nonessential U.S. personnel to leave the embassy in Kabul. Such measures are intended to prevent a worst-case scenario of U.S. forces withdrawing under fire, which would evoke unsettling memories of the chaotic final withdrawal from Vietnam in 1975.

India-Pakistan detente developments. Over the last week, new disclosures have emerged about Pakistan’s thinking on bringing about a thaw in India-Pakistan tensions. Since the two sides agreed to a border cease-fire in February, Pakistani officials are still keen to improve ties with India so Pakistan can focus more on economic and other domestic challenges, Dawn reported.

However, Al Jazeera reporting revealed that Islamabad will only relaunch formal dialogue if New Delhi takes specific steps to “ease lives” in Indian-administered Kashmir. These steps include ending bans on communication and movement, releasing political prisoners, restoring statehood rights revoked in 2019, and reducing the number of Indian security forces in Kashmir.

Getting India to comply is a tall order. Its nationalist government has taken a hard-line position on Kashmir, and acting on Pakistani demands would create political risks for a government already under fire for its slow response to the coronavirus crisis. Then again, the Al Jazeera report suggests Islamabad is asking New Delhi to act on several requests—not all. Given India’s current emergency, it now has a more compelling reason than Pakistan does to defuse tensions so it can focus on its domestic front.

Sri Lanka’s burqa ban. On Tuesday, Sri Lanka’s cabinet approved a ban on all full-face veils, including burqas. The public security minister has described burqas as a “sign of religious extremism.” Although the decision requires parliamentary approval to become law, it is expected to pass because of the ruling party’s majority. The measure has generated some public opposition, especially from the Muslim community that makes up about 9 percent of Sri Lanka’s population.

The move comes on the heels of other government discrimination against Sri Lanka’s Muslims. Until February, Colombo had ordered mandatory cremations for all COVID-19 victims, even though Islam prohibits the practice. Last month, the government announced its intention to ban more than 1,000 Islamic schools. Strikingly, the U.S. International Commission on Religious Freedom’s latest Annual Report, published last week, designates India and Pakistan as “Countries of Particular Concern,” but it mentions Sri Lanka only briefly. 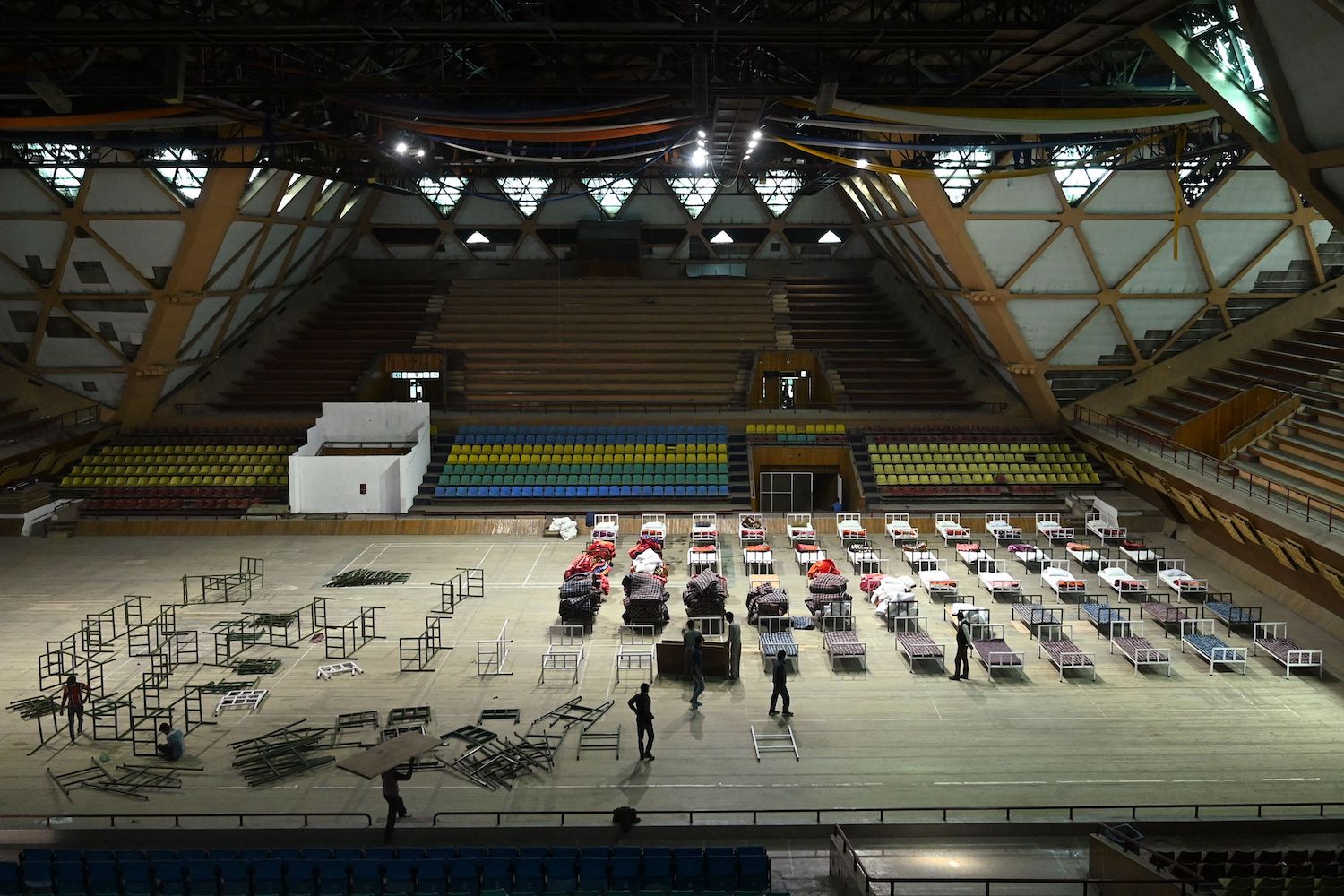 Workers prepare to convert an indoor stadium into a coronavirus center in Srinagar, Indian-administered Kashmir, on April 27.TAUSEEF MUSTAFA/AFP via Getty Images

While India’s coronavirus crisis generates headlines, the pandemic’s impact in Jammu and Kashmir has received less attention. Locals in the Kashmir Valley, where communities face hardships even under ordinary circumstances due to heavy-handed state policies, paint a dismal picture of the pandemic’s impact there.

Fahad Shah, the Srinagar-based editor of the Kashmir Walla, said this week that the Indian government has held large public events and attracted tourists to Kashmir from across India throughout the pandemic—part of an ongoing effort to project normalcy since the region lost its autonomous status in August 2019. Although the government recently imposed some restrictions, it has not yet canceled an annual pilgrimage that could bring 600,000 people to Kashmir in June.

“With the second wave of the virus only growing, Jammu and Kashmir is facing a disaster if the cases go higher,” Shah said. Poor health infrastructure, economic underperformance, and media censorship that inhibits information-sharing compound the risks.

“Today we are in a much stronger position against corona than in 2020.”

Mujahid Barelvi, a columnist for Pakistan Today, highlights Pakistan’s rich tradition of philanthropy, which has resulted in a charity-to-GDP ratio similar to wealthier countries such as the United Kingdom and Canada. But he laments that most donations go to individuals and not organizations. More institutionalized giving would “maximize the impact” of philanthropy in education, health care, and poverty eradication, he argues.

A scathing editorial in Bhutan’s Kuensel newspaper rails against new government plans for more bars and alcohol sales. “This smacks of something really sulphurous,” it argues, highlighting the threats that alcohol pose to Bhutanese society: from its role in car crashes and crime to its impact on educational attainment and employment.

Can Biden Pivot to Asia While Israel and Gaza Burn?

Biden Defaults to ‘War on Terror Approach’ to Chad