Venture capital investors continued to bet on the region amid the COVID-19 slump.

The highlights this week: Latin America’s start-up ecosystem evolves during the pandemic, Ecuador decriminalizes abortion in cases of rape, and patchwork rule by insurgent groups in rural Venezuela.

Even as Latin American economies shrank last year, the region’s venture capital sector saw nearly as much investment—over $4 billion given to companies ranging from fintech firms to digital security ones—as in record-breaking 2019. That’s according to a new report from the Association for Private Capital Investment in Latin America (LAVCA), which looks at trends for start-ups in the region.

All signs point to Latin America’s start-up ecosystem continuing its steady growth of the past few years. As recently as 2016, total venture capital investment in the region was only $500 million. As it has increased, governments have approved regulatory changes to favor start-ups—with Colombia passing a new law on entrepreneurship last year and Brazil currently debating one in Congress—and invested public money in funds to be distributed to venture capital groups. The most recent such fund was launched in Peru in December 2020.

Beyond regulatory changes, Latin American start-ups have attracted investor attention through their track records. While in Silicon Valley, start-ups are often able to secure funding with a PowerPoint, LAVCA’s Carlos Ramos de la Vega told me, Latin American founders often show “a revenue-based model and a traction-proven model,” demonstrating their resilience in what can be challenging business environments.

Sectors that shined. In 2020, fintech firms providing digital financial service infrastructure continued a multiyear run as the top money-raising start-up category in Latin America. But e-commerce, digital security, games, health tech, and education tech were among the categories that registered the most growth in value invested from 2019 to 2020, according to LAVCA. Big raisers in these categories included Mexican fintech company AlphaCredit; Brazil’s Olist, which helps merchants sell their wares online; Peru’s online learning platform Crehana; and Mexico’s health insurance and telemedicine platform Sofia.

New LAVCA surveys of 36 health tech and 32 ed tech start-ups found that more than half reported an over 50 percent rise in product use during the pandemic. Interest in those areas continued into the first quarter of 2021, when Brazilian health tech company Alice and ed tech firm Descomplica raised $33 million and $84 million rounds of funding, respectively.

While heightened attention on companies offering health and education solutions is an important development, it bears remembering that stark inequalities in Latin America still block many people’s ability to access these new products. Under half of Latin Americans have access to broadband internet. Carlos Felipe Jaramillo, the World Bank’s vice president for Latin America and the Caribbean, has written that improving that number will be fundamental to the job creation necessary to overcome the COVID-19 slump.

Who’s investing? Much of Latin America’s start-up ecosystem has relied on funding from venture capital firms based in the region. But start-ups are increasingly receiving support from international backers in places like Silicon Valley, New York, and Tokyo. Two partners at prominent Silicon Valley firm Andreessen Horowitz wrote a blog post this month laying out why “there is an enormous amount of untapped opportunity in Latin America for financial services of all types.”

The LAVCA surveys of health and education start-ups revealed another shift: Several received early-stage funding from offices that manage the wealth of Latin American families—large, low-profile investors who “traditionally have been a bit more conservative in the way they approach technology investments” but are becoming more confident in the sector, Ramos de la Vega said.

New Black and female-focused funds. In 2019, only 17 percent of venture funding in Latin America went to companies with at least one woman founder (still surpassing levels in Europe and the United States), and only 1 percent went to teams with all women founders. It was only in 2021 that a Brazilian start-up with a Black cofounder reached a billion-dollar valuation, despite the fact that 54 percent of Brazilians are Black.

Targeting what many investors see as missed opportunities for profit, several initiatives focused on female and Black founders were launched in the region since last year. Microsoft will invest $9.3 million in women-led start-ups in Brazil. For investments in women-led start-ups across the region, Amplifica Capital raised around $1 million, and Magma Partners’ Brava initiative has invested nearly $4 million. Google has likewise pledged to invest nearly $1 million in Black founders in Brazil, and Nubank, over $186,000.

Tuesday, May 4: U.S. Secretary of State Antony Blinken speaks alongside top U.S. commerce and trade officials at the Council for the Americas’ Washington Conference on the Americas.

Abortion in Ecuador. Ecuador’s Constitutional Court ruled seven to two that the country’s ban on abortion in the case of rape is unconstitutional. This effectively triggers decriminalization of the procedure, which the legislature had blocked in 2019.

Conservative President-elect Guillermo Lasso said he would respect the ruling, although his wife had tweeted a call to pray against this outcome. Ecuador’s public health ministry calculated in 2017 that 15.6 percent of maternal deaths in the country each year are due to unsafe abortions.

Brazilian regulators reject Sputnik. Brazilian health regulators denied a request to approve Russia’s Sputnik V vaccine, citing lack of sufficient data, lack of quality control, and presence in the vaccine of adenovirus that could replicate themselves (not normally present in adenovirus-based jabs). A head regulator said Brazil’s doors are not closed to the vaccine in a future evaluation, but for now, the ruling sets up a sharp contrast with the rest of the region, where Sputnik is being embraced. Argentina plans to mass-produce the shot beginning in June.

Colombian protests. Tens of thousands of Colombians protested across the country this week against President Ivan Dúque’s tax reform proposal. An earlier tax reform in 2019 was among the sparks to nationwide demonstrations, which ebbed due to the pandemic—for a while. Colombia is experiencing a third COVID-19 wave, with ICUs in Bogotá at 91 percent occupancy on Monday.

Aid and sanctions in Central America. The United States will train a Guatemalan border protection force, help build a shelter for returned migrants, and assist in those migrants’ transition back to their communities, U.S. Vice President Kamala Harris agreed on a call this week with Guatemalan President Alejandro Giammattei. Washington also announced $310 million in humanitarian aid and to address food insecurity in El Salvador, Guatemala, and Honduras.

Shortly before the call, the United States sanctioned two Guatemalan politicians, one who was also sanctioned by the United Kingdom, for reported involvement in bribes surrounding judicial appointments.

Oscar-worthy sound. One editor and three mixers on the Oscar-winning sound team of Sound of Metal—about a heavy metal drummer going deaf—are Latin Americans: Venezuelan María Carolina Santana, who is based in Paris, and Mexicans Carlos Cortés, Michelle Couttolenc, and Jaime Baksht, who mixed part of the film in Mexico City. Baksht and Couttolenc, co-founders of the Mexico City studio Astro LX, drew on their experiences for films such as Pan’s Labyrinth and I’m No Longer Here. In El País, the sound engineers described how they used different techniques to incorporate “sound as a character, as a narrative thread of the story.”

What is the name of the Latin American start-up that is currently the largest standalone digital bank in the world, with an estimated $25 billion valuation?

In Focus: Insurgent Control in Venezuela 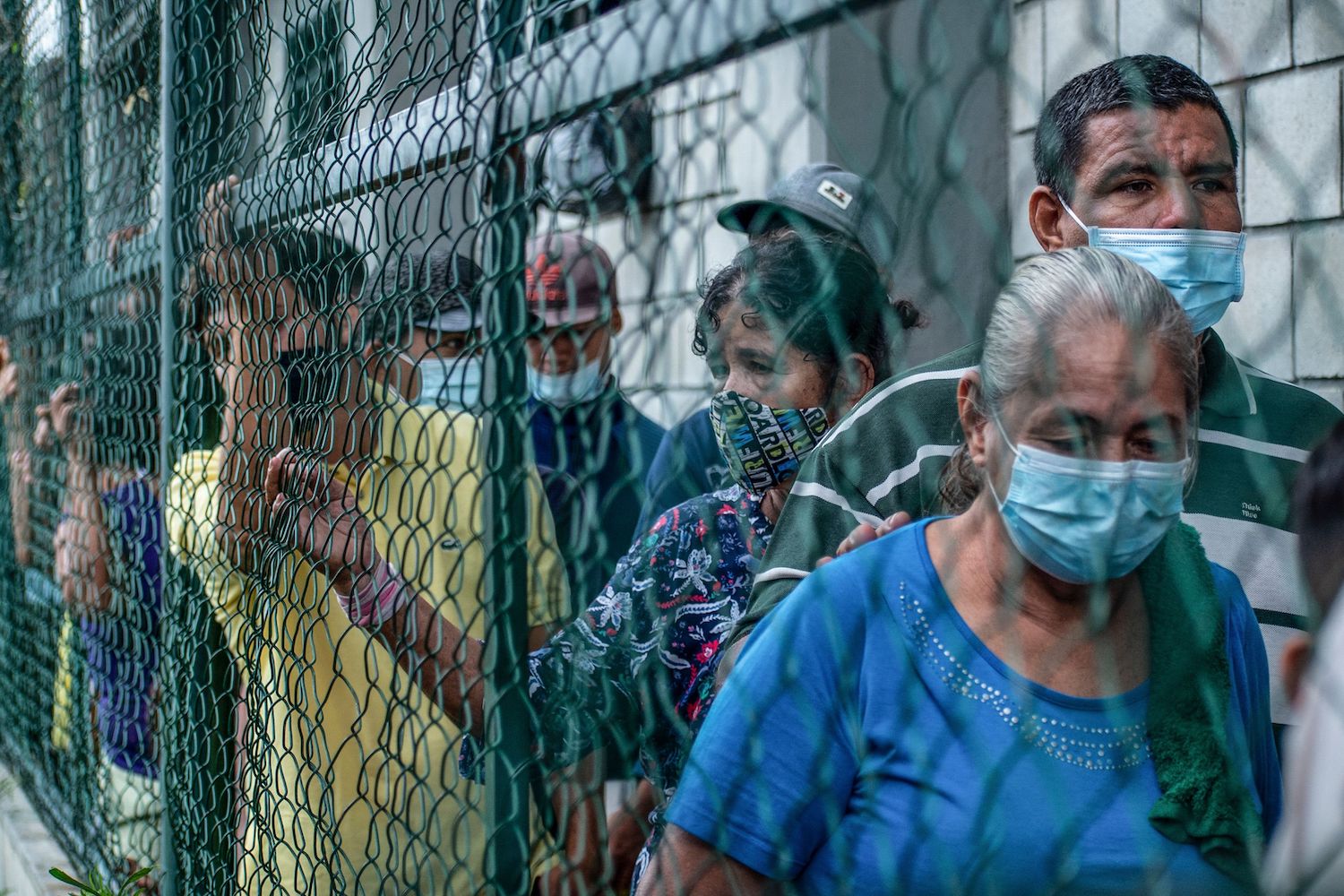 The conflict between Colombian rebels and the Venezuelan Army that has boiled around the border city of La Victoria since March is symptomatic of a larger trend—Venezuelan security forces are losing control in the nation’s countryside, even as President Nicolás Maduro tightens his political grip in Caracas. A new New York Times report looks at how insurgent groups have established themselves as local authorities in Venezuela, setting up “mini-states of their own.”

For many years, both Colombian rebels and Venezuelan criminal groups—including gangs, prison bosses, and syndicates that control illegal mining—have been strong destabilizing forces in the country. But rarely have they held such sway as now, the Times reported, focusing on Colombian rebels from the National Liberation Army (ELN) who arrived in Guajira peninsula last year, displaced local gangs, and now collect taxes in exchange for services such as medical supplies, water, and investigating murder.

Unstable neighbors. It’s not only Venezuela that is losing a grip on the countryside. In Colombia, conflict and threats linked to criminal groups caused 27,000 people to flee their homes in the first quarter of this year, a 177 percent increase over the same period in 2020, according to the United Nations. The shaky ground of Colombia’s 2016 peace accord translates to more instability on both sides of the border.

A hurdle for a possible transition. While working toward free and fair elections in Venezuela is a towering challenge, reestablishing state capacity in the countryside will be even harder. The International Crisis Group recommended last year that Venezuela’s military be involved in negotiations aimed at settling the country’s political crisis to better enforce policies toward different nonstate groups. “A solution is going to require subtlety and long-term engagement,” Crisis Group’s Phil Gunson recently told the AP.

The Brazilian digital bank reached its new valuation in a $400 million investment round this January. Bitso is a Mexican cryptocurrency platform, Kingo a Colombian firm that works with off-grid solar energy, and Chiper a Colombian e-commerce company.