A new book emphasizes the perils of social media campaigns and the limits of military intervention in saving Nigeria’s Chibok children.

In April 2014, the hip-hop mogul Russell Simmons was on a yacht cruising in the Caribbean when he tweeted about the 276 girls kidnapped by the terrorist group Boko Haram from a secondary school in Chibok, northeastern Nigeria. The hashtag he copied lit a matchstick that inflamed the world. Politicians and celebrities followed suit and shared the viral campaign, #BringBackOurGirls.

It was perhaps the first time a single hashtag had driven a multilateral military intervention. Yet the combined intelligence capabilities of seven powerful nations—the United States, Britain, Australia, Canada, France, Japan, and Israel—failed to rescue any of the kidnapped schoolchildren and couldn’t defeat the terrorist group hiding in a forest. 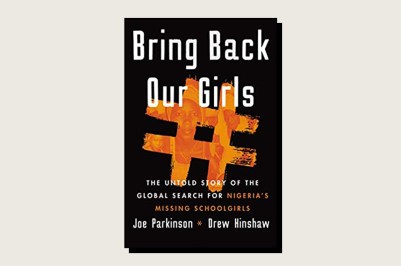 Bring Back Our Girls: The Untold Story of the Global Search for Nigeria’s Missing Schoolgirls, Joe Parkinson and Drew Hinshaw, Harper, 432 pp., $28.99, March 2021

The failings of this global intervention led to a number of fatal miscalculations, argue the Wall Street Journal correspondents Joe Parkinson and Drew Hinshaw in their new book, Bring Back Our Girls. What’s more, the fame brought about by the social media campaign kept the girls in captivity for even longer and the mistrust between the U.S. and Nigerian governments delayed action on vital information sharing.

For instance, the authors found that a Nigerian military airstrike aided by U.S. drones had accidentally bombed some of the kidnapped girls, killing at least 10. It wasn’t reported to senior officials in Washington despite a grim Boko Haram video circulating online of the dead bodies.

U.S. intelligence officers listened to intercepted calls in languages they couldn’t translate but didn’t share, not quite trusting the Nigerian government of Goodluck Jonathan with the information they’d found. Instead, the National Security Agency put out a highly unusual ad looking for Americans who spoke Kanuri, a dialect spoken in Nigeria and throughout the region.

At one point, when two girls managed to flee, the “fame meant to free them had also made it harder for them to escape,” the authors write. Boko Haram sympathizers in the first village they came across recognized the schoolgirls and promptly handed them back to their captors, largely due to their sense of loyalty toward the terrorists, who had provided basic needs for villagers when government authorities had historically failed to do.

By the time Nigerian soldiers pushed into the vast Sambisa forest, in northeastern Nigeria, the Chibok girls were already living openly in Boko Haram-held towns.

By 2017, Washington found itself bound to an anti-terrorism war it wasn’t winning in the region. Insurgencies led by Boko Haram had grown, bringing horrific scenes of churches and mosques being bombed, and of children used as suicide bombers against their own communities, covered by the world’s media.

So what did foreign governments get so wrong in the effort to take down Boko Haram and bring the schoolchildren back home? Parkinson and Hinshaw’s account begins at the White House with that infamous tweet by then-first lady Michelle Obama to #BringBackOurGirls—and the hollow interpretations of extremism and victimhood in Africa that followed.

As the authors tell it, many who took part in the #BringBackOurGirls social media wave knew that 800 U.S. troops were deployed to Niger and another 300 to Cameroon to train local security operatives, provide surveillance, and gather intelligence in the region. But many of them weren’t aware that Boko Haram had already been left to fester unabated by the Nigerian government since 2009.

High youth unemployment, poverty, and heavy-handed policing sucked men into Nigeria’s grim prisons, and those who managed not to die were spat out as hardened criminals through a circle of torture and abuse by judicial, police, and prison officials. By the time the Obama administration began pouring troops into countries surrounding Nigeria in 2014 to gather intelligence, Boko Haram already controlled significant infrastructure networks.

Parkinson and Hinshaw cast in sharp relief how Washington’s failed efforts, alongside the virality of the kidnappings, actually emboldened Boko Haram.

Parkinson and Hinshaw cast in sharp relief how Washington’s failed efforts, alongside the virality of the kidnappings, actually emboldened Boko Haram. While Nigerians were protesting on the streets for the government to do something about the missing girls, Boko Haram’s leader, Abubakar Shekau, released YouTube videos threatening to marry off the girls. “This was petrol for a Twitter fire,” the authors write. As they note, social media sold the popular but harmful trope of needy African children calling for a savior in the form of a celebrity. The authors call it “the identifiable-victim effect.” But it also echoes the Nigerian writer Chimamanda Ngozi Adichie’s warning about the “single story of Africa,” in which repeated media versions of one incomplete story of the region becomes the only story.

While the world was tweeting about the Chibok girls, Boko Haram seized six more villages with hardly any coverage outside the Nigerian press. In fact, the simplistic media constructs, the authors argue, furnished Boko Haram with the materials to build its terrorism brand. The group’s videos of the girls were being broadcast and talked about on television stations globally. Boko Haram became a household name, and it was more rewarding for the group to keep the girls captive.

The militant group’s attacks and kidnappings bring it publicity and riches while weakening state security forces.

As the World Is Distracted, Boko Haram Terrorists Strike a Key Western Ally

The battle against jihadi terrorism in Africa takes one of its deadliest turns yet, with consequences far beyond the region.

Muhammadu Buhari has failed to provide the security and stability he promised.

Months before the Chibok kidnappings, the French government had paid just over 3 million euros (about $3.6 million) to free a family of seven tourists abducted by Boko Haram. Because of the Chibok girls’ fame, the militants wanted more. “Weren’t these women worth just as much as Americans or Europeans? This was the value the Internet had given them,” the terrorists reasoned, according to the authors.

What eventually freed 103 girls, in two stages in September 2016 and May 2017, was delicate diplomacy by Swiss mediators and unsung Nigerian heroes dubbed the “agents of peace.” They negotiated a prisoner swap and 3 million euros in ransom money, according to unnamed cabinet ministers. Yet the official line from the Nigerian government is that no ransom was ever paid. Four girls later fled on their own, and 57 girls escaped within hours of the kidnapping. But 112 remain in captivity to this day. The authors estimate at least 40 have died—two from childbirth as a result of forced marriages.

“There is also the troubling counterfactual that more might have been able to escape, as thousands of Boko Haram victims have, if social media had not elevated them into an invaluable bartering chip, guarded so closely for such a long time,” the authors write. On the other hand, it is doubtful Nigerian officials would ever have made such meaningful efforts or committed such resources without the public pressure the hashtag generated.

Social media activism was well meaning but led to some unintended consequences.

While the narrative style of Bring Back Our Girls is gripping, it comes at the expense of deeper context. There is an attempt to connect key events in Iraq and Afghanistan to the Chibok story when drawing from northern Nigeria’s own history and holy wars would be more logical; that story is yet to be written.

Although the authors themselves admit this is “not a history book, nor is it a complete account of the Boko Haram conflict,” there are parts, although few and brief, where the authors risk falling into their own version of Adichie’s “single story” on Islamist fundamentalism in Nigeria—projecting the Chibok girls’ story and religious sectarianism as an explanation for all of the region’s ills. But Nigeria’s north officially operates under sharia, or Islamic law, and there is a Muslim president in power, so the religious divide cannot be the only driver of Nigeria’s conflict. In reality, political extremism and violence have slowly been normalized across the nation.

The most striking accounts come from the Chibok girls themselves, perhaps because this is one of the few published works in which we fully understand their ordeal. The authors spoke to 20 of the freed girls and include diary excerpts that were written during captivity and kept hidden for three years by one of the girls, Naomi Adamu. It reframes the Chibok story, transforming it from one of victimhood into a tale of brave defiance. I rooted for them in their various attempts at escape, despite knowing the tragic outcome.

Social media activism was well meaning but led to some unintended consequences: a militarized intervention under the umbrella of the so-called war on terrorism and a kidnap-for-ransom business by armed criminal gangs replicating Boko Haram’s most notorious abduction. More than 800 schoolchildren have been kidnapped in northwestern Nigeria since December 2020 as high-value hostages. The book makes a convincing case that dialogue is more effective than military buildup in conflicts involving fundamentalist groups—especially as extremism has continued to spread in the Sahel despite U.S. weapons sales and military engagement in the region.

Military interventions and intelligence gathering fundamentally did not address the complex problems that gave birth to extremism. “Drones offered a cheap way to sustain war but not to end it,” the authors write. “Neither Washington nor the onetime empires of Europe could extract their desired result.”

Instead, they argue, freeing the girls required Nigerians operating patiently in the shadows long after public interest had moved on. More than a decade on, the Boko Haram war has killed more than 40,000 people and displaced over 2 million in northeastern Nigeria. The challenge for us all is to understand the story beyond hollow tweets.

Nosmot Gbadamosi is a features journalist covering West Africa, focused on human rights, the environment, and sustainable development. She was previously the Africa features producer for CNN International. Twitter: @nosmotg

The militant group’s attacks and kidnappings bring it publicity and riches while weakening state security forces.

As the World Is Distracted, Boko Haram Terrorists Strike a Key Western Ally

The battle against jihadi terrorism in Africa takes one of its deadliest turns yet, with consequences far beyond the region.

Muhammadu Buhari has failed to provide the security and stability he promised.