BJP leaders had talked up the prospect of a comfortable majority after weeks of campaigning. Instead, the party suffered a heavy defeat.

Indian Prime Minister Narendra Modi’s Bharatiya Janata Party performed poorly in a key state election on Sunday as voters opted for continuity despite the best efforts of the BJP—and Modi himself.

In the end, the All India Trinamool Congress party won a resounding victory, claiming almost three quarters of the seats in the state assembly and handing its leader, Mamata Banerjee, her third term as West Bengal’s chief minister.

Even though Banerjee’s party won handily, the triumph was by no means preordained. The BJP won roughly 40 percent of votes in the state in India’s 2019 general election, making it a target at the state level. As of last Friday, BJP general secretary Bhupender Yadav said his party would win “a full majority and form the next government comfortably.”

The defeat is a chastening one for Modi, who had campaigned heavily in West Bengal—and was criticized for holding mass rallies as well as for not truncating the eight rounds of voting. Because the first of those rounds began in March, it’s not yet clear how many votes were cast in protest of Modi’s handling of the country’s COVID-19 pandemic.

Better BJP than INC? The election results were not a complete disaster for the BJP, however. The party retained power in Assam, one of the four states holding elections over the past few weeks. BJP leaders will also be glad to see the Indian National Congress—their national rival—did even worse, failing to win one seat in West Bengal.

On the ropes? Modi has until May 2024 to call the next general election so is likely to weather this electoral setback. However, public anger over the COVID-19 pandemic—which the government has tried to muzzle on social media—could prove more damaging. Modi’s net approval rating, as measured by Morning Consult, has dropped 14 points since the beginning of April and 34 points since last May—but it is still the highest of all world leaders polled.

As Kapil Komireddi writes in Foreign Policy, Modi has survived backlash before only to become stronger. Discussing Modi’s thinking in the face of India’s COVID-19 crisis (and before Sunday’s results), Komireddi helps us understand why West Bengal’s election may not quite be a wake-up call. “Modi cannot evade the blame for it, nor can he bring himself to accept responsibility for it. Nothing, certainly, can induce him to quit his job,” he writes.

On Monday, May 3, U.S. Secretary of State Antony Blinken attends a two-day meeting of G-7 foreign and development ministers.

Tuesday, May 4, is the deadline for Israeli Prime Minister Benjamin Netanyahu to announce whether he can form a government following Israel’s March 23 elections, although a 14-day extension can be granted.

On Wednesday, May 5, Blinken visits Ukraine and will meet with President Volodymyr Zelensky.

On Thursday, May 6, Scottish parliamentary elections take place. Scottish National Party leader Nicola Sturgeon has pledged to hold an independence referendum by the end of 2023 if her party wins a majority.

North Korea policy. North Korea chided U.S. President Joe Biden for his recent congressional address referencing the country’s security program as a threat to be met with diplomacy and deterrence in a statement issued on Sunday. Kwon Jong Gun, a senior foreign ministry official, said Biden had made a “big blunder” and North Korea would respond with “corresponding measures.” The comments come just days after the Biden administration’s completion of a policy review toward the country. Although light on details, White House Press Secretary Jen Psaki said the policy could include diplomacy but would attempt to avoid the mistakes of previous U.S. administrations.

Deal or no deal. U.S. officials denied an Iranian report of a prisoner swap deal with their Iranian counterparts on Sunday and said negotiations over a U.S. return to the 2015 nuclear deal were yet to reach a breakthrough. U.S. National Security Advisor Jake Sullivan told ABC News the two sides have “a fair distance to travel to close the remaining gaps” regarding U.S. sanctions relief and restrictions to Iran’s nuclear program. Russian Ambassador Mikhail Ulyanov, writing on Twitter, said he was cautiously optimistic that an agreement could be reached within the month. Separately, State Department spokesperson Ned Price said a report of a prisoner exchange was “not true.”

El Salvador’s judiciary. Lawmakers in El Salvador voted to remove five influential Supreme Court judges and the attorney general over the weekend in a move Blinken has noted with “grave concern.” The motions to remove the officials passed with a supermajority in El Salvador’s legislature, now ruled by President Nayib Bukele’s New Ideas party following a sweeping victory in February’s elections. Addressing the international community on Twitter, Bukele dismissed rebukes over the move. “With all due respect: We are cleaning house … and this doesn’t concern you,” Bukele said.

Colombia’s tax proposals. Colombian President Iván Duque Márquez has withdrawn a controversial tax proposal following days of mass protests across the country. In a video on Sunday, the president said he would propose a new policy “that is the fruit of consensus in order to avoid financial uncertainty.” Under the now-shelved tax plan, more Colombians would have had to pay income tax, and a value-added tax would have been extended to certain goods and services. The president had sold the tax reforms as a means to salvage Colombia’s national credit rating, which is likely to slip further if a deal cannot be reached.

Vaccine access. U.S. Trade Representative Katherine Tai will begin discussions with the World Trade Organization on how to better distribute COVID-19 vaccines, an issue raised in October by India and South Africa who, along with dozens of poorer countries, are calling for intellectual property waivers to help speed vaccine access. White House Chief of Staff Ron Klain made the announcement on CBS News on Sunday but didn’t elaborate further. “We’re going to have more to say about that in the days to come,” Klain said. 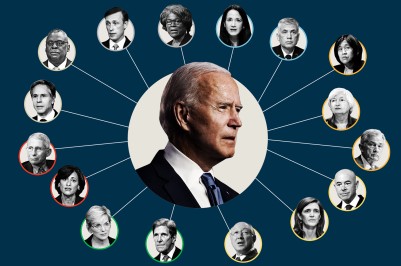 Biden wasted little time filling his cabinet and staffing key teams to tackle the administration’s most urgent priorities. As he passes his 100th day in office, the teams are articulating and implementing his agenda. To help you keep track of who’s who in the Biden administration and how they are driving foreign policy across key agenda items, FP Analytics—the research division of Foreign Policy—has created the Biden Power Map, a resource to identify key players and map the new spheres of influence driving U.S. foreign policy. Explore it here.

Scientists in Poland have discovered the first known case of a pregnant Egyptian mummy, after decades of recording the remains as that of a male priest. Wojciech Ejsmond, the director of the Warsaw Mummy Project, told the New York Times the “absolutely unexpected” find occurred while researchers were scrutinizing the pelvic area of the mummy—believed to date from the first century B.C.—and came across an “anomaly” that, on closer inspection, was the remains of a fetus. “It’s like finding a treasure trove while you are picking up mushrooms in a forest,” Ejsmond said. “We are overwhelmed with this discovery.”

NEW FOR SUBSCRIBERS: Want to read more on this topic or region? Click + to receive email alerts when new stories are published on Pandemics, India

His deputy prime minister is facing an inquiry of his own.