From “Princess” to Pariah

Once Africa’s richest woman, Isabel dos Santos has seen her empire crumble after the publication of the so-called Luanda Leaks, a trove of documents that accused her and her associates of corruption.

In January 2020, the International Consortium of Investigative Journalists (ICIJ) released more than 715,000 emails, contracts, accounts, and other documents showing how dos Santos allegedly used her political connections to build a multibillion-dollar empire. The leaks shone a light on the network of Western companies that allegedly enabled the looting of one of Africa’s largest oil producers.

In the past month, she has begun to engage with the press and social media to maintain her innocence, blaming her financial woes on the scandal’s global fallout and posting inspirational messages to her more than 270,000 Instagram followers.

Downfall of a dynasty. Dos Santos is the daughter of José Eduardo dos Santos, one of Africa’s longest serving leaders who ruled Angola for 38 years as head of the country and the liberation-movement-turned ruling party the People’s Movement for the Liberation of Angola (MPLA).

During the last decade of her father’s rule, Isabel dos Santos built an empire that spanned the telecom and energy sectors, a supermarket chain, a brewery, and significant investments in Angola’s former colonizer, Portugal. Amassing a personal fortune of more than $2 billion, dos Santos maintained she was a self-made woman.

“I’ve always said that if my father wanted to privilege his children and make them tremendously wealthy, the easiest option would’ve been to grant oil rights or concessions or trading contracts in the oil sector. I haven’t built anything in oil,” she told Bloomberg in April.

But the “Princess,” as she was nicknamed in Luanda, didn’t need oil. There were other jewels in her crown: a 25 percent stake in Angola’s largest mobile operator, Unitel; part ownership of one of the country’s largest banks, Banco BIC; a 42.5 percent stake in its Portuguese counterpart, EuroBIC; and stakes in Portuguese telecom firm NOS and the recently launched Angolan brewing company Sodiba.

A crumbling empire. Oil may not have been central to dos Santos’s business empire, but her activities in the energy sector have led to serious allegations of fraud. In Angola, she has been charged with embezzlement and money laundering over alleged corruption at Sonangol, the country’s state-owned oil company, which dos Santos briefly chaired between 2016 and 2017.

Of particular concern is a deal in which Sonangol, under dos Santos, sold off a 40 percent stake in an offshore holding company to an entity owned by her husband, the billionaire art collector Sindika Dokolo. (Dokolo died in a scuba diving accident in October 2020.) The national oil company’s lawyers now claim the deal did not benefit Angola but served only to enrich the former first family.

This month, a Dutch court will rule on whether Angolan authorities can seize a stake in the Portuguese firm Galp Energia that is still linked to dos Santos’s family, while in Portugal authorities have nationalized her majority stake in Efacec Power Solutions, an electricity infrastructure company.

Dos Santos denies wrongdoing, saying the Luanda Leaks documents were falsified. “The truth will come out, I had the mission to ‘save Sonangol’ from the years of harmful management that left it bankrupt. Today there are those who want me to be the ‘scapegoat,’” she wrote in a September 2020 Instagram post.

International impact. Allegations against dos Santos have had international ripple effects. A tax practitioner resigned from global auditing firm PwC after the leaks exposed how the company allegedly made $1 million from projects connected to dos Santos.

The company told the ICIJ: “Since then, among other things, a number of senior employees have left PwC or been subject to other remedial measures.” Portuguese regulators are also investigating “the role of Portugal and of Portuguese enablers in the alleged corruption and money laundering schemes,” Karina Carvalho, executive director at Transparency International Portugal told Foreign Policy.

New regime, old tactics. When Isabel dos Santos’s father stepped down in 2017, he may have expected his hand-picked successor, João Lourenço, would allow his empire to survive.

Instead, the new regime cracked down on the dos Santos dynasty. Isabel dos Santos’s half-brother, Jose Filomeno, faces five years in prison for allegedly siphoning funds from Angola’s sovereign wealth fund; and younger sister Welwitschia “Tchizé” dos Santos was suspended from the party for “unjust enrichment” and claims her media company is being targeted by authorities.

But Angola’s rot ran far deeper than the dos Santos regime—earlier exposés have alleged the MPLA and the Angolan military have all benefited from the country’s wealth while most of its citizens live in poverty. Last year, the president refused to fire his chief of staff after he was implicated in corruption; when citizens protested, police responded with violence, a reminder of tactics from the dos Santos era.

Tip of the iceberg? As Africa’s richest woman, dos Santos attracted a slew of media attention—and so has her downfall. But this overshadows what her rise and fall represent: the role of global companies in the corruption that still plagues Africa.

“The Luanda Leaks investigation was never just about one city, one country, or one person. The investigation used leaked records—as well as months of on-the-ground reporting and data analysis—to expose how professionals, especially in Europe and the United States, made good money and ignored warning signs of possible financial wrongdoing,” said Will Fitzgibbon, a senior reporter at the ICIJ.

May 4 to May 13: U.S. Special Envoy for the Horn of Africa Jeffrey Feltman travels to Egypt, Ethiopia, and Sudan.

May 6: The International Criminal Court will sentence former child soldier-turned-commander of the Lord’s Resistance Army in Uganda Dominic Ongwen.

May 6: The United Nations Office for the Coordination of Humanitarian Affairs will hold a briefing on South Sudan.

Elite corruption in Nigeria. Investigators looking to uproot corruption in Nigeria should look to London real estate. Chatham House researchers have pointed to 800 properties owned by politicians in London and Dubai to trace illicit financial flows of up to $400 million dollars.

Most of these properties are held by families, shell companies, and other proxies, researchers said at a workshop aimed at training Nigeria’s forensic investigators. The British education sector has also become an attractive way to move illicit funds offshore under the guise of educating children in elite schools, according to a separate report by the Carnegie Endowment for International Peace published early this year. 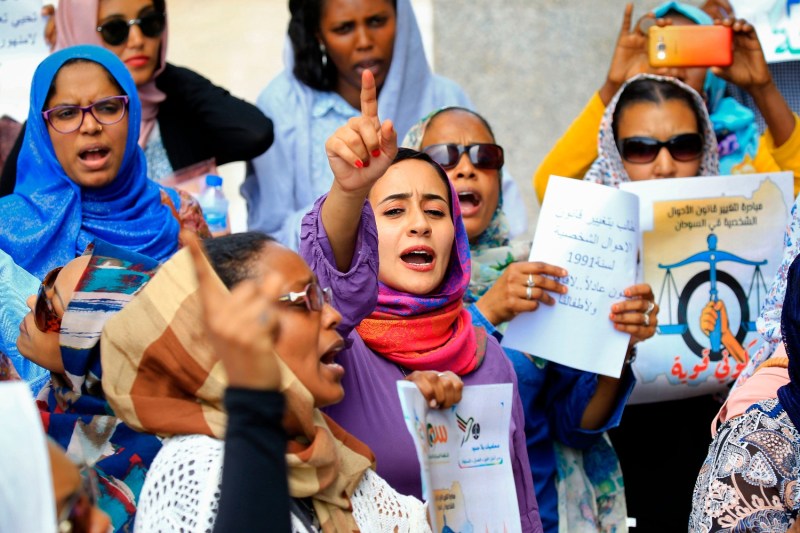 Women chant slogans during a demonstration calling for the repeal of family law in Sudan outside the Sudanese Ministry of Justice on International Women’s Day in Khartoum, on March 8, 2020.ASHRAF SHAZLY/AFP via Getty Images

Women’s rights in Sudan. Last week, Sudan finally ratified the United Nations’ 1979 Convention on the Elimination of All Forms of Discrimination Against Women. Yet, the majority male ruling transitional council still had reservations, refusing to endorse women’s equal rights in marriage and parenting.

Women were instrumental in the 2018 and 2019 mass demonstrations that led to the ousting of long-time leader Omar al-Bashir. However, women’s rights activists say the transitional government they helped usher in continues to curtail gender equality because it’s unwilling to challenge conservative norms and does just enough to appease the international community.

Zimbabwe’s questionable unemployment data. Despite a crumbling economy worsened by the pandemic, Zimbabwe recorded an official unemployment rate of only 6 percent, on par with the United States. Small to Medium Enterprises Development Minister Sithembiso Nyoni pointed to the large numbers of Zimbabweans making ends meet in the informal sector.

Where Nyoni saw resilience and self-reliance, observers say the country has failed to create jobs in a negative growth economy, and the unemployment rate is likely closer to 80 percent. The country has routinely misreported its unemployment figures in the past as the ruling party blames external forces for a failed economy.

Will Fela Kuti finally enter the Rock & Roll Hall of Fame? The Nigerian multi-instrumentalist and arguably Africa’s most influential musician may finally be recognized by the Rock & Roll Hall of Fame. Kuti has already been immortalized in the annals of African music, and his performances, musicianship, and political messaging have laid the foundation for a generation of musicians in Africa and abroad.

His fans, however, say the recognition from an institution that’s often slow to recognize the contributions of musicians of color is long overdue, if only to make sure his music travels even further and is heard by a broader audience.

American bass legend Bootsy Collins saw Kuti in Lagos while touring there with musician James Brown in 1970. “Fela would jump off the stage. He would sing. He would dance. Then he’d jump up on the keyboard. He was really deep,” he told Rolling Stone. “It was just mind-blowing.”

Will Eritrean troops leave Ethiopia? “It’s not going to happen,” wrote Seeye Abraha Hagos, a former Ethiopian defense minister and senior member of the Tigray People’s Liberation Front (TPLF), in Foreign Policy. “Eritrea’s involvement in the current war in Tigray is not a border or a national security concern. Instead, it is an opportunity for [Eritrean leader] Isaias [Afwerki] to unleash his wrath on his old enemy, the TPLF.”

Nelson Mandela in Cuba. The late South African president’s friendship with Cuban leader Fidel Castro is well documented. In the New Frame, former anti-apartheid activist Raymond Suttner draws attention to Mandela’s 1991 trip to the island soon after his release from prison. The visit left an indelible mark on Mandela, not only influencing his policies but also his stance during negotiations with the apartheid regime a few years later.

The hustlers of Nairobi. “Hustling in Nairobi is born of urban marginalization and underinvestment in infrastructure, resources, and jobs,” wrote Lewis Mwaura in Africa Is a Country. The repression of the city’s informal traders has even deeper roots, and by harassing vendors, Kenyan authorities are perpetuating a dark colonial legacy.