Everyone in Washington seems to be focused on China. But here are some brewing crises that could flare up when they’re not looking.

Welcome to Foreign Policy’s Security Brief. Happy Thursday! Before we get started, check out this amazing video of the Royal Marines’ futuristic new jetpack in action.

The highlights this week: Biden’s rearview mirror fills with foreign-policy crises, the Pentagon spots a freefalling Chinese rocket, and another battle erupts for the soul of the Republican Party.

Welcome to Foreign Policy’s Security Brief. Happy Thursday! Before we get started, check out this amazing video of the Royal Marines’ futuristic new jetpack in action.

The highlights this week: Biden’s rearview mirror fills with foreign-policy crises, the Pentagon spots a freefalling Chinese rocket, and another battle erupts for the soul of the Republican Party.

Every president comes into office with grand plans for a foreign-policy agenda. And then reality hits, and crises flare up seemingly out of nowhere. George W. Bush came into office advocating a less interventionist foreign policy—and then 9/11 happened. Few could have foreseen Donald Trump’s last year in office being consumed by a pandemic.

So what are the big looming meltdowns that Joe Biden could face and ones that might be in (most of) Washington’s blind spot? For the past several weeks, we’ve been asking national security officials, experts, and other Washington insiders about what brewing trouble spots are keeping them up at night. Here’s the rundown:

A potential collapse in Ethiopia. Several U.S. officials we’ve spoken to have drawn a comparison between Ethiopia and Yugoslavia in 1992, just before it collapsed and sparked a series of wars and gruesome ethnic cleansing campaigns. An imperfect analogy, but it underscores how worried some in Washington are about the stability of East Africa’s most populous state, particularly in the wake of the conflict in Tigray and brewing tensions between the country’s Oromia and Amhara regions.

Biden’s new special envoy for the Horn of Africa, Jeffrey Feltman, told us that a collapsing Ethiopia could make Syria look like “child’s play”—Yugoslavia’s prewar population was some 23 million, around the same as Syria’s before its civil war. Ethiopia’s population, by comparison, is 110 million.

Some in the Biden administration are watching the country closely, but for the rest of the national security world, consumed by the withdrawal from Afghanistan and the pivot to great-power competition with China, it’s a blind spot that could flare up at any point.

Lebanon is falling down. Lebanon, like its neighbor to the south, is in serious trouble, facing a dire cash crunch and electricity shortages that could leave the country in the dark later this month. And Syria’s Bashar al-Assad regime is making things harder on the Lebanese government, the U.S. State Department revealed in a finding last year, by pushing up exchange rates and helping Iran-backed Hezbollah apply pressure.

But after last August’s port blast, which killed more than 200 people and raised renewed concerns about corruption and Lebanon’s political fragility, the international community has been running out of patience. Any instability in Lebanon could quickly spark ripple effects across an already unstable region, threatening Israel’s security and the safety of the nearly 2 million refugees who have sought shelter in Lebanon.

A worsening crisis in the Sahel. The United States, France, and regional governments have been slogging it out against terrorism groups in the Sahel region of West Africa for years, with—at best—mixed results as terrorist groups gain stronger footholds and increase the scale and scope of their attacks.

Western powers relied on Chad’s longtime ruler, Idriss Déby, for support, as Chad had the most effective army in the region to combat terrorist groups. But Déby died last month, and while his son has taken over, Déby’s death has left a potential power vacuum and risk of deepening political instability that could quickly spiral.

Though Trump’s sanctions are still under review (like a lot of things in the new administration), Biden doesn’t appear ready to loosen the screws, even though a White House official told Reuters that Maduro has been “sending signals” to the United States after allowing the World Food Program into the country and releasing six former CITGO employees.

Another collapse in Libya. Since the downfall of longtime Libyan ruler Muammar al-Qaddafi in 2011, Libya has been wracked by constant violence and evolved into a proxy war for competing powers in the Middle East and Europe, including Turkey, Qatar, the United Arab Emirates, and Russia. Libya’s first unity government was sworn in in March, providing the first glimmer of hope for bringing the fractured country together in a decade.

But the new government is still weak and fragile, and if it collapses, the country could be back to square one. Violence in Libya has exacerbated Europe’s refugee crisis, provided a breeding ground for extremist groups, and exported instability to other parts of Africa, including the Sahel.

Tuesday, May 11: Ceremonial opening of a new session of British Parliament begins with a speech from Queen Elizabeth.

Wednesday, May 12: Russian Foreign Minister Sergei Lavrov and U.N. Secretary-General António Guterres will meet in Moscow to discuss the conflicts in Ukraine, Syria, and Libya.

Vaccine diplomacy. The Biden administration has signaled it will support waiving intellectual property rules for COVID-19 vaccines, the top U.S. trade official said on Thursday. But the move—which is being protested by large U.S. pharmaceutical companies—may not help countries suffering from the coronavirus in the short term, such as India, which the United States has already aided with materials for vaccine production. 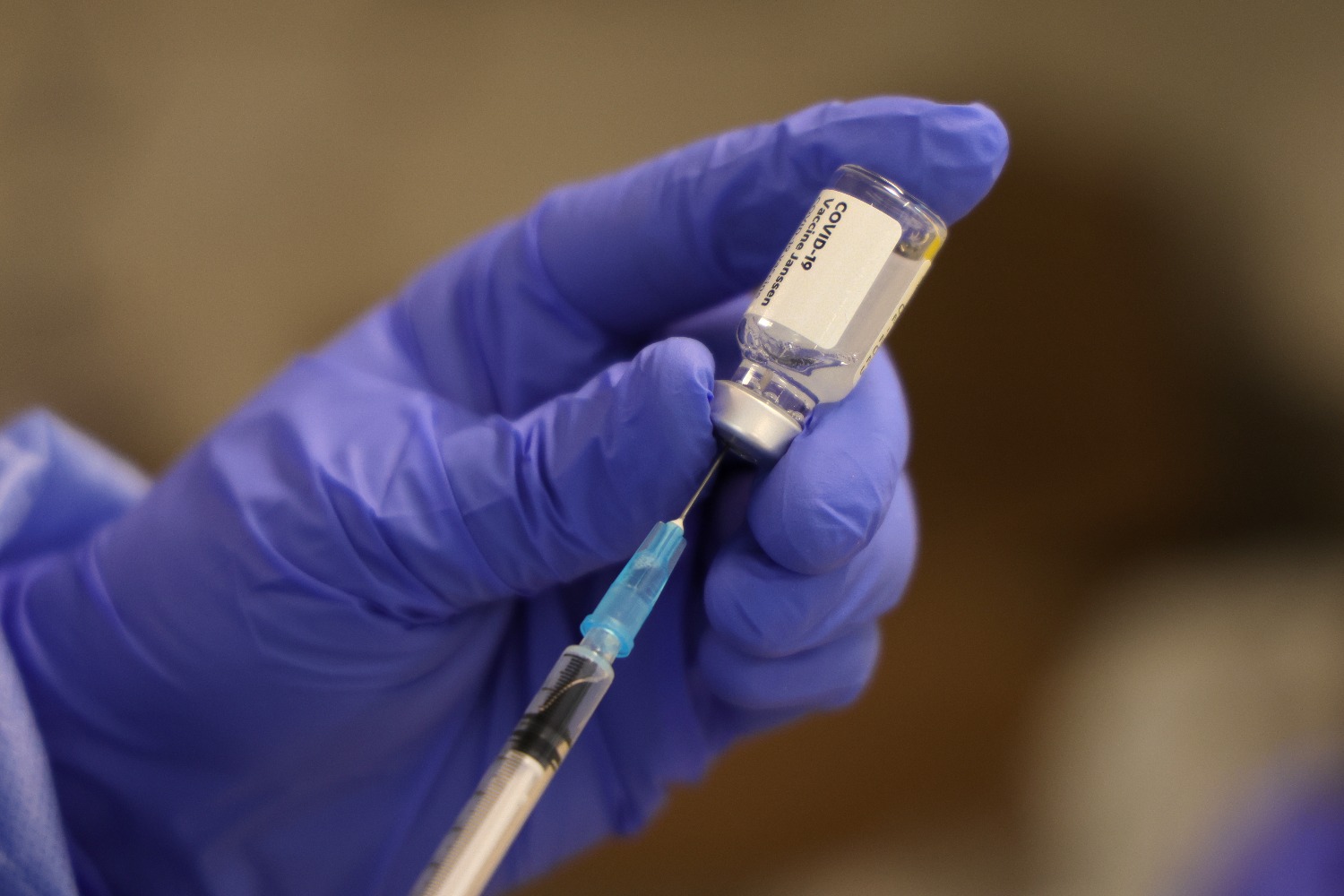 A medical assistant prepares a syringe of the Johnson & Johnson COVID-19 vaccine in a mobile vaccination bus in Cologne, Germany, on May 6.Andreas Rentz/Getty Images

Freefalling. The U.S. Defense Department is tracking an out-of-control Chinese space rocket that’s set to come back down to Earth over the weekend. But it’s not your average launch—officials are not entirely sure where the debris will land because the speed at which the projectile is traveling, combined with the rotation of the Earth, can throw off calculations. And the Pentagon says it has no plans to shoot it down.

Family affair. Things are about to get even more awkward in the House Republican caucus, as pro-Trump members are preparing a resolution to oust Rep. Liz Cheney, the third-ranking GOP member, from her spot in the party’s leadership.

Cheney, the daughter of former Vice President Dick Cheney, has been critical of former President Donald Trump for his role in inciting deadly riots at the U.S. Capitol on Jan. 6. Cheney’s ouster would knock off a hawkish foreign-policy voice within the Republican caucus: She has expressed support for the Israeli annexation of parts of the West Bank and has been a harsh critic of the Iranian regime.

Trump-backed Rep. Elise Stefanik of New York, who once campaigned as a moderate before becoming a staunch defender of Trump during his first impeachment, is likely in line to take over the job. (Critics have noted that Cheney scores far higher on conservative voting metrics.)

“They’re on their knees for Trump, and she’s standing up for herself. And that’s kind of an embarrassing thing if you’re the guy on your knees.”

—Former Rep. Barbara Comstock, a Virginia Republican, speaks to the Hill newspaper on the fight to boot Liz Cheney from Republican leadership in the House

Stiff upper lip. Australian officials are engaged in a war of words with Chinese officials, upset with Beijing’s growing economic and political coercion. Jack and FP’s Keith Johnson report that Australia is increasingly becoming a test case for how to stand up to China, as Beijing has continued to try to punish Canberra with tariffs and military buildups to test its mettle.

“It’s not just about Australia,” said Heino Klinck, who was the U.S. deputy assistant secretary of defense for East Asia until January. “It’s just that the Chinese have decided if they can put the Aussies back into a box, that sends a message to everyone else.”

We feel the same way. “Even the CEO of Zoom says he has Zoom fatigue” via Report Wire.