Social media is serving as a proxy for a collapsing public health system. That isn’t good news for Modi and the ruling party.

The highlights this week: Social media stands in for an absent state amid India’s coronavirus crisis, U.S. troops begin their final withdrawal from Afghanistan, and Biden mulls the mayor of Los Angeles as the potential next U.S. ambassador to India.

The highlights this week: Social media stands in for an absent state amid India’s coronavirus crisis, U.S. troops begin their final withdrawal from Afghanistan, and Biden mulls the mayor of Los Angeles as the potential next U.S. ambassador to India.

India’s catastrophic coronavirus crisis shows no signs of abating. Although new daily cases have decreased slightly in the last few days, following a high of nearly 402,000 on April 30, daily death figures have continued to break records. And India has surpassed 20 million total cases, an unfortunate milestone that only the United States had passed until now.

A common refrain among Indians now is that the state and especially the public health system are missing in action. This week, CNN reported from inside a COVID-19 ward in Uttar Pradesh, showing acutely ill people lying on the floor after waiting in vain for oxygen supplies to arrive. Although several senior officials have acknowledged the overburdened health system, many government authorities—including India’s health minister—have downplayed the crisis, including asserting that there are no oxygen shortages.

With nowhere else to turn, Indians have taken to using social media—and particularly Twitter—as a proxy for a collapsing health system, filling up news feeds with requests for help. On social networks, doctors issue urgent appeals for oxygen, and people use the hashtag #SOS to send out desperate calls for ventilators, beds, and medicine for family, friends—and even themselves. Given the scale of the surge, many requests can’t be heeded in time, leaving posts behind that resemble obituary pages.

The problem with relying on social media in a crisis is that, like India’s weakened health infrastructure, its reach is limited. Many analysts, including FP’s Ravi Agrawal, have highlighted rapidly increasing internet penetration in India. But just 32 percent of India’s population uses social media, and only a fraction of Indians use Twitter—about 15 million, according to government data. WhatsApp, with 410 million users, is India’s most-used social media platform. Although some urgent medical requests are conveyed on WhatsApp, it has also become a key spreader of disinformation about COVID-19.

Additionally, there are particular inequalities at play on Twitter. Information can spread widely and rapidly on the platform, but those with fewer followers don’t get as much traction as those with more prominent profiles. Fortunately, some influential accounts in India have helped amplify those with less reach. Extensive media coverage of the crisis has also brought global attention to the situation. Indian diaspora groups in the United States and beyond have also launched campaigns for relief and supplies.

Many Indians have quickly secured assistance online that they couldn’t get otherwise, and some heroes have emerged in the crisis. B.V. Srinivas, a cricketer-turned-politician who heads the youth wing of the opposition Indian National Congress, leads a volunteer team responding to Twitter pleas and has assisted ordinary Indians, soldiers, and even foreign diplomats. Umang Galaiya, a software designer in Bengaluru, developed a website that helps Twitter users locate supplies in their city. He told Foreign Policy that the site received 1.5 million page views during its first 10 days.

The number of Indians seeking health care via tweet, like India’s coronavirus crisis on the whole, has put a beleaguered government on the defensive by throwing its limited response into sharp relief. The phenomenon also threatens to undermine the reputation of the ruling Bharatiya Janata Party (BJP) for social media savviness—a long-standing strength in its political campaigns. Led by Srinivas, some opposition members are sharing pictures depicting their relief efforts while taking potshots at the government.

The BJP government isn’t helping to improve these optics. It has asked Twitter to remove some criticism of its pandemic response, and External Affairs Minister S. Jaishankar became embroiled in a Twitter spat with Congress leader Jairam Ramesh about opposition members sending oxygen to foreign embassies. The change from Jaishankar’s predecessor, the late Sushma Swaraj, who frequently used Twitter to communicate with Indians seeking government assistance overseas, is striking.

Potential blows to Prime Minister Narendra Modi’s popularity shouldn’t be overstated. The BJP still has large bases of support, and it is advantaged by an otherwise weak opposition. But Modi is facing his most serious political challenge in his seven years as prime minister. The BJP’s loss in recent state elections in West Bengal, where Modi himself campaigned heavily, underscores the myth of his political invincibility.

Over the years, Modi and his party have perfected the use of social media to communicate with supporters, showcase achievements, and seek votes. Studies show this has helped the BJP win. Congress trying to beat it at its own Twitter game is bad news for the ruling party.

May 10: Nepalese Prime Minister K.P. Sharma Oli faces a vote of confidence in a bid to push through new elections.

May 13: Carnegie India hosts the virtual launch of Tiananmen Square: The Making of a Protest—A Diplomat Looks Back, a new book by former Indian Foreign Secretary Vijay Gokhale.

May 13: Muslims in South Asia observe the Eid al-Fitr holiday.

A regionwide pandemic surge. Meanwhile, other South Asian countries, including some of India’s immediate neighbors, are seeing major spikes in new cases. Nepal broke its single-day record on May 3 with 7,388 new cases and 37 deaths. Sri Lanka saw a new record on April 29, with nearly 1,500 new cases. Pakistan, meanwhile, has vaccinated only 2 million of its 220 million citizens. Bangladesh saw infection rates rise to 23 percent last month.

Unlike in India, lockdowns, bans on large events, and travel restrictions are credited with preventing things from getting worse so far. But India’s crisis poses a continued threat to its neighbors. The World Health Organization estimates that the highly infectious variant fueling its surge has been found in at least 17 countries, including Belgium and the United States. It could quite easily end up in India’s backyard.

Pullout underway in Afghanistan. U.S. forces have begun their final withdrawal from Afghanistan, scheduled to conclude by Sept. 11. Despite Taliban threats to attack U.S. soldiers remaining beyond the previously agreed May 1 deadline, U.S. forces have so far not faced significant violence from the insurgents. An exception came on May 1, when Taliban fighters fired rockets into a facility housing U.S. troops in Kandahar. The munitions landed on the Afghan side of the base, and there were no casualties.

U.S. officials are likely in touch with Taliban leaders to urge them not to target U.S. forces, given the withdrawal timeline. On April 30, Afghan media reported that Zalmay Khalilzad, the U.S. special representative for Afghanistan reconciliation, met with senior Taliban figures in Doha, Qatar. But the next day, a Taliban spokesperson once again threatened to target U.S. troops, indicating that the group’s leaders are still conferring about how to proceed.

Al Qaeda vows to strengthen Taliban ties. Last Friday, CNN published excerpts of an interview with two members of al Qaeda in the Indian Subcontinent (AQIS), al Qaeda’s South Asia chapter, disclosing that it retains close ties to the Taliban in Afghanistan. This doesn’t violate the 2020 U.S.-Taliban accord, which only stipulates that the insurgents prevent al Qaeda from using Afghan territory to threaten U.S. targets.

It does undermine the dubious assumption of anyone who thinks that the Taliban can help the United States pursue its counterterrorism goals in Afghanistan, especially after U.S. forces have departed. The AQIS members also boasted of their continued ties with the Afghanistan-based Pakistani Taliban, a once-fearsome group that has showed recent signs of a comeback. Last month, it staged an attack on a luxury hotel in Quetta, Pakistan.

Ten years after the U.S. killing of Osama bin Laden, al Qaeda is a shadow of its former self, but its links to the two Talibans serve as a reminder of its continued significance.

Biden mulls new India envoy. Axios reported on Tuesday that U.S. President Joe Biden is considering Eric Garcetti, the mayor of Los Angeles, for the post of U.S. ambassador to India. Many senior India-focused positions in the administration remain vacant, which may have contributed to its slow response to India’s coronavirus crisis. Garcetti is a close Biden ally who served as a co-chair of his presidential campaign. 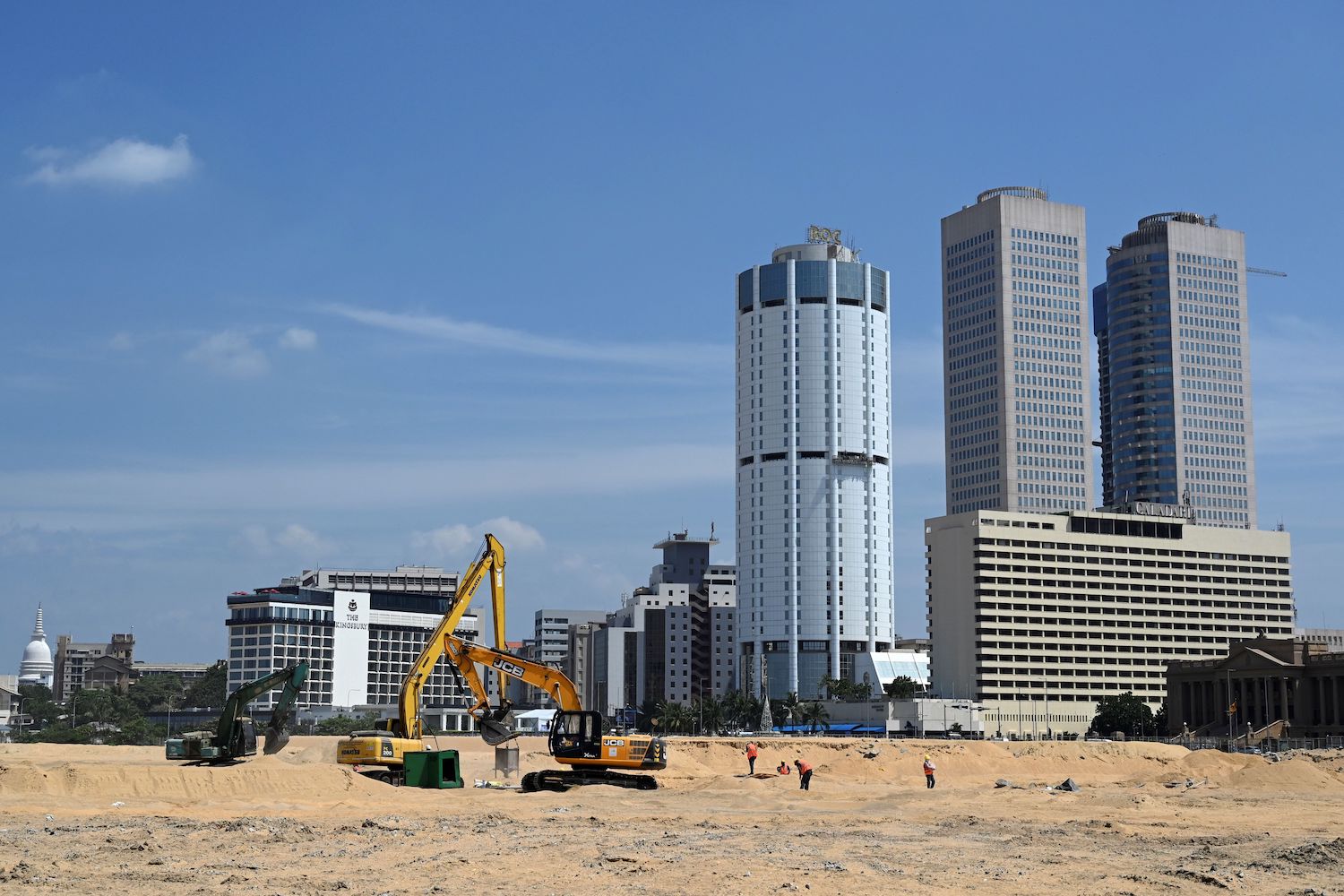 A port development plan in Colombo, Sri Lanka’s capital, has become a lightning rod for criticism about Chinese influence in the island nation, a key destination for Belt and Road Initiative projects. China is already developing Colombo’s port, but the Sri Lankan government has now introduced a new bill that establishes a commission to attract investment for a nearby proposed financial district featuring shopping malls and 21,000 apartments and homes.

Political and civil society opponents say the bill, which sets up a commission with a board to include foreign nationals, is unconstitutional, with some suggesting the port city will become a “Chinese colony.” On Tuesday, Sri Lanka’s Parliament announced it would suspend debate on the bill until the Supreme Court conveys to the legislature its views on the bill’s constitutionality.

Chinese investment in Sri Lanka, while welcomed by many, including the government, is a sensitive matter. In 2017, Colombo handed over another port, in Hambantota, to Beijing as part of a debt swap. The decision sparked concern in India: It was the second case in which China used port investments to spread its influence in India’s backyard, after Gwadar Port in southern Pakistan.

“The risks of the U.S. withdrawal have been widely propagated in the news media, but we see little serious discourse about the opportunities it presents.”

—Afghan President Ashraf Ghani, writing in Foreign Affairs about how to advance the peace process in Afghanistan

Salman Masood, an editor at the Nation and the New York Times’ Pakistan correspondent, laments how Pakistani civil servants increasingly use social media to seek “personal glory.” He argues that the tendency to “constantly seek self-validation” should be checked, calling on the government to issue new social media regulations for bureaucrats.

A Kathmandu Post editorial decries how Nepal’s government and opposition are too busy sparring and engaging in “political maneuvering” to address the country’s coronavirus surge. “If Prime Minister Oli and his company of demagogues have blood on their hands, the principal opposition … are partners in crime as well,” it argues.

Mustafizur Rahman, a distinguished fellow at the Centre for Policy Dialogue in Bangladesh, writes in the Dhaka Tribune that remittance flows are likely to decrease in the near future in part due to the pandemic, which has resulted in fewer Bangladeshis going abroad to work. Remittances are a major contributor to Bangladesh’s economic growth.