The ANC descends into infighting again as it tries to suspend top officials facing corruption charges.

This week’s highlights: The African National Congress descends into infighting again in South Africa, the International Criminal Court sentences a former child soldier from Uganda, and the EU pulls election observers from Ethiopia.

This week’s highlights: The African National Congress descends into infighting again in South Africa, the International Criminal Court sentences a former child soldier from Uganda, and the EU pulls election observers from Ethiopia.

The ANC’s Attempts at Accountability Lead to Chaos

In the last decade, South Africa’s liberation movement-turned-ruling party, the African National Congress (ANC), has been tainted by corruption scandals. In a bid to regain the moral high ground, the party of Nelson Mandela has struggled to hold senior members accountable. Over the last week, the party’s latest attempts to do so exposed chaotic infighting and just how far the ANC’s competing factions have pulled the movement apart.

Step aside. Last week, the ANC moved to suspend party Secretary-General Elias Sekgobelo “Ace” Magashule, who has been at the center of multiple corruption allegations. The suspension was the culmination of months of public discussion, and perhaps years of behind-the-scenes wrangling, on the so-called “step aside” rule.

At the party’s 2017 conference, which saw the election of Cyril Ramaphosa as party president, members raised the issue of whether those under investigation for corruption and other criminal activity should step aside from their roles in the party.

It was only in May of this year, after a corruption scandal had disrupted the country’s response to the COVID-19 pandemic, that the party finally decided to implement the rule, suspending anyone who did not step aside within 30 days of being criminally charged.

Its first major test would come against one of the party’s most powerful figures. First, Magashule ignored the ruling by the party’s own integrity commission that he must step aside, continuing to serve in his role as one of the ANC’s top six officials while appearing in the dock.

Even as former South African President Thabo Mbeki cautioned that Magashule’s continued role as secretary-general would destroy the party from within, Magashule remained defiant. He and his supporters disrupted the virtual meeting in March where the new rule was under debate and continued to sow chaos, even as the party moved to suspend him this week.

Ace in the hole. Magashule was arrested and released on bail last November and faces 21 graft charges, linked to a $23.5 million contract to remove hazardous asbestos roofing in the Free State province. Magashule, a former premier of the province, is linked to the alleged fraudulent awarding of the contract, along with five other companies. Magashule and the supporters who have gathered around the Bloemfontein court hearing the case have insisted on his innocence.

As the people who were meant to benefit from the contract began to show symptoms of asbestos poisoning, the ANC finally suspended Magashule pending the outcome of the trial. Magashule has openly fought his suspension, signaled by an image he tweeted of himself playing chess that was roundly mocked by chess grandmaster Garry Kasparov.

In a tit for tat, Magashule moved to suspend Ramaphosa over corruption allegations mounted against the latter’s election campaign. He went further and lifted his own suspension on the basis that he was appealing the decision. Defiantly, he then logged on to the ANC’s virtual national executive committee meeting over the weekend, only to be kicked out, prompting further division.

Factional battles. While Magashule’s support in the national executive committee is limited, his ability to whip up disgruntled local branches—the grassroots level of the party—poses a continued threat. Magashule’s supporters see his suspension as an attempt by Ramaphosa to weaken opposing factions, once powerful during the Jacob Zuma era.

In an interview, Magashule accused the party of politicizing issues like radical economic transformation, the country’s policy position on Israel, and even the acquisition of the Russian COVID-19 vaccine.

The national executive committee has demanded that Magashule apologize and accept his suspension or face expulsion. In a move seen as a victory for Ramaphosa, the committee reportedly sees the suspension as “fundamental to the party’s renewal.”

Pundits say Ramaphosa will now be able to implement a reform agenda that will pull the party and the country’s economy out of the doldrums. But that optimism is based on the assumption that Magashule is the only challenge the party faces. In truth, the disagreement over Magashule’s fate is just one of the many issues dividing the party. And while the ANC tries to hold itself together, South Africa is slipping deeper and deeper into economic and social malaise.

May 10-14: Mozambique’s defense minister, Jaime Neto, travels to Portugal, where discussions will include a cooperation agreement to fight the insurgency in Mozambique’s north.

May 17-18: France holds a conference to drum up international support for Sudan and Africa’s economic recovery. 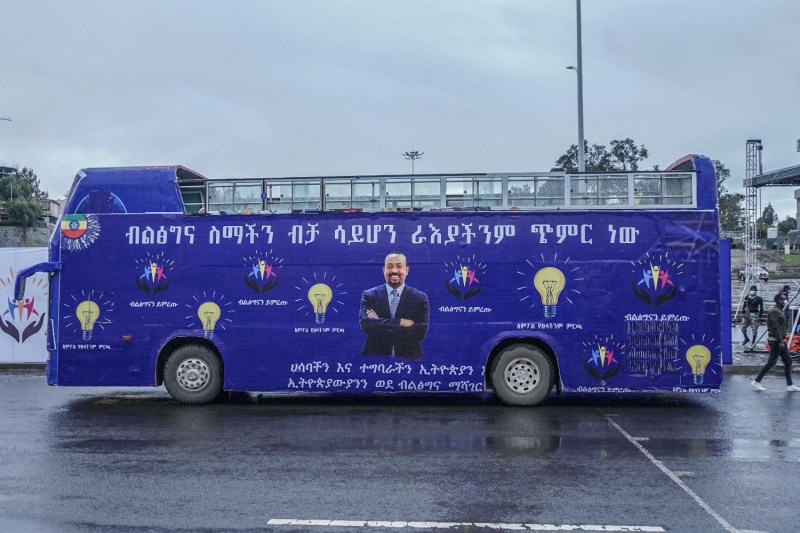 Ethiopia’s upcoming election. Ethiopia is set to hold parliamentary elections on June 5 amid the COVID-19 pandemic and the ongoing conflict in the Tigray region. Last week, the European Union pulled its observers, citing the Ethiopian government’s failure to agree on certain parameters.

On April 29, five Democratic U.S. senators urged the U.S. special envoy for the Horn of Africa, Jeffrey Feltman, to pressure Ethiopia to delay the election until Prime Minister Abiy Ahmed fulfills his commitments regarding an Eritrean withdrawal from Tigray.

While Addis Ababa hit back at the EU, electoral officials conceded that voter registration was proving more difficult than anticipated. Last week, Ethiopian security officials announced they had foiled a plot by an “extremist diaspora” to disrupt the election, underscoring the contentious security context. Ethiopia was meant to hold elections last August but delayed them due to the pandemic. The Tigray region’s decision to go ahead with a vote helped spark the current conflict.

Former child soldier sentenced. The International Criminal Court (ICC) has sentenced the former rebel commander Dominic Ongwen to 25 years in prison. Ongwen was abducted by the Lord’s Resistance Army as a boy in Uganda and forced to fight, but he also built a fearsome reputation and rose to the rank of commander.

In explaining the sentence, the court noted that Ongwen “wilfully and lucidly brought tremendous suffering upon his victim … [but also] … previously endured extreme suffering himself.” Ongwen was found guilty of murder, rape, torture, and other crimes this February. During his own defense, Ongwen cited his trauma as an abductee.

Ancient burial. Archaeologists have identified a roughly 80,000-year-old burial site in Kenya, further helping researchers to understand how cultural practices around death developed among early humans. The bones, determined to belong to a child about 3 years old, are arranged in a way that suggests the body was carefully placed and possibly wrapped in a shroud with the head on a pillow and purposely covered with soil.

“Early African burials are especially rare despite the fact that Africa is the birthplace of our species,” said Nicole Bovin, one of the lead investigators. “This almost certainly reflects biases in where research has been done.”

The economic fallout of the COVID-19 pandemic is still being calculated, but a survey by Gallup shows that low-income or lower-to-middle income countries were worst affected. In the African countries surveyed, more than half said they had to temporarily stop working in 2020—an average of 64 percent in sub-Saharan Africa and 56 percent in North Africa.

Remittances in reverse. There are myriad apps to send remittances to Africa, but few are able to send money in the other direction. While the demand to transfer money abroad is still relatively low, in a financially interconnected world it’s only a matter of time before such demand increases—whether that money is to purchase goods or to support relatives studying abroad.

That’s why the recently launched Lemonade Finance has already invested in the infrastructure. The app is helping Nigerians to send money to the United Kingdom, as well as to Kenya, Ghana, and Canada. The app’s strength is its low fees, making it an affordable alternative to other methods of sending money from the continent. The high cost of transfers remains a barrier for many people in Africa.

What’s more interesting is how the Toronto-headquartered app has found a way to work around a homegrown barrier. Regulations passed by the Central Bank of Nigeria made 2021 a very difficult year for fintech start-ups, with some freezing mobile money transfers in the country altogether. Lemonade’s response was to work with a local partner that already had the requisite licenses that comply with the central bank’s still evolving rules and has a relationship with the regulator.

Still, the app’s long-term success in contributing to Nigerians’ financial access to global markets will largely depend on what co-founder Ridwan Olalere described as ongoing “dialogue” with authorities, as fintech companies navigate the geographic and capital restrictions of the new microfinance laws.

Nigeria’s president should resign. Kovie Biakolo argues in Foreign Policy that, after years of promising—and failing—to bring security to Nigeria, Muhammadu Buhari is not the man to lead the country: “Buhari has shown that he has neither the skill nor the courage nor the will to lead a country as complex as Nigeria.”

A lesson for My Octopus Teacher. The Netflix documentary “rode a tide of the feels” to Oscar victory, but if My Octopus Teacher is to have a lasting positive impact, it must empower marginalized South Africans in the country’s growing film industry, Liani Maasdorp and Ian-Malcolm Rijsdijk, both lecturers at the Centre for Film and Media Studies at the University of Cape Town, write in Quartz Africa.

Correction, May 12, 2021: Tanzanian President Samia Suluhu Hassan traveled to Kenya for a two-day state visit last week. An earlier version of this article incorrectly stated that she would visit on May 11-12.