Biden wants to solidify the pivot to Asia. Congress might have other ideas.

Here’s what’s on tap for the day: A preview of Biden’s massive Pentagon budget plans, the latest on the Gaza crisis, and news on nominees for Pentagon and State Department posts.

Here’s what’s on tap for the day: A preview of Biden’s massive Pentagon budget plans, the latest on the Gaza crisis, and news on nominees for Pentagon and State Department posts.

Each year, the president and Congress (with lobbyists and contractors cheering and jeering from the sidelines) go through a monthslong political tussle of how and where to spend some $715 billion on defense. The opening salvo is expected soon as administration officials and other Washington insiders tell us U.S. President Joe Biden plans to release his Pentagon budget proposal in the coming weeks—a process that started under the Trump administration.

Reading the tea leaves: Three things to watch. In our inaugural SitRep, we’ve got a handy cheat sheet for you on what to watch in the defense budget. Feel free to steal our ideas for your first post-vaccine happy hours to sound smart when defense appropriations casually come up in conversation.

1. China, China, China. No surprise here, the Pentagon budget is expected to reflect the massive shift that Biden is making to pivot the U.S. military away from the Middle East and toward China.

What to watch: The Pacific Deterrence Initiative. It’s a huge new(ish) fund meant to bolster the U.S. military’s presence in the Indo-Pacific to match China’s breakneck build up of naval forces—and to build up missile defenses near U.S. bases in the region, such as Guam, which Beijing could target with an increasingly capable rocket force.

The numbers behind it: Indo-Pacific Command has asked for $27 billion for the fund over five years, and the program has strong backing from powerful lawmakers. Whether Biden proposes to match that number, undercut it, or overshoot it will say a lot about his strategic military goals in the Pacific.

2. Go Navy. Beat Army. There’s a general consensus among defense experts we’ve spoken to that the Navy stands to make big gains in the pivot to China while the Army stands to lose. It’s a simple matter of geography: A lot of the grand maneuvering and signaling to China (backing allies, military exercises, and freedom of navigation operations) will be in the Pacific Ocean, not on land.

The thing to watch: The size of the fleet. Biden, who faces pressure from the progressive flank of his party to cut defense spending, is likely to scuttle Trump-era plans for a 500-ship Navy. What’s still unclear is whether Biden’s budget plan will protect the slightly less ambitious plan from Congress for a 355-ship Navy, which lawmakers from powerful shipbuilding states on the Eastern seaboard have long called for.

The numbers behind it: The 500-ship Navy plan could cost $1 trillion over 30 years. Top Navy officials say under the current budget, it can only support 300 to 305 ships. Expect a lot of pushback from hawks in Congress if Biden’s Pentagon budget doesn’t look like it has plans to make up the difference.

3. Planes and nukes. Senators who grilled Biden’s top defense nominees during their confirmation hearings earlier this year made sure to hem them in on one thing: preserving and updating the nuclear triad. Many also have strong opinions about the military’s flagship fifth generation fighter program, previewing some budget battles to come. Let’s explore:

F-35 dive: The Biden administration is sticking to the plan with the troubled F-35 fighter jet program…for now. Bloomberg reported today the Pentagon will ask Congress for $11 billion for 85 more F-35 jets, but they will face increased scrutiny from top lawmakers like House Armed Services Committee chairperson Adam Smith, who has called on the Pentagon to find ways to cut losses on troubled weapons programs. 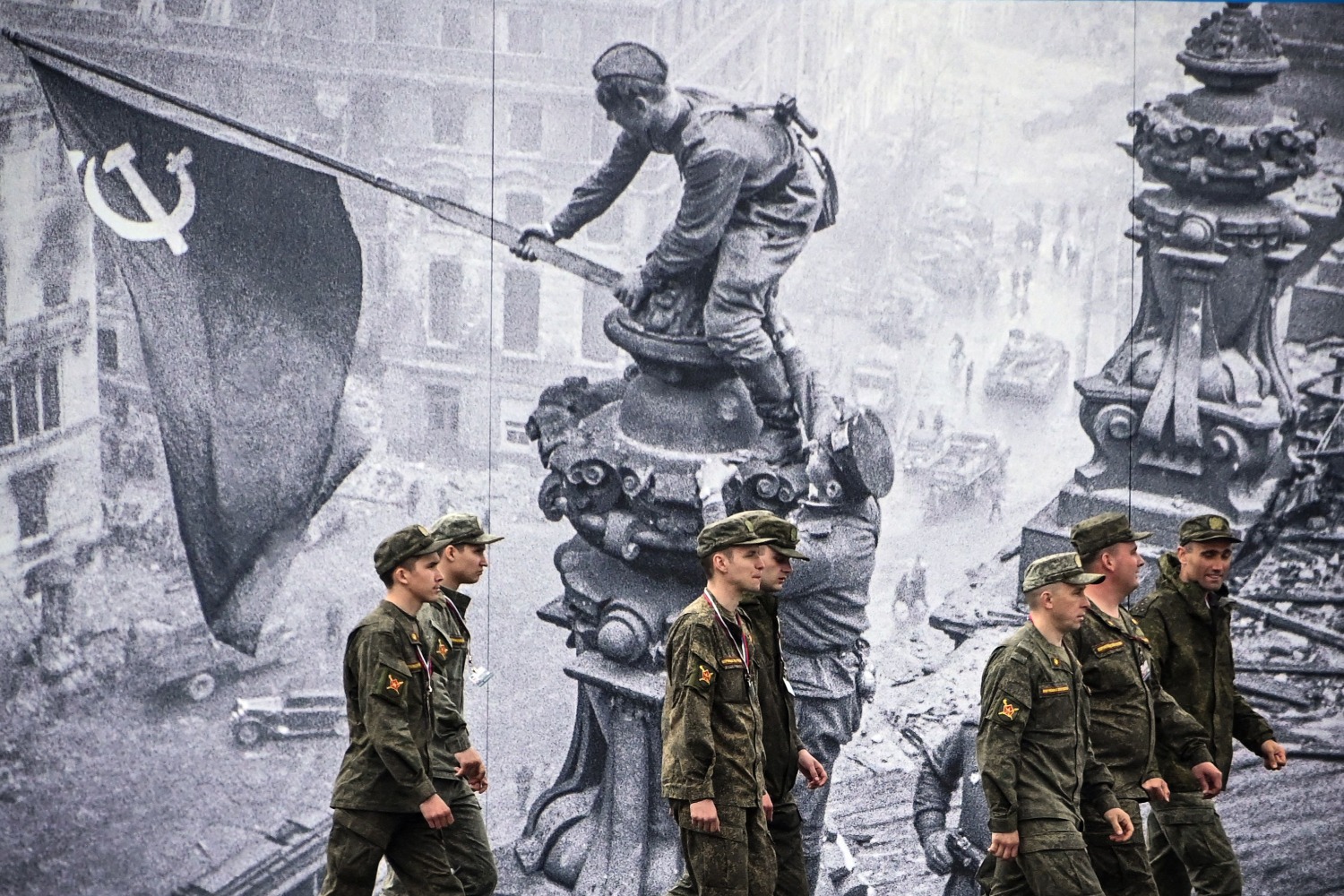 Russian army service members walk past decorations on the Red Square in Moscow ahead of the 76th anniversary of the victory over Nazi Germany during World War II, on May 6.Alexander Nemenov/AFP via Getty Images

U.N. moves. A top U.N. diplomat, Martin Griffiths, is leaving his post as envoy for Yemen to be the U.N.’s top humanitarian relief czar, as our colleague Colum Lynch reports.

Pentagon onboarding. Chidi Blyden, a veteran of the House Armed Services Committee and the Obama administration, started as deputy assistant secretary of defense for African affairs earlier this month. Warren Bass has also come aboard as director of speechwriting, and Rachel Ross will be chief of staff to the secretary of the Army; Biden’s nominee Christine Wormuth faces her confirmation hearing today in front of the Senate Armed Services Committee.

Korea Command. The Senate Armed Services Committee is scheduled to hold a nomination hearing for Gen. Paul LaCamera to be the next commander of U.S. Forces Korea next week.

On the diplomatic front. Biden’s picks to be the top State Department envoy for Latin America, Brian Nichols, and the top envoy for international organization affairs, Michele Sison, face confirmation hearings before the Senate Foreign Relations Committee next week.

A brief rundown on your need-to-know national security news of the week.

A new Gaza war? An explosion of violence between Israeli security forces and Palestininian militants continues to escalate as Israel mulls plans for a ground invasion of Gaza. The crisis has left the Biden administration in a bind on the world stage, as FP reported this week.

It’s hard to say goodbye. Defense officials are pledging to keep a limited troop presence in the general vicinity of Afghanistan for counterterrorism operations after the full withdrawal by September but aren’t giving any specifics on what that will entail—at least publicly. U.S. Central Command announced this week its withdrawal from Afghanistan was 6 to 12 percent complete.

Excerpts from interviews with the people driving national security.

Democratic Sen. Chris Murphy, a prominent progressive voice on foreign policy, spoke to reporters earlier this week after he wrapped up a tour of the Middle East with senior Biden officials. One focus was the war in Yemen, where Iran-backed Houthi rebels are fighting a Saudi-led coalition in a protracted civil war, but he covered the waterfront. Here’s what he said:

On prospects for a two-state solution: “Once we have a clearer handle on both Palestinian and Israeli leadership, I expect the Biden administration will take an active role in trying to prompt talks about a future with two states in the region. But we are saddled with the here and now. And our focus today needs to be on convincing both sides to take steps toward de-escalation.”

On dialogue with Iran: “Having a dialogue with the Iranians that would come through a restart of the [Iran nuclear deal] would be helpful with respect to the path forward in Yemen. … If you want to be working on peace in Yemen, you have to be talking to both the Saudis and the Iranians.”

On the United Arab Emirates: “I remain concerned about the fact that, while we have significantly changed our defense relationship with Saudi Arabia, we are actually proposing to dramatically increase our defense cooperation agreement with the Emiratis, including selling them weaponized Reaper drones, which could end up being used inside Yemen.”

Friday, May 14: Gen. Paul Nakasone, commander of U.S. Cyber Command and director of the National Security Agency, is scheduled to testify before the House Armed Services Committee.

Tuesday, May 18: The House Foreign Affairs Committee will hold a hearing with Zalmay Khalilzad, Biden’s envoy for Afghanistan peace negotiations, on the U.S.-Afghanistan relationship after the military withdrawal.

This Washington Post profile on Army Capt. Kristen Griest, one of the first women to pass Ranger School.

Your roundup of this week’s weirdest news.

Advice to live by. Amid a cyberattack on a gas pipeline, officials are warning Americans: “Do NOT fill plastic bags with gasoline,” per KRON4 News.

I guess not all puncture wounds are bad. The castle said to be the setting for Count Dracula in Romania is now offering free COVID-19 vaccinations in a bid to get more tourists to Transylvania, per Reuters.