A survey of academics shows early and overwhelming support for the U.S. president, but he will be tested by China, Russia, and national security issues.

In late April, the Teaching, Research, and International Policy (TRIP) project at William & Mary’s Global Research Institute, with the support of the Carnegie Corporation of New York, surveyed IR scholars at U.S. colleges and universities on Biden’s foreign-policy performance during his first 100 days. The results we report below are based on responses from the 812 IR scholars who participated in our survey. 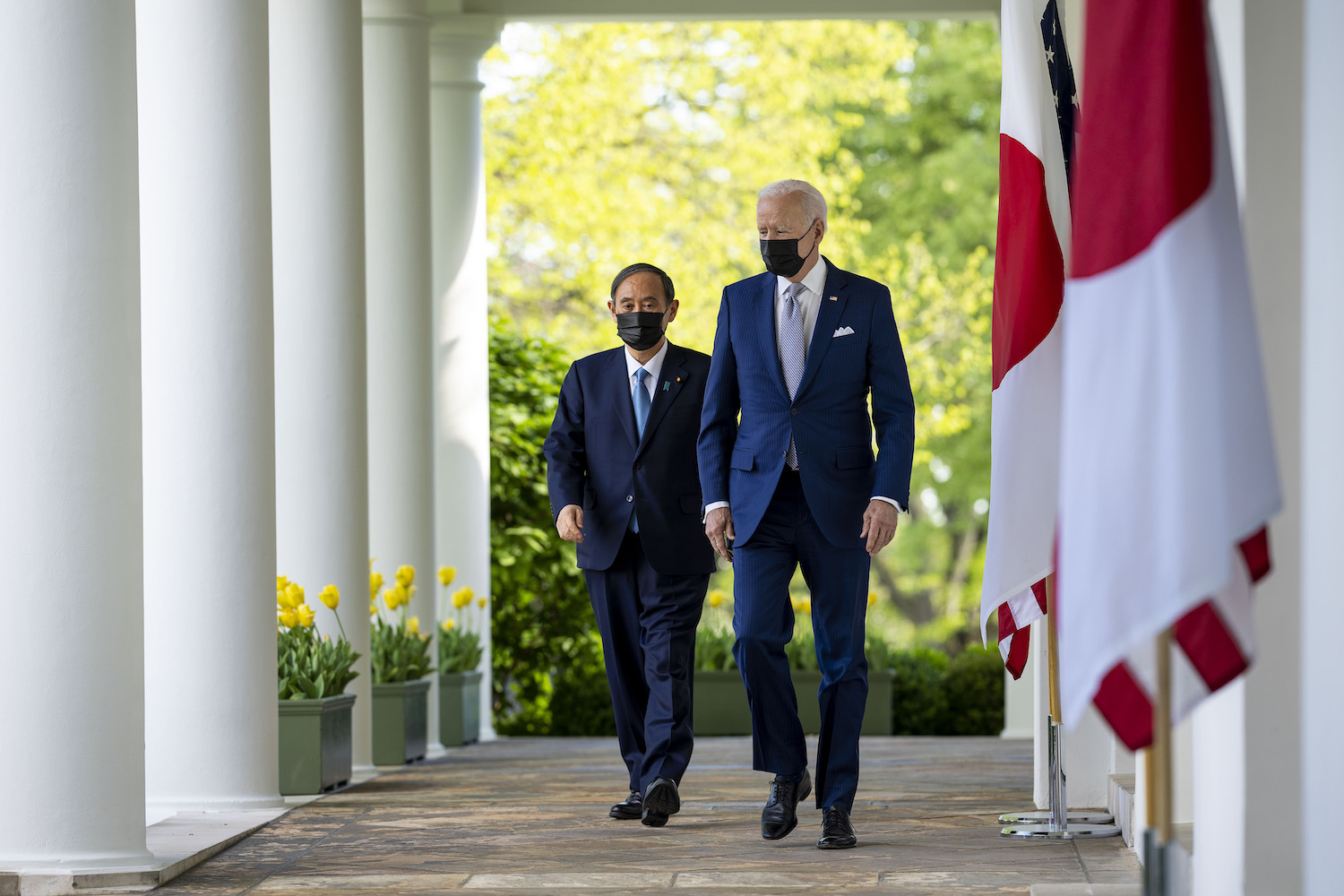 In late April, the Teaching, Research, and International Policy (TRIP) project at William & Mary’s Global Research Institute, with the support of the Carnegie Corporation of New York, surveyed IR scholars at U.S. colleges and universities on Biden’s foreign-policy performance during his first 100 days. The results we report below are based on responses from the 812 IR scholars who participated in our survey.

Respondents overwhelmingly approved of Biden’s foreign policy, especially his positions on climate, alliances, and international organizations. These results differ dramatically from recent expert assessments of the Trump administration’s foreign policy. But while Biden is making the right moves overall in the eyes of IR experts, it remains to be seen whether the president, working with Congress and the international community, can make durable changes to U.S. foreign policy over the long run. (Complete results can be found here.)

Part of Biden’s campaign pitch was that both foreign and domestic audiences would know what they were getting out of his presidency, based on his decadeslong track record. This certainly turned out to be true for IR scholars. Around 80 percent of the surveyed experts said the president is performing either well or very well on foreign policy. Most respondents (73 percent) said that Biden had performed about as well as they expected, and 23 percent even said he had outperformed their expectations.

The experts were the most enthusiastic about Biden’s climate policy. Fifty-three percent of experts gave Biden an A on overall climate policy—scoring him a 3.61 average on a 4.0 scale. Since taking office, the president has recommitted the United States to the Paris climate agreement, appointed John Kerry to a cabinet-level post as climate czar, and enacted an ambitious climate policy agenda. In a follow-up question, over 80 percent of scholars said they “strongly approve” of Biden’s commitment to cut U.S. greenhouse gas emissions by 50 percent by 2030.

Biden also scored remarkably well among IR scholars for his approach to alliances and international organizations. About 42 percent of respondents gave Biden an A and 24 percent gave him an A-. Biden has reversed a number of former President Donald Trump’s signature foreign-policy moves, reembracing multilateralism and declaring that “America is back.” Since Biden’s inauguration, the United States has rejoined not only the Paris agreement but also the World Health Organization and the United Nations Human Rights Council. Although allies abroad welcome these moves, there is some concern about just how durable these changes are.

Experts’ assessments were more mixed on Biden’s handling of China and the Middle East, giving him a B grade most frequently in both cases. Just 9 percent of IR scholars said the administration’s Middle East policy deserved an A, and 10 percent gave the president an A for his handling of China. Biden has continued a number of Trump’s policies toward China, leaving in place some trade restrictions,  formalizing a declaration calling China’s abuses of the Uyghur minority a genocide, and promoting closer relations between Taiwanese and U.S. officials.

Many IR scholars, however, would prefer increased economic and intellectual exchanges between China and the United States. Nearly 90 percent oppose limiting the number of Chinese students allowed to study in the United States, and almost 75 percent oppose restricting the exchange of scientific research. The U.S. public, in contrast, has been more skeptical of increased economic ties with China and of hosting Chinese students in recent years.

At the same time, 86 percent of experts say they back sanctions on Chinese government officials linked to human rights abuses, and many of those surveyed support policies that restrict China’s access to sensitive U.S. technology exports (81 percent) and Chinese companies from building communications networks in the United States (75 percent). Given that previous surveys show IR scholars overwhelmingly say the United States should promote human rights, even if it harms economic relations with China, it is not surprising that Biden receives similar grades on human rights overall. Eighty-two percent of scholars approve of his handling of international human rights, while 90 percent score his human rights policy in the A or B range.

Finally, although Biden received high marks for his handling of the coronavirus pandemic, IR scholars distinguish between the administration’s domestic and international responses. The president achieved his goal of 100 million shots in 100 days more than a month early, and nearly half of U.S. adults have received at least one dose. But Biden’s “America first”-style approach to vaccine distribution did not win praise from the experts. Two-thirds of those surveyed said they do not think the U.S. government was doing enough to help India during its public health crisis.

We fielded our survey after the administration announced that it would increase emergency health supplies to India and before it endorsed waiving intellectual property rules, paving the way for widespread manufacturing of U.S.-developed vaccines.

Where is the next flash point?

We also asked experts to make predictions about two foreign-policy flash points where tensions have risen in recent months: relations between China and Taiwan and between Russia and Ukraine. When asked about the likelihood of the use of military force, respondents indicated direct conflict between Russia and Ukraine is much more likely than between China and Taiwan. Only 6 percent of respondents predicted that China would use military force against Taiwan or its military in the next year. By contrast, more than 30 percent of respondents thought Russia would use force against Ukrainian military forces or in Ukrainian territory where it is not currently operating in the next year.

If conflict does break out in either case, those surveyed largely agree that the United States should exercise caution. In both cases, the overwhelming majority of IR scholars would support sending of U.S. military aid to Ukraine and Taiwan and sanctions on Chinese and Russian leaders, but the experts oppose U.S. military action against Russian and Chinese forces. There is a split regarding sending U.S. forces to each region. In the case of Ukraine, just 34 percent of respondents support such a course of action, while 70 would support doing so in the case of Taiwan.

Nevertheless, IR scholars have little appetite for the United States formally guaranteeing the territorial integrity of either Taiwan (36 percent) or Ukraine (28 percent). In the latter case, few experts see the issue as a bellwether for U.S. allies or potential adversaries. When asked if the United States should use offensive military power in Ukraine to show U.S. allies that it is willing to bear the costs to fulfill or defend important commitments in other areas, just 17 percent of the experts said yes. Only 14 percent said the United States should use force to demonstrate resolve to potential U.S. rivals.

What is the expert consensus?

Despite lingering concern about potential conflict with Russia and China, these results show remarkable consensus among IR experts that Biden is managing U.S. foreign policy well, and this consensus is much stronger than among the general U.S. public. Compared to 80 percent of scholars who strongly approved or approved of the president’s handling of foreign policy, only 48 percent of Americans overall feel the same way, according to a recent Politico survey.

Finally, IR scholars were lukewarm in their support on immigration policy, although they still gave the president higher marks in this area than the public: Just over 7 percent of experts strongly approved, and nearly 46 percent somewhat approved, compared to 17 percent and 26 percent of the public, respectively.

These differences between expert and public opinion on Biden’s handling of four issue areas—the coronavirus pandemic, climate change, national security, and immigration—cannot be explained solely by the party affiliation of respondents, suggesting that scholars’ expertise shape their assessments. A direct comparison between Republican experts and Republican members of the public shows a 15-point gap in approval. More impressively, although only 44 percent of independent voters approve of Biden’s policies, nearly 75 percent of independent experts do.

Taken together, these results suggest that IR experts are optimistic that Biden can be a consequential foreign-policy president if he is able to build on his early initiatives. In his first 100 days, he has focused on issues in which he has unilateral authority, but he has begun work on a number of foreign-policy initiatives that may need cooperation from Congress. The larger partisan divides among the public remind us that polarization will likely constrain Biden’s ability to deliver on these efforts and build to a durable foreign-policy legacy.

Health experts laud a big step forward—but try explaining that to Indian or Brazilian hospitals in a deadly race against time.

The United States says it’s ready to call China in a crisis. Will Beijing pick up?

Alexandra Murphy is a project manager for the Teaching, Research, and International Policy project at the College of William & Mary. Twitter: @azmurphy_

Susan Peterson is the Wendy and Emery Reves professor of government and international relations and the chair of the Department of Government at William & Mary.

Ryan Powers is an assistant professor of international affairs in the School of Public and International Affairs at the University of Georgia. Twitter: @rmpowers

Michael J. Tierney is the George and Mary Hylton professor of international relations and director of the Global Research Institute at William & Mary. Twitter: @MikeTierneyIR

NEW FOR SUBSCRIBERS: Want to read more on this topic or region? Click + to receive email alerts when new stories are published on Foreign & Public Diplomacy, United States, China, Russia