A bill with bipartisan support aims to counter Beijing through funding new technologies. Businesses and special interest groups have jumped right in.

The highlights this week: Bipartisan U.S. legislation to counter China ropes in businesses and special interest groups, Beijing responds to Israel’s operation in Gaza, and Taiwan faces an unexpected coronavirus outbreak after a year of success.

The highlights this week: Bipartisan U.S. legislation to counter China ropes in businesses and special interest groups, Beijing responds to Israel’s operation in Gaza, and Taiwan faces an unexpected coronavirus outbreak after a year of success.

Is Competition With China the New Pork Barrel?

A bill that aims to counter the fear that China is overtaking the United States technologically passed the U.S. Senate by 86 to 11 on Monday, heralding the start of a new era of strategic competition—and businesses and special interest groups getting in on the game.

The Endless Frontier Act, which has backing from both parties and the White House, would allocate $120 billion to funding new technologies, focusing on artificial intelligence, superconductors, and robotics. It would also support new hubs to geographically diversify the U.S. technology industry, which is heavily concentrated in Silicon Valley.

U.S. competition with China is one of just a handful of areas left open for bipartisan cooperation in Washington. The determination to counter Beijing’s influence, already present in 2019, has been sharpened by the coronavirus pandemic. The Endless Frontier Act is one of several related to China and co-sponsored by Republicans and Democrats, including Senate Majority Leader Chuck Schumer.

Lawmakers have stuffed many other measures, from endangered seafood bans to NASA funding, into the Endless Frontier Act in a preview of things to come. Competition with China will be the foreign-policy priority for this and future administrations, and special interest groups see attaching their causes to the so-called new cold war as a way into U.S. government support. This in a way mirrors the Chinese political economy, where companies leap on slogans such as “Belt and Road” to win government favor.

That change is already happening in Silicon Valley, where Big Tech firms have argued that the U.S. government should overlook their privacy violations and deepen cooperation if the United States is to remain competitive. (At the same time, those firms are still trying to reach the Chinese market.) Concerns about China are a mainstay of the private space sector, where Beijing’s achievements—such as the landing of a vehicle on Mars earlier this week—point to the need for hefty U.S. investment.

This competitive mood could be most explosive if, as in the Cold War, it bleeds into ongoing culture wars in the United States. In the 1950s, anti-Soviet sentiment was used both to justify American racism by painting critics as communists and to oppose it by pointing out that the United States couldn’t call for fair elections abroad while suppressing them at home. The U.S. right wing already often uses a largely imagined version of China as a boogeyman, but pundits of all stripes love to mobilize U.S.-China competition for their pet causes.

Expect a lot more rhetoric suggesting that since China is supposedly doing X, the United States must also do X to compete—or it must instead do Y in order not to be like the Chinese Communist Party.

China responds to Gaza operation. Chinese Foreign Minister Wang Yi has put forward a four-point proposal for the Israeli-Palestinian conflict, reiterating the same plans previously offered by China: an end to violence, humanitarian assistance, international support, and a two-state solution. Although Beijing traditionally supports Palestinian rights, its relationship with Israel has grown closer in the last two decades. China is Israel’s second-largest export market, including military technology. Israel formally banned arms exports to China in 2005 under U.S. pressure, but Israeli firms have sought to evade the restraints, including through the export of dual-use technologies.

China has also drawn on Israeli models of control over the Gaza Strip and the occupied West Bank to carry out its own colonial cruelty in Xinjiang, as well as hiring Israeli security personnel to train their local counterparts at the Public Security University in Beijing. (Even as far back as 2014, a senior U.S. official told me that there was a particular interest in employing staffers from Shin Bet, Israel’s infamous internal security service.)

Taiwan’s COVID-19 outbreak. After over a year of success against the coronavirus, Taiwan is struggling with an unexpected outbreak of community transmission, with over 1,000 cases—a droplet by Indian or U.S. standards, but a shock for a population that seemed to dodge the worst of the pandemic. (Initium Media has an excellent summary of the crisis in Mandarin.)

Chinese state media is gloating over the outbreak, especially given Taiwan’s refusal of Chinese COVID-19 vaccines. Similar outbreaks are threatening previously successful nations throughout Asia, from Mongolia to Nepal—leading China to close off more borders out of fear of the virus returning.

Shenzhen’s leaning tower. One of China’s tallest buildings, the SEG Tower in Shenzhen, began shaking on Tuesday, leading to a panicked evacuation. Building standards came under scrutiny after the Wenchuan earthquake in 2008, when many public constructions collapsed, including schools, resulting in the deaths of thousands of children. Locals who sought to investigate the corruption and regulatory failure were persecuted and imprisoned.

Apple concerns. Apple has always had a tricky relationship with China, trying to balance one of its biggest markets against the constant demands of the Chinese state and reputational damage back home. A New York Times investigation includes accounts from former employees that compromises the firm has made with the Chinese government make it “virtually impossible” to prevent the authorities from accessing the data stored on Chinese servers—which, under 2016 laws, includes all of Apple’s Chinese users.

With Big Tech’s relationships with Beijing heavily scrutinized in Washington, the story is politically embarrassing for Apple, which denies the claims.

Bitcoin flux. Bitcoin’s price dropped by nearly 30 percent in a day before rallying, after three Chinese financial authorities put out a statement reiterating earlier bans on trading or dealing in cryptocurrencies. Cryptocurrencies have a paradoxical relationship with China: The bulk of currency mining, along with many consortiums controlling large stakes in different cryptocurrencies, are based in China, but the authorities are leery of trading. Every time they signal this, the volatile bitcoin market reacts sharply.

Bitcoin is mostly a tool for converting money beyond the Chinese government’s tight export limits. Miners bought the electricity needed to run banks of processors with yuan, then sold the resulting bitcoins for dollars. Cryptocurrency enthusiasts regularly suggest it will eventually be backed by the power of the state, confusing Chinese miners’ enthusiasm with the state itself and turning on misinterpretations of ideas such as the digital yuan—a non-blockchain, still-underdeveloped project.

Titanic ambitions. A $150 million life-sized replica of the Titanic is set to open soon as the centerpiece of a theme park in Sichuan province. As one of the first widely available Western films, Titanic became a massive hit in China and a constant cultural touchstone. Theme parks have become common in China, and they are riding a pandemic boom due to the lack of foreign tourism options. As in Japan in the 1990s, overambitious plans and construction busts in some regions have left eerie landscapes behind. 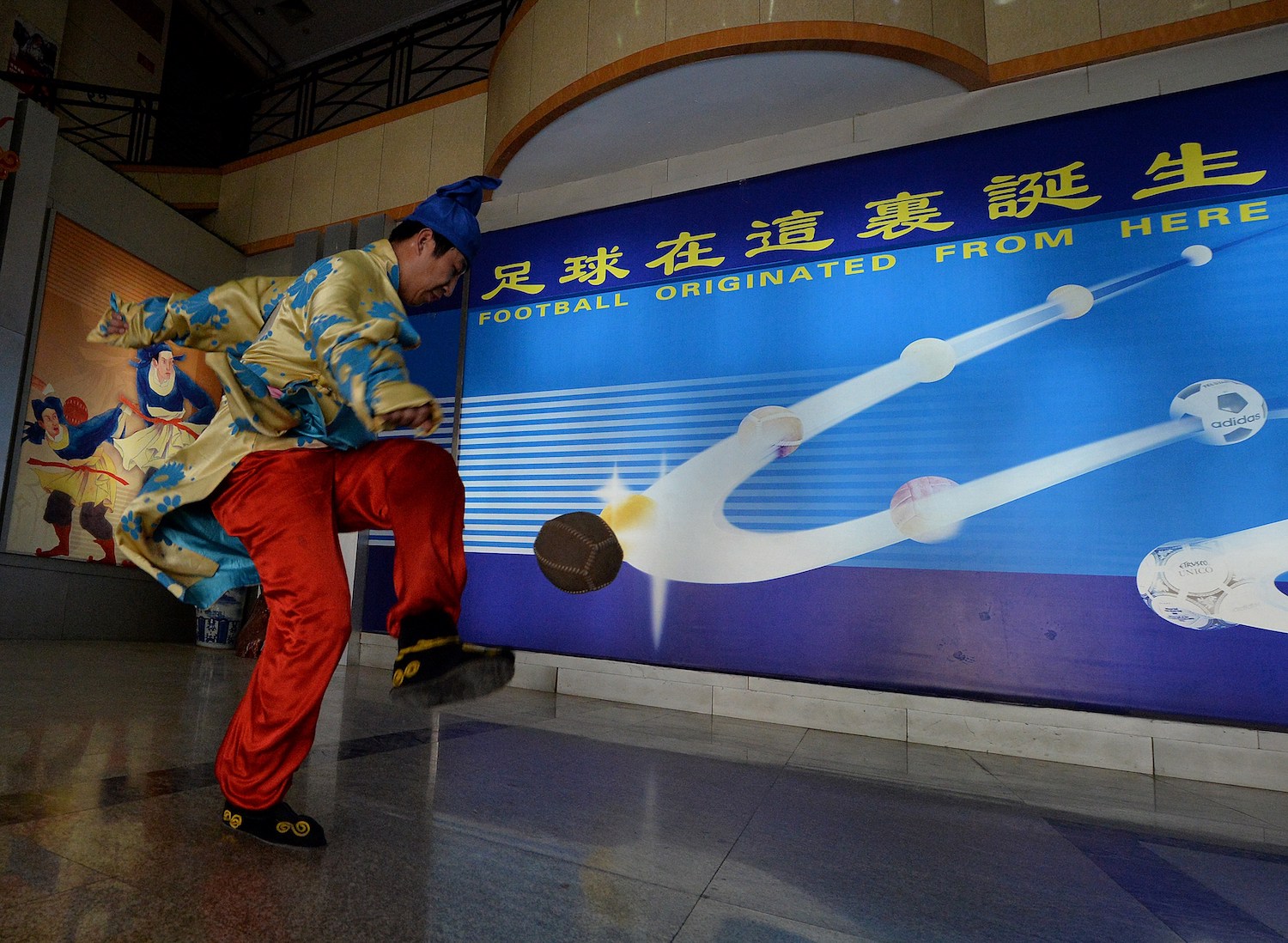 A traditional cuju player kicks a ball at the Linzi Football Museum in Zibo, China, on May 15, 2014. MARK RALSTON/AFP via Getty Images

Zibo is a classic provincial second city, overshadowed by Jinan, Shandong’s capital, to its west and by Qingdao to the east. The city’s glory days were over two millennia ago, when it was the capital of the state of Qi—the last competitor swallowed up by Qin, the despotic kingdom that would become the foundation of the first, short-lived Chinese empire. Zibo’s global profile is so insignificant that Googling it from the United States takes you to a U.S. software firm before a city of more than 4 million people.

But that makes Zibo a classic study in how Chinese cities try to recreate a cultural profile for themselves. The city calls itself the birthplace of soccer, based on the ancient sport of cuju, a kickball game for nobles first mentioned in Qi records. (Now-disgraced former FIFA chairman Sepp Blatter endorsed the claim in 2005.) There is no actual connection between cuju and modern soccer, and every ancient culture seems to have played ball games, but Zibo is taking what it can get—even if the actual heyday of cuju was in a totally different city, Kaifeng.

Zibo’s own soccer team, called Zibo Cuju, isn’t even any good. A local entrepreneur recently bought it and insisted on putting himself on the team. It is currently in last place in the second division.

Update, May 21, 2021: This piece has been updated to reflect the fact that Israel formally banned arms exports to China in 2005.
Correction, May 21, 2021: A coronavirus quarantine hotel recently collapsed in Quanzhou, China. A previous version of this article misstated the hotel’s location.

NEW FOR SUBSCRIBERS: Want to read more on this topic or region? Click + to receive email alerts when new stories are published on Science and Technology, United States, China