A Victory for Kenya’s Constitution

On the evening of May 13, five judges of Kenya’s High Court read a ruling that would last four hours and change the country’s political landscape. In a scathing opinion, the judges annulled a bill to amend the country’s constitution, dealing a blow to President Uhuru Kenyatta and his rival-turned-convenient ally, Raila Odinga.

Building Bridges. Dubbed the Building Bridges Initiative (BBI), the Constitutional Amendment Bill 2020 was spearheaded by Kenyatta himself and billed as a solution to the violence that has marred elections every five years. Kenyans have experienced post-election violence in 1992, 1997, and 2007.

In 2017, the presidential race between Kenyatta and Odinga led to deep divisions. The bill is a result of the famed handshake between the two leaders in 2018, a rapprochement that would supposedly lead to national reconciliation by way of a constitutional amendment.

The bill suggested amendments to more than a dozen chapters of the current constitution, which included a restructuring of parliament that would create the positions of prime minister, deputy prime ministers, an official position for the runner-up in the presidential election, and a judiciary ombudsman. Kenyatta and proponents of the bill argued that it would empower voters by creating new counties, which would also receive development funding.

Despite Kenyatta’s selling points, the judges ruled that he was overstepping his powers by initiating such far-reaching reforms to the country’s laws.

“[H]e cannot initiate any move to amend the constitution contrary to the constitution. It is not in his power,” the judgement reads. The judgement also makes Kenyatta, whose second term ends next year, liable to be sued in his personal capacity. The task force appointed to steer the amendments was unconstitutional and therefore illegal, and judges warned the president could be guilty of a conflict of interest.

Since forming the Jubilee Party in 2016, the formalization of their 2013 election alliance, Kenyatta and Ruto have publicly fallen out, and many of Ruto’s allies have been purged from the Jubilee Party. The BBI amendments would have scuppered Ruto’s plans to succeed Kenyatta as the Jubilee candidate in the 2022 presidential election, a ticket that was already in doubt.

“There is God in heaven who loves Kenya immeasurably,” Ruto tweeted as the judgment was read. But there are no heroes and villains in Kenyan politics—only coalitions, alliances, and dynasties. Ruto, Odinga, and others will no doubt continue to jockey for position while Kenyatta secures his retirement. The ruling is about much more than party politics. It is a victory for the Kenyan judiciary and the country’s hard-won constitution.

The people’s constitution. Kenya’s current constitution was approved by two-thirds of the citizenry, who voted in a 2010 referendum to introduce a citizen’s bill of rights, clear separation between the executive and the judiciary, and increased parliamentary oversight.

Addressing these and other issues was seen as solution to ending the cycle of violence that emanated from Kenya’s national politics. And, as Carey Baraka pointed out in Foreign Policy in 2020, a driver of Kenya’s political violence is the lack of accountability for the perpetrators.

In upholding the 2010 constitution and standing up to the executive, critics of the bill say it is the citizenry who will ultimately benefit in the long run.

“It is the reason why we must constantly remind ourselves that this constitution was negotiated by Kenyans over a two-decade period with the objective to transform Kenya by constitutionally overthrowing the old order that represented a parasitic model of government,” wrote Martha Karua, a former minister of justice and a member of the group Linda Katiba.

The group, founded in February this year and whose name means Guard the Constitution, has vehemently opposed the bill through a public campaign.

“At its core, the BBI initiative is about defending this untenable parasitic model,” Karua argued ahead of the ruling.

No one is above the law. The group sees the bill as a gateway to a bloated parliament and executive. It also questions how the BBI would ever make good on its promise to disburse funds to counties, when it already has the power to do so but has failed. What is a matter of political will and administrative wrangling among Nairobi elites translates to bread-and-butter issues for ordinary Kenyans, deciding on matters such as whether clean water and sanitation will finally be delivered.

While Kenyatta plans to appeal the ruling, the judgement will remain a lesson for Kenyan politicians—that they are not above the law, even as they try to change it.

Thursday, May 20: Regional leaders are set to meet in Somalia to discuss the electoral crisis.

Friday, May 21: The United Nations Security Council meets to discuss the crisis in Libya.

Monday, May 24: The International Criminal Court will begin its trial of Ali Kushayb, alleged leader of the janjaweed militia that perpetrated the Darfur genocide in Sudan.

Wednesday, May 26: The corruption trial of Jacob Zuma and the French arms dealer Thales continues in South Africa. 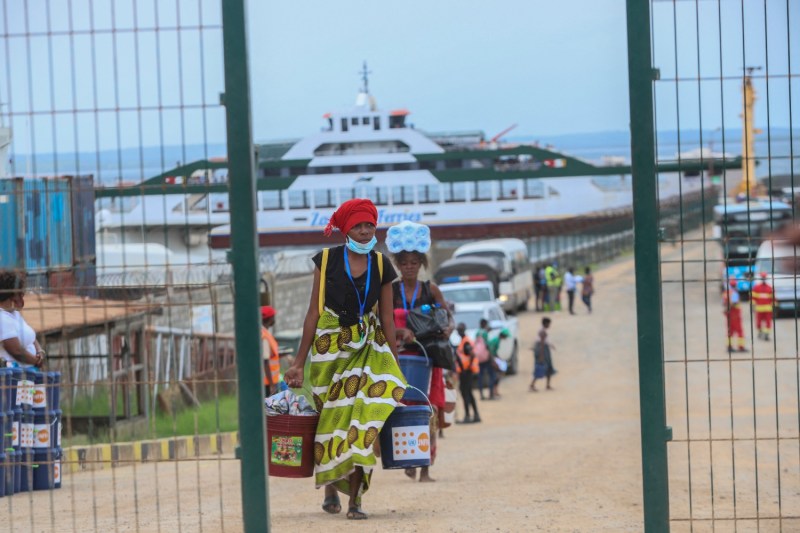 Internally displaced people arrive in Pemba from the boat of evacuees from the coasts of Palma, Mozambique, on April 1.ALFREDO ZUNIGA/AFP via Getty Images

Racism during Mozambique rescue. More than a month after the March 24 attacks in the city of Palma, Mozambique, Amnesty International is alleging that the rescue mission was tainted by racism. The international human rights organization has recorded nearly a dozen interviews that show that in the chaos of the rescue mission, white foreigners were prioritized over Black locals.

About 200 Black people and 20 white people were holed up in the Amarula hotel as insurgents fired at will. When help did arrive, in the form of private security contractors like the Dyck Advisory Group, interviewees said the racial discrimination was clear, with some fearing that once all the white people were rescued, they would be forgotten and left among the dozens who died in the siege.

Xenophobia in Zambia. Ahead of the August election, foreign nationals in Zambia say they fear for their lives. Shopkeepers in the country’s townships say they are often victims of threats or actual crimes. Many of them are Rwandan nationals who fled Rwanda and then the refugee camps of the Democratic Republic of the Congo to seek a better life in a historically stable state.

Zambia has a history of hosting refugees from the region and soon after independence actively championed policies to fight xenophobia. But the accounts of anxious foreigners show that the country’s stalled economy has eroded this, with foreigners being blamed for rising crime and stealing jobs, a common refrain that often gives rise to violent anti-immigrant backlash.

An investigation by the New Humanitarian and the Thompson Reuters Foundation interviewed 22 women in Butembo in eastern Congo, which became an aid hub during the outbreak. Many of the women worked as cleaners for the aid agencies and say they were offered jobs in exchange for sex. At least one says she was raped by an aid worker.

The alleged perpetrators worked for the World Health Organization and other United Nations agencies including UNICEF as well as the International Rescue Committee. The investigation follows similar revelations in Beni, another aid hub about 40 miles away, where a 2020 investigation found that 51 women were also sexually abused by aid workers.

COVID-19 testing lags behind in Africa. As some countries on the continent, such as Angola and South Africa, appear to be heading toward a new wave of COVID-19 infections, testing for the coronavirus is key to establishing the extent of the resurgence. Yet, despite efforts such as creating regional testing hubs, Africa still lags behind in the rate of testing per day.

Global tech vs. local tribe. Amazon is planning to cement its expansion into Africa with an impressive new regional headquarters in Cape Town, South Africa, where the global tech giant already has a web services hub.

The site was meant to include 7 million square feet of office space, as well as residential space, a hotel, and a gym in a $283 million complex. But South Africa’s marginalized First Nations say they are the custodians of the plot and that the development would desecrate their ancestral land.

Land, and who owns it, is a contentious topic in South Africa. During apartheid, the proposed Amazon site was owned by the state rail company and earmarked as a leisure resort for its white employees, and then sold to the current developers. Years before, the site was the location of Indigenous Khoi resistance to Dutch colonialism during the 17th century. Critics say the 21st-century development is yet another example of South Africa’s enduring inequality and legacy of colonialism.

As a result of this history, activists from the Khoi and San ethnic groups say they are the legal custodians of the area of the proposed development, yet even among the groups there is division. Some have welcomed the developer’s compromise of a heritage center within the complex and the promise of jobs, but another group says the complex will bring environmental and cultural destruction.

The resident’s association has written to Amazon CEO Jeff Bezos’s ex-wife MacKenzie Scott, in the hope that she will stop the development. Amazon has not commented on the matter. City authorities, on the other hand, say the two-year heritage designation has lapsed and rezoned the land for commercial use in a process that consulted local traditional leaders.

He argues that his continued presidency is not about an individual seeking to cling to power but rather how elites have frustrated his efforts to discard indirect elections and establish universal suffrage that might threaten their dominance.

Calling on the AU to step up in the Sahel. The prominent African intellectuals and activists Patrick Lumumba, Alioune Tine, and Kumi Naidoo have written a public letter calling on the African Union to urgently appoint a high representative for Mali and the Sahel who will actually spearhead an African response to the worsening crisis.