With Russia and China staking claims, can diplomacy stave off a militarization of the far north?

Welcome to SitRep! Before we get started, take a few minutes of your day to don your tinfoil hat and learn about how the U.S. military is grappling with regular UFO sightings (sadly and/or happily, depending on who you ask, they might not be actual aliens).

OK, now back to your regularly scheduled programming. Here’s what’s on tap today: Geopolitics heat up in a melting Arctic, Russia brings pipeline politics to Syria, and Biden looks to avoid another Saigon moment in Afghanistan.

Welcome to SitRep! Before we get started, take a few minutes of your day to don your tinfoil hat and learn about how the U.S. military is grappling with regular UFO sightings (sadly and/or happily, depending on who you ask, they might not be actual aliens).

OK, now back to your regularly scheduled programming. Here’s what’s on tap today: Geopolitics heat up in a melting Arctic, Russia brings pipeline politics to Syria, and Biden looks to avoid another Saigon moment in Afghanistan.

Arctic ice is rapidly receding as the planet warms, and all the while geopolitical tensions are seeping into the once-frozen region. That was on full display this week as U.S. President Joe Biden’s top diplomat visited Iceland and Greenland, and separately the U.S. military showed it was beefing up its presence and exercise tempo with NATO allies in the “high north” (as America’s European friends like to call it).

Both China and Russia have designs on the Arctic, something making the United States and other Arctic littoral nations, including NATO allies Canada and Norway, very uneasy (more on that here). And, despite U.S. climate envoy John Kerry’s best efforts, climate change is heating up the planet with no real end in sight, so a melting Arctic means new shipping lanes, resource exploration, and potential military presence. So, how is the Biden administration addressing this?

Let’s start off with diplomacy. Secretary of State Antony Blinken’s travel this week gave an early indication of how the Biden administration views the geopolitics of a warming Arctic. His trip, in itself, “is a pretty strong statement of the strategic importance of the region for the U.S. going forward,” Heather Conley, an expert on European and Arctic security at the Center for Strategic and International Studies, told SitRep.

An icy meeting. Blinken met with Russian Foreign Minister Sergey Lavrov on the sidelines of an Arctic Council meeting in Reykjavik, Iceland, on Wednesday. Reading between the lines of anodyne State Department meeting readouts, they exchanged some tense words behind the scenes on a range of thorny issues. Blinken has publicly stressed the need to avoid a militarization of the Arctic.

Don’t rock the boat? It is a careful diplomatic balancing act as diplomats try to keep such issues as climate change and environmental cooperation at the top of the Arctic agenda—and carefully sidestep discussions on geopolitical tensions. It’s not clear how sustainable that approach is in the long term, particularly as Russia amasses more military hardware in the region. Blinken said the Arctic Council “should remain focused on how we advance peaceful cooperation in the region.”

Now on to the military. The United States and its NATO allies are working to boost their military presence near the Arctic. While it doesn’t mean aircraft carriers will be doing laps around Svalbard anytime soon, it does mean an increased tempo of military exercises and ports of call in Northern Europe not seen since the Cold War days.

A pattern emerges. Here are a few interactions that point to the bigger trend:

First, Norway is moving forward with plans to allow the United States to build its own facilities on several key Norwegian military bases, as Reuters reported this week.

Second, a U.S. submarine, the nuclear-powered Virginia-class USS New Mexico, docked in the Norwegian port of Tromso earlier this month—something that Russia isn’t too pleased about even as it bulks up its own Northern Fleet.

Third, the U.S. military and its NATO allies are increasing military exercises in the region. This month, 10 countries, including the United States, are sending ships and aircraft to the North Atlantic in Exercise Formidable Shield (NATO always comes up with the loveliest exercise names) for live-fire drills aimed at stress-testing air and missile defenses.

Squaring the circle. While Blinken is cautioning against military buildups in the Arctic, the U.S. armed forces appear to be doing the opposite. Hypocrisy? It depends who you ask. Top Russian officials certainly think so. But some Western experts say no: None of these moves or military exercises are aimed at threatening Russia in any offensive way, but simply bulking up deterrence and dusting off the Cold War-era cobwebs on militaries practicing operating in the North Atlantic. A gentle reminder of deterrence, if you will.

Others say even if Blinken is urging countries to avoid militarizing the Arctic, the cat’s already out of the bag. “It is militarized, now we have to address it,” Conley said.

Confirmation votes. Early next week, the Senate Foreign Relations Committee is expected to vote on nominations for Bonnie Jenkins to be the top State Department arms control envoy and Jose Fernandez to be the State Department’s top economic and energy envoy. Senate aides say they don’t expect much opposition to either nomination—but it’s Washington, and, moreover, it’s Congress, so that could all change in an instant.

Missing in action. Who’s not joining the administration is just as important as who is. Amid the deadly explosion of violence in Gaza, Biden has yet to name an ambassador to Israel (though administration insiders tell SitRep former U.S. Rep. Robert Wexler and former diplomat-turned-banker Thomas Nides are front-runners for the post.)

Meanwhile, Biden last month announced his intent to nominate Barbara Leaf as his top State Department envoy for the Middle East. But congressional aides tell SitRep that Leaf has yet to turn in all her paperwork to start the Senate confirmation process. A confirmed assistant secretary of state for Near Eastern affairs might have been useful for the president to have had in place when the most recent Israeli-Palestinian crisis flared up…

Eastern promises. So it turns out Russian President Vladimir Putin didn’t plan a military intervention in Syria to prop up the Bashar al-Assad regime out of the kindness of his own heart. (We’re as shocked as you are.) A network of little-known Russian companies are behind deals with Assad’s government for offshore oil and gas exploration, as our colleague Amy Mackinnon scooped this week.

And surprise, surprise, it’s less about the fuel and more about Russia securing a foothold in the Eastern Mediterranean.

Havana nights. House and Senate Intelligence Committee leaders are introducing bills that would help care for CIA and State Department officials affected by mysterious symptoms, dubbed “Havana syndrome” (background here), which some say could be caused by directed microwave attacks from foreign adversaries.

The bills are a sign that Congress is frustrated with the way that the executive branch has handled the issue; those affected by “Havana syndrome” have until recently been denied treatment at Walter Reed National Military Medical Center.

Avoiding another fall of Saigon. Thousands of Afghans who put their lives on the line to help U.S. troops in Afghanistan for the promise of U.S. visas are now mired in bureaucratic limbo awaiting word on their visas, as we reported this week.

They face the risk of assassination by the Taliban as U.S. troops complete their final withdrawal thanks to onerous red tape. It has caused a major political fight in Washington, with a livid Congress browbeating Biden to step up efforts to clear the backlog of Afghan visa applicants, and Biden officials insisting they’re working on it.

“We did this in Vietnam and it created generational damage,” fumed one congressional aide who spoke to SitRep. “I cannot believe that they’re potentially going to allow this to happen again.” 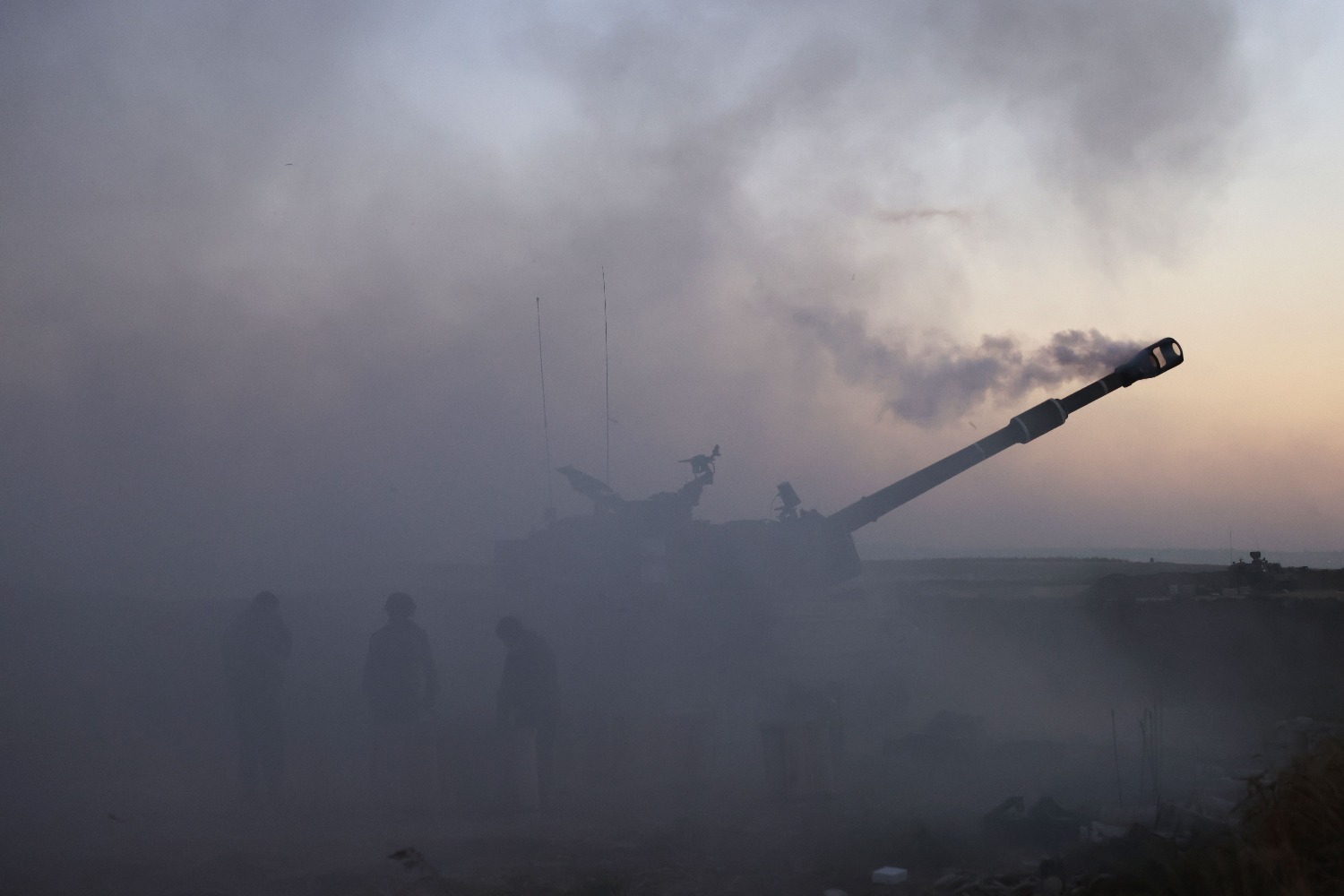 Israeli soldiers fire a 155 mm self-propelled howitzer toward the Gaza Strip from their position along the border on May 18.Menahem Kahana/AFP via Getty Images

Friday, May 21: Lt. Gen. Daniel Karbler, commander of U.S. Army Space and Missile Defense Command, speaks at a virtual event with the Center for Strategic and International Studies.

Friday, May 28: The Biden administration plans to release its budget for fiscal year 2022.

Reporter: “Mr. President, can I ask you a quick question on Israel before you drive away?”

Biden: “No you can’t. Not unless you get in front of the car as I step on it.”

—Biden dodges a reporter’s question about the Israeli-Palestinian conflict before speeding off in an electric truck at a Ford Motor plant in Dearborn, Michigan—home to one of the largest Arab American populations in the United States

The view from Beijing. A fascinating piece in War on the Rocks on how China views the U.S. withdrawal of troops from Afghanistan, from Yun Sun of the Stimson Center.

How undiplomatic. The wife of the Belgian ambassador to South Korea is claiming diplomatic immunity to dodge charges stemming from an April altercation in which she allegedly shoved and slapped a store clerk.