Technology transfers to produce shots are slowly underway in the region.

The highlights this week: what Latin America’s vaccination status reveals about geopolitics, the transformation of Chile’s political landscape, and the mysterious death of a Colombian guerrilla leader.

The highlights this week: what Latin America’s vaccination status reveals about geopolitics, the transformation of Chile’s political landscape, and the mysterious death of a Colombian guerrilla leader.

Five months after the world’s first COVID-19 vaccination campaign began—and as countries like Argentina, Colombia, and Peru experience devastating new spikes in daily death tolls—only 3 percent of people in Latin America and the Caribbean have been fully vaccinated, according to the Pan American Health Organization (PAHO).

But variations within the income groups point to the benefits some have from international partnerships, particularly with China, for vaccine access. At the same time, many have faced delays symptomatic of the largely zero-sum, rich-versus-the-rest approach to vaccine procurement that has defined the pandemic thus far.

Although Latin American countries have purchased shots from diverse producers (ordering the most doses from European manufacturers in early April), Chinese doses have shipped first, comprising more than half of deliveries to the region’s 10 most populous countries by early May, according to the Financial Times.

The Chinese Sinovac shot accounts for most vaccines administered by regional champion Chile, which aggressively arranged deals with many providers while vaccines were still in clinical trials. It has secured and optioned doses for more than 200 percent of its population. Chinese-developed vaccines are also prevalent in Brazil, where the state of São Paulo struck a deal with Chinese biotech Sinovac to allow its Butantan Institute to fill and finish the shot. Sinovac already accounts for most shots given in Brazil.

Technology transfers are also underway to give plants in Mexico and Argentina the ability to produce the AstraZeneca and Sputnik V shots, an example of the developing world’s manufacturing scale-up that public health experts say is crucial to boosting global supply. Less than 4 percent of medical products used for Latin America’s COVID-19 response have come from the region, PAHO said.

Supply shortages. Latin America vaccine delivery delays are related in different ways to the global vaccine manufacturing and supply chain crunch—as well as to the opaque and often nationalistic allocation of materials and manufacturing permissions so far.

Russia’s Sputnik V manufacturers, which have delivered the region far fewer doses than promised, have struggled to obtain appropriate equipment and personnel, reported Reuters. A Mexican plant’s production of the AstraZeneca shot was held up because the United States banned the export of certain raw materials, said the foreign minister of Argentina, which is partnering with Mexico on vaccine production. And India’s Serum Institute recently announced it may continue to pause exports until the end of the year to prioritize domestic supply.

COVAX undermined. The only global multilateral mechanism designed to allocate vaccines in an equitable way, the COVID-19 Vaccines Global Alliance (COVAX), is on track to be nearly 190 million doses short by June, the U.N. Children’s Emergency Fund’s director Henrietta Fore said Monday. COVAX plans to supply 280 million doses to the Americas this year. Fore called on leaders of G-7 countries to donate 20 percent of their own vaccine stocks to COVAX between June and August, saying it would amount to around 153 million doses.

Although several pharmaceutical companies have pledged to supply doses directly to COVAX, some public health advocates have criticized the lack of transparency in their supply contracts, saying it hampers their ability to raise awareness about missed deadlines and verify companies are living up to their pledges to charge low rates for the shots.

Building solutions. Another issue limiting vaccine supply has been resistance among producing nations, especially Germany, to an intellectual property (IP) waiver for the shots. If that is overcome at the World Trade Organization, it would be a powerful first step toward expanding production at the scale needed to address the pandemic in Latin America and the rest of the developing world. For example, Canada’s Biolyse Pharma said last week it could supply Bolivia with 15 million doses of Johnson & Johnson’s vaccine and produce 50 million doses per year if such a waiver were approved.

Also crucial are technology transfers and investments boosting the entire testing, vaccine, and therapeutics supply chain—steps that are possible and powerful even without an IP waiver. Latin American countries like Argentina and Cuba have recently taken important steps to increase biotech investments. Although U.S. President Joe Biden has shown interest in addressing the pandemic’s global dimension through IP waiver support and vaccine donations, epidemiologist Gregg Gonsalves told Foreign Policy’s Michael Hirsh that an important next step would be taking the $16 billion earmarked for shoring up COVID-19 supply chains in a recent stimulus package and applying it globally.

Friday, May 21: Argentina, Brazil, and Mexico participate in the G-20 Global Health Summit.

Thursday, May 27: Deadline expires for Honduran political parties to formalize their alliances for the November general elections.

Chile’s new political landscape. The triumph of Chile’s far-left and independent candidates in last weekend’s constituent assembly and local elections prompted several right-wing and center-left candidates to drop out of a crowded November presidential race. Two different groups of parties, one on the right and one on the left, will now each hold a primary to further narrow the field. 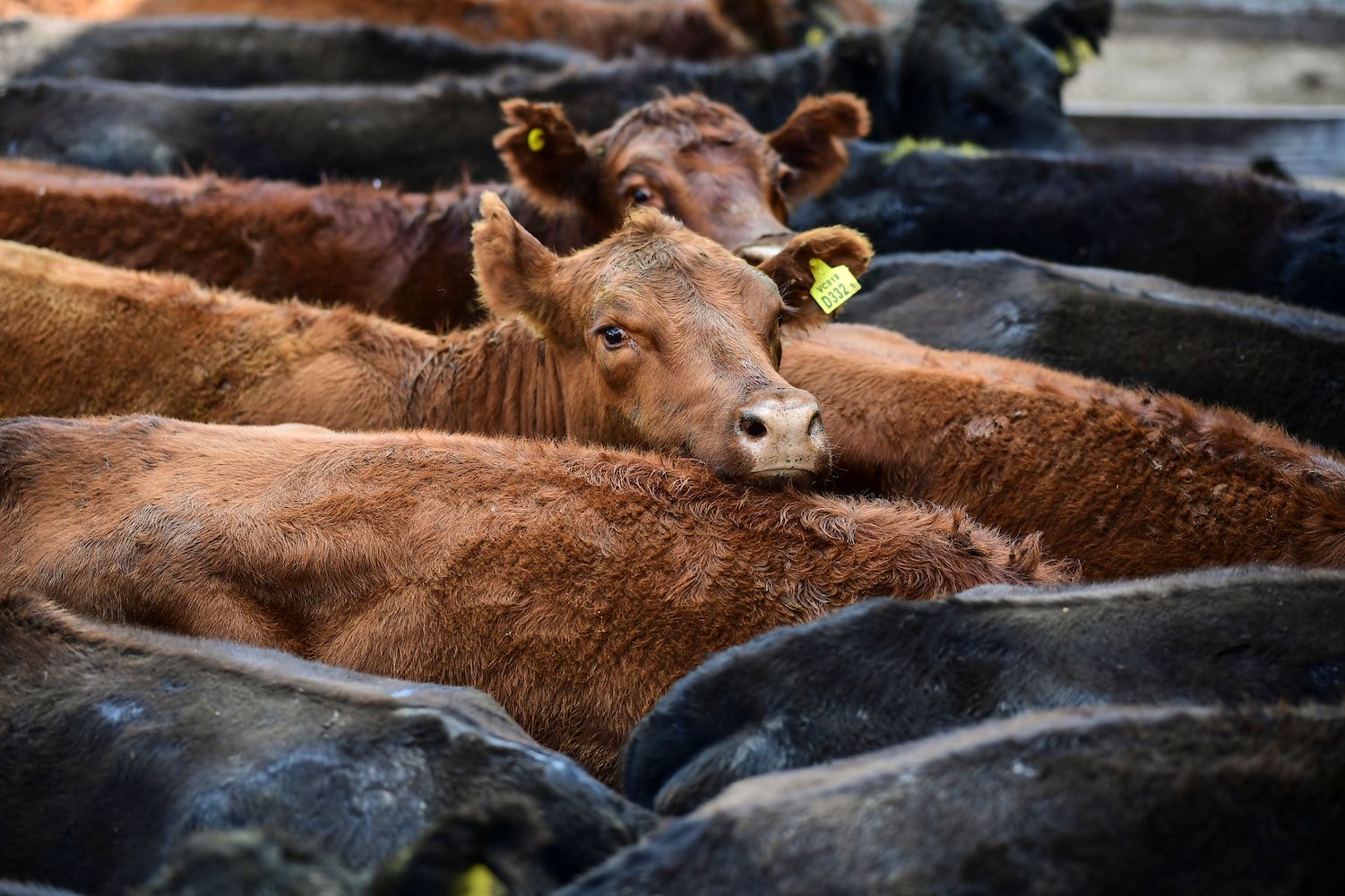 Cows are seen at Liniers Market in Buenos Aires, Argentina, on May 18.Ronaldo Schemidt/AFP/Getty Images

Beef in Argentina. On Monday, Argentine President Alberto Fernández announced the country will suspend beef exports for 30 days. The measure, meant to slow down runaway inflation (the annual rate is 46 percent overall and around 65 percent for red meat), sparked some farmers to announce a nine-day strike. This export ban was last implemented in 2006, when Fernández was cabinet chief to then-Argentine President Néstor Kirchner.

History at CARICOM. Belizean economist Carla Barnett was elected as the first female secretary-general of the Caribbean Community (CARICOM). She was previously vice president of Belize’s senate and has served in economic governance positions in the country and at the Caribbean Development Bank.

The pandemic in photos. A group of documentary photographers from 14 Latin American countries have met virtually each week during the pandemic to compare notes. The Washington Post published several photos from their award-winning book Red Flag—named for how Colombians signaled they needed aid during the pandemic—and many more can be viewed on their Instagram page. The images depict moments of everyday resilience and loss, including intimate scenes from quarantine that look at the theme of family.

Cuba began to vaccinate residents of Havana last week with two homegrown vaccines that are still in late-stage clinical trials. In which of the following countries is another locally developed vaccine going through the regulatory process to start trials?

In Focus: An Iconic Guerrilla Downed

The Colombian guerrilla leader known as Jesús Santrich—famous for his dark glasses, checkered scarves, and abandonment of the country’s peace agreement that granted him a senate seat—was killed near the Colombia-Venezuela border, according to the armed group he commanded and Venezuelan military officials.

News of the death and many hypotheses for its motive underscore the increasingly complex security dynamic in the border region. Despite Colombia’s 2016 peace agreement with the Revolutionary Armed Forces of Colombia (FARC), FARC dissident groups like Santrich’s continue to be active in the area, competing and sometimes cooperating with other armed groups and Venezuelan security forces.

Possible motives. Santrich’s group, Segunda Marquetalia, said he was killed by Colombian forces that crossed into Venezuela. Security analyst Andrei Serbin Pont told VICE Santrich could also have been killed by mercenaries seeking a $10 million bounty offered by the U.S. government, which sought to extradite Santrich for drug trafficking; by Venezuela’s military; or by his own forces due to an internal conflict. InSight Crime wrote that most plausibly, Santrich could have been killed by criminal rivals like FARC dissident Tenth Front.

Tension between neighbors. Colombia and Venezuela severed diplomatic ties in 2019 and are already at loggerheads over guerrilla-related fighting in their border region that has displaced thousands of Venezuelans since March. Santrich’s death could lead to an escalation in conflict in the region.

Brazil’s Butantan Institute, responsible for the production of Sinovac in the country, is also undergoing a regulatory approval process to begin trials on “ButanVac,” which draws on technology created at two U.S. universities but features entirely Brazilian supplies.

NEW FOR SUBSCRIBERS: Want to read more on this topic or region? Click + to receive email alerts when new stories are published on Health

The gulf between haves and have-nots is only growing.