Is the Leader of Boko Haram Really Dead This Time?

A notorious terrorist leader in West Africa is reportedly dead. Here’s what it means for counterterrorism efforts.

Welcome to Foreign Policy’s SitRep! TGI(almost)F on what feels like an unusually long week.

First off, a heads up for readers in the Washington, D.C., area: Arlington National Cemetery is loosening its pandemic restrictions for those who want to pay their respects over this upcoming Memorial Day weekend.

Now here’s what’s on tap for the day: the likely death of the leader of Boko Haram, starting pistol for the Pentagon budget wars, some new names of people joining Biden’s national security team, and more.

Welcome to Foreign Policy’s SitRep! TGI(almost)F on what feels like an unusually long week.

First off, a heads up for readers in the Washington, D.C., area: Arlington National Cemetery is loosening its pandemic restrictions for those who want to pay their respects over this upcoming Memorial Day weekend.

Now here’s what’s on tap for the day: the likely death of the leader of Boko Haram, starting pistol for the Pentagon budget wars, some new names of people joining Biden’s national security team, and more.

Reportedly a Chronicle of a Death Foretold

The notorious leader of one of the world’s most dangerous terrorist organizations is finally dead. Maybe? Probably. Perhaps.

Abubakar Shekau, the leader of the Boko Haram terrorist group, has reportedly died in northeast Nigeria after setting off explosions to kill himself during a confrontation with a rival militant group.

If the reports are true, his death would deal a major blow to one of Africa’s deadliest and most brutal terrorist organizations—and provide a significant morale boost to the Nigerian military, which has struggled to make gains against extremist groups after over a decade of fighting.

Boko Haram is responsible for the deaths of tens of thousands of civilians, and Shekau stands out for using children as suicide bombers and orchestrating the kidnapping of hundreds of Nigerian schoolgirls in 2014 that sparked the global #BringBackOurGirls campaign.

“If” being the key word. There’s a serious “boy who cried wolf” phenomenon with Shekau. Since 2009, Nigerian officials have excitedly declared Shekau dead at least four times, only for him to crop up—again—alive. The United States hasn’t yet been able to independently verify the reports of his death, a State Department spokesperson told SitRep.

Is his death a game-changer? It’s complicated. Killing terrorist leaders doesn’t make an organization magically disappear—al Qaeda survived Osama bin Laden’s death, and the Islamic State has outlasted Abu Bakr al-Baghdadi. But Boko Haram may be different in some ways, because Shekau was seen as the linchpin holding the group together.

“The death of Shekau is significant, because he is Boko Haram,” said Judd Devermont, a former top CIA analyst on Africa. “It’s not clear who would replace him and whether or not its objectives, its tactics will change,” added Devermont, now a scholar at the Center for Strategic and International Studies.

So now what? If he’s dead, Boko Haram could splinter, with different factions joining other extremist groups, including the Islamic State West Africa Province, or going off on their own, several experts said.

That could lead to more violence or infighting between extremist groups, with civilians caught in the middle. And the root causes of extremism in West Africa—corruption, ethnic violence, poor governance—remain in place, meaning extremist groups in whatever guise aren’t going anywhere.

“It’s a fair question to ask: Will there be Boko Haram for much longer if Shekau is gone?” Devermont said. “Will those different elements that fight with him, continue on with his legacy or go join ISIS, or devolve into banditry?”

The Senate on Wednesday evening confirmed Christine Wormuth as the next secretary of the army, making her the first woman to hold the position. (In a procedural hiccup, the Senate canceled the confirmation before adjourning Wednesday night. She was re-confirmed Thursday morning.)

Pranay Vaddi, a scholar at the Carnegie Endowment for International Peace, is joining President Joe Biden’s State Department as a senior advisor on arms control issues.

Kelley Currie, a former envoy for global women’s issues and senior U.S. Mission to the United Nations official under Trump, is joining the Center for a New American Security as an adjunct senior fellow.

China bill-a-palooza. It seems like there’s a new bill to counter China cropping up in Congress every day these days, but there’s a new one that stands out among the rest. The chairman of the House Foreign Affairs Committee, Rep. Gregory Meeks, released a doozy of a bill this week with ambitious and sweeping proposals to boost U.S. competitiveness with Beijing on the world stage.

If you’re in the mood for a beach read, here’s the full 470-page text of the bill. Some key items we noticed: It calls for boosting the number of U.S. diplomats based in the Indo-Pacific, establishing an ambassador-at-large for the Arctic to manage geopolitical tensions with China in the far north, and holding China accountable for its glut of greenhouse gas emissions.

Dropping Friday. The Pentagon’s $715 billion budget—which Biden’s progressive allies on Capitol Hill say is too expensive and which Republicans think is too cheap—is expected to be released on Friday.

Here’s what we know so far: The administration is investing in 85 more F-35 fighter jets and requesting eight new naval vessels, down from 12 in Trump’s proposed budget. Also gone is the Overseas Contingency Operations account, a fund that provided backing for the U.S. war in Afghanistan and the fight against the Islamic State, which progressives have derided as a slush fund.

Carried away. The USS Ronald Reagan, the only U.S. carrier in the Asia-Pacific, is sailing to the Middle East to help the withdrawal of U.S. troops from Afghanistan, former officials confirm to SitRep. H/T to the Wall Street Journal’s Nancy Youssef and Gordon Lubold (a former FP reporter and SitRep author, by the way) for first breaking the story. 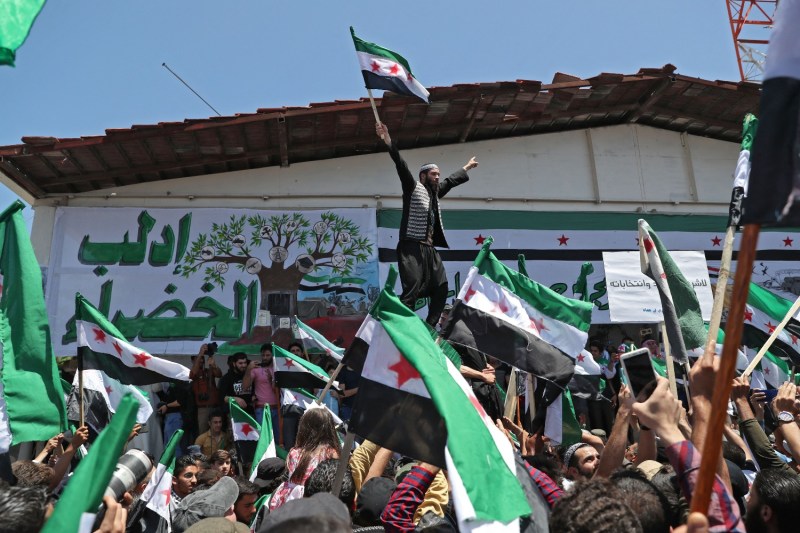 Syrians demonstrate against what they call illegitimate elections in the opposition-held city of Idlib, Syria, on May 26.OMAR HAJ KADOUR/AFP via Getty Images

Promises made. Bowing to significant pressure from Congress, Chairman of the Joint Chiefs of Staff Mark Milley told reporters on Wednesday the United States is developing plans to evacuate Afghan interpreters and others who helped the U.S. military by September.

But the last time the United States dangled so-called Special Immigrant Visas for Iraqis who helped America during the 2003 war, former translators faced long lines, kidnappings, and other violent threats as the Islamic State marched through the country. Whitney Kassel’s 2014 column is a good outline of the stakes at play as the United States leaves Afghanistan.

Thursday, May 27: Deputy National Security Advisor for Cyber and Emerging Technology Anne Neuberger speaks at the Center for Strategic and International Studies on the recent SolarWinds and Colonial Pipeline hacks targeting American infrastructure.

Tuesday-Wednesday, June 1-2: U.S. Secretary of State Antony Blinken travels to Costa Rica to meet with Latin American leaders on the migration crisis and other issues.

In case you didn’t know, the Biden administration is full of a bunch of rock ’n’ roll geeks. Secretary of State Antony Blinken has an undercover band. Climate envoy John Kerry once jammed with officials in Beijing. And Transportation Secretary Pete Buttigieg made waves with his piano skills on the campaign trail in 2019.

We want to know: What’s your ideal rock band—if you’re forced to only pick members from the Biden team? And, most importantly, what’s the band called? Send us your ideas.

NEW FOR SUBSCRIBERS: Want to read more on this topic or region? Click + to receive email alerts when new stories are published on United States, Africa