The U.S.-India Relationship Has a New Top Priority

The highlights this week: India’s foreign minister visits the United States with a focus on the pandemic, U.S.-Pakistan diplomacy sees a major development, and India’s government spars with Twitter.

The highlights this week: India’s foreign minister visits the United States with a focus on the pandemic, U.S.-Pakistan diplomacy sees a major development, and India’s government spars with Twitter.

How COVID-19 Could Shape U.S.-India Relations

The U.S.-India relationship is back on track after hitting some unexpected turbulence last month, when Washington was slow to respond to New Delhi’s catastrophic coronavirus surge. The White House has since more than made up for the delay. Senior officials, starting with U.S. President Joe Biden, have issued statements of support and solidarity. The administration signed off on large COVID-19 relief packages to India, and it intends to send vaccines as well.

Indian Foreign Minister S. Jaishankar is visiting the United States this week, where he has highlighted how easing the coronavirus surge is for now the top priority for U.S.-India relations, displacing the threat posed by China’s rise. While in Washington, Jaishankar is scheduled to meet with top U.S. officials, including Secretary of State Antony Blinken, Defense Secretary Lloyd Austin, National Security Advisor Jake Sullivan, and Indo-Pacific Coordinator Kurt Campbell. In addition to COVID-19, these discussions are expected to cover defense ties and multilateral cooperation.

Jaishankar’s meetings in New York and Washington have so far mostly revolved around increasing vaccine production and distribution, emphasizing an agreement reached during the Quadrilateral Security Dialogue leaders’ summit in March. Jaishankar is also pushing for an intellectual property rights waiver on vaccines—endorsed by Biden—and on other products such as medical devices and personal protective equipment. The foreign minister has met with corporate interlocutors, including a new global task force mobilizing donations for India.

The laserlike focus on the pandemic is understandable. The virus is still spreading widely in India’s rural areas, and only 3 percent of the population is fully vaccinated. The surge has also spawned a new public health crisis: an outbreak of rare black fungus, which affects the respiratory tract. Experts say people have been exposed while being treated for the coronavirus, particularly when using steroid treatments. The government has tallied nearly 9,000 cases in recent weeks, with more than 250 deaths—mostly among people who have or had COVID-19.

But amid these pandemic discussions, China still looms large for the U.S.-India relationship. There is a broader strategy behind the pandemic cooperation, even if the immediate goal is to get India’s surge under control. Efforts by the United States and India—in collaboration with the Quad partners, South Korea, and the European Union—to develop a robust global vaccine supply would push back against competing efforts by China (and increasingly, Russia). As the world’s top vaccine producer under ordinary circumstances, India has a comparative advantage.

Earlier this year, India exported millions of COVID-19 vaccines, while China’s own export program was slow to take shape. But Beijing eventually picked up the pace: By the end of March, it had exported 115 million vaccines, compared with New Delhi’s 63 million. China now has produced 230 million doses—more than all other countries combined. India hadn’t even exported 70 million doses before its alarming second wave obliged it to suspend exports and focus on domestic demand.

Contemplating how vaccine exports fit into strategic competition with China may be putting the cart before the horse. But when both New Delhi’s and Washington’s relationships with Beijing are the coldest in decades, it’s only natural that officials may be thinking about how to get an upper hand over their common rival.

June 2: The Carnegie Endowment hosts a discussion on the evolution and future of the Indian military.

June 3: The South Asia Centre at the London School of Economics hosts a discussion on the potential impact of cryptocurrencies in South Asia.

Washington-Islamabad diplomacy. The U.S. and Pakistani national security advisors met in Geneva on Monday—one of the only known in-person, high-level meetings between the countries under the Biden administration. Each side’s readout of the meeting used the same language, an unusual development that suggests a desire to coordinate messaging. Both statements described discussions on a “range of bilateral, regional, and global issues of mutual interest.”

The meeting likely explored counterterrorism cooperation options following the U.S. withdrawal from Afghanistan. Washington is trying to figure out how to maintain a counterterrorism capacity from outside the country, and it is looking into housing military personnel and assets on bases in neighboring countries. Pakistan is, on one level, a logical candidate: It borders Afghanistan and has agreed to U.S. basing arrangements in the past.

But Islamabad has repeatedly rejected the possibility, including several times this week. The move would not be popular among the public, and for Islamabad to even consider granting Washington’s request, it would insist on major U.S. concessions—such as the restoration of security assistance suspended since 2018. But with the Pentagon indicating that nothing has been ruled out, Islamabad’s public denials shouldn’t necessarily be taken at face value.

New Delhi’s Twitter war. On Monday, New Delhi police visited the offices of Twitter in the capital and in the nearby city of Gurgaon. The police, who fall under the control of the central government, said they sought more information about Twitter’s rationale for labeling a tweet by a ruling party spokesperson as “manipulated media.” The tweet accused the political opposition of trying to derail the government’s pandemic response.

Twitter’s offices were closed, prompting critics to question whether the government’s raid was an act of intimidation more than anything else. New Delhi has been sparring with Twitter for several months. Earlier this year, the company refused to comply with an order to shut down accounts that criticized the government. But it has become more accommodating. Last month, it removed dozens of critical posts about the pandemic response, and this week users noted that several anti-government accounts were withheld in India.

These troubling developments raise questions about government priorities during the pandemic. They also threaten to undermine an online platform that has played an essential role in helping Indians to secure vital public health assistance.

More trouble in Nepal. For weeks, Nepal has simultaneously faced a serious political crisis and one of the world’s worst coronavirus surges. The political crisis deepened this week, when the Nepali Parliament was dissolved after Prime Minister K.P. Sharma Oli was unable to form a new government after losing a confidence vote. Elections are scheduled for November, but campaigning will be a challenge due to the pandemic.

While the sheer number of COVID-19 cases and deaths in Nepal is dwarfed by neighboring India’s, the effects of the surge are tragically similar: oxygen shortages, collapsing health infrastructure, and people dying outside hospitals. Barely 1 percent of Nepalis are fully vaccinated, and for the next five months, the country’s fate rests in the hands of a lame-duck government.

Bangladesh’s new passports feature a major change. The travel documents have long said, “This passport is valid for all countries of the world except Israel,” but the last two words don’t appear on the new e-passports. The government hadn’t made any public comments on the change until Gilad Cohen, a senior Israeli official, tweeted about it on Saturday. The timing of the tweet was awkward for Dhaka, coming on the heels of Israel’s military assault on Gaza, which Bangladesh condemned.

Like all Muslim-majority countries in South Asia, Bangladesh does not recognize Israel. In response, Foreign Minister A.K. Abdul Momen said the move does not represent a change in policy and that the travel ban to Israel remains in place. He explained the change was “made to maintain the global standards,” as no other country’s passports feature the “except Israel” clause. (This is not technically true: Pakistan’s passports include these words.)

Cohen’s tweet called on Dhaka to open diplomatic ties with Israel. But that is unlikely and not just because of a lack of receptivity to the idea in Bangladesh. Dhaka wouldn’t want to risk damaging its relations with Muslim-majority countries, especially those that host Bangladeshi workers. Remittances are a critical contributor to the country’s economy.

“Probably, this is all going to shit. But we also have confidence that we’ll have political cover, that no one’s going to give a shit.”

—An anonymous source articulating to the Daily Beast the Biden administration’s view that the U.S. government won’t suffer politically if there are “horrifying developments” in Afghanistan following the U.S. withdrawal because the U.S. public strongly supports it. 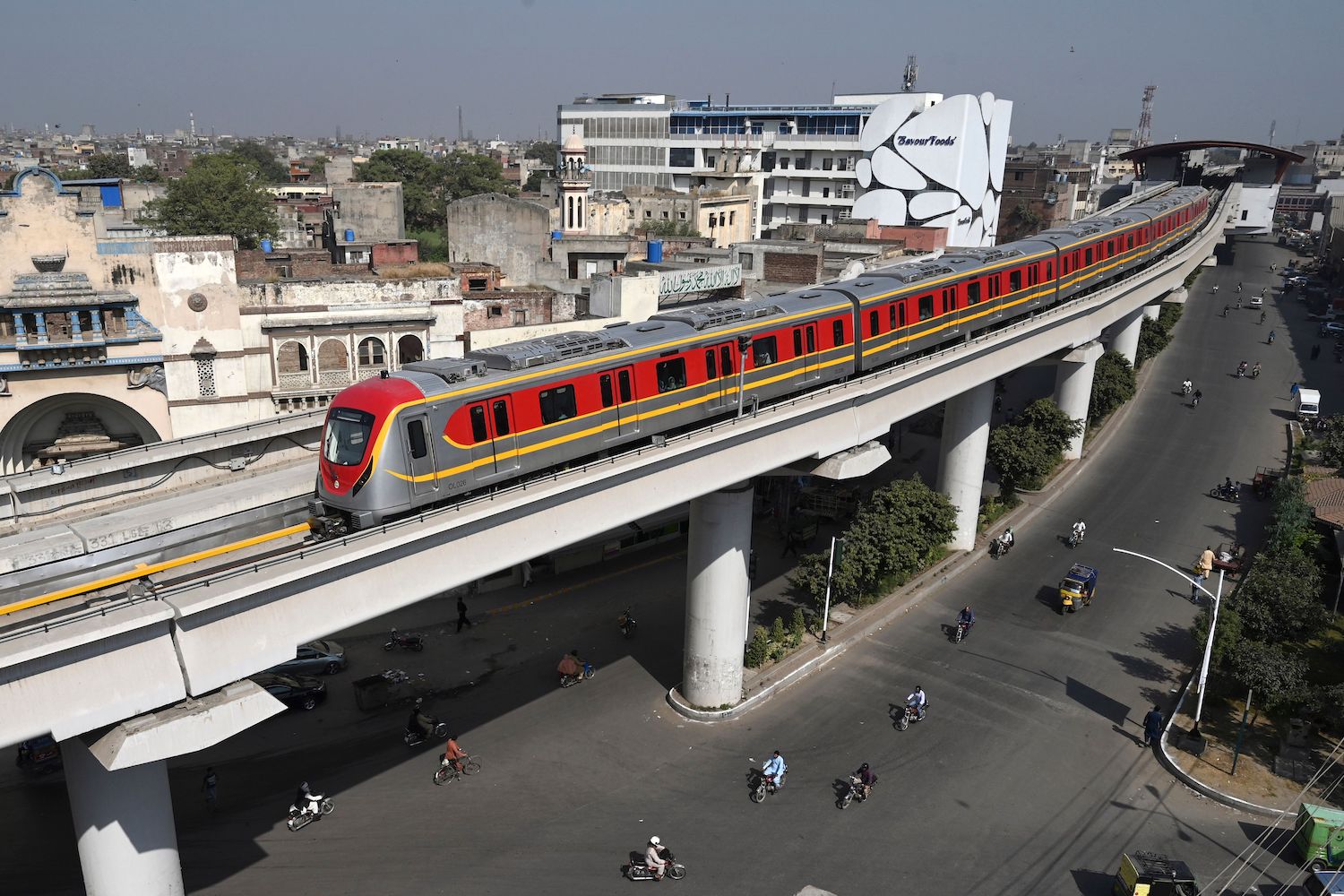 A newly built metro train, a project planned under the China-Pakistan Economic Corridor (CPEC), drives through on a track in Lahore, Pakistan, on Oct. 26, 2020.ARIF ALI/AFP via Getty Images

The scholars Katharine Adeney and Filippo Boni have published a fascinating new paper for the Carnegie Endowment on the China-Pakistan Economic Corridor (CPEC), the Pakistan component of Beijing’s Belt and Road Initiative. They argue that, contrary to popular belief, decisions regarding CPEC have not been wholly dictated by Beijing but are often guided by Islamabad’s own priorities.

“Examining the domestic contours of the CPEC shows that Pakistani actors have wielded agency in important ways throughout the process, while Chinese actors have at times accommodated key Pakistani demands,” Adeney and Boni write.

Writing for Tolo News, Aisha Khurram, a student and activist at Kabul University, calls on young people on all sides of the conflict in Afghanistan to launch a new grassroots effort that that supplements the “top-down approach” to the peace process and “can give local people a sense of ownership and responsibility, reduce misunderstanding, heal trauma, and provide a conducive environment for reintegration.”

The Pakistani author Bina Shah writes for Dawn on controversial comments about Israel by Pakistan’s foreign minister. She argues that Pakistani political figures “must educate themselves on what constitutes antisemitism in the international arena.” “This is not the right time for Pakistanis to revert to what are widely seen as antisemitic tropes and stereotypes,” she writes.

Teesta Setalvad, an Indian activist, writes for the Indian Express about how COVID-19 has exposed the dreadful state of Indian prisons. She advocates for other punitive measures when possible. “Given the context of the abysmal conditions of Indian prisons and the absence of political will in proper monitoring, the option of house arrest must be seen as a positive opportunity,” she writes.